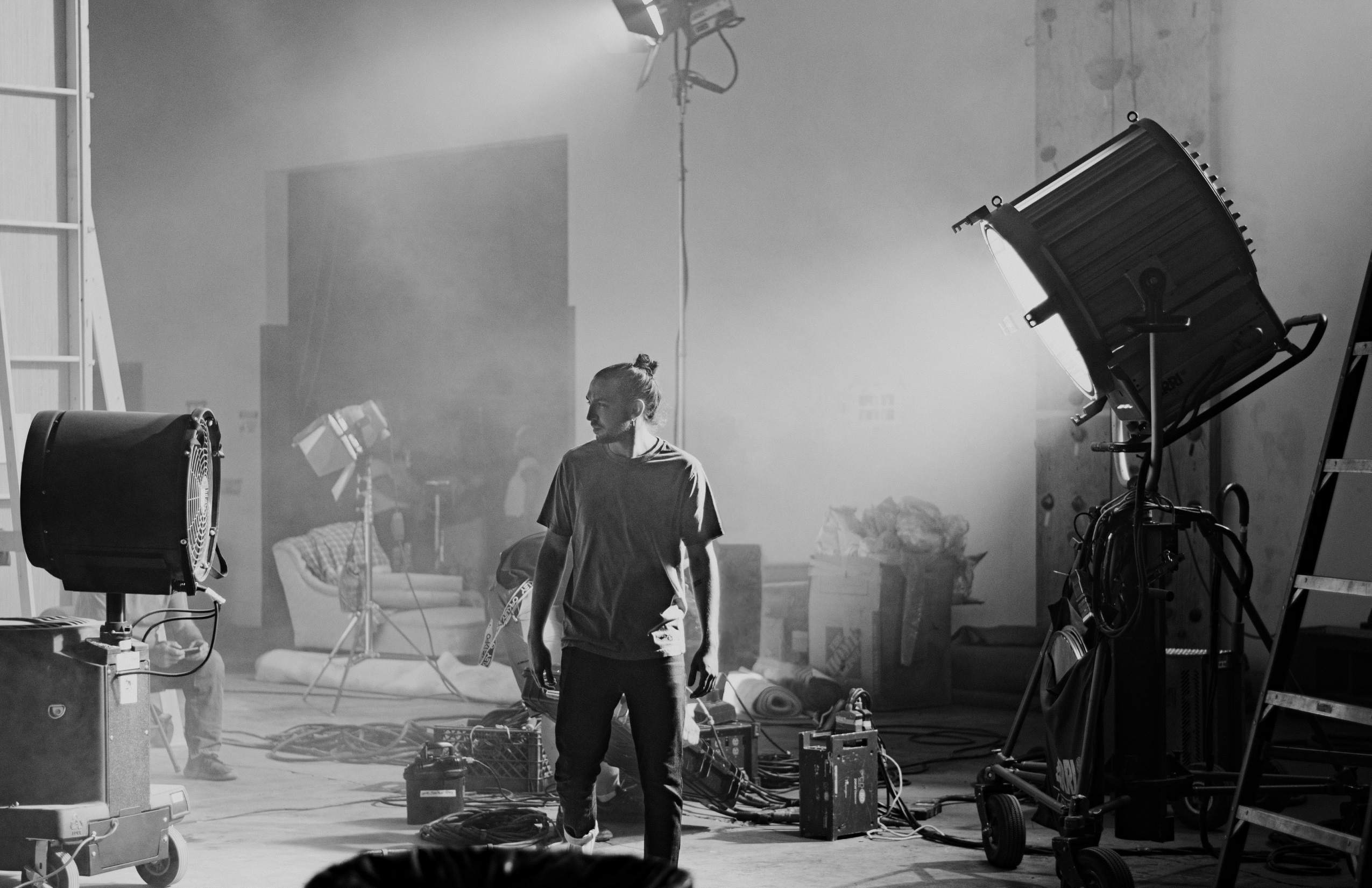 Echo Boomers is a chaotic romp with an activist twist — and to hear writer and director Seth Savoy tell it, it’s about to be your favourite film of the year.

The film stars Patrick Schwarzenegger, Alex Pettyfer, Hayley Law and others as a team of twenty-something bandits who break into the homes of the Chicago’s elites, sell their possessions for personal gain and leave a political message in their wake. All of their actions occur under the watchful eye of one Mel Donnelly, portrayed in the film by Michael Shannon — story elements that come together to make a supremely fun film.

Echo Boomers is now available in cinemas and via video on demand, but Schön! managed to talk to Savoy before the release to get some insight into the filmmaking process.

Hello Seth! Echo Boomers is coming out soon. How are you feeling about that?

I’m hyped, dude. I’m hyped. We did a kind of a first preview drive-in last night in Chicago for those who can’t go to the theater for health reasons… There was almost a tornado in Chicago that night and it was super rainy, but they packed it out. Everyone’s car was wet from the rain, and it just added this level of intensity that I really liked.

Obviously the idea is really tied to the present moment. Did you know you wanted to make a heist movie from the beginning? Or did that naturally come about given the ideas you were working with?

So the idea for the film started in 2013. I had just graduated from film school in Chicago, and I’d spent a good amount of savings. I got to the finish line, and I realised there’s definitely no shortage of filmmakers. Because of that, I kind of felt like I played by the rules and I did what everyone told me, and then I got to the finish line and nothing was there. And then, serendipitously enough, I started seeing these articles in Chicago about college kids who were breaking into homes and it just — I don’t know. I could feel their frustration. I understood it. I got where they were coming from in a really weird way. I just kind of ran with that idea, and then I met a producer named Sean Kaplan. Sean is the one who brought Michael Shannon on. From there, it’s history. 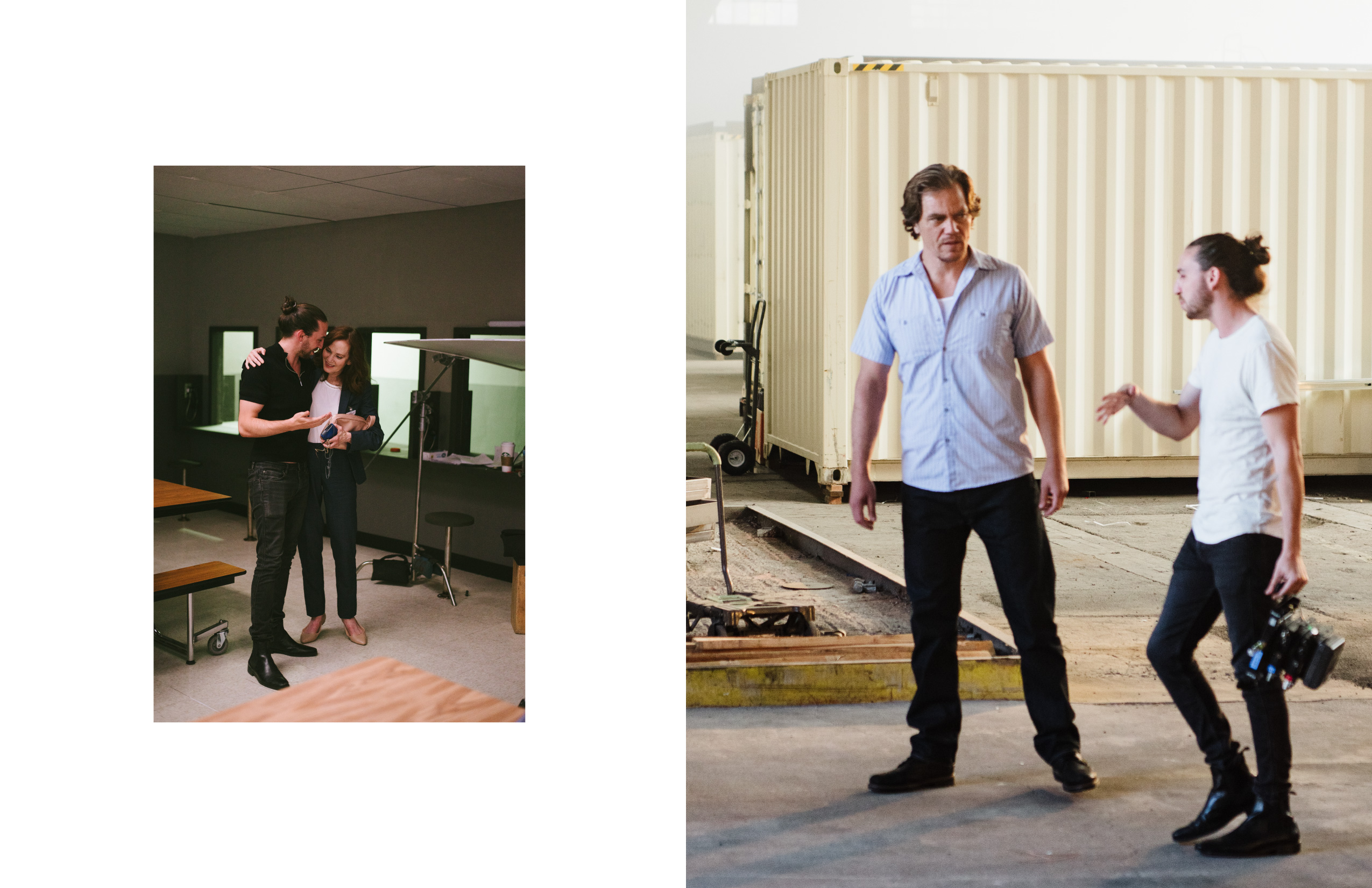 I don’t want to read your reviews to you, but I pulled up a Chicago Sun-Times review of the film that opened with the line, “The young actors playing activist burglars in Echo Boomers must have had a blast making this movie.” I want to do a quick fact check on this: was it in fact a blast to make this movie?

Oh, dude, it totally was. And first off, I’m definitely thankful for that review. You know, they tell me not to read reviews, but I read them. It was a blast. I mean, how can you not have fun destroying all this stuff for work? [The actors] were kind of depicted as these badasses breaking into homes, and they had a ball doing it.

What was something important that you learned through the process of making your first feature?

When you have people like Michael Shannon and Leslie Ann Warren showing up — and this is your first time doing something — it’s pretty intimidating. The biggest thing that I learned is that casting is absolutely everything. Casting is 80% of directing. Once you have people like Michael Shannon and Alex Pettyfer and these guys coming in, you honestly don’t have to do much because they do it so well… I really learned a lot from Michael Shannon and Leslie Ann Warren because they were so understanding. Even though Mike comes off as this really scary guy, he actually has a lot of patience and he really respects the process. He really helped me a lot in this one. 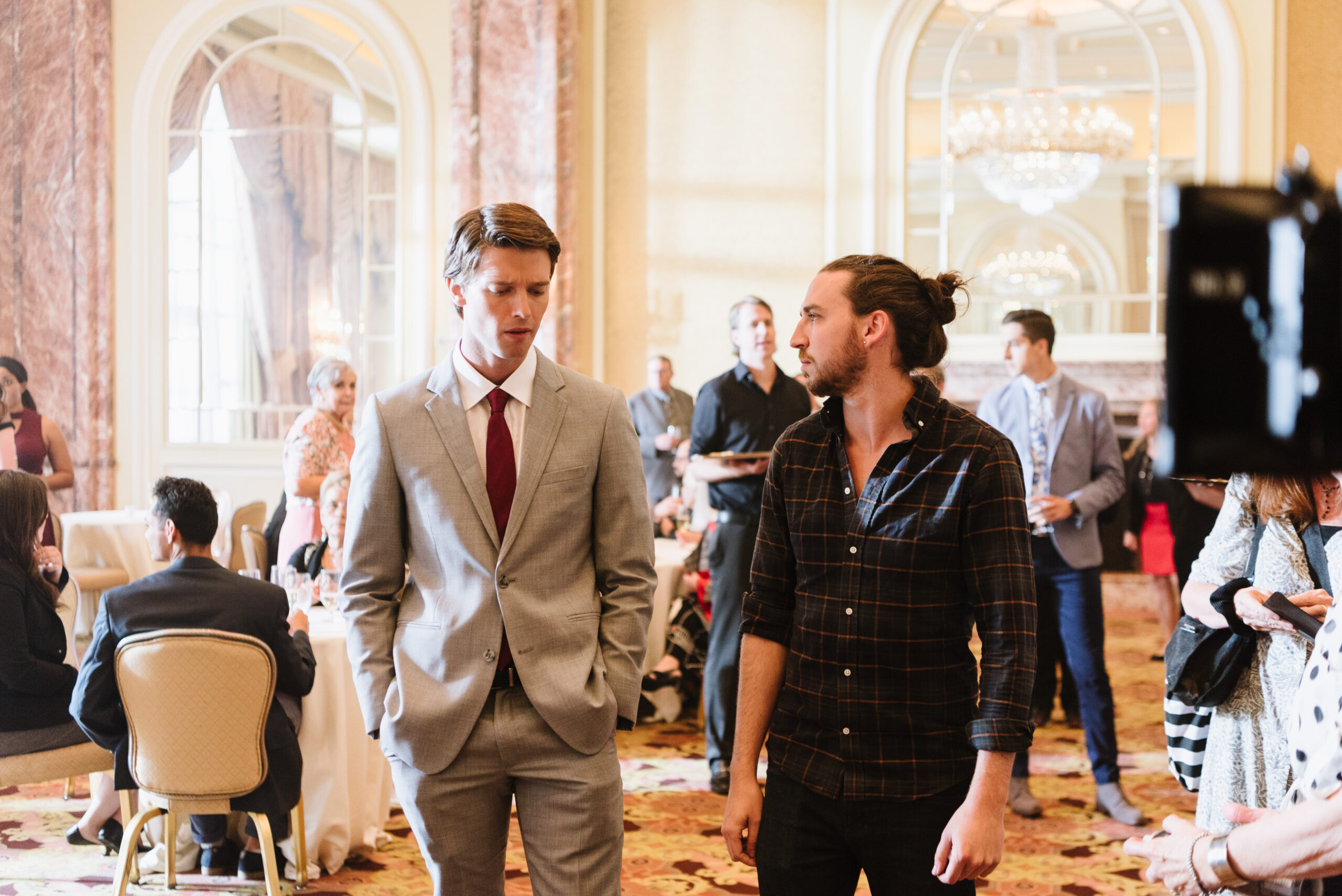 I know you shot some parts in Utah, but why did you fight to make Chicago really play a character in the film?

Chicago is such a secret in the film industry, and I don’t quite know why. It has such an amazing look. No city in the world looks like Chicago on film, and I think that comes across in Echo really well. But more importantly, the tools that Chicago has to make films are I believe better than any other city in the world. If you just look at the United States, New York is so big, and it’s so hard to move in the city. Shutting down streets and all that stuff — it’s such a big deal. And if you go to L.A., everything’s so tapped. You can’t meet a single person who hasn’t heard, “Hey, invest in my movie!” Chicago is the complete opposite. Chicago has Chicago Media Angels, which is a big investment group here, and a lot of the executive producers on Echo Boomers were just random guys who had never been asked to invest in a movie before. And they loved it! They were all about it, and they’ll definitely do it again. It’s the easiest place to make a movie, and I just don’t understand why more people don’t do it.

I hope there’s more of it in the future. Chicago is a very cinematic city.

Absolutely. Going back to the film, let’s talk about the characters. They each have their own issues, but at the film’s core, they’re definitely at fault for their actions. Were you ever tempted to try to make them more sympathetic?

Yeah, I was, and we made a conscious decision on that. I really want to make movies that are different, and I want to make movies where it’s okay if people aren’t attracted to the characters immediately. Because of that, I think a lot of them will stand the test of time… It’s breaking the standard of “you have to like your main characters”. I completely disagree with that. I think it’s just as strong if you dislike them. Life isn’t protagonist and antagonist — there’s a whole bunch of grey area, and that’s what I wanted these characters to feel like. 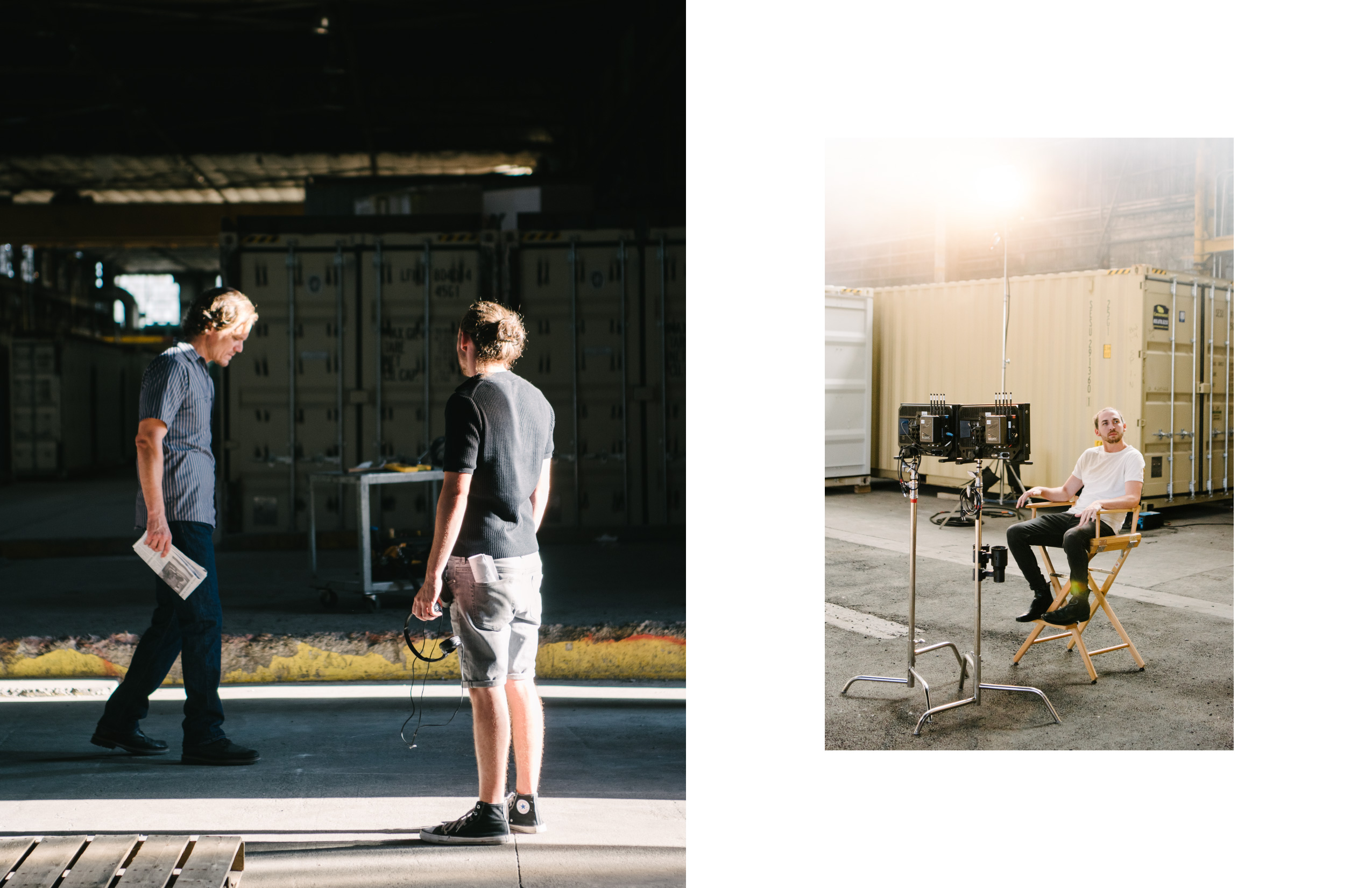 Forgive me for the obvious question, but we’re seeing heist movies make a really big comeback in recent years. Why do you think more people are being drawn to this style of movie?

I think it has a lot to do with where we are as a nation. I felt this as we were revving up to the election, and I think Paramount and Saban choosing for this movie to come out the week after the election was no coincidence… [Echo Boomers] is kind of masked as a heist movie, but realistically, it’s political commentary. It’s fun and flashy political commentary. Timing was kind of everything for this one, and I’m really happy that it’s coming out right now.

Being a filmmaker is really a big, collaborative process. Who were some of the people who helped you most in the creation of this movie?

Jason Miller was my co-writer. He’s the guy who was there before anyone was ever attached to this movie, back when it was just that dumb idea you throw to your friend and hope that it sticks. Every single day Jason and I would wake up and write for two hours. He actually lives in Arkansas still, so we Skyped every single day. Without him, I mean, it never would’ve happened. Also, Mike Ware, Byron Wetsel and Sean Kaplan are the three producers who really put this together, and Sean found it first and brought it to the others. But without them, we would have never even gotten to the shooting stage.

Echo Boomers is currently in cinemas and on Video On Demand.