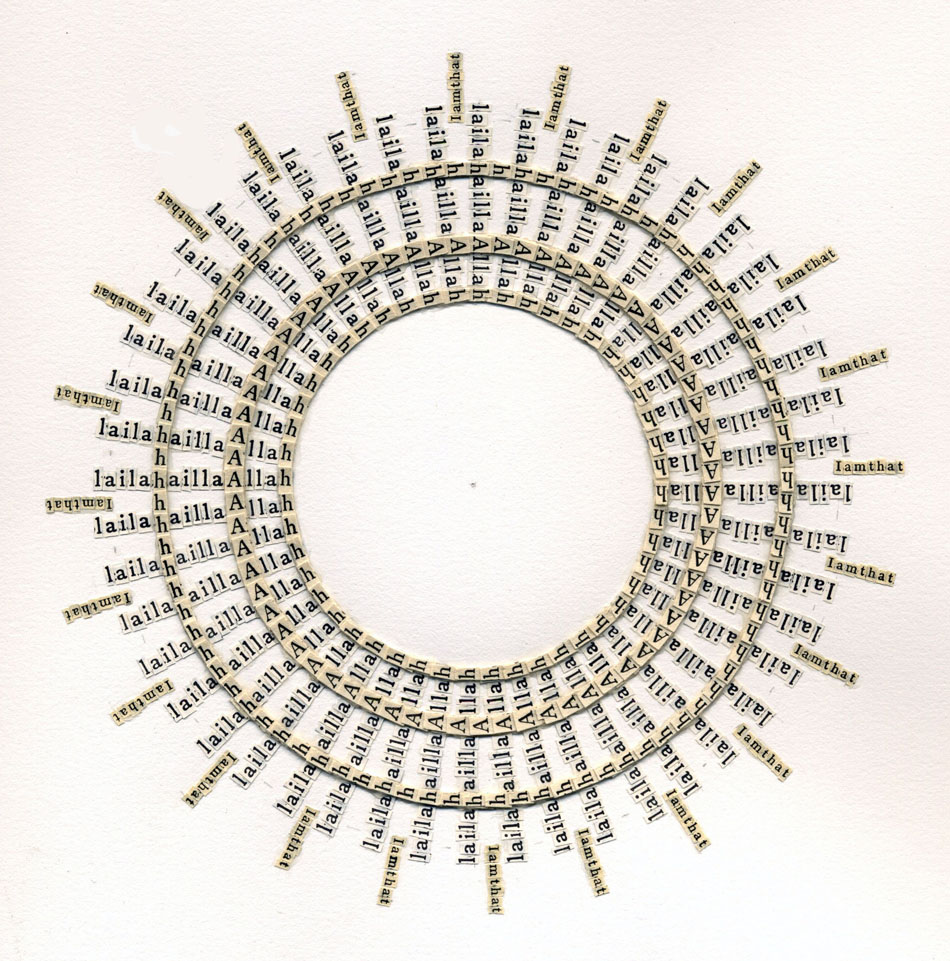 Art gallery Scream London showcases Telling Tales, a group exhibition featuring local UK and international artists whose crafts dissect and reassemble words from different languages. Schön! had the opportunity to talk with two artists, who both use the printed word in their artwork, but in completely different ways.

Meg Hitchcock does more than examine the word of God; she slices and dices the heart of religion to highlight the universal forces holding society together. Hitchcock literally cuts letters from holy books to create other sacred texts. The Koran is transformed into the Bible, the Bible turns into the Bhagavad Gita, and so on.

By playing with the physical properties of language, Yael Kanarek studies how linguistics function in space and time. She gravitates towards the transitional state between painting and sculpture. Using the Internet as a system composed of natural and computer languages, Kanarek’s text works harness a variety of languages to engage the global collective.

While both Hitchcock and Kanarek allow language and words to form the organic shape of their artwork, their results are drastically different. Both artists are from New York City, but they feed off the concrete jungle in dissimilar ways to tell their own individual tales on our multilingual existence. Listen. 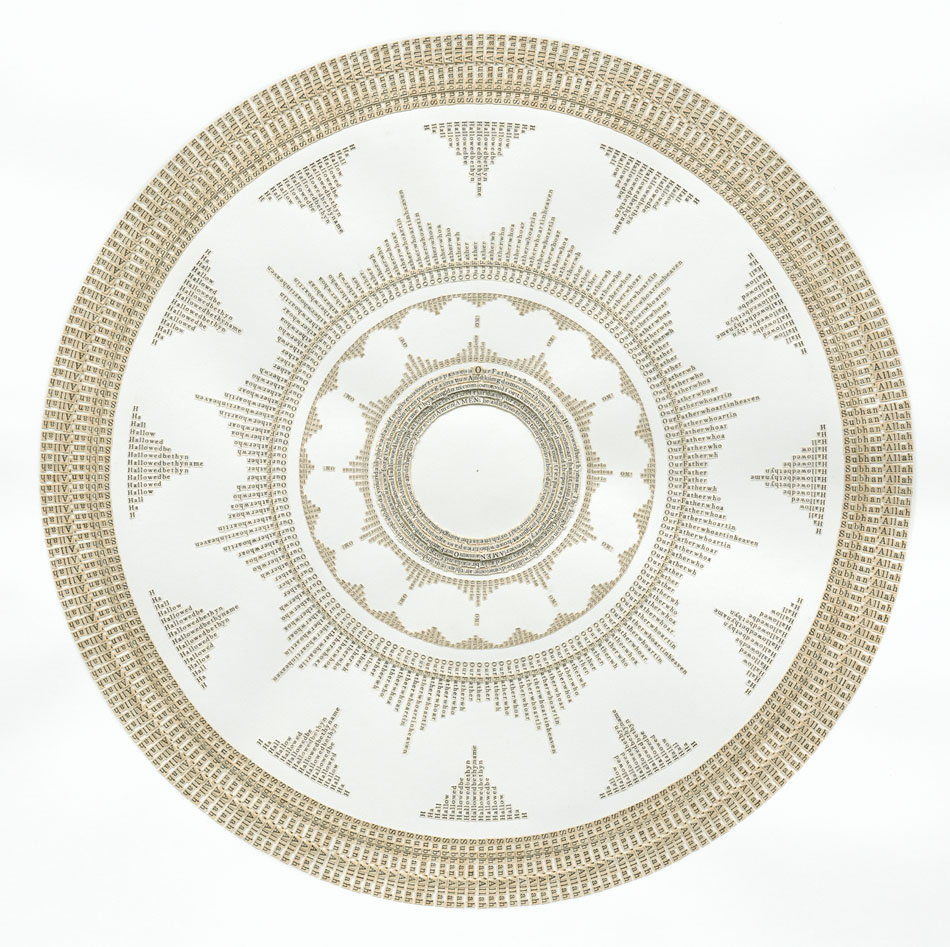 Circles are very prominent in your text series. Why is that?

The mandala is a universal symbol, used by all religions to express unity, divinity, and completion. Psychologically, it symbolizes the individual in his or her wholeness, the highest realisation of the Self. As a visual element, it’s a way to make patterns that are pleasing to the eye. The phrase is divested of meaning, thus the “solidity” of the belief system is challenged. The words that are revered as sacred are really just letters, shapes, and ink on a page.

By literally dissecting these religious texts, what similarities do you find in them? Differences?

It’s amazing how much the Koran and Bible have in common. I think that every Christian should be required to read the Koran, and each Muslim the Bible, so they could see the overlap. But the most amazing similarity that pops out at me is the humanity that shines through all sacred writings. Each religion offers an expression of the profound love and compassion that seems to be embedded in the human condition.

How is today’s world influencing your work?

Our culture is facing self-imposed extinction. While it’s not likely that anyone alive today will witness it, the very fact that we’re conscious of it has an enormous impact. While we transition into the next phase of the planet, we’re shifting from religious dogmatism to interfaith tolerance. My work is an expression of the new spiritual paradigm, in which we loosen the death grip on our view of “the way things are.” By bringing together the sacred writings of diverse religions, I attempt to undermine their authority, and speak to the common thread that weaves through all scripture.

What are your feelings on the modern holy wars?

Our holy wars indicate a dramatic decline in civilization, but I don’t know that they’re any worse today than they’ve ever been. Our religious conflicts are tame compared to the Spanish Inquisitions or the Crusades. Given the choice, I’d prefer to be killed by a rogue drone than thrown to the lions by a sadistic Roman emperor. But the impetus behind these horrific wars is the same as it was two thousand years ago; nothing has changed. Religion has always been the ultimate weapon of mass destruction.

What upcoming projects do you have?

I have an upcoming show in New York City, as well as various venues in other parts of the country. My text work is becoming increasingly political, as I continue to explore the parallels between the Bible and the Koran. They seem to speak most profoundly to the current global situation. By bringing these two monumental sacred texts together, I feel that I’m doing my small part in bridging the gap between ideologies. 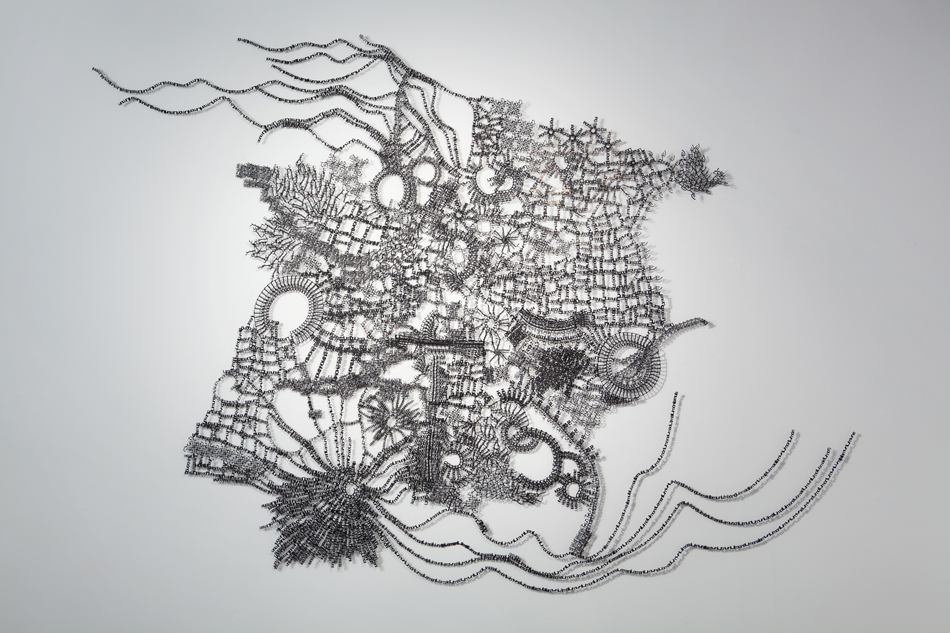 Describe your creative process from why you choose a certain text and color, to how you put it together, to your thoughts on the final product.

Often a work will emerge as an exchange with an imaginary viewer – you, me, us, them. The work is a vessel for a relationship. A point of entry. An invitation to dance. Sometimes a desire for a work comes from a need to challenge my confidence

Deeply Concentric – on view at Scream London, started from a MoMA ad that I encountered in the subway. MoMA used a small Kandinsky watercolor study to advertise the Inventing Abstraction exhibition. I wanted to make a piece in color and was searching for a palette. As we were crossing the East River, I was playing “Eeny, meeny, miny, moe” with circles in the ad and landed on the middle. Later, I noticed MoMA using the same small watercolor on building-size ads. That change in scale from the intimate to the mega is a phenomenon of our time and linked directly with the increasingly ubiquitous communication technologies.

In Deeply Concentric I used the word white in nine languages. I used this word combination in several works in that past few years. ‘White’ has a great range of associations. Imagine white, you know, right now – close your eyes and imagine white. It’s a boundless space. Whiteness in all directions. Kandinsky wrote about the limitless space of the imagination. The spiritual infinite.

As much as I’m interested in aspects of global trade and other forms of exchange (like conquest), spirituality has also been a core interest. I created a circular piece in gold pigment. Once I hung it on the wall it became golden halo. I decided to put it in service, called it “Sanctify Thyself” and invited people to Instagram self-sanctifications using the hashtag #sanctifythyself. Placing an artwork in service unsettles its value system – it moves between foreground and background – the viewer examines the work and then turns her back to it for the sanctification.

I like this kind of disruption. For me the art moment and the divine experience are the same and as such can be met everywhere.

Two of your works in Scream London are circles. The “Lemon” piece breaks away from geometry. How do you determine shape and depth in creating your art?

Lemon is made with forty languages in which the word ‘lemon’ has nearly the same sound. The similarity holds memory of transactions and conquest on a global scale. The lemon originated in Assam, India. Revered in their culture, the Arabs in the Middle Ages distributed the lemon tree.

The organic shape of the artwork came from organisation of the words directed by their geometry. Repetition formed into pattern. The overall shape is driven by the shape of the ‘lemons’ in the respective languages. 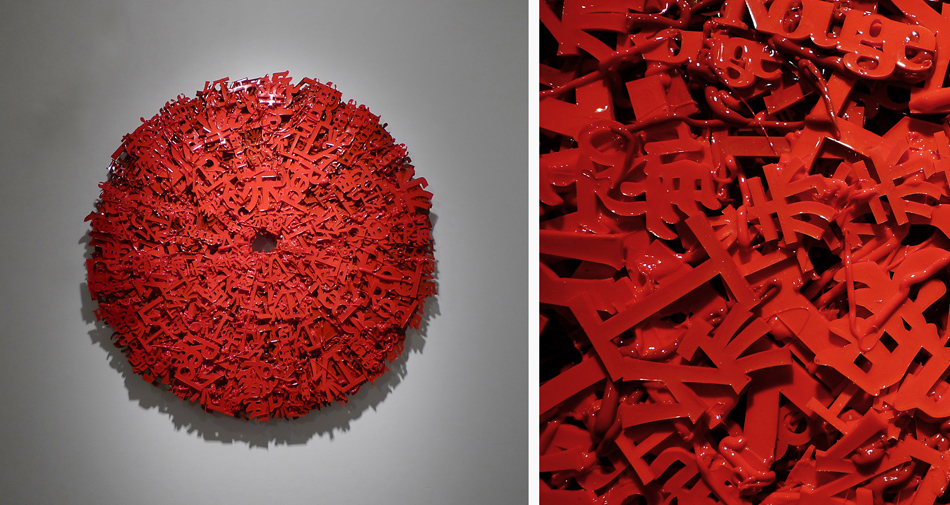 Your work has incredible texture. Why did you create your pieces in 3D?

For me, language exists in space-time. It’s completely physical. The preverbal is the void center of the circular pieces. But once in language, words have shape, sound, texture and taste. I gravitate towards the transitional state between painting and sculpture. It started in school, bolting paintings into sculptures. I’m attracted to the spaces between languages, media, gender, and the space between what we see and what we imagine.

Your work breaks different languages down and connects them to form a wholly unified piece. In a way, you create another language. Who are you speaking to?

I don’t often break down the language but rather break down a concept into multiple languages.

How is today’s world influencing your work?

I belong to the generation who lived before the Internet and fully embraced it as soon as it became available to the public. All my work refers to its social and psychological impact with a focus on emerging global identity.  A newer body of work looks at our experience of ‘time’. I designed software that synchronizes video and audio with the computer clock. I create moving-image assemblages that tick on the seconds, minutes, hours, days months and years. They tell not the time but narratives of incremental change through keeping time.

Going back to the global thought, standard time is probably the first world-wide agreement. If you look at the map of time zones, you find a pretty wacky implementation of an elegant idea. That’s our reality.