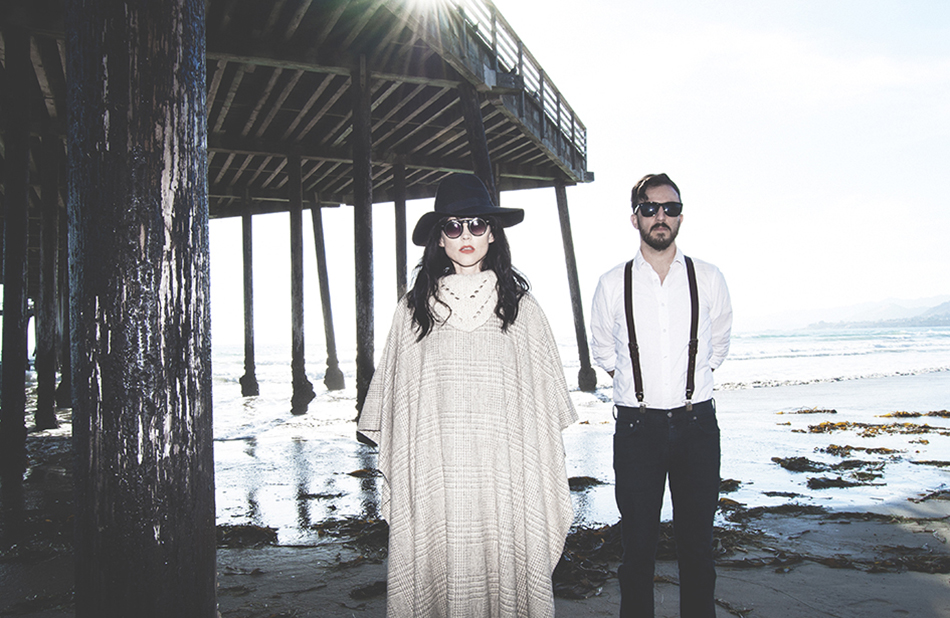 Hailing from California, Angela Gail and Jeffrey Jacob are the driving duo behind In The Valley Below. Their inimitable sound made its way to the UK last year when they released single Stand Up, and have now released their debut album, titled The Belt. Schön! caught up with the duo to discuss all things related to pop, rock & roll and, last but not least, Phil Collins.

With signature monochrome get-up (braces for him and vintage lace dresses for her) featuring prominently throughout their visual works and performances, In The Valley Below are easily distinguishable from the panoply of bands out there. The duo take you to an out-of-time dimension, far West to the coasts of California. Introduced to European audiences when accompanying White Lies on tour, In The Valley Below have now returned with The Belt, an 11 track album. When asked how they would define their sound, vocalist Angela Gail steps forward. The Belt, released April 7th, comes under the guise of a modern power-ballad.  “What inspired us was the melodies of old power ballads, and so we wanted to bring back the power-ballad, but in our own way.”

From there unravels a wide breadth of themes, ranging from nostalgia-infused Take me Back, to more spiritually-orientated tracks. “Religion fascinates us in the sense of the power that it has over people, and what it drives people to do, good and bad.” This doesn’t mean that you can expect to see Madonna levels of religious iconography. In The Valley Below have their own ways of communicating their vision, as Jeffrey Jacob points out, with a laugh: “We make the melodies accessible enough that people get into it, and then sneak some dark shit in there.”

Taking inspiration from the greats, the duo join in unison to praise their ultimate icons and models, Phil Collins and Peter Gabriel. In fact, an innocent shout out is voiced by Gail: “We’d love to go on tour with Phil Collins, and Peter Gabriel. Separately, or together,” before Jacobs chimes in : “If we could get them together, in the same room, that would be really good.”

The duo in fact quotes Phil Collins as one of the main inspirations which crafted and formed the band. “In the Air Tonight was one of the first sparks that we used to start creating In The Valley Below. It’s such an amazing song, and we wanted to continue that feeling that he creates.” The name, on the other hand, comes from a folk-rock great : “That came from a Bob Dylan song, one of our other favourite songs, One more cup of Coffee, and he sings about going to the valley below, and you never know what that means. To me it always sort of meant leaving forever, or death. You don’t know. When we say we are In The Valley Below, we’re talking about ourselves, and everyone in the room, being here at this moment, you know, in the valley below, wherever that is to each person.”

Lyrically, The Belt takes the listener on a journey, such as with the sun-drenched single Peaches, the first single released at the same time as the album. Angela Gail relates how they met in California, and highlights how it has unintentionally influenced their creative process. “I think that moving to Los Angeles, and everything about it, with the ocean, the desert, the people trying to make it … I think those things influence our lyrics, all those things come in subconsciously.” Jacobs takes the relay and explains how travelling has become an integral part of their lives, not only with touring, but also in a musical sense. “I like the idea of taking people places lyrically, if you can make them imagine a scene or just give them an outline. We like to give the listener the room on the lyrics, we try not to say anything too specific, so that there’s not just one interpretation. It’s nice to have the space to give people the space to use their own imagination.”

Since their first releases last year, In The Valley Below have most definitely been places, with notably a second year at SXSW under their belt, which felt like a bit of a coming-home, now that they’re SXSW alumni. Angela Gail describes the experience as: “a summer camp for bands. It’s like a big summer party, everyone’s there, together. There’s no glamour at all, you know, you can keep your ego in check because you’re pushing amps through the streets.” In contrast with the rock & roll grime of SXSW, a more recent appearance on the David Letterman show projected In The Valley Below into the TV limelight. When asked how they got through it, Jacobs is quick to answer: “With the help of a little whisky,” before laughing. “It was kind of nerve-wrecking, and exhilarating. We felt very honoured to be there. I think it’s called the Ed Sullivan theatre, where we played, and that’s where the Beatles first played in the States. There’s so much history there that it’s intimidating.”

Before parting ways, we quiz the duo for their ultimate rock & roll track. Jacob is first to reply, as the guitar player of In The Valley Below, he explains he’s a big fan of David Gilmour, so would have to go for any track by Pink Floyd. Angela Gail goes for another British great, with Heartbreaker by the Rolling Stones. That’s enough rock & roll to keep us going all night long.

In The Valley Below’s debut album The Belt is out now.

Click the links below for the latest issue of Schön! Magazine
Schön! in glossy print
Download Schön! the eBook
Schön! on the Apple Newsstand
Schön! on Google Play
Schön! on other Tablet & Mobile device
Read Schön! online