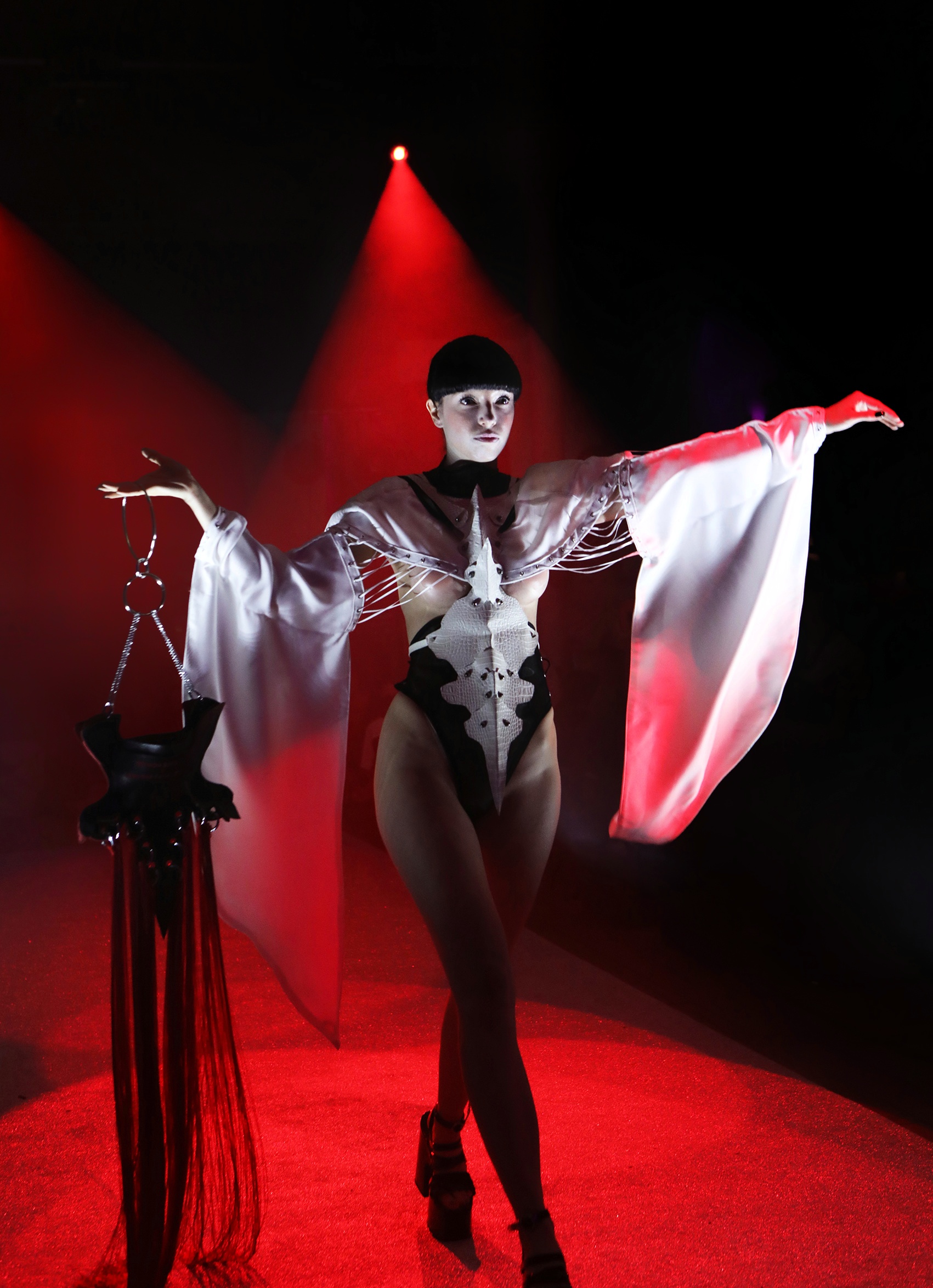 Fashion, music and film merged to form a spectacle that could only take place in Berlin at the 10th anniversary of the Berlin Music Video Awards (BMVA) which was held in-person following a 2-year physical hiatus. While the 4-day event was meant to celebrate and award the creatives behind the music videos, it also functioned as a 4-day long party – where faces from the surrounding creative industries gathered in an exchange of ideas and drink tickets: from independent film directors chatting about their latest projects, an AI-manipulating visual artist showcasing his works, to even Burlesque performer Katrin Gajndr taking to the stage.

What’s refreshing about the BMVA’s is how the awards show is fully committed to an equal-level playing field regarding all of their submissions. Because of this, you’ll find globally-recognised names like The Weeknd’s Gasoline paired up against the more obscure HVOB’s Eyes Alive.

This year’s awards show was held in Kreuzberg’s Club Gretchen, a music venue and event space located in an old factory area that served as a Prussian military stables in 1854. Upon arriving at the structure, one would have never guessed an event was taking place, let alone an international awards show. From the outside, one would assume it’s just another abandoned Berlin building urbexers would be excavating for old artifacts and WWII memorabilia. Enter inside, and one finds a club decorated with bricks and columns, filled with the many eccentric characters that partook in this year’s BMVA’s — a testament to how places still feel underground in the German capital. 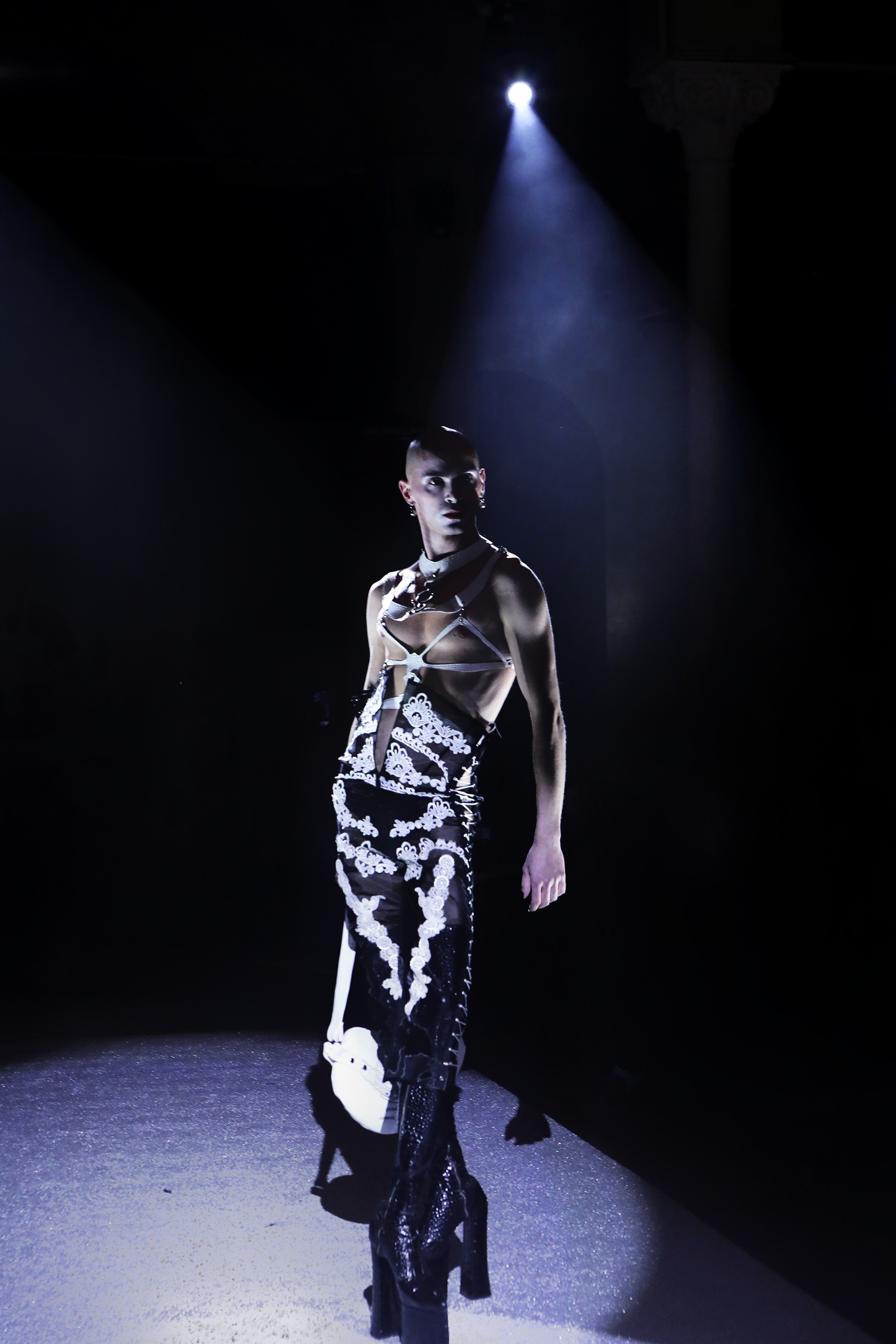 Throughout the event, everybody from musicians, artists, agents, filmmakers and their collaborators, to fashion designers, models and influencers alike put on their campiest get-ups for one big music video watch party. Dress-wise, it looked as if a warehouse full of thrifty, second-hand pick-ups and your favourite luxury fashion houses got tossed into a blender. Both Friday and Saturday had their juxtaposing dress codes, with Friday’s being “Fetish/Dark ” and Saturday’s “Glam/Elegant”. 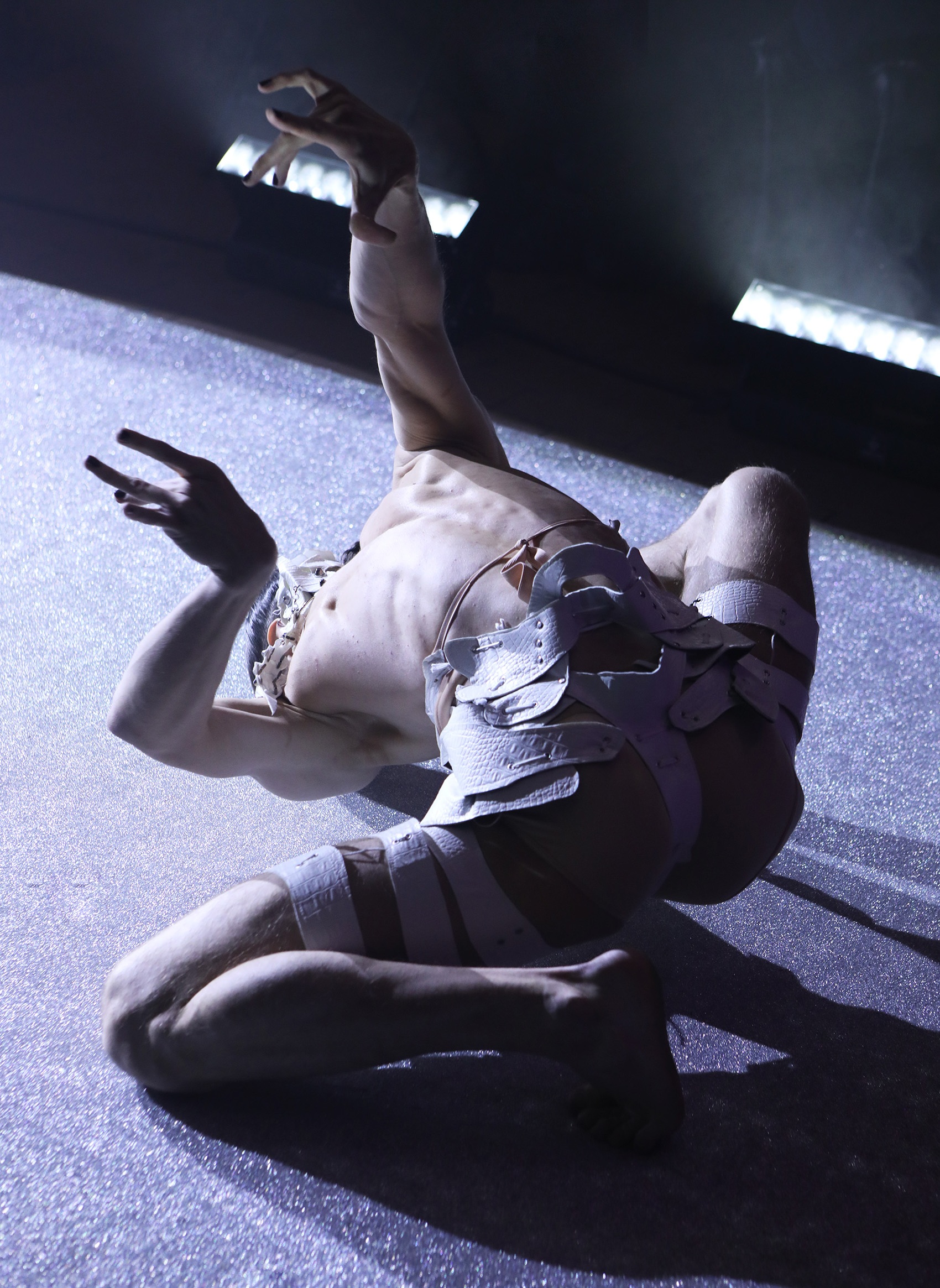 Saturday’s festivities were the main event, consisting of the fashion show and the award for Best Music Video. Various takes on glam were seen around club Gretchen as the festival went from pitch black to colourful glamour in high-definition.

The BMVA’s have always held fashion in high regard, noting it as an essential element of music videos. This year’s fashion show hosted six different designers, with each presenting a capsule collection of around 5 outfits. The first to take the runway was Italian costume designer Flavia Guilia Tomassi, most notable for the bespoke outfits she creates for television and theatrical performance events such as Eurovision. She sent a latex-clad dominatrix in black accompanied by an entourage of slaves in rose-pink, shimmering gowns and embellished masks down the runway that created total anonymity amongst the crew. They gave a raunchy performance, and it wasn’t long before the gowns were removed, revealing victorian-like, gimp uniforms of harnesses, billowing ruffles, and black lace. Following Tomassini was a collection by Louise O’Mahony’s brand L.O.M – a Berlin and Brighton-based label where every look was an explosion of colour, an embodiment of an acid trip. Like a course in designer rave-attire, the collection featured flowery psychedelic patterns in tie-dye and neon hues, along with ruffles and shapes reminiscent of an underwater forest.

The third to present was Marco Ward, the Paris-based designer behind the brand Minimal Waste and whose hand-woven netted garments are composed of upcycled junk and tires he retrieves that would otherwise be burned. True to the brand’s name, his collection had a minimal colour palette of black with hints of red. Furthering the brand’s environmental ethos, the dresses and matching two-piece looks felt post-apocalyptic and sci-fi, as these discarded materials which cannot be broken down return from the grave, taking on an aggressive geometric form. Continuing in this otherworldly, science-fiction direction was local Berlin-based costume designer Charlie Mintson, where we saw nature and robotics collide — from metallic armored corsets on what looked like an android dominatrix to muscular male models adorning flowers on their chests. 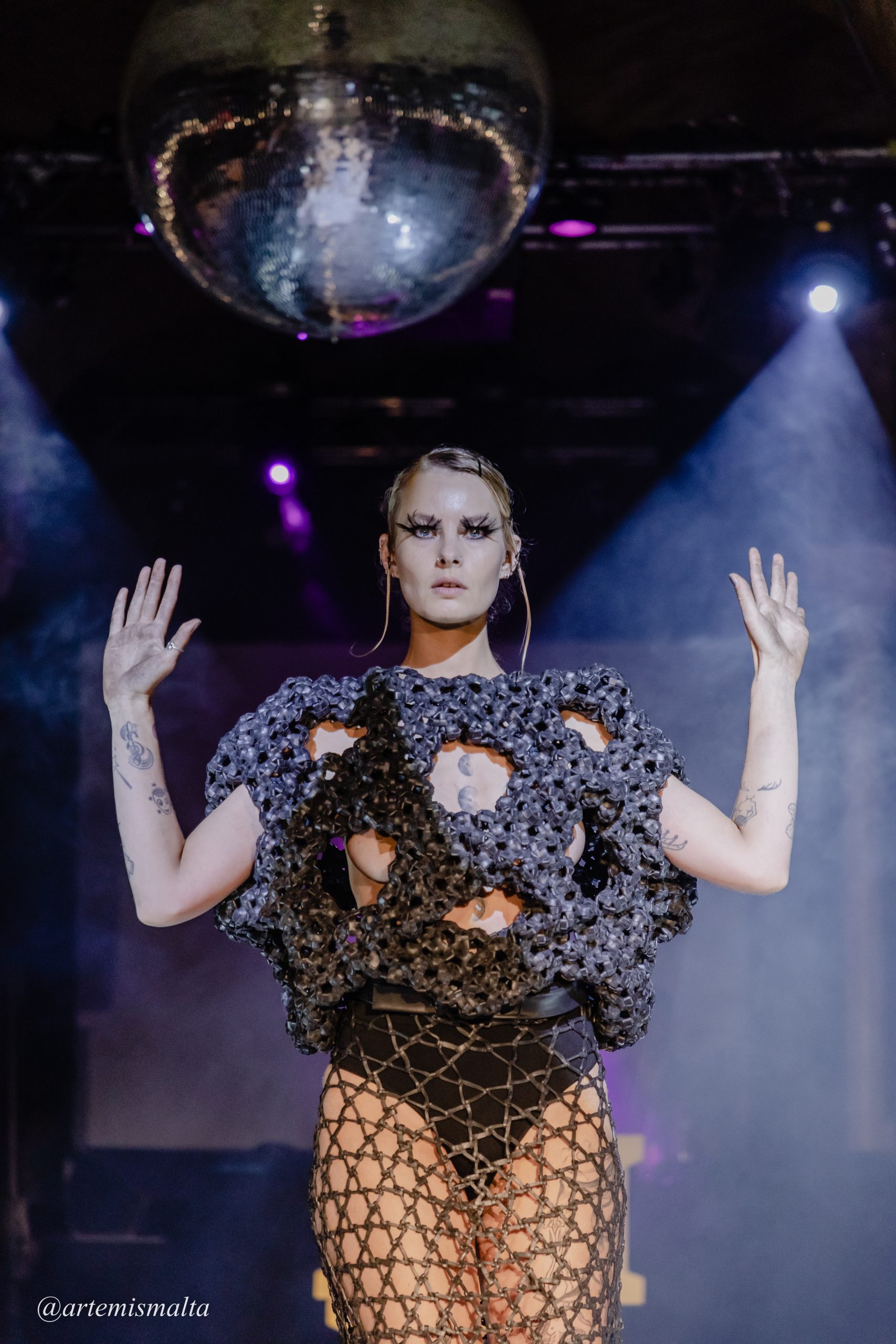 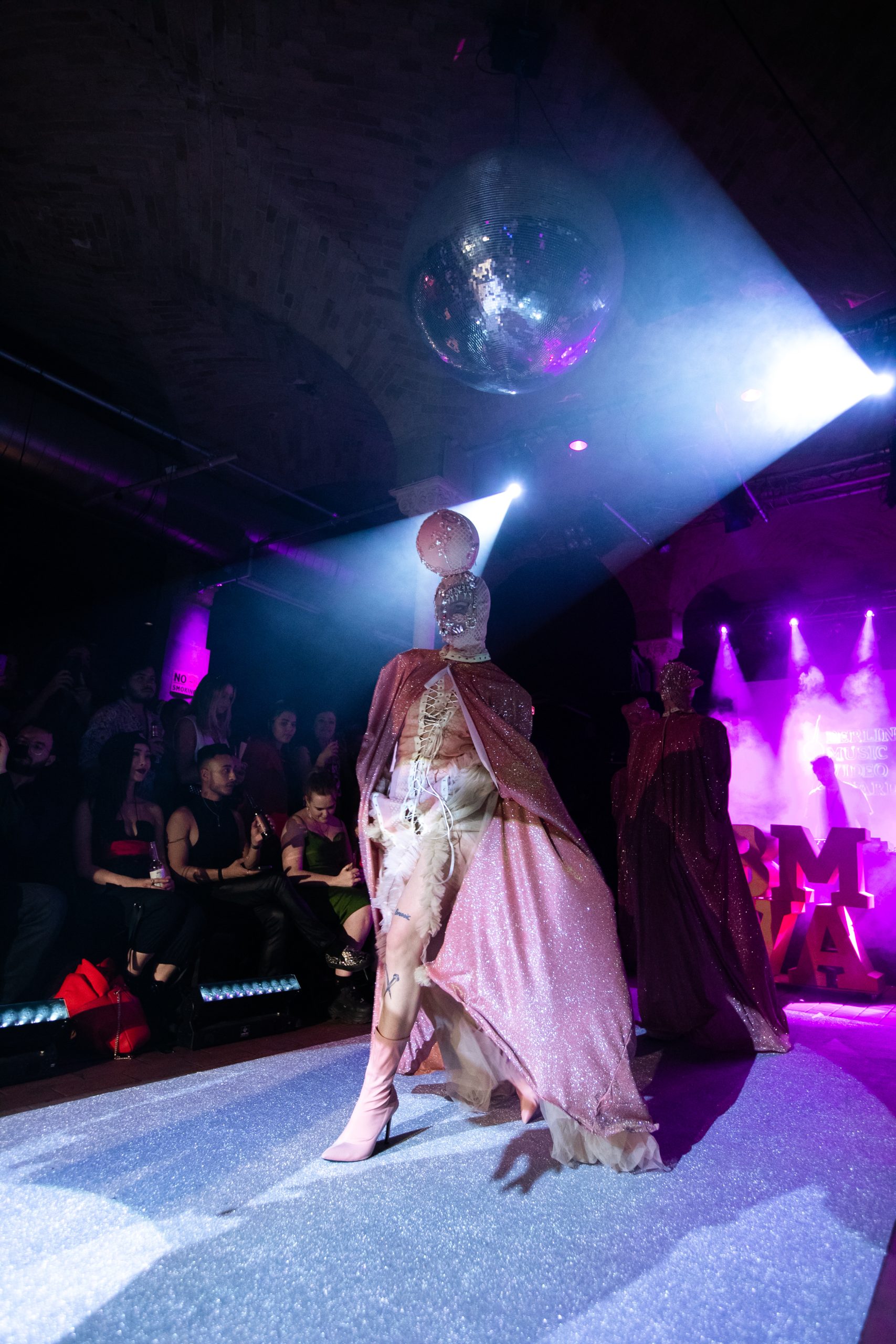 The two final collections were from the hand-crafted Spanish corsetry brand Jacq The Rimmel followed by the fellow Spanish-based Leonidas Kanavetsados. In Rimmel’s work titled Aesthetic Overdose, it was as though the most beloved Disney princesses went rogue. Historical nods to European royalty can be seen, with voluminous skirts and panniers, as well as corsets accompanied by headpieces but deconstructed and remixed hauntingly with BDSM elements for a seductive, modern appeal. Kanavetsados’ looks also seemed to blend contemporary styles with the far-away past, but an entirely different era that felt much more ancient. Chains, straps and meticulously cut leathers in black and white formed designer armour that would surely suit the battleground that is the Berlin club scene. It’s interesting how something can look so ancient but futuristic at the same time, giving it a sense of timelessness. 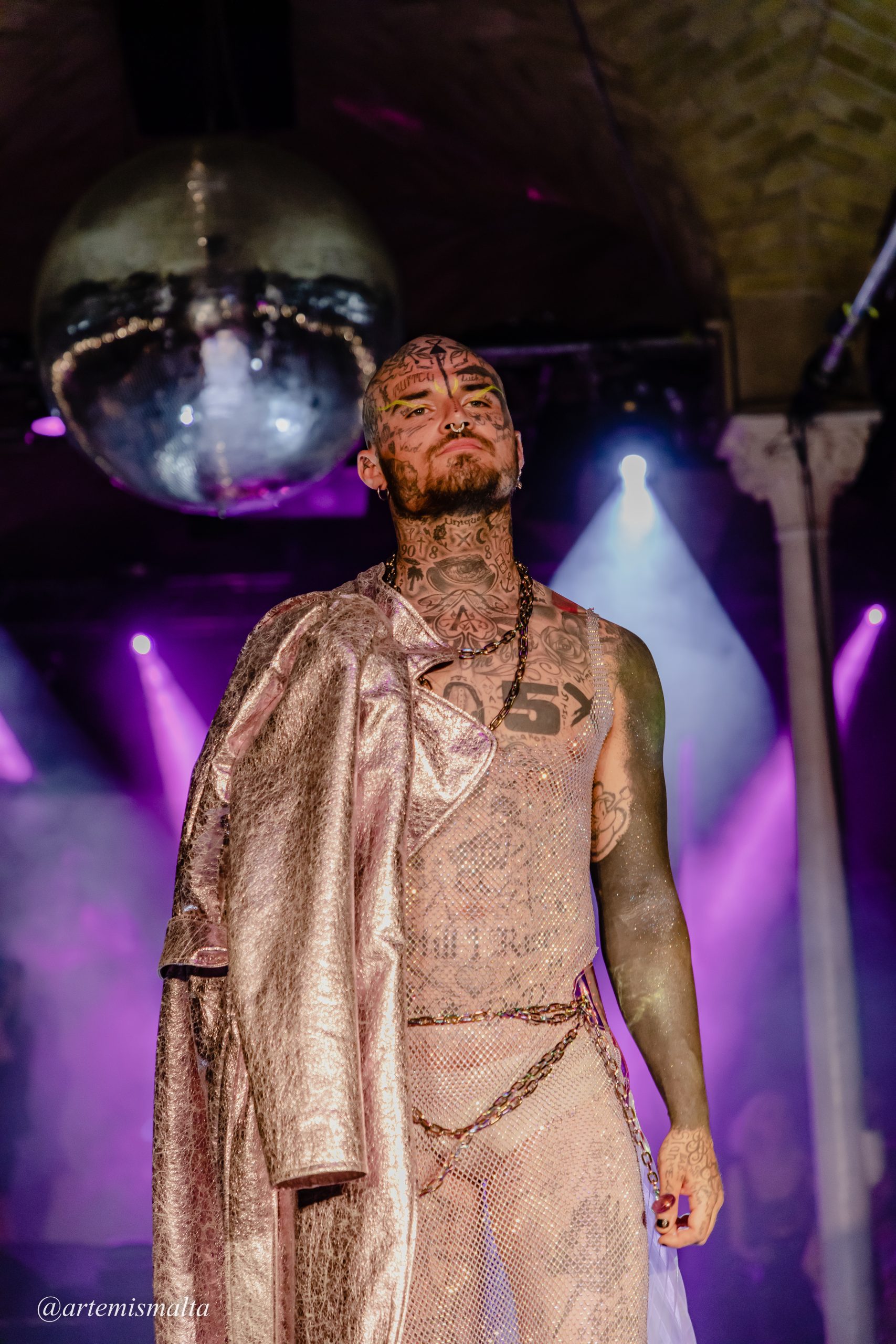 The fashion shows ended there as a multitude of campy costumes and designs practically tailor-made for music videos exited the glittery catwalk. To conclude the awards, director Gregory Ohrel took home the Best Music Video award for his work on Puerto Rican rapper Residente’s music video for “This is not America”, a politically charged Latin American anthem that has swept over the continent. After the events, it’s clear that the relationship between music, film and fashion is an intersection of all three, portraying the entirety of a vision in an expression of the three elements. Seeing Outkast and Andre 3000 while watching MTV music blew this writer’s developing fashion and musical brain. For Leonidas Kanavetsados, the designer told Schön! that it was seeing Madonna and the works of Jean-Paul Gaultier that impacted him. The music video awards nonetheless presented the designers with an attempt to display their collections in an environment that, while a runway, was different from those seen during traditional fashion weeks.

“I’ve done some fashion shows in the past, I’ve done some drag queen shows, but this one was completely different because you could really go over the top with everything. It gave me the opportunity to push the limit and show the soul of the dresses rather than what they only look like,” added Designer Marco Ward. It was hard not to leave the event with the mantra of Sex Pistols manager and prolific punk diety Malcolm McClaren ringing in viewers’ heads: “The look of music and the sound of fashion.” 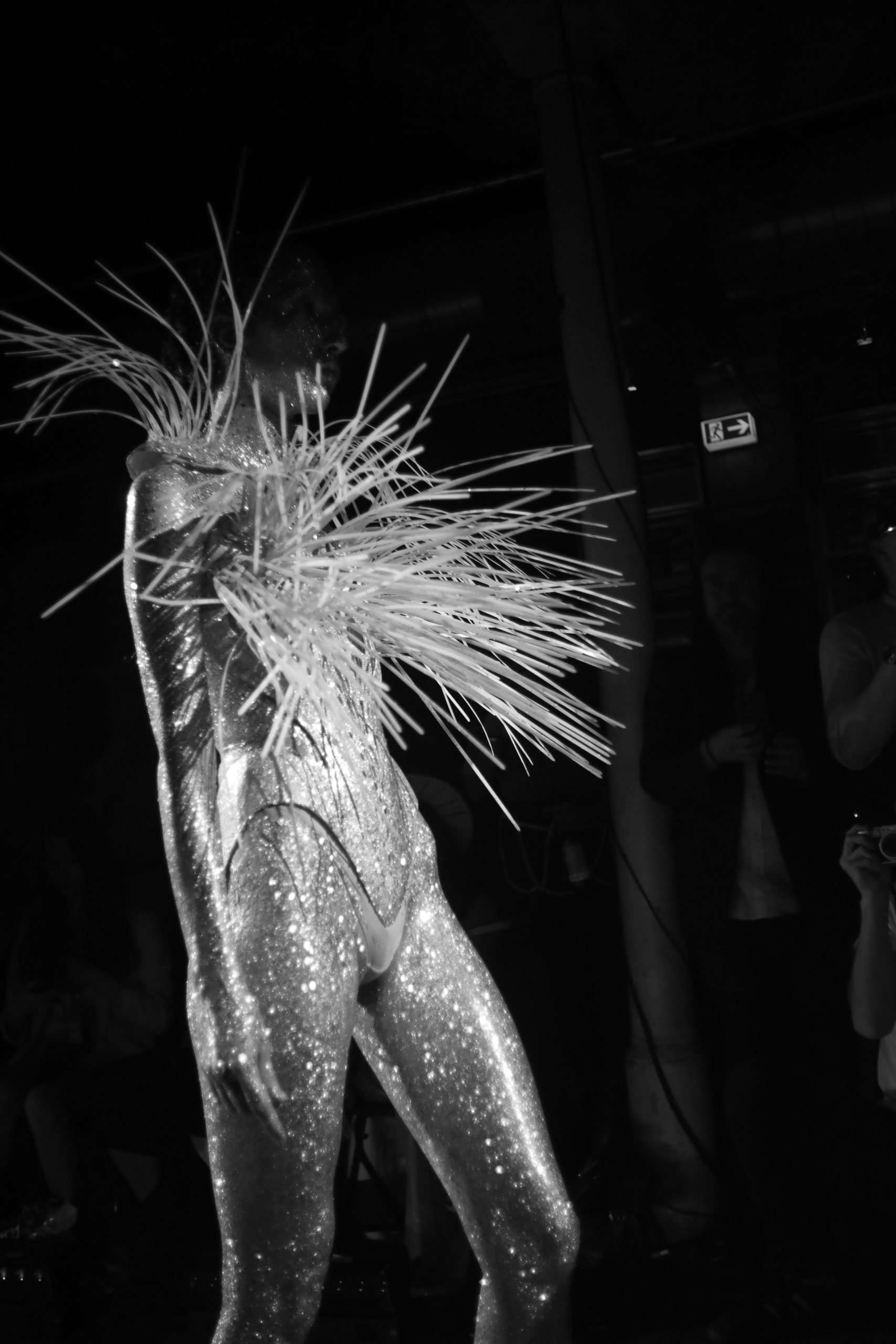