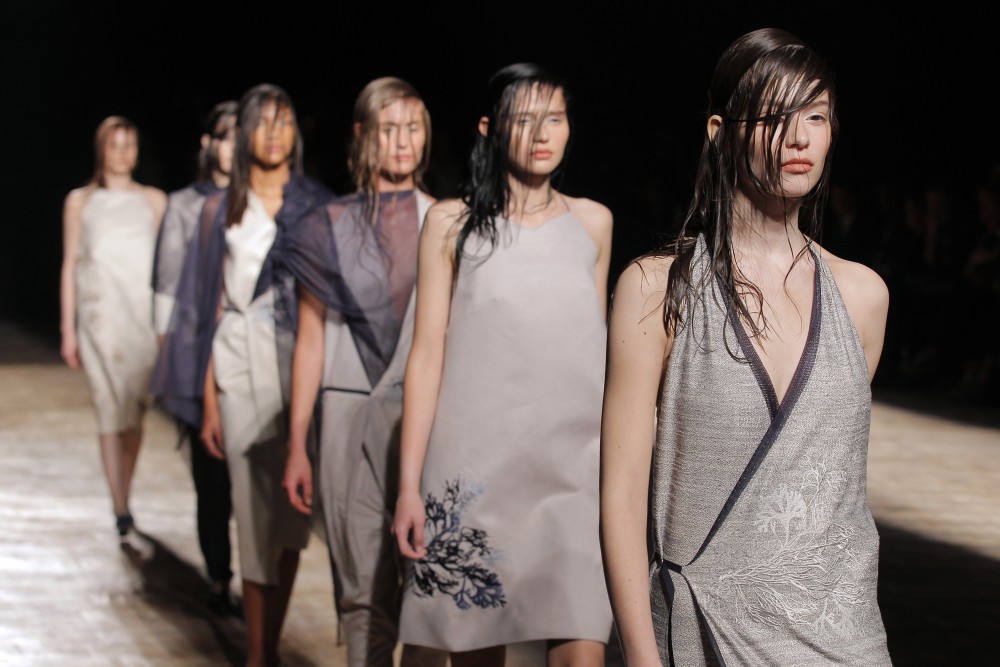 Alongside its European cousins Paris, Milan and London, Portugal Fashion reminded the global industry  that it holds its ground as a fashion centre, with 2015 marking the 37th instalment of the showcase. Held over four days in the capital of Lisbon and subsequently in Porto, Portugal Fashion displayed an array of promising talent from emerging Portuguese designers proving that as a country for fashion, it is not to be overlooked, nor is its cultural history in the field to be taken lightly. With 20 years of fashion week regalia under its belt, this anniversary edition looked back on the star-studded beginnings of the event, when the likes of Linda and Christy graced the passerelles of the Iberian fashion week. As João Rafael Koehler, president of ANJE, explained, “In these two decades, Portugal Fashion has taken on the role of reference in terms of cosmopolitism, creativity and aesthetic sophistication.”

Revisiting these past decades of aesthetic stronghold, the designers showcased their relevance in international design scene. Unisex pieces were a major feature across many of designers shown. Hugo Costa’s entirely unisex collection, which was already partially shown in Berlin Fashion Week, was created to be worn both by men and women, a feat which Hugo Costa achieves through his use of oversized silhouettes. Costa works initially in menswear and adapts those designs to fit in with womenswear. Although Costa believes his cool designs “work really well in Berlin and London,” at least some of his success as a designer he attributes to his position within Portugal, close to the factories which produce his garments and those for many other international brands. Despite being removed from the fashion capitals of Paris, London and Milan which does make developing an international market difficult, Costa attests that, “the best thing to do is to be here, close to Portugal, close to the industry.” It is his faith in the quality and production of Portuguese fashion which shines through in his latest collection which features clean, functional designs in crisp whites, denim and black. 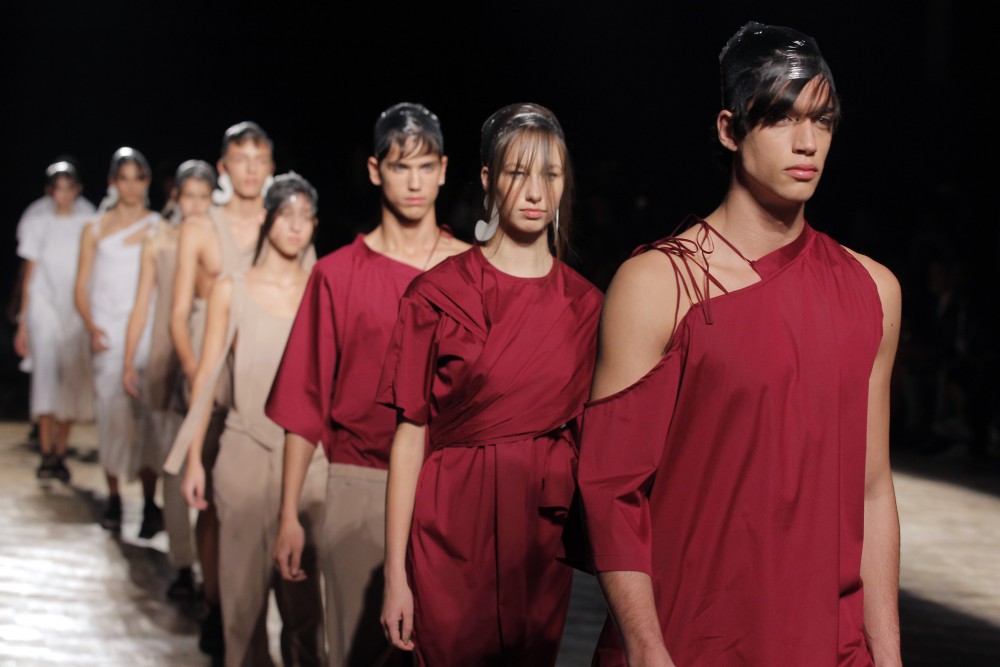 Other designers who embraced androgyny in favour of clear cut lines between menswear and womenswear were designer HIBU and Estelita Mendonça, who showed as part of the BLOOM initiative. Hibu’s show featured male and female models seemingly interchangeably to show their avant garde designs. Loose hanging fabrics were contrasted with the use of beige PVC fabric and large statement jewellery. Menswear label Estelita Mendonça brought a brand of fresh deconstructed functionality to fashion week. Using a mixture of camouflage and neutral colours, the collection had an almost apocalyptic quality with designs featuring glow sticks and ropes. 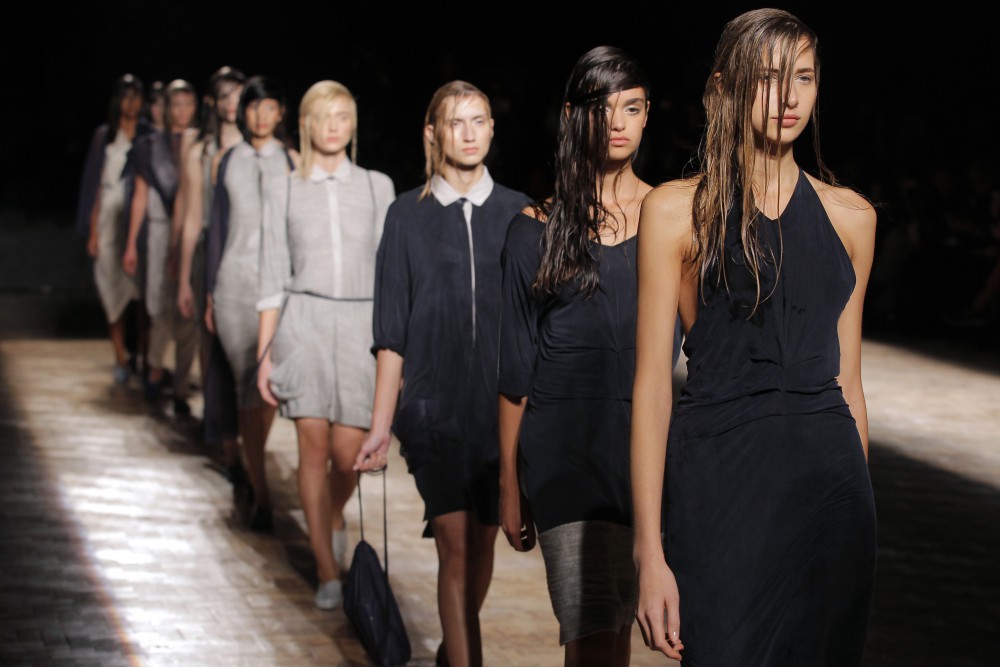 Neutrals were abundant. Using a muted colour palette of white, grey, beige, black and blue, designer Daniela Barros’ layering and draping were the hallmark of her collection. Her garments represented a new approach to traditional clothing with raw edges and knots. Designer Carla Pontes’ collection was defined by relaxed, ready-to-wear designs in neutrals and bright blues. Delicate embroidery, soft silks and mesh were abundant within the capsule collection which was decidedly laid-back. 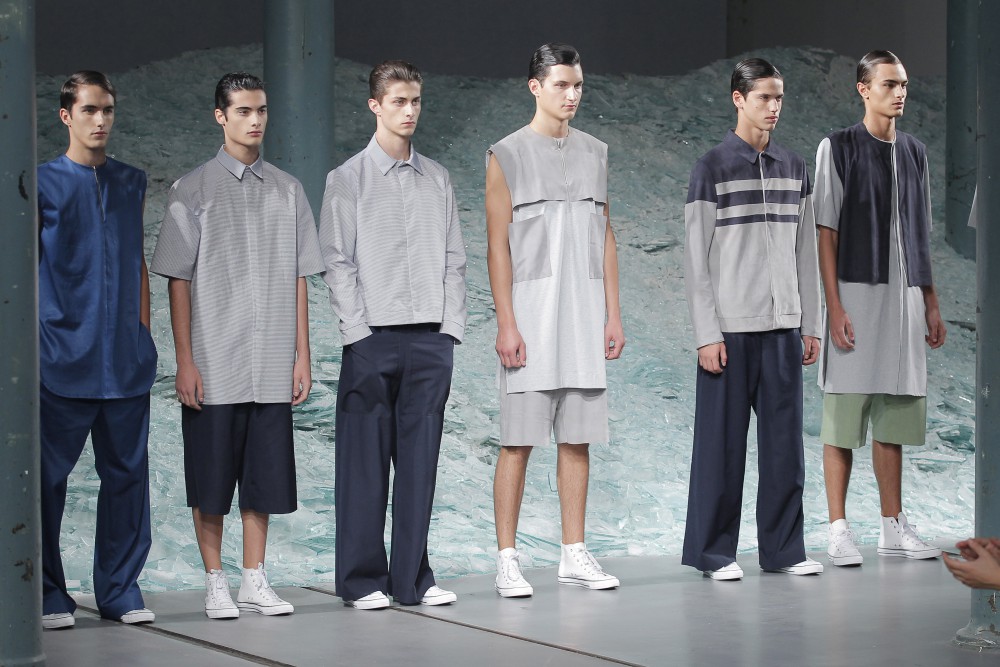 Immaculate details and intricate embroidery formed the hallmark of designer Nuno Baltazar’s collection which unlike many other designers featured in Portugal Fashion Week, embraced feminine lines. Using a predominantly autumnal colour palette, Nuno Baltazar’s use of luxe brocade, prints and embellishments made his collection one of the stand outs of the week. Similarly embracing femininity, shoe and bag designer Luis Onofre’s collection was characterised by his use of metallic details, jewels and snakeskin in a bold and glamorous collection while womenswear designer Susana Bettencourt featured crochet and knitwear in youthful designs. 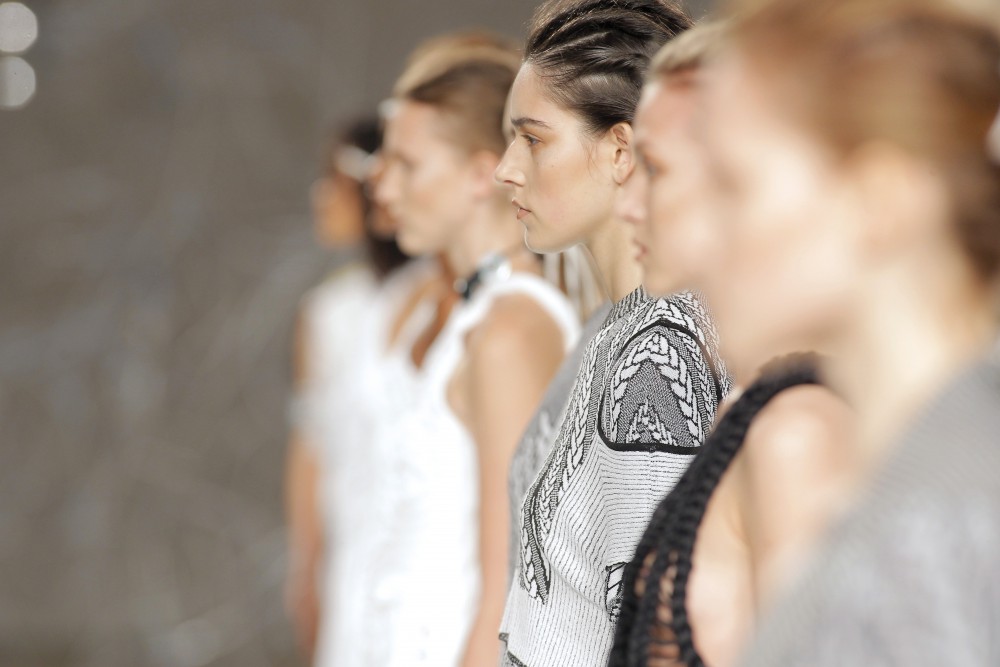 Designer Luis Buchinho’s collection was defined by bold prints, soft layered silks and military inspired hats. Althought the collection featured some menswear inspired pieces such as ties and suits, the collection remained feminine and soft. One of the more established names of the schedule, Buchinho’s presence on the Paris catwalks, alongside household names such as Fatima Lopes, brings the platform into an international perspective. As ever Portugal’s Fashion Week truly offered a taste of the wealth of talent, reaping the riches of a textile industry whose key role in European fashion is undeniable. Here’s to another 20 years of Portugal Fashion.

To discover more, head to the Portugal Fashion homepage.