Despite its legendary status for the new, the innovative, street style and from time to time, the unwearable, this season London Fashion Week consolidated and strengthened its fashion credentials with collections that were firmly based in great clothes, well presented and with a coherent statement.

This was oddly enough very clear during the Central Saint Martins catwalk show when the majority of the menswear was firmly based around clean, well made, strongly detailed pieces which a huge range of men might actually incorporate in their wardrobes and a L’Oréal winning womenswear collection by Gabriele Skucas which, to this viewer at any rate , seemed based on the bar suit from Christian Dior’s New Look but re interpreted into knitwear, both the creamy beige blouses and the black pleated skirts.

Clothes for women to desire, shop for, part with money for, wear, discuss, and tell their friends about is often not about the biggest names or labels. Discrete successful designers or those on the up without fanfares and tricks are clever managers, especially in the current economic and global climate.

Ceci, Malan Breton, Apu Jan, Theo VII, Irynvigre, all at Fashion Scout and Eudon Choi, David Koma, Roberta Einer, Judy Wu, Toga, Steven Tai, Emilio de la Morena. Each one of these designers had something relevant and modern to say, each seemed interested less in styling as the raison d’etre for showing a collection and more on fashion design. Perhaps the reverse Gucci effect?

Ceci, in a collection unlike but strangely somehow related to Gareth Pugh, featured, black and navy together, fluttering crushed silks, sumptuous devore velvets and brilliantly collaged denim. Shearling collars and jackets culminated in the huge Venetian Prince coat in denim reversed to shearling, the vast oversize piece instantly becoming desired by everyone in the audience. Malan Breton must have had a Bond Girl for Roger Moore in mind? Sharp, yet sexy and form fitting tailoring came both in 70’s green brocade and inky black, liquorice black leather and menswear in espionage worthy pieces led into evening sparkle and seductive draped dresses.

Apu Jan edited to his greatest strengths this season; a cool charm in knitwear, dresses and coats whose clean lines are played up with off kilter surprises, a twist of line here, a surprise cut there. Like the live music, he always uses for his shows, the handwriting is polished, assured and quiet. Theo VII created a show with just a few clear pieces. Self-fringed seaming, brilliant sunflower yellow, confident proportion play and some embellishment in both ordered geometry and soft flying fringe. Easy silhouettes with collection components fused into a short sharp statement. 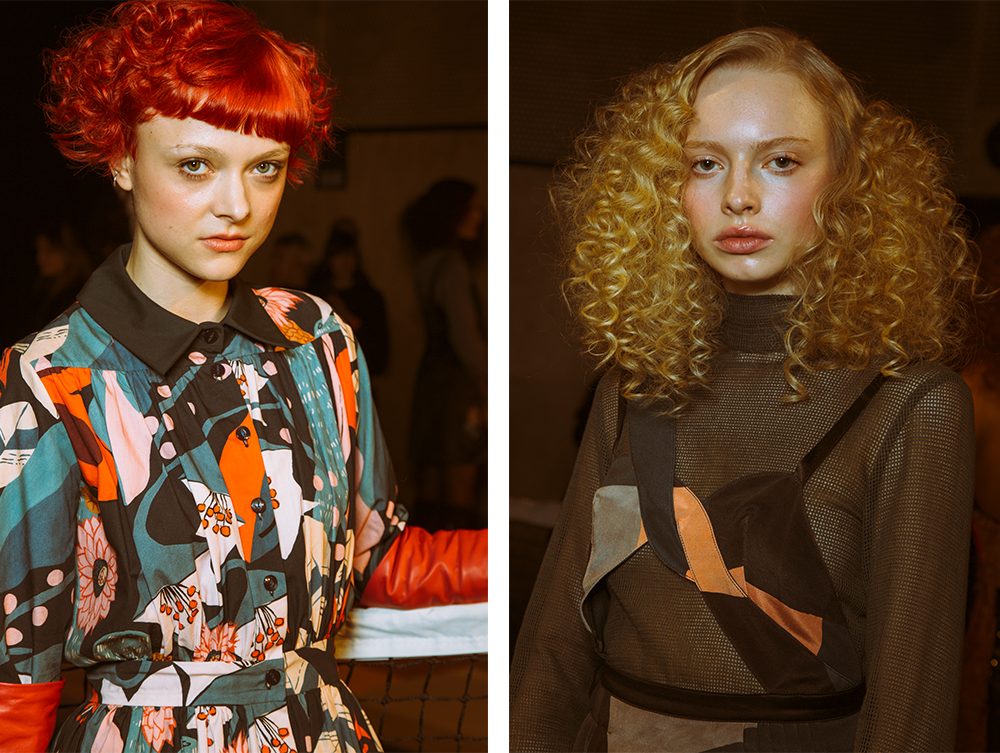 Roberta Einer has a colourful and decorative approach to the pieces in her collection, with a hooded coat featuring encrusted beading at the back or a pleated skirt in festive brocade, the trick was to combine all this into a delightful tableau vivants where each piece related to the next as the models posed, wandered and swapped positions enabling the designers consistent vision to be conveyed yet never over produced or edgy.

Eudon Choi showed a confident collection which layered and re proportioned many wardrobe classics; heavy knit sweaters, long easy shirts, double breasted pea jackets, silk charmeuse shift dresses and trench style coats. In a palette, which ranged from cool neutrals to chartreuse, and with a languid ease, these were beautiful clothes beautifully thought out and stunningly layered. David Koma was so polished, so professional, and truly beautifully made and constructed. The grosgrain ribbon bands like bullet containers, the sharp metal details on the garments, the quilting, and the long military coats were all part of the creative statement but what is paramount are the clothes and the attention to quality and detail. Brilliant beading and lace and a sudden highlight of chartreuse against the khaki, midnight blue and velvety dense black emphasised the talent of this designer’s sure hand.

Emilio de la Morena is also totally polished in his collection from a single ruffle to the layering of lace on a skirt. This season there was a darker Goya feel to the ruffles and lace, even a hint of Cristobal Balenciaga in the rigour of the lace and flounces. There was a diva and drama to the curving lines and silhouettes with colour often veiled or as ever with this designer, in brilliant combinations. The black fitted jersey tops, with ethereal tulle ballerina skirts in black over short cyclamen or lemon feathered skirts were genius.

What London designers also do brilliantly is up tempo or inventive presentations which have at their heart clothes, and so Ashish once again showed a beautiful and thoughtful collections, which many described as “moving” since the brains and creativity behind his work has a depth and emotion which he can communicate without overweighting the show. Down the Yellow Brick Road to the broken heart of Oz his visual magic held the audience enthralled until the tremendous applause. Yet pull the pieces out and a sparkling interpretation of a ski sweater can be work with anything from jeans to black velvet, a fun top can work alone or twinkling under a tailored suit. Every piece looks great as shown but has options when taken alone. It’s not a word to use lightly but I’m afraid in this case genius is appropriate.

Ryan Lo makes girly pink frilly clothes, but his tongue is firmly planted in his cheek as he grows and goes from strength to strength. This season with Sam McKnight’s extraordinary hair and Stephen Jones hats his girls seemed somehow as light as air and as artificial as animated dolls but every jacket, sweater and blouse or skirt, as with Ashish has an independent life. The season also the menswear pieces were deeply covetable.

The history and attitudes of the British culture are firmly embedded as a backdrop to much of our fashion; amongst which Garden Parties, Alice in Wonderland, Dressing Up Boxes, Tea Time, Nursery Rhymes, Narnia, and other influences can permeate through fashion. Molly Goddard threw the ultimate debutante tea party where ball gowns and party dresses awaken the Cinderella in every woman, Sophia Webster invited the White Queen to voyage from Narnia and offered her brilliant shoes and accessories in an enchanted winter wonderland.

London is also the home of music and club life for many people, Angus Chiang with his brightly coloured menswear with a distinctly gender blurring touch, Pam Hogg Queen of the cat suit and statement dressing; her collars are a work of sculptural art within themselves, and Krasimira Stoyneva with her filament fringing spinning into shimmering star patterns, all made highly individual statements which developed, edited, and focussed the eye with clarity on their clothes for the season.

Finally, to the individualists, four designers whose statements split the reaction of the audience sharply. Fyodor Golan loves colour synthetics, bold print, and a centre stage attitude. This season seemed stronger, more varied and with some intricate construction which really lifted the collection up several notches in quality and impact. Mark Fast returned and was on top form with his body encasing filigree knits, sexy swinging fringe and as always superb use of colour. Katie Ann McGuigan won Fashion Scout Merit Award and presented a collection so strong, so perfectly thought through and in such a luxury manner of fabric cut and silhouette that it simply wowed the audience.

Manchester born and raised talent A.V Robertson has talent and flair; she made her debut post CSM at Dior and Alexander Wang, but it was under Marc Jacobs (where she was his design assistant) that she made her mark. Robertson handles colour and embellishments like none other on the LFW schedule. Bringing an alien landscape into fairy tale realms, with reinvented florals that were resplendent against deep satin hues.

Finally, Gareth Pugh; doing what only he can do, and representing London style in London. The venue, the soundtrack, the makeup, the pace, and the drama was the distillation of Gareth Pugh. Rigorous scalpel cut tailoring, high octane wind filled drape, enormous shaggy polar coats, and a complete resistance to colour; put this all together and the statement is so strong it truly is love or loathe. My response was total adoration, especially since I found the premise behind the collection, and the soundtrack especially pertinent: Luchino Visconti’s The Dammed and Lilian Cavani’s The Night Porter, as amongst the influences cited in a press release which for once had something to impart regarding the designer’s work.

Ashish and Gareth Pugh in different ways and in many ways also at opposite ends of the creative spectrum chose to make strong statements. Fashion can be more than frocks but to do that it takes the exceptional talent these two possess.