First of all: obviously this isn’t a political column, but we cannot deny that with Brexit, Gilets Jaunes, elections again in Spain and impeachment in the United States, “uncertainty” is the name of the game in much of the world. So to a degree, many designers seemed to be “marking time” and “playing it safe”; indeed many collections looked so familiar it was like a greatest hits collection or déjà vu. It certainly wasn’t a season of surprises, huge directional swerves or designers confounding our expectations.

It will be interesting to see what the sales figures are like for this season, as I felt it reflected consumers’ desire for the familiar from brands and designers. Can we believe, in terms of fashion, reassurance in troubled times is a good thing? Strength of vision, even if it’s the same continuing vision, can be a great asset; continuity is never a bad thing for a label, and change simply for change’s sake is unnecessary if you know what you’re doing works.

I’m going to look at some designers who pulled off strong collections for very different reasons. You can investigate and make your own list, but mine isn’t the list I imagined I’d make. It’s been arrived at after careful consideration and scrutiny of images, now that the whole month of shows is finished.

Starting with New York. Eleven shows made my list, none of them ground-breaking, sharply innovative or directional, but in New York, that’s not what we’re looking for. Calvin Klein, Donna Karen and Ralph Lauren never made America great in terms of fashion by being oddball or outré.

Zac Posen knows his personal signature; he knows his customer and he knows how to construct beautiful clothes. In both his mainline and diffusion he speaks clearly: well-contrasting restrained slender silhouettes with ebullient volume. Expertise should never be underestimated, and his fashion is both modern and timeless. Brandon Maxwell also knows his look, his clients and the elements which go into making a successful runway show and collection. From a neat blazer over a denim shirt through to a glorious white ball gown, the ghosts of Katherine Hepburn, Lauren Bacall and Grace Kelly smile down, enjoying the clothes they recognise reimagined for 2020 — clever.

Sies Marjan threw caution to the wind with colour, but it was the stunning variety of silhouettes that were a huge strength in the collection. An edge-to-edge summer coat cut with a slight flare, a neat boxy jacket and straight skirt, a blazer worn over a long flowing shirt with palazzo pants, a soft belted trench, a draped goddess gown and more. The permutations were endless and formed a divine jigsaw of options to suit many a client.

Prabal Gurung and Naeem Khan both kept their cultural influences in mind without resorting to costume. Prabal ranged from feather-embellished black tailoring to liquid sea green and chartreuse drapery without faltering. Naeem Khan also used tremendous colour, with a deep violet dress in slithering satin or a gown of floating wisteria tulle.

Pyer Moss focussed predominantly on a soft, easy silhouette throughout the collection. This soft ease of the pieces was somehow enchanting because it wasn’t striving for complexity. Looks made in liquid sunshine yellow or a dense carnation pink or even in flowing lacquer red all spoke of confidence and beauty. The fabrics moved gracefully around the body; the collection spoke of wearing good clothes with pride. This easy attitude was also seen at Jonathan Simkhai. Here the colour palette was generally softer, conjuring up visions of twilight walks along a shore or long cool drinks on a terrace: flattering longer lines, gently floating pieces moving as the models strolled along the runway. Truly lovely summer looks. The Row has been a huge influence for many on the ease of silhouette and the longer silhouettes they favour. Brilliantly, they stayed true to their rigorous approach to fashion and style, reducing their colour palette to monochrome with accents of fresh clean sky blue and a touch of deep indigo navy.

Gabriela Hearst creates clothes for real lives and real women without ever resorting to being heavy and dull. The prime example of this was a sharp trouser suit shown with flip flops, which was made in a slubbed-surface fabric in a flattering deep terracotta. No-fuss, no-frills: just four buttons perfectly placed and a well-proportioned high sharp rever. Like the black and beige trench coat, her eye is faultless. I’m sure if Diana Vreeland were shopping today, she’d shop here.

Proenza Schouler are brilliant, and this is why they sometimes go off-kilter. This season was perfect. Check it out online and see for yourself. That’s all I’m saying. Ryan Roche: not wild and wonderful but wearable and wonderful. Opening with a beige trench and finishing with six scarlet looks, the balance and the modern wardrobe pieces were impeccable. It’s much, much harder to do this kind of collection than people think.

London comes next. Eight collections seemed fully coherent and focused. Marques Almeida were back in top form, and the taffeta and brocades they handle so perfectly were strong evidence. Volume and bounce were there, but with some fluidity as well. Standout? A vicious yellow heavy taffeta coat with a sharp collar, fly front and a nod to Balenciaga in every curve. Sharon Wauchob is a brilliant designer whose clothes are intelligent and interesting. They stand outside seasonal whims and fancies. When the women seated in the audience see the models walk past, they want those clothes. Isn’t that really and truly what a good designer’s clothes should be about? Not a “must-have” for the label, but a “must-have” because it’s good design. Rejina Pyo is also a quiet designer; ever since her first installation show with live models, she has quietly gone about the business of creating clothes for today, clothes and pieces to buy and wear and clothes with that special something that speaks to customers rather than screaming or shouting. Duro Olowu also creates clothes that speak, but in a pattern and colourway with a distinctive story. These are timeless pieces to wear and cherish and love, like heritage fashion should be. If you love Duro Olowu clothes, you’ll crave them and add them to your collection; they are perfect with many basic or minimal pieces that support their statement patterns and surfaces.

Victoria Beckham designs for other women like her: women who love fashion but don’t buy designer labels, which are all about their cost and season. The collections evolve and melt one into the other with updates and subtle shifts. It’s fashion and style and discrete, and it’s not instantly recognisable as becoming to Victoria Beckham’s label unless you’re in the know. This is clever design from a woman whose worn the Red Carpet dazzlers and moved on. Roksanda was terrific, fluid, colourful and lovely. Her hand is very sure, and each season she is focussed on her signature style. However, as always I worry about enough tall women buying these looks. It’s great, but it does seem designed for a tall woman. Richard Quinn is very, very talented, I wish he’s either shift his running order or balance the looks less erratically. Somehow it always jumps around from huge florals to solid fluidity, from siren dress to balloon coat. Each piece is great on its own but as part of a show it’s a bit exhausting. However, they’re great pieces. I always think if Norman Hartnell had a grandson it would be Richard Quinn. Finally from London, palmer//harding and the art of the shirt — but in their brilliant hands, it’s so much more than a shirt inspiration. The finish and polish and the whole look of each collection is a balanced lesson in perfectionism, discussing its looks as though dissecting the subject of the shirt. Great.

On to Milan, where eight collections caught my interest, starting obviously with Prada. Miuccia Prada is now able to use all her signatures, mix them up and offer a fresh viewpoint. It’s perfectly balanced and perfectly executed. This season offered customers less fuss, and the first three outfits were just “understatement in fashion” at its pinnacle. There were a lot of pared back, “simply Prada” pieces and looks, kind of the distillation of early Prada. I really liked it, and I always ignore the hats and bags and shoes to concentrate on the clothes, even though I know that’s odd.

Bottega Veneta is having a “moment” under its new designer Daniel Lee. I can’t explain why, but there’s a hint of Helmut Lang around the clothes. The pieces are clean and strong, be they soft and jersey or hard and leather. It’s not pretty, it’s not easy, but it’s very good. 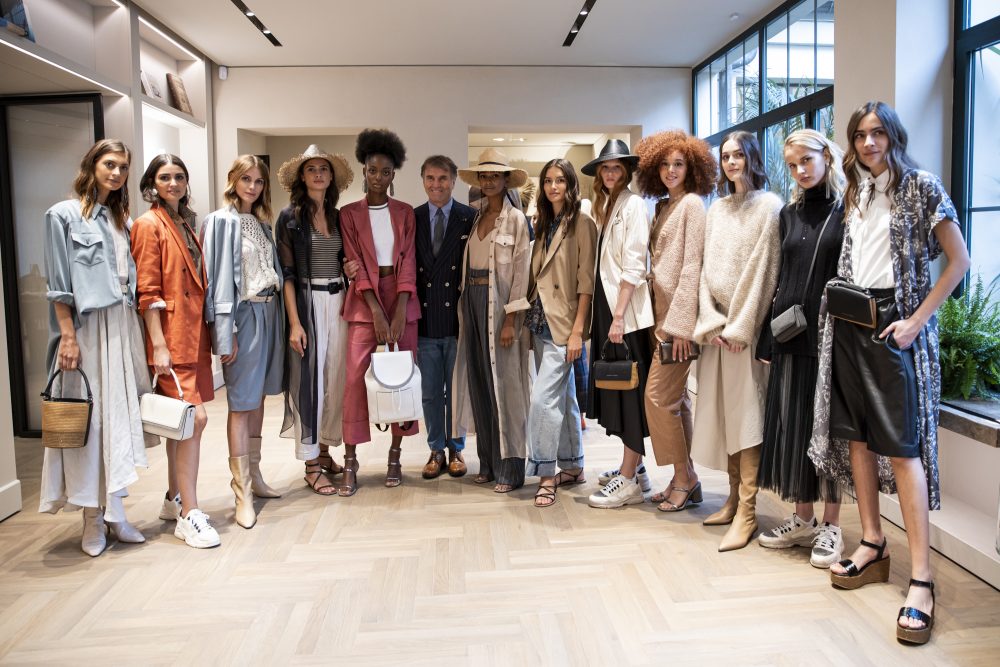 Brunello Cucinelli stayed true to their sophisticated signature and the luxury the house stands for season after season. In a strange way, it links to The Row, as does a favourite of mine Agnona. I cannot do better than quote Luke Leitch of Vogue Runway: “If you are both rich enough to buy Agnona and discerning enough to buy Agnona, then game over – you win.” Read his detailed review to understand why. Kiton follows in the same vein with stunning colours and a soft fluidity which characterises the best of next season. Luke and Lucie Meyer at Jil Sander mixed the minimal with the artisanal to beautiful effect. Finally Marco Zanini – in this same soft, stylish, beautiful, grown up, modern/timeless and uncluttered mood. This is the fashion and trend story which resonates in a troubled world. Clothes providing breathing space in fabulous colours and beautiful fabrics and which will last long beyond the season.

If you link what I’ve said here with my Paris words, I hope you can see the fashion and style message. It was certainly a message some houses who should know better — and their design teams — ignored. Clothes need to function in the world into which they enter. If they’re created without a real passion and a real purpose, simply because a collection has to be made, then the customer knows instinctively that they’re being conned. Summer 2020, the season fashion grew up and faced reality.