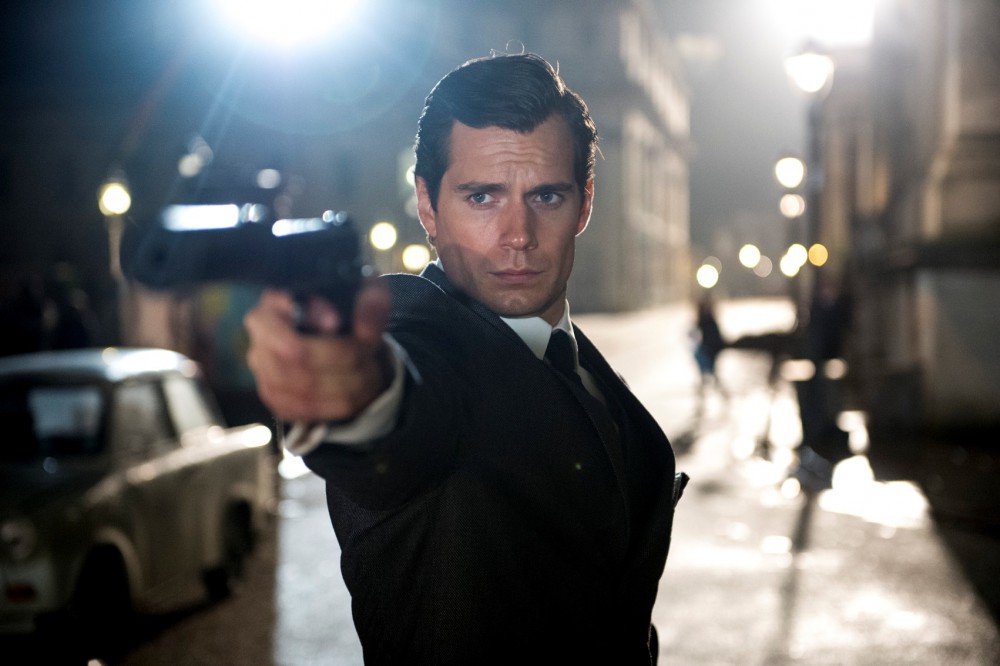 For those too young to remember, The Man from U.N.C.L.E. was a pretty popular television show throughout most of the 1960s. It focused on the unusual partnership between CIA operative Napoleon Solo and KGB spy Illya Kuryakin. Fans of the series should not expect a remake as such. Instead, Guy Ritchie has focused on imagining the circumstances in which this unlikely alliance comes together. Other than the two main characters, and their soon-to-be boss, Waverly, played by a scene-stealing Hugh Grant, little from the original remains. What Ritchie’s film has kept (unlike other spy story remakes such as Mission Impossible) is the period of the Swinging Sixties, and this is central to the look and feel of the film.

Ritchie’s retelling opens in East Berlin, circa 1964, before crossing over the wall to West Berlin, but is primarily set in a Dolce Vita era Rome, with all its glamour and glitz. The locations and interiors play a significant role in setting the tone of the movie, as the atmosphere of the period is recreated in meticulous detail by Production Designer Oliver Scholl. We first meet Solo (the outrageously handsome Henry Cavill) and Kuryakin (the equally gorgeous Armie Hammer) as they battle to whisk Gaby (Alicia Vikander) over the Berlin Wall. Gaby is the daughter of – and only lead to – a disappeared former Nazi scientist and weapons maestro, believed to be making a nuclear bomb for neo-Fascist millionaires in Italy. Rather reluctantly, the trio travel together to Rome in an undercover attempt to rescue Gaby’s father and and scupper the scheming villains, who are masterminded by the ice cold, but super sophisticated Victoria (Elizabeth Debiki). 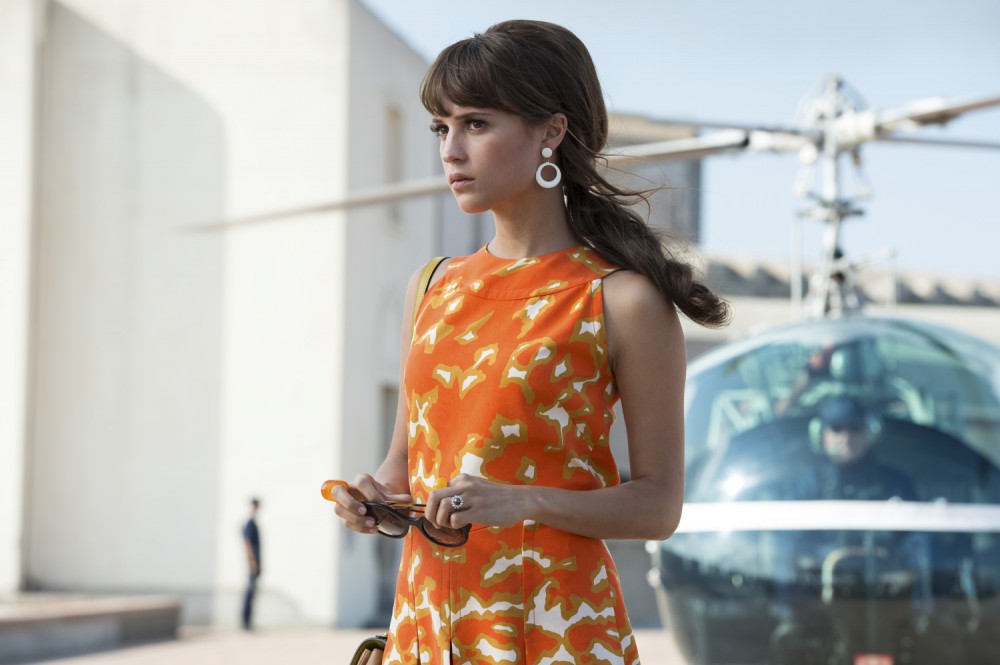 So, that’s the plot, but now for the really fun bit, the fashion. The costumes in The Man from U.N.C.L.E. aren’t only a means of characterisation (although they certainly deliver in that respect) or simple set dressing. Instead, they are a central element of the film, as is demonstrated in a comic scene where the conflict between our manly heroes is over womenswear labels rather than Cold War politics.

Award winning costume designer Joanna Johnston strove to avoid clichés when recreating the look of the ‘60s, aiming instead for something “more subtle and original, but still glossy and slick, like those films you remember where everyone looked good no matter what they were doing.” Johnston obviously still had fun with the period. “It was a very radical and adventurous time across all disciplines, from art to fashion and music,” she explains. “What really struck me was the freedom of design of the time; it shines through the photography, the models, the styling, everything.” 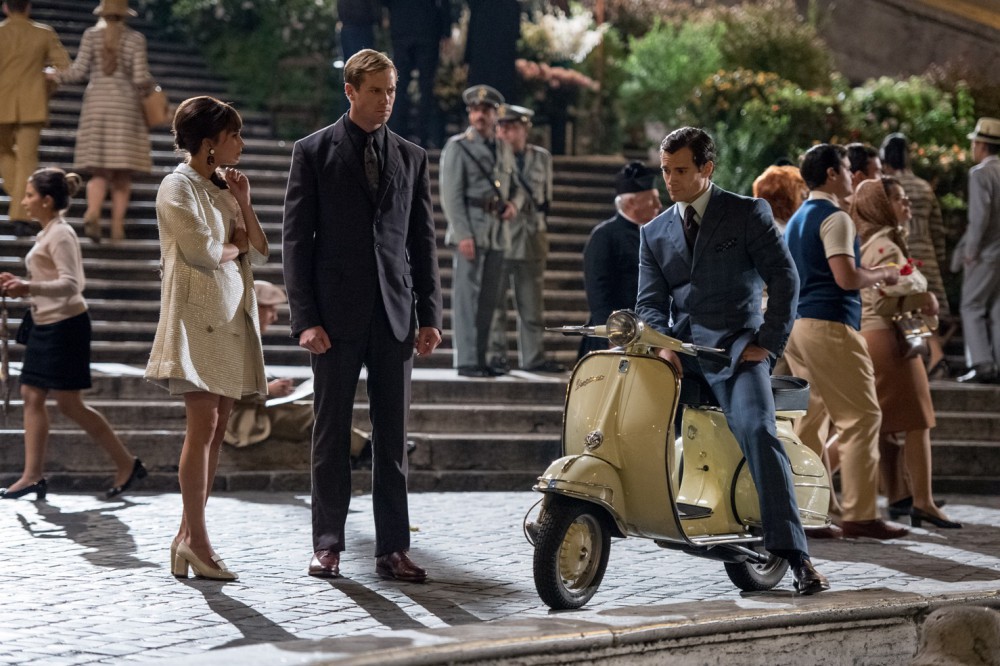 Solo is a man who has “reinvented himself”, so Johnston dressed him in Savile Row tailoring by Timothy Everest and handmade shoes. He “looks like the proper gentleman,” she says. “He’s all about the vanity and projection of his appearance – so expensive, good-looking and chic.” The immaculate three-piece suits certainly helped Cavill get into character. “They were made of the most wonderful fabric and as soon as I put them on, I felt like Napoleon Solo,” he says.

In contrast, the Russian agent’s look is more casual, comprising suede and corduroy jackets, and “of course, the turtleneck sweaters” explains Johnston, “which was the only element I had to keep from the TV show because it’s the first thing everyone I talked to mentioned.” Hammer didn’t seem to resent his low-key wardrobe. “It didn’t feel like costuming because it was never over the top,” he says, adding jokingly, that Kuryakin was, after all, “on a Soviet budget”. 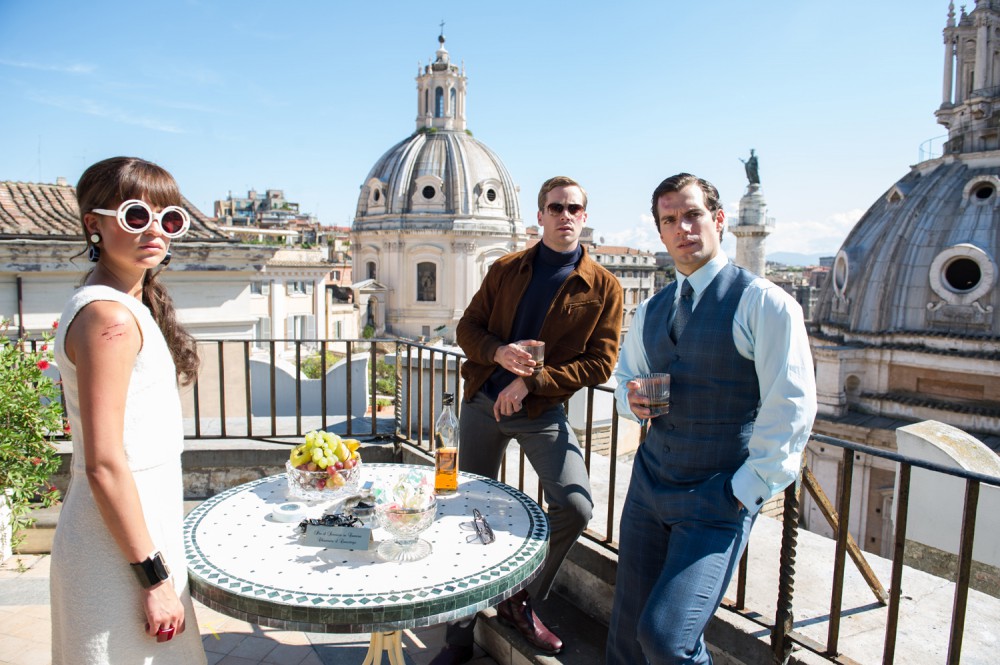 We encounter Gaby working as a mechanic in East Berlin and sporting overalls, but as soon as she is presented with the opportunity, she pulls off couture with ease – indicating that there is more to this tomboy than meets the eye. Johnston describes Gaby’s style as “fresh, young, simple and clean,” and it’s this look that is probably the one that most of us associate with the era. The glam factor is ramped up when we meet the evil Victoria with her sophisticated monochromatic and graphic look. “Victoria’s clothes represent the best of ’60s fashion,” says Johnston. “She’s quite a fan of bling and belts and, because she’s so wealthy, we felt there needn’t be any limit. Plus, being the villain means you can do whatever you please.”

In a sense, Ritchie has also chosen to do what he pleases with this film, rather than be restrained by a cult classic. There are many things The Man from U.N.C.L.E. is not. It is not a gritty, realistic cold war thriller. Neither is it an action packed rollercoaster ride. At its heart, it’s an old fashioned spy caper, with some finely orchestrated action (the opening chase in particular stands out), plenty of tongue-in-cheek humour, more than its fair share of eye candy and, above all, bags and bags of style.