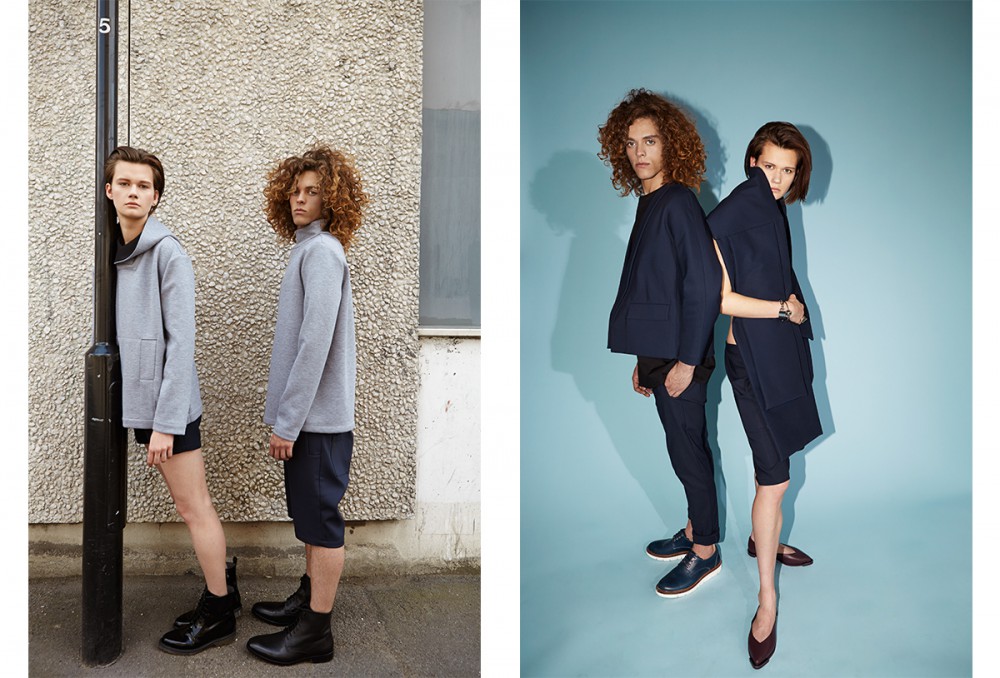 This week, Microsoft Lumia teamed up with a different curator each day of the week to break the nine to five mould. Working beyond the limits of the usual working hours, we brought you The Nine to Five, a newspaper filled with inspirational reads – a tribute to those who work out of hours, round the clock, to do what they love most. Schön! brought you Thursday’s paper – with a focus on couturier Rad Hourani, an interview with boundary-breaking blogger Jillian Mercado and a informative talk with the British Fashion Council. Did you miss the paper? Catch-up with an exclusive read of the main feature here on Schön!

Canadian couturier Rad Hourani launched his career in Montreal as a stylist before founding his eponymous label and showing on the Haute Couture schedule in Paris at the young age of 25. With his signature unisex designs, Rad Hourani is at the forefront of a wave of gender-free fashion. Schön! speaks to the self-defined ‘visualist’ for an exclusive insight into the world of Rad Hourani.

Leaving the education system after high school in Montreal, Hourani established himself first and foremost as a stylist, working full-time from the age of 19. “I have always been driven by aesthetics,” he tells us. Juggling between his work for a modelling agency as a scout and his styling, Hourani established his multi-media eye, cultivating his signature style by observing.  “It was a bit like a 5 year training program for what I do today.” Upon his move to Paris age 23, Hourani began designing his own pieces, primarily for himself. “I was looking for something very specific that did not exist,” he relates. Totally unhindered by the conditioning of any fashion school education, Hourani envisioned a new way of dressing. “It was an advantage for me not to be programed by any school or conditions, as I was and am my own teacher,” he explains. “I have the freedom to create whatever comes to my mind that fits my unisex vision.”

In fact, in 2013, Hourani went on to become the first unisex label to be granted the title of Haute Couture – a seal of approval that is both difficult to obtain and protectionist of excellence – so a wonder, really, that the usually conservative selection process of the Fédération Française de la Couture opened up the couture sphere to a unisex house. “There had never been a unisex pattern before I created one. My process is always based on my original unisex canvas, starting with my main rules: genderless, timeless, season-less, ageless.” Developing his own signature cuts based on rectangular shapes and symmetrical designs, Hourani broke away from the pomp and conventional showiness of couture. “I sketch a graphic shape that can become a building, a piece of furniture or a sculpture. It’s not limited to becoming only a garment. I choose my classic fabrics in black to create the first item. From there, I evolve from the first sketch. Everything is digitalised.” To this extent, Hourani is part of a new generation of petites mains working in couture, fully understanding and working with technology as a tool. Hourani is aware of the creative potential that the digital era brought about. “The Internet has helped build my career as it gave me access to the whole world, ” he admits. “I also create all my patterns and sketches on computers, and that is a very technological type of process.” Plans for the future includes incorporating 3D printing into his couture designing process.

Wearability, functionality and comfort constitute the core of his work – making simplicity and unfaltering quality the defining features of his designs. “Attending to complexity and simplicity at the same time is a very long process,” he states. In this sense, his ethos is in line with the conventions of couture. “It’s all about savoir faire, which is working with the best of the best in every aspect: fabrics, tailoring, cutting, fitting, proportions.” As the frontman of his house, Hourani is 100% behind the design process, delegating only to his closest team members, and that only when it comes to producing the collection. An unashamed perfectionist, he willingly admits that quality and minute control is the key.

Never one to be limited by labels (apart from the aforementioned one of perfectionist), whether those be relative to gender or titles, Hourani has crafted a unique visual language – one that combines design, art, fashion, film – in short, a whole host of media in one. “I am all of those things in one,” he echoes, when we ask what he would define as his main field. “I want to be able to express my vision through all mediums to communicate my unisex language completely.”

At the heart of his work is the body; his work both echoes corporeal lines whilst marking a clear break with the conventional gendered codes of design. “It took me a full year to understand the different shapes of bodies and I how I could assemble all genders in one,” he explains. Whilst the world of fashion is only slowly getting used to ‘agender’, differentiation according to sex and gender is, for Hourani, an entirely alien concept. “It doesn’t make sense to me that a woman should dress in a different way to a man, or vice versa. I am not trying to dress a man like a woman, or the opposite,” he clarifies. “I am creating a new way of dressing that makes people look modern, without any limits.” 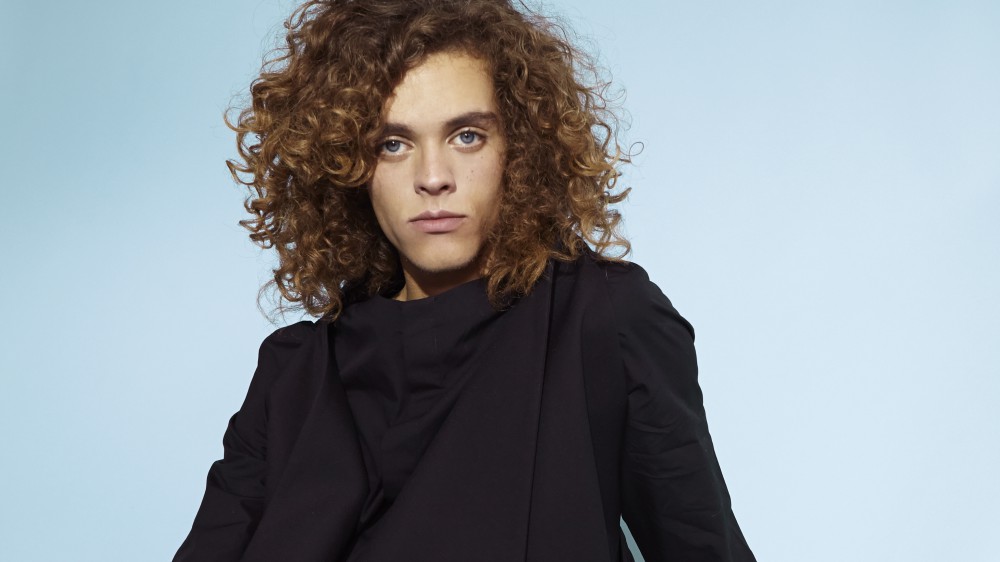 “I design from a very virginal point of view, trying to elude classical ready-to-wear rules that make us believe that women and men deserve different approaches,” Hourani states. Unlearning the dynamics of the market is crucial – since the whole industry is hinged on the very profitable constructs of womenswear and menswear, seasons and fleeting trends. “I hope to reach people who do not define themselves primarily as men or women, who go beyond the classic demographic criteria.”

“Design, for me, is a tool of self-expression and self-invention,” he continues. Once his designs are worn, the full potential for freedom is realised – the wearer purveys the full meaning to the garment. “It’s about objects transcending simple functionality and gaining symbolic power by engaging [people] in a dialogue with their environment and their time,” is his explanation.

Not content with the ways in which fashion has succumbed to becoming a mere commodity, Hourani wants to use design as an agent for change. His aim, he tells is, is to “build a modern world where I can see people observing things instead of doing what society tells them to do. To see more people questioning everything that has been imposed on them: gender limitations, religion, borders, age, race, nationality.”

When we speak to Hourani, he’s juggling preparations for the couture shows and a campaign shoot, balancing his time between Montreal and Paris. The whole idea of seasonal collections is unnecessary, for him. His aseasonal work is only categorised into groups by a sequential number allocated to each collection, minimising differences between each season. “I do not start every new season with a specific concept, but rather try to establish continuity from one to the next.” For his collections, he gathers inspiration from everywhere – often cutting back on information, rather than oversaturating his work with references. “I see the mind as a computer that registers everything around it, and it is not possible for it to function when it is full,” he states. “I am inspired by the idea of erasing everything in me and starting over and over again, all the time.”

With so much on his plate, it’s no wonder that Rad Hourani never finds time to stop. His daily schedule, he tells us, is a marathon. What does a typical day involve, we wonder? “Everything!” he laughs. “From designing, to editing, to shooting, to management, to travelling… it’s all non stop. It’s always like a marathon.”

“My message is not just about clothes or art or film, it is about a complete lifestyle and way of being,” he concludes. Rather than switching hats between as Rad the couturier and Rad off-work, Hourani devotes his energy and time to the lifestyle his work represents: one that has reinvented the present, the future, and the conventional way of dressing. “I am thankful to see how many people react to what I do and I am glad to be able to continue doing what I love to do.”

The Five To Nine was bought to you by

Special Thanks to the Microsoft Lumia UK and Protein teams.