The Palais Galliera in Paris praises haute couture designer Azzedine Alaïa with a new retrospective consisting of seventy celebrated garments. This extraordinary exhibition highlights Alaïa’s profound creative accomplishments, focusing especially on his ideas towards the significance of being a woman. 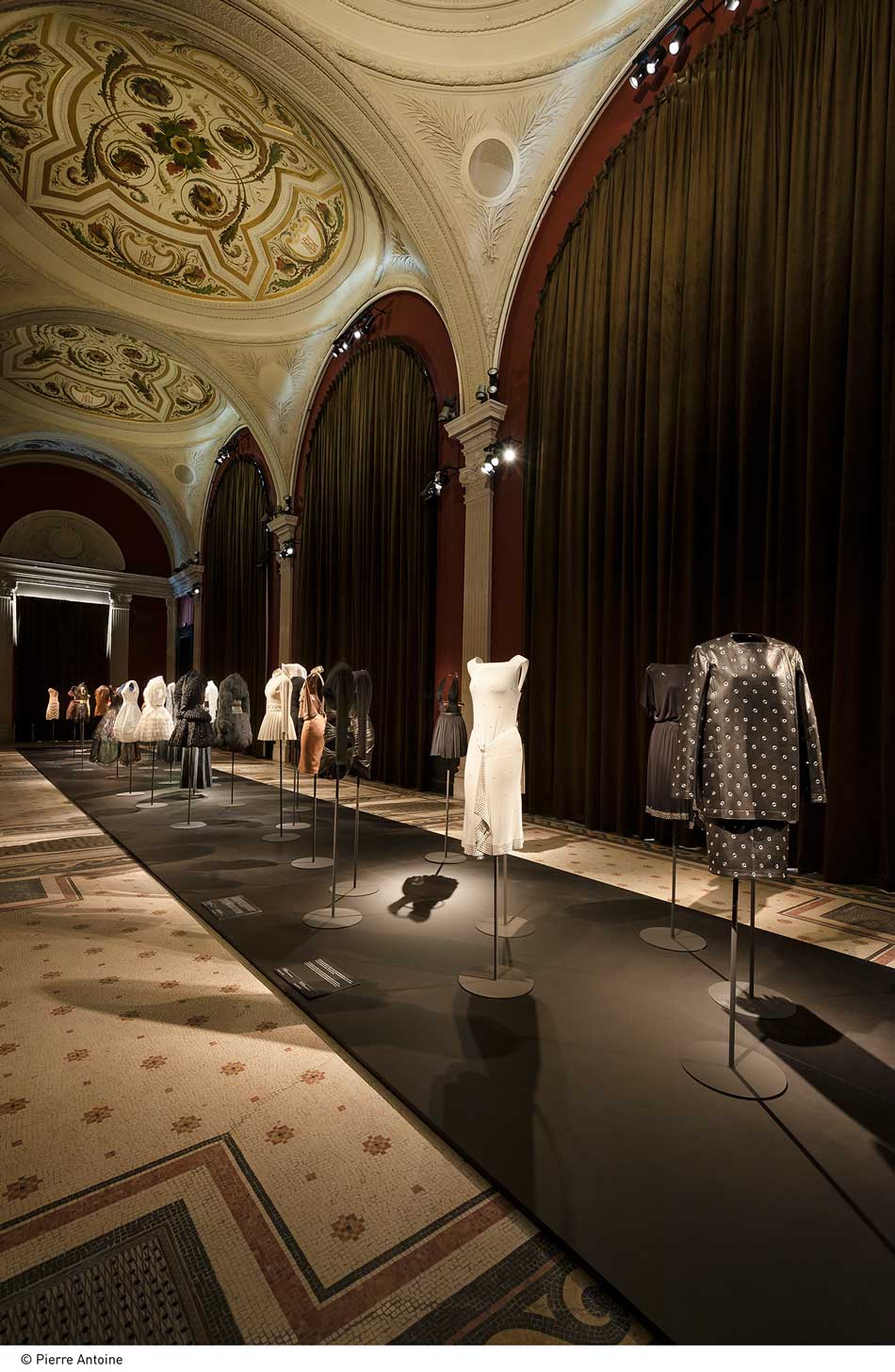 While he briefly worked with the giants Christian Dior and Guy Laroche, Alaïa truly learned his craft by studying the nude aspect of the female body in relation to clothing. He dressed women truthfully, through instinct.

The couturier presented his first collection in 1979, thanks to some encouragement from his friend Thierry Mugler. Full of leather alluding to a second skin and jersey to accentuate a sculpted physique, the collection speaks to fluidity and freedom.

The first dresses in the exposition lure onlookers into the grand room. Zippers wrap around a series of black garments. Metallic eyelets puncture jackets. Stitching flatters the curves in the female body. “With the movement of the muscles, we can see how the fabric adapts to the curves,” Alaïa once said.

More than a designer, Alaïa is a true artist in the way he sculpts with silk chiffon, African goatskin and Mongolian lamb. In fact, sometimes his garments seem unwearable as they resemble actual sculptures as opposed to clothing. One example is a blue fur jacket with overwhelming lapels and a mahogany, frayed finishing. The designer creates new shapes out of the interaction between intricate stitching, justifying he is the maker of an eternal array of designs.

Alaïa chooses to work on his own schedule and releases his collections according to what he deems appropriate, rather than supplying the seasonal demand of the industry. He prefers to construct “garments that last” versus to ones that disappear as tastes change. 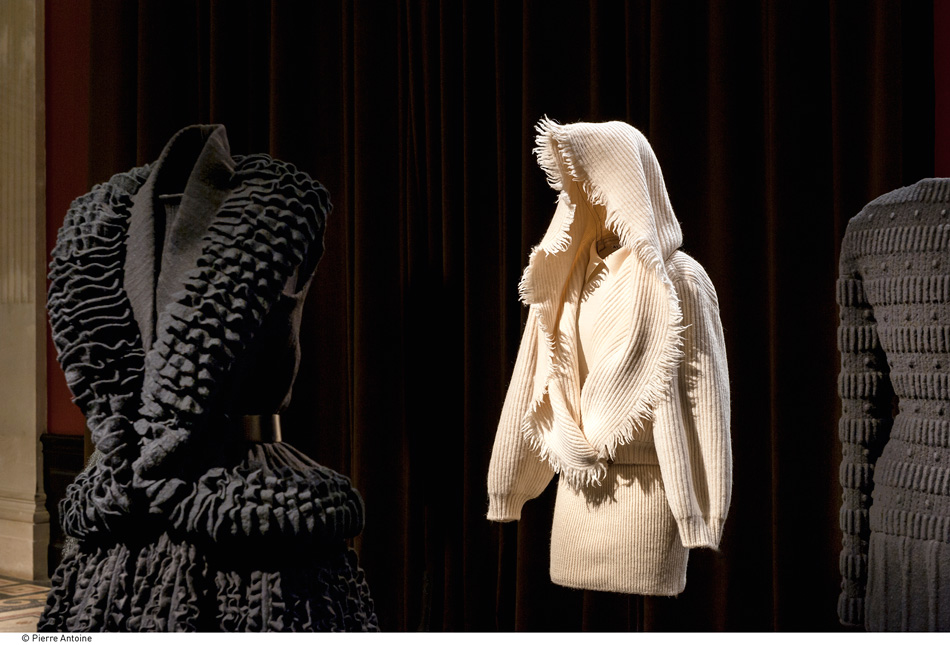 Alaïa is considered one of the “architects of cut.” He is part of the greatest visionaries including Madeleine Vionnet and Cristóbal Balenciaga, all of whom have perfected the levels of designing and crafting a dress.

He has dressed the cream of the crop including Naomi Campbell, Stephanie Seymour, Linda Evangelista, Tina Turner, Grace Jones and more recently, Rihanna.

One dress in the exhibition is inspired by Orson Welles and his film Citizen Kane. The chiffon shows traces of glittering powder, referencing the crystal ball that is shaken in the film.

In 1998 Alaïa was featured in Holland’s Groninger Museum, where his garments were displayed next to the artworks of Pablo Picasso, Jean-Michel Basquiat, Anselm Kiefer, Christophe von Weyhe. Further demonstrating that Alaïa is not just a dressmaker but also an innovative prophet, in 2000 his work was exhibited alongside paintings by Andy Warhol.

In more ways than one, Alaïa’s method towards fashion corresponds to the work of a painter or sculptor. His continuous adaptations and manipulations with form and material obscure the limits between fashion and art.

After relishing the garments in the first four rooms of the exhibition, the observer is lead to the final room, which reveals the ultimate juxtaposition. One copper, hooded dress contains a deep V-neck, a daring open back and triangular cutouts by the legs. Alaïa speaks to the paradoxical dream women have of being embraced as strongly as possible, while staying free. 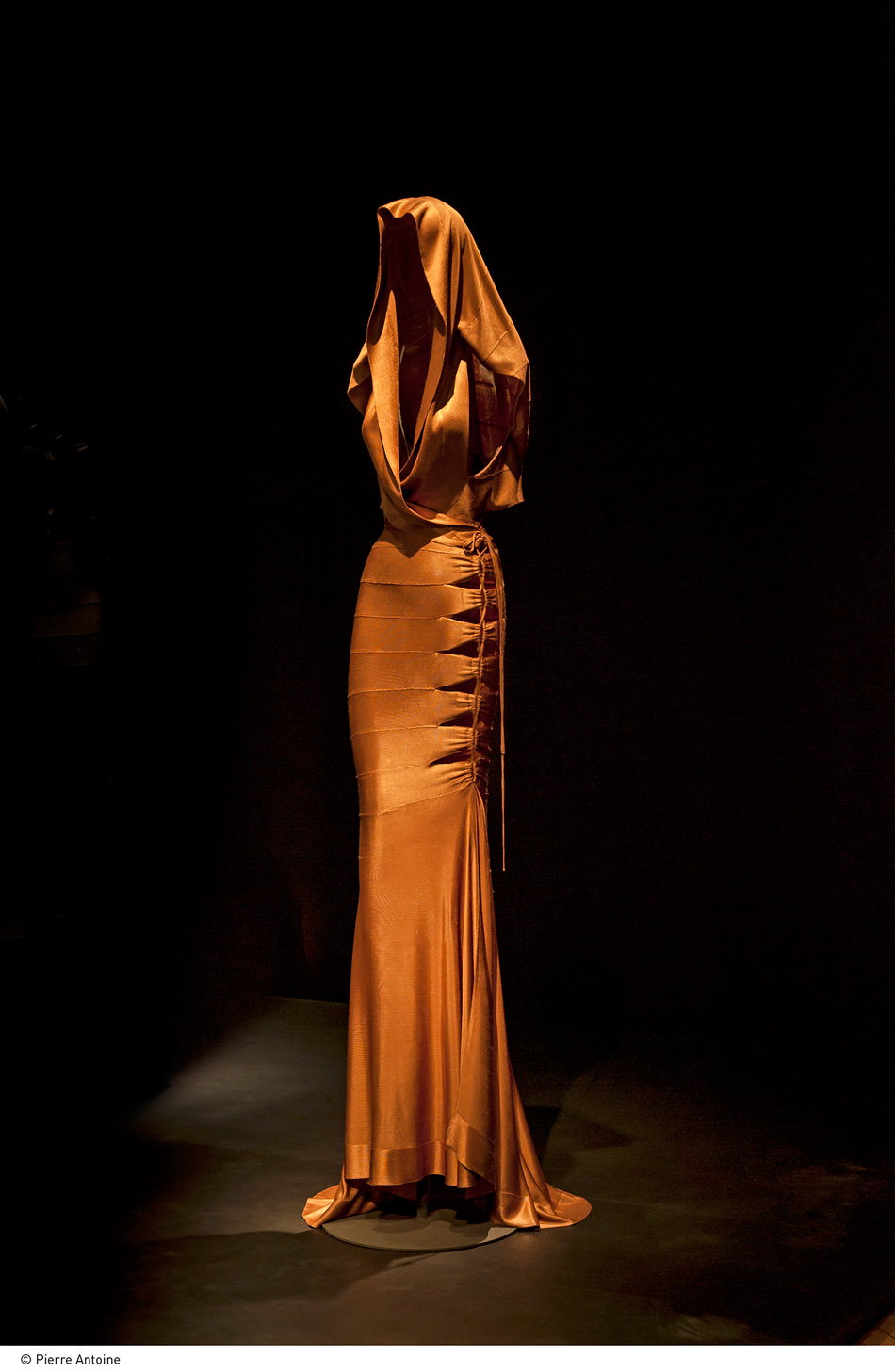 “The success of a dress depends on its ability to disappear,” said Alaïa. His goal is to make the woman seen, not his clothes. If his dress acts as a second skin, either enhancing or revealing a certain asset, Alaïa has achieved his objective in that the observer is able to see the true woman in all her glory. The couturier rejoices in structuring and emancipating the female form. As Alaïa continues his dialogue between fashion and art, Schön! will be faithfully listening.

Alaïa is at Palais Galliera, Museum of Fashion in Paris, France from now until January 26, 2014. Click here for more information.