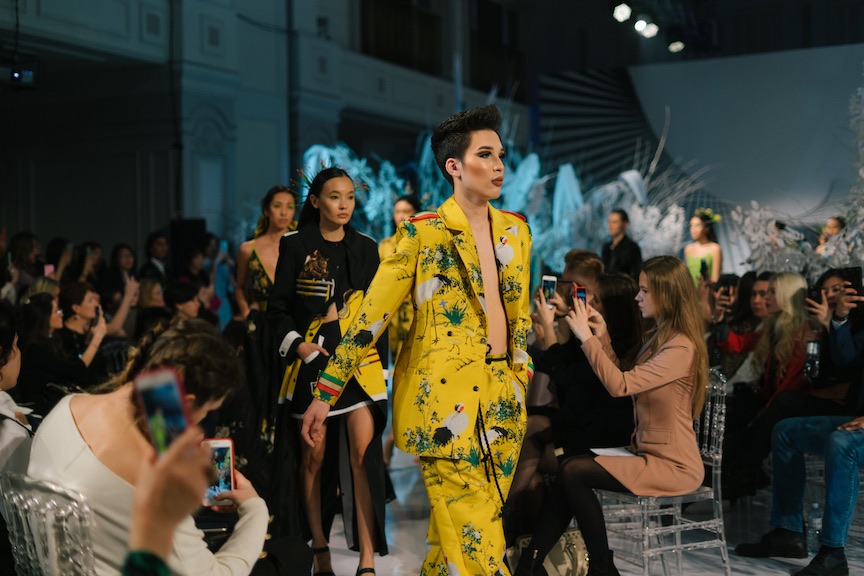 Encircled by the breathtaking beauty of the Trans-Ili Alatau mountains, Almaty is a city truly unlike any other. Once the capital of Kazakhstan, it is now known for both its natural splendour and its cultural power within the region — the city is home to a diverse mix of artists, musicians, designers and more producing work that extends far beyond Kazakhstan’s borders. While some may associate Kazakhstan with tradition and orthodoxy, Almaty shows just how radical this Central Asian country can be.

On December 4 and 5, Visa Fashion Week Almaty took place in the ornate Rixos Almaty Hotel. Schön! was there to get a look at what designers in the region have been cooking up and what we can expect in the future from this unconventional city.

Beginning the week was Kirpi, which kicked things off with a collection called “Lily.” Founded in 2017, the label helmed by designer Lilia Mamieva began with the conceptual mission of blending local retro aesthetics with bright colours, a modern sensibility and her version of gender ambiguity.

This season, Mamieva has veered slightly from the original concept, opting to use this collection to instead “emphasise the beauty of a human in [their] primacy.” In this spirit, she chose the lily as a representation of this collection, claiming it carries with it ideas of “youth, tenderness, femininity and romanticism.” While there is a definite youthfulness to her work, the patterning and style calls to mind looks from the 1970s, something Mamieva herself notes; she writes that this collection in particular was “inspired by the image of a gentle, rambling, feminine and young girl, perhaps Parisian, from the ’70s… This image has no specific prototype — it’s just imagined girl, perhaps one of many, but her image in my perception echoes very much the beauty of the lily flower.”

Spring and summer themselves built the core of this SS2020 collection by BЭLKOVNA. Colour is designer Zhanar Adilzhanova’s self-admitted specialty, and it’s evident in her latest collection. Pieces were ripe with yellows and electric blues, emulating the feeling of the world coming to life again after a long dark winter. While this time of year was certainly an inspiration, Adilzhanova stressed this was a collection to be worn “at any time of the year,” saying, “At the forefront of our collection is the image of a modern woman — strong, beautiful, successful and independent, accustomed to achieving her goals and not wanting to vegetate on the sidelines.”

Mond, led by designer Aizhuldyz Adaibekova, began day two with what the label has called “Collection Z”. The collection was about as zany as you might expect with a name like “Z”: vibrant colours, harnesses, jagged cuts, gender-bending and frenzied designs made this collection instantly memorable. Through every piece, Mond resisted definition, constantly shifting hues and forms while tying everything together with chaotic textiles and embroidery. Naturally, streetwear was a definite influence; the lengthy belt straps and aforementioned harnesses have had a marked presence in mainstream streetwear fits for a while now. But in moments where Mond’s influences were obvious, expectations were defied in other ways, adding a personal flair that left us impressed.

Completing the week were the classically beautiful pieces of Zherebtsov. For those following the label, this presentation may have come as a bit of a surprise. Earlier this year the brand showed an A/W collection full of medically-inspired looks, ranging from face bandages to IV drips to fully equipped oxygen masks. When black-crowned models emerged this season wearing elegant looks adorned with feathers and subtle rhinestones, Zherebtsov managed to catch the crowd and give them a surprise. All this is not to say that Zherebtsov’s works lacked drama — though occasionally understated, looks in the collection had a strong voice and commanding presence, showing the fashion world why they should have their eyes set on Kazakhstan.