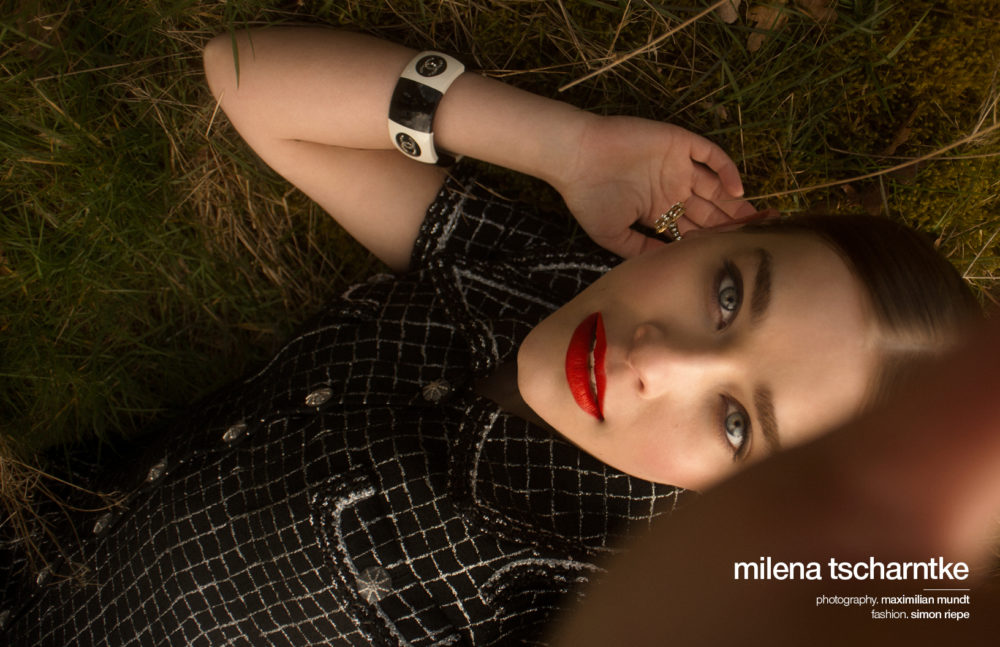 Milena Tscharntke and Maximilian Mundt have only worked together once — but it’s clear from their bouncy dialogue and frequent laughter that they share a bond beyond their day jobs.

Despite their friendship, Mundt jokes that, on screen, they have only played enemies. He met Tscharntke on the train to a costume fitting for the 2016 German film Radio Heimat and the two ended up spending the nearly four-hour journey together. “We stepped out of the train best friends,” Tscharntke recalls — a statement that elicits an audible “awww” from Mundt.

Today, both are occupied with their own projects: Mundt is the star of Netflix’s How to Sell Drugs Online (Fast), while Tscharntke’s film The Roads Not Taken premiered this February at the Berlinale Film Festival. Tscharntke also recently starred in Druck, an innovative web series that rolled out across YouTube, Instagram, WhatsApp and more.

Expanding their work into streaming services has meant more opportunities for the young actors, both nationally and internationally. “You went to England and they recognised you in the subway!” Mundt’s voice is filled with both appreciation and surprise. “Many producers and writers for streaming services are really young and diverse. That’s why they tell a lot of interesting and diverse stories,” he says. “The outcome is that there are very young stories,” adds Tscharntke. “That’s interesting for us, to play these roles.”

This new environment is a far cry from the acting world Tscharntke entered at just eight years old. Still, it was clear to her from an early age that performance was her calling. “There wasn’t anything out there that interested me as much as acting,” she remembers. “I knew it was something I would never get bored of. I always loved how you can step into the shoes of somebody else and get to know their world a little bit.” 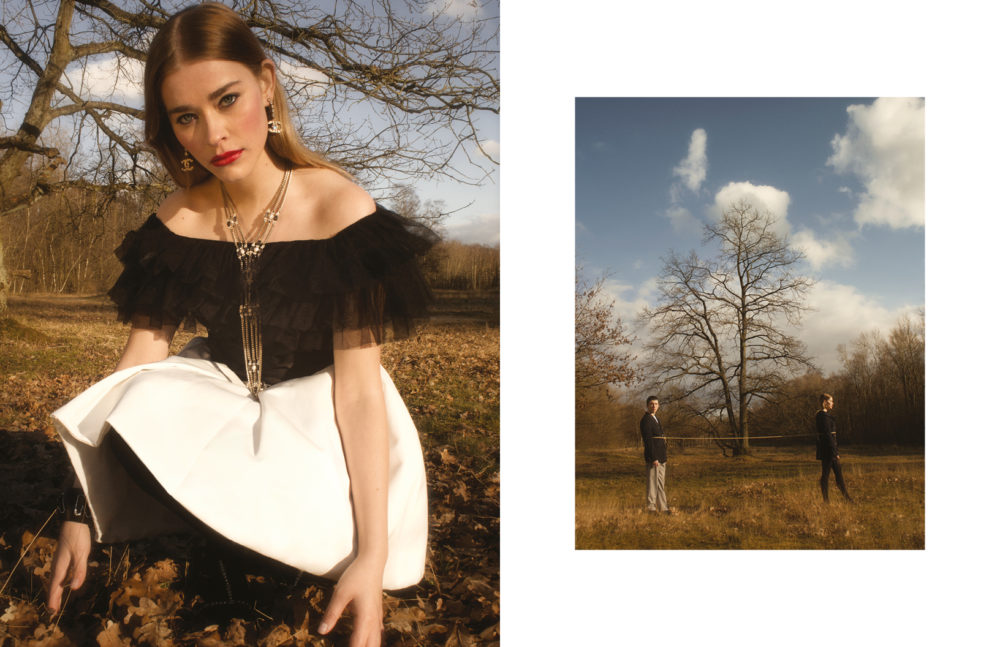 Some changes are more pronounced than others. Today, Tscharntke says she has much more agency — and input — in the roles she takes. “I was more typecast when I was younger and now, I get the chance to play a lot of diverse, different girls,” she says. In Druck, for example, “everybody in the cast had something to give to their roles and the story. The producers were very open to our views because we were very close to the age of our roles.” Mundt shared a similar experience with How to Sell Drugs, even contributing his own artwork to the project. “They gave me the space and the opportunity to put my own ideas into the project, to be with the film-makers. That was really useful.”

Directed by Sally Potter, The Roads Not Taken had Tscharntke acting in English for the first time, a shift the 23-year-old actor welcomed. “In German, I’m very picky with my lines. I don’t want them to sound cheesy, and I always ask myself if they sound realistic enough. In English, I don’t have that as much — maybe just because the language itself is a little cooler,” she laughs. “It doesn’t sound as cheesy or cringy as easily as it does in German.”

For the film’s Berlinale premiere, Tscharntke walked the red carpet wearing full CHANEL. “Your outfit looked amazing,” Mundt interjects, resulting in another embarrassed giggle from Tscharntke. “You get a special feeling from [the label],” replies Tscharntke. “Coco Chanel made it fashionable to wear trousers as a woman, and I still feel that empowerment of women in the clothing today. I feel very strong and beautiful in CHANEL.” 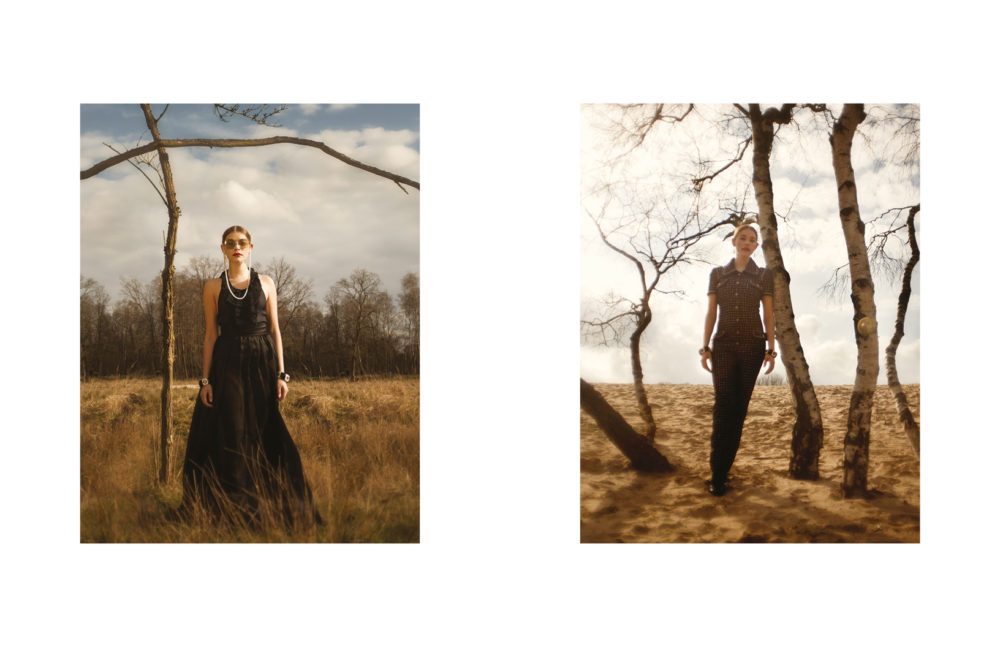 While Tscharntke and Mundt may not have any collaborative projects booked quite yet, that doesn’t stop the pair from joining forces in other parts of life. Mundt is an active photographer and frequently casts Tscharntke as one of his subjects; for example, all of the pictures for this editorial were shot by him.

The two also often prepare for auditions cooperatively, with Mundt using his experience in both photography and acting to “push me to be my best,” says Tscharntke. “Sometimes I come to Maxi’s place with my view of the role prepared, and he gives me other ideas. We inspire each other to look outside the frame.”

At the heart of their work together is a mutual appreciation for the other’s creativity. “Being creative is for me the most important thing as an actor,” Tscharntke states. “You get a script, or you get a scene and you have to be creative to make it interesting.” Mundt continues, adding, “You can’t just be a canvas; you also have to paint yourself.” Tscharntke audibly approves — and they both burst into laughter. 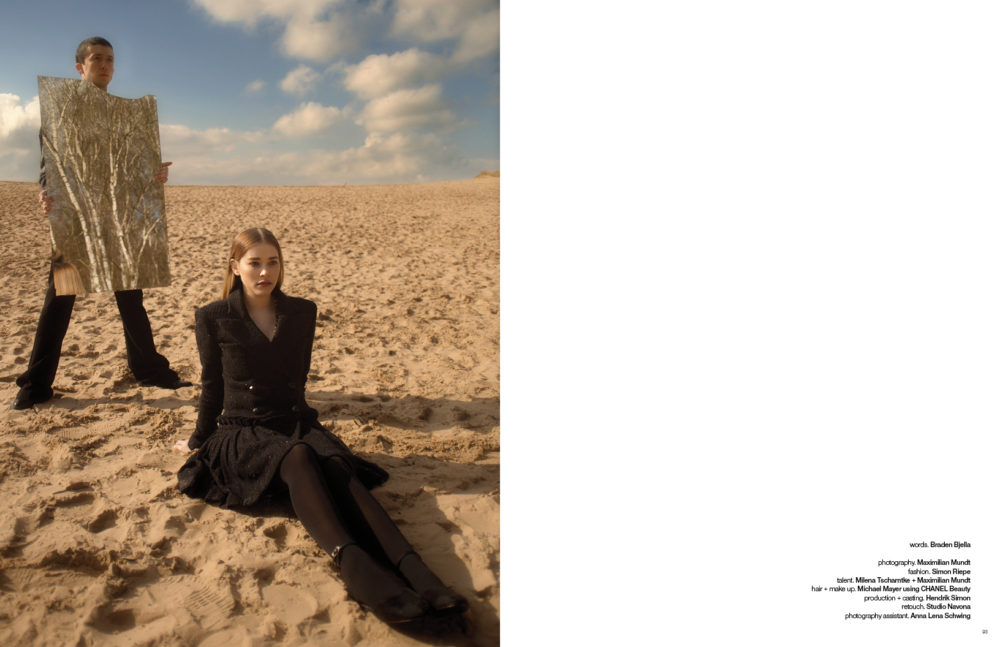 The Roads Not Taken’ will be in cinemas this Summer. Season 2 of ‘How to Sell Drugs Online (Fast)’ will air on Netflix in the Spring.

This feature originally appeared in Schön! 38.