The vast event and hangout space that is Berlin Tempelhofer Feld received its latest attraction with the opening of its very own exclusive Jordan Brand basketball court during the Take Flight – Festival für Basketballerinnen* 2022. The Satou Sabally court took flight in Berlin recently, as the Jordan Brand hosted an event which brought together the local basketball community and celebrated the women that make it.

For those unfamiliar with Tempelhofer Feld, it is a piece of the remnants of what was once Berlin’s controversial and historical Tempelhof airport, a cold brutalist structure that sat on the edge of the metropolis. Currently, the Feld is a popular area where locals gather to party, exercise, and as of late, step into the world of the Jordan Brand. The Satou Sabally court, dedicated to the WNBA Dallas Wings small forward, who is a German national of Gambian roots, doubles as a monument to the city’s multicultural basketball scene and a safe access for girls to play basketball. 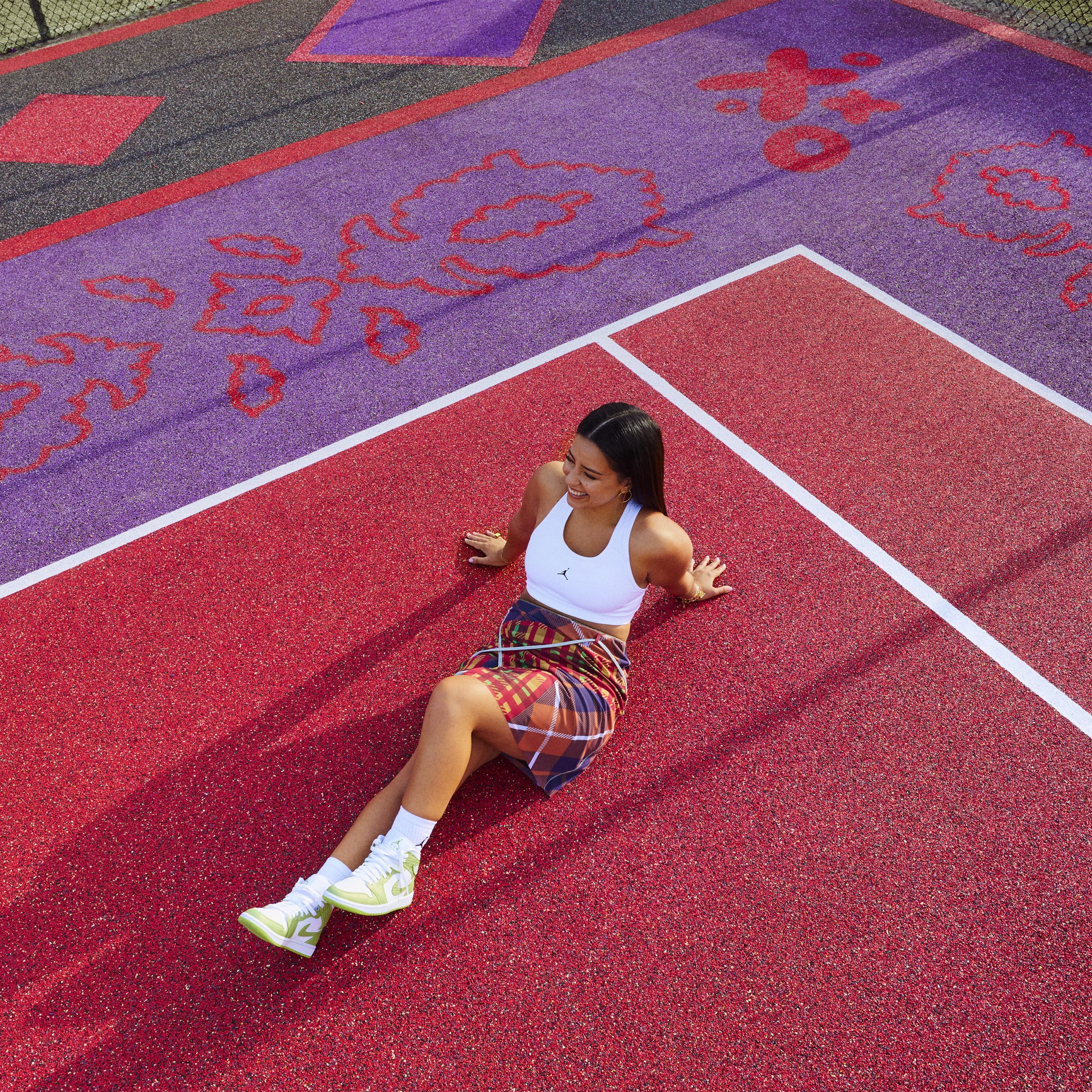 Designed by local artist Bahar Bambi, the court is an expression of her artistic vision, which pulls from her Turkish roots and blends them with contemporary streetwear iconography, such as various Jordan sneakers. Turkish patterns adorn backboards, as a laser red and purple hue make up the overall colorway of both courts and the flooring, composed of Nike Grind, a sustainable material consisting of recycled sneakers and manufacturing materials.

The day-long event kicked off with various community activities: such as skill challenges, a community 3-on-3 tournament and creative workshops, led by Bambi as well as fellow creatives Xuli and Diana Quach. Of course, music is an essential element of basketball and street culture, and the event included a roster of female DJs hosted by Refuge Worldwide, the Neukolln-based grassroots non-profit turned radio station. Special performances took center stage in the evening: first, hip-hop and R&B diva LAYLA, whose glossy single “Pose” evoked total voguing energy, and second, rap queen Badmomzjay, who came on to congratulate the players of a local girls All-Star match. 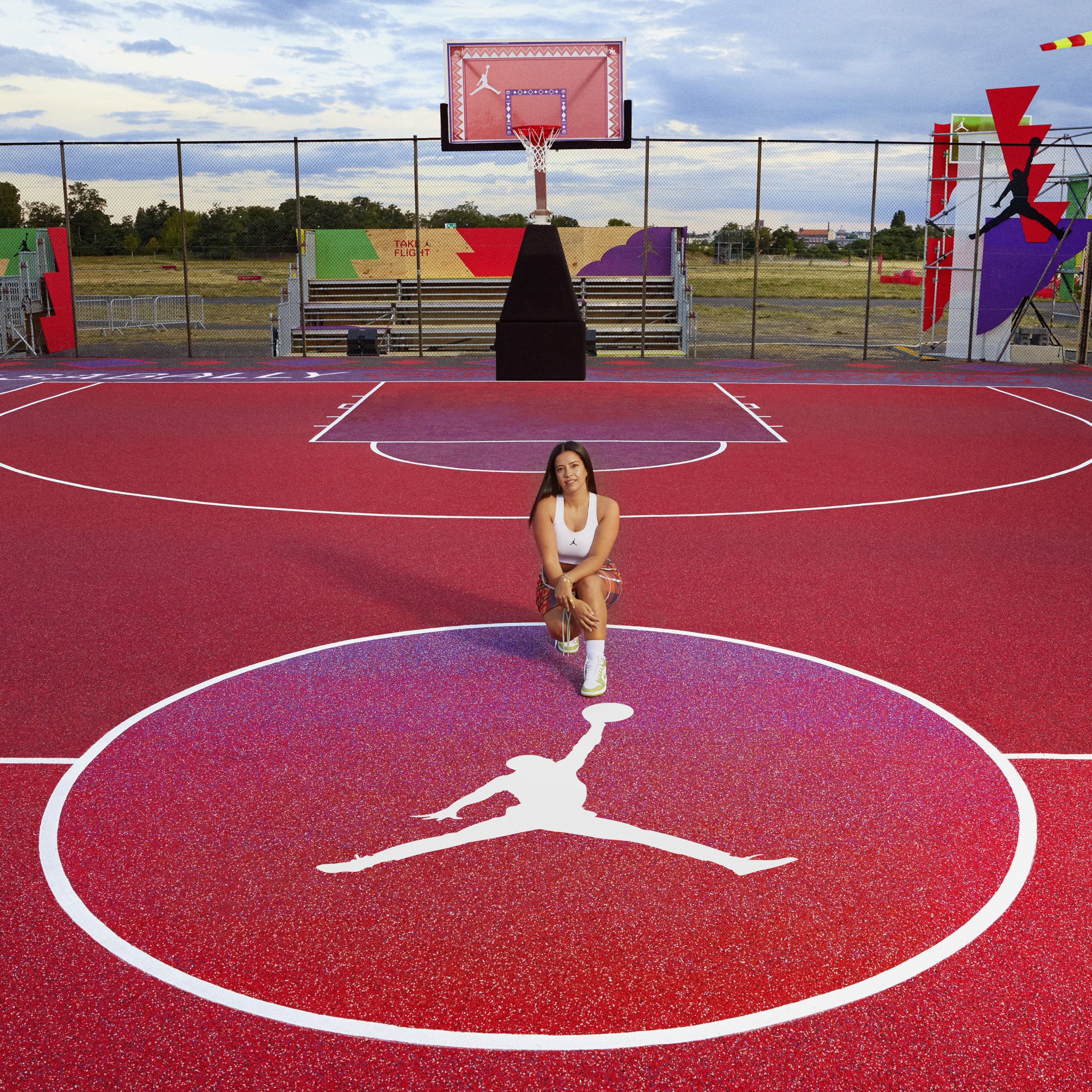 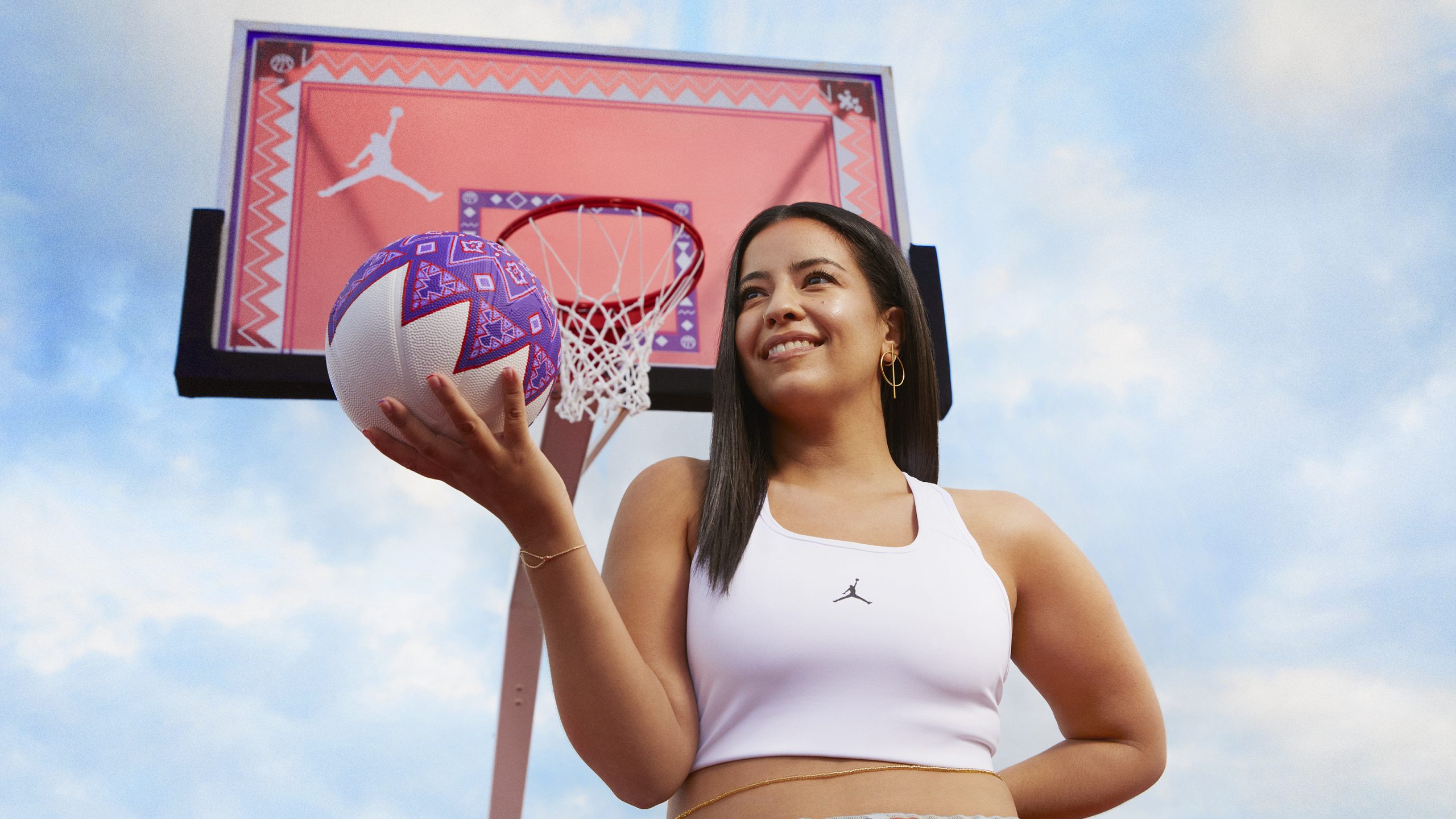 A unique platform to showcase the wide-ranging talents and inspiring women that inhabit the intersection between basketball, art, and music in Berlin – the Satou Sabally court is now open for hooping and represents a safe space for girls to play. Girls, as well as Nike members looking to work on their game and break a sweat, can book their spot in weekly practice sessions through July into October, hosted by coaches from local partners and basketball institutions like the Sp0rt365, Berlin Braves, Seitenwechsel, Türkiyemspor, Ballsie and Gangway.

To celebrate the opening of the Satou Sabally court, Schön! Magazine chats with Bahar Bambi about the creation of the design, her artistic process, and more.

Why was it important to you to create the basketball court in Berlin to bring together your Turkish roots and Satou’s Gambian heritage?

Satou and I are both from Berlin. To be able to create a basketball court in our hometown is very special. We were not only able to create a safe space for women*, but also to inspire the next generation to follow and chase their dreams. It kind of feels like leaving a footprint behind in our city.

What was your artistic design process when creating the court?

The court is a dedication to Satou Sabally and it represents inclusivity & diversity. Therefore, I wanted to bring different cultures together and decided to fuse her Gambian culture with the Middle Eastern culture.

What was it like collaborating with Satou on this project?

It was an amazing experience and I loved working together on this with her. It was also very emotional because this has been a dream come true for both of us. She is such an inspiring person with a beautiful soul and is very open-minded. I feel honoured to have been part of this collaboration.

How have your Turkish roots and the city of Berlin inspired and influenced you both as a person and in your career as an artist?

I was born and raised in Berlin, but both of my parents are immigrants from Turkey. Berlin is a very vibrant city and I’ve always been amazed by the street art & graffiti when I was younger. Turkey has been a second home to me. I vividly remember my grandparents hanging rugs up on the wall as an art piece and my grandmother used to weave traditional rugs herself.

Growing up within two different cultures can be enriching but also raise crucial questions regarding your identity and belonging. You were never fully accepted in both cultures. As I got older, I came to the understanding that my generation is a combination of both and we have created a culture of our own. This is why I decided to bring those two cultures into my work. Although they are very different from each other, it creates beauty when bringing those on one canvas.

Some people might not connect art and sport but both industries aim to give people an outlet to express themselves — whether that’s through painting or shooting hoops. As an artist, did anything surprise you about working on a project involving sports?

Not at all. Linking my work to basketball is very special to me, as I view both as universal languages and the court as a canvas. Art and basketball allow us to connect across cultures and borders. This is what my work is all about: Bringing different cultures together. In this case, it is fusing Art & Sports.

Was there anything that you learned about yourself or your community while working on the court?

You always grow from the experience and working on such a big project is one kind of experience that helped me to grow a lot more as a person and an artist. This court project has been a dream for many years. I learned how to be more patient and that dreams come true as long as you continue to work hard and believe in yourself. 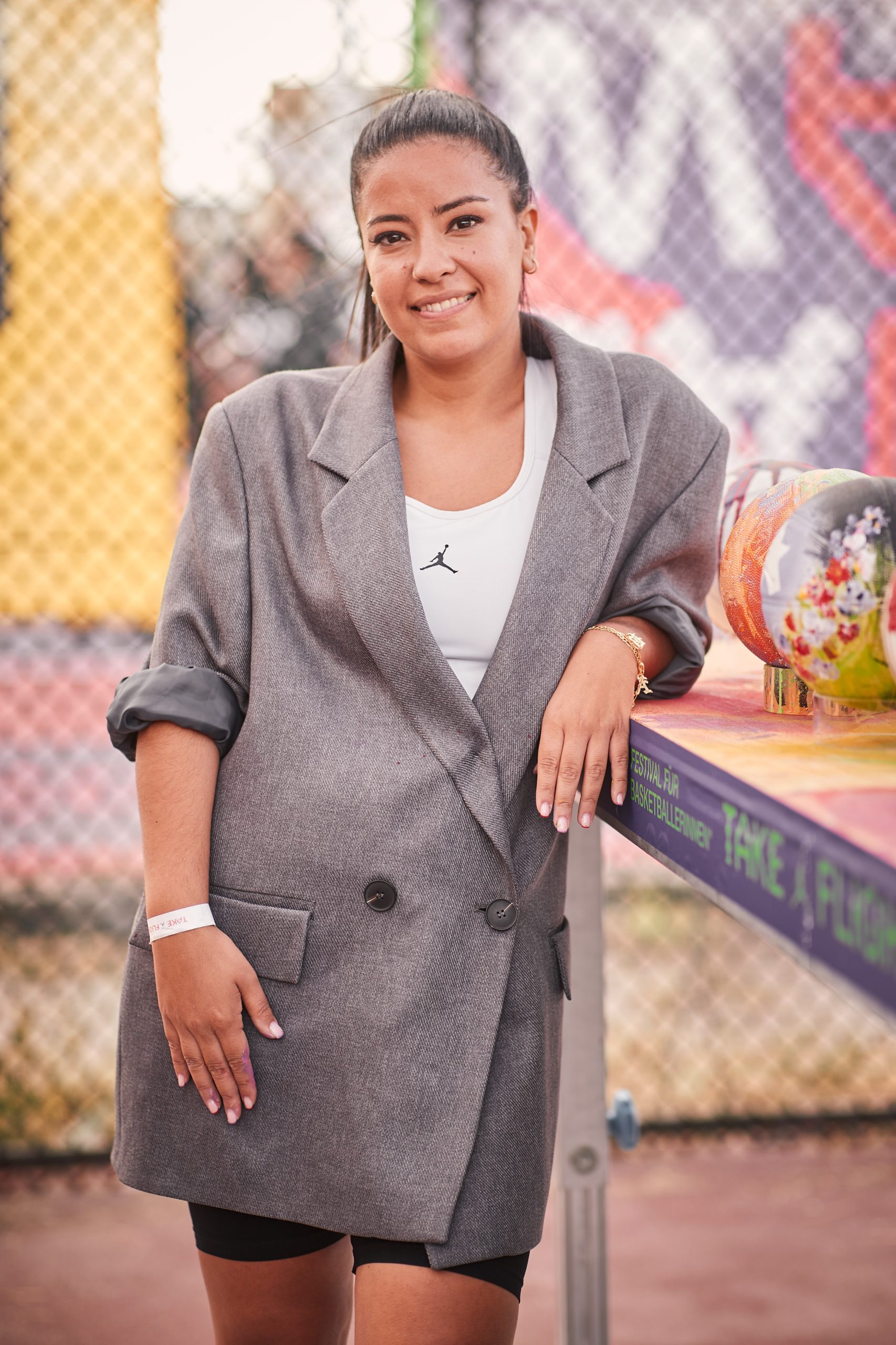 You both want to give back to the BIPOC community and hope to enact further inclusivity in the future. How do you think the court helps drive change?

The Satou Sabally Court pictures diversity & inclusivity in many different ways. It is the first public court in Berlin which has been created for women. In particular, it continues the dialogue on female empowerment — a safe space where you can express yourself freely. It also shows the inclusion of cultures through its design and pattern, which I’m sure the BIPOC community will be able to identify themselves with.

What do you hope people feel while looking at the art and playing on the court itself?

Colours increase creativity, happiness and productivity. I’m hoping that they will be able to connect through the details, and patterns and be inspired by the colours we used. I see the court as a big rug — a home court, which hopefully will give the community a safe feeling.

Lastly, what do you want people to take away from this project?

This project goes beyond art or basketball. I have a quote I aim to live by “If you can see the invisible, you can make what seems to be impossible. “ I hope that we will get to inspire the people who see what we have built together. It is a dream come true, which didn’t happen overnight. But through lots of patience, dedication and hard work, we made this dream become reality.

Follow Nike Berlin and find out more about the court here.