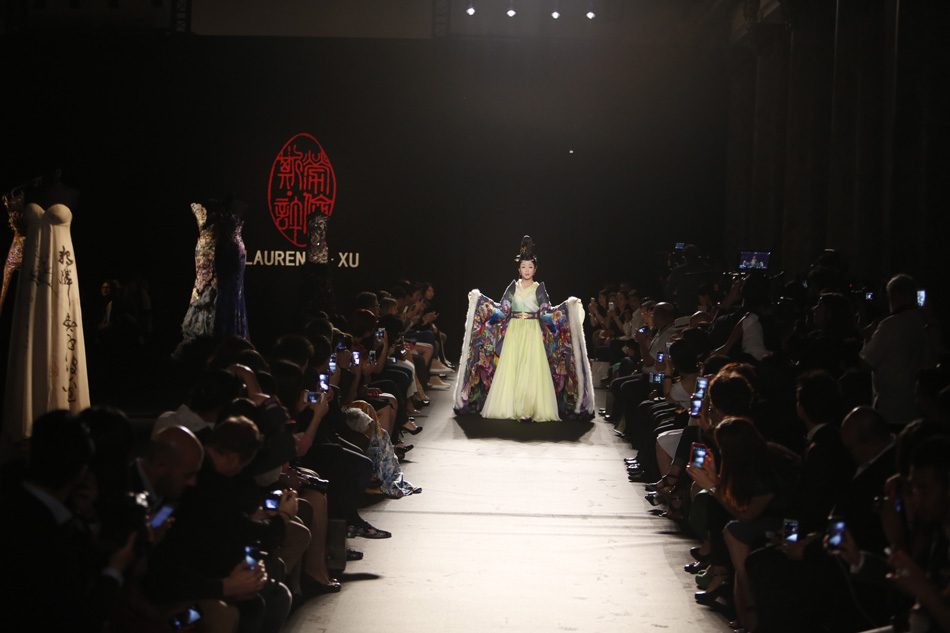 The excitement was palpable as guests rushed into Laurence Xu’s Haute Couture runway show. All was a commotion of Prada sunglasses, silver Chanel chains, Ferragamo bows, and Dior handbags, proof that there were several A-Listers among the spectators. This was Xu’s first haute couture show in Paris. The Shandong born, Paris based designer placed an enormous wooden loom from the Nanjing Yunjin Museum at the end of the runway. Two women were at the bottom of the loom, weaving a floral pattern of peacock colours. One man was on top of the device, interlacing cloth as well. Six extravagant dresses were displayed in the middle of the room like a museum. Xu did not just give a runway show; he provided an interactive fashion experience. The room was set as a couture installation paying homage to traditional Chinese prints, calligraphy, and the intricate craftsmanship involved in creating such detailed gowns. 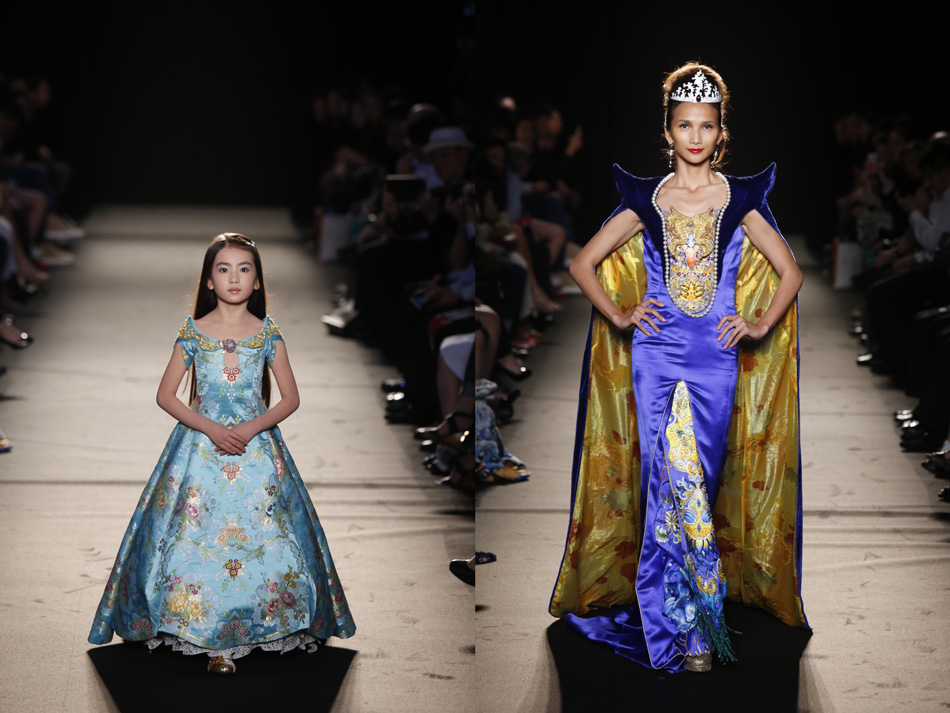 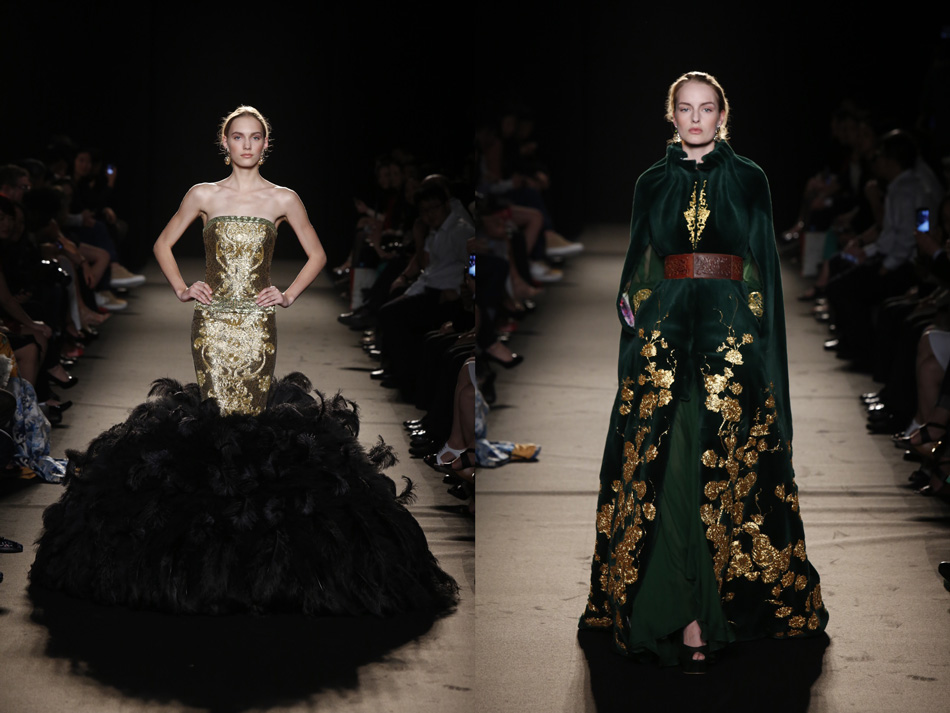 The haute couture spectacle opened with Li Yugang, one of the world’s best-known Chinese opera singers. He twirled his yellow gown while singing high-pitched notes. A clear supporter of the traditional Chinese arts, Xu shone as he sent out the first look of his collection… on a young girl. She wore a teal floral gown and glided like a princess. We saw a vision of what she becomes as the second model, this time a woman, strode down with a cape attached to an open back dress. The model was crowned with a tiara, which set the royal tone of the show. What followed after was a series of deeply luxurious gowns in brilliant colours. Xu built the body of his haute couture using Chinese patterns of dragons and flowers as the veins and Western silhouettes as the skeleton. One example is a one-piece body suit with bellbottom legs, adorned with golden and black floral motifs. 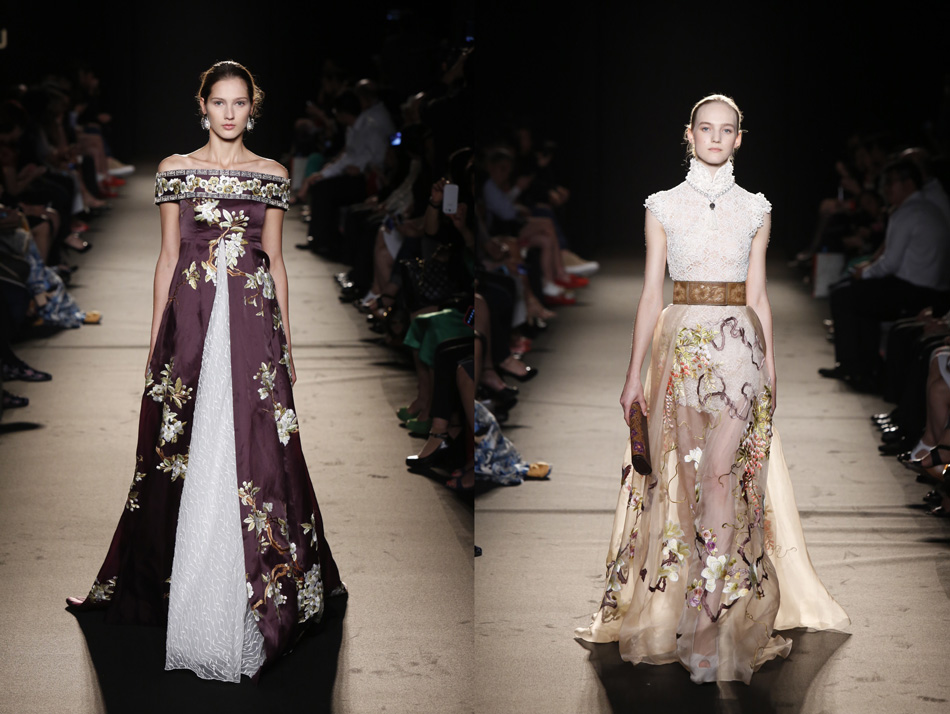 Xu reinvented the traditional Chinese qipao (form fitted dress) in modern ways by cutting it short, creating redefined slits, and playing with sleeves or lack thereof. Trains were elongated and feathers were meticulously worked into garments. One elaborate gown had as many ostrich feathers as the dress had stitches. Another emerald fur number, laced with golden leaves, appeared as if it had popped out of a medieval fairy-tale.

The performance ended with Chinese actress Pace Wu dressed in a romantic bodice of pearls and navy skirt. It all becomes clear that Laurence Xu is the embodiment of the phrase, “Go big or go home.” 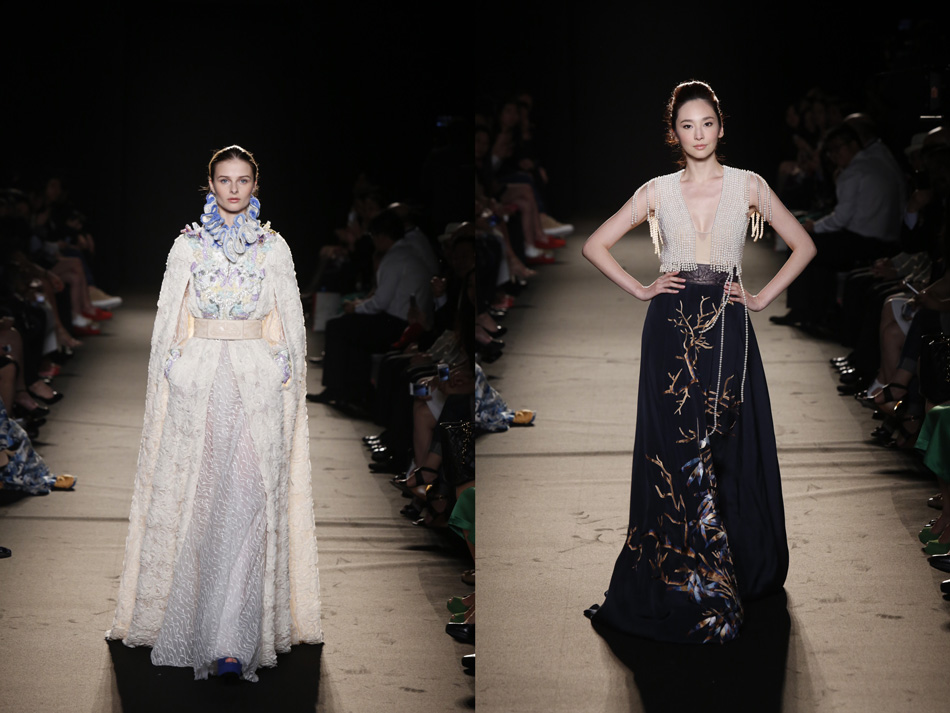