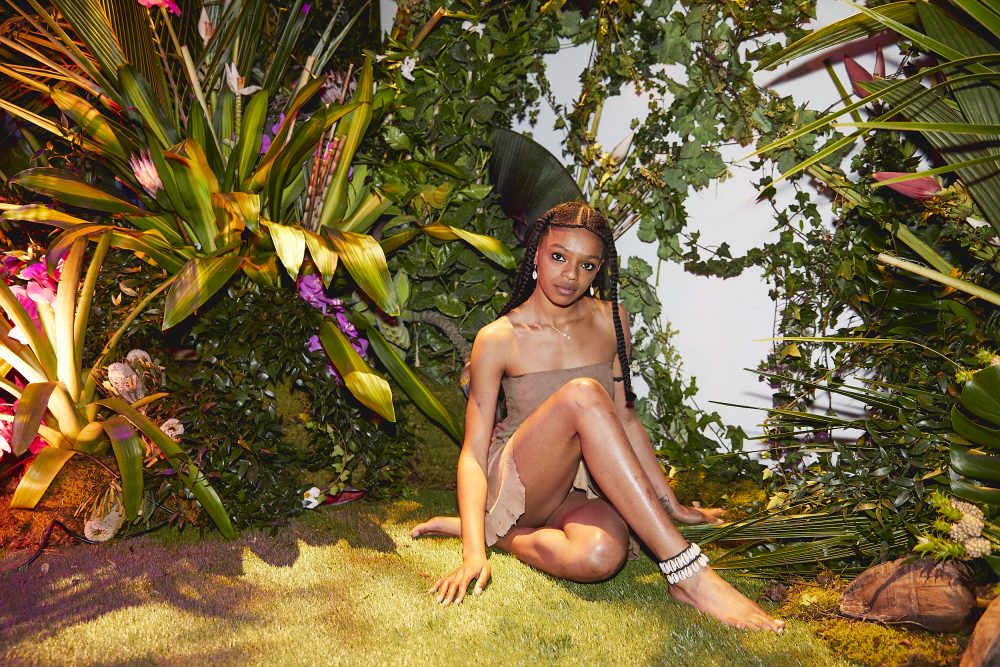 Cities are rife with tire and tumult. For some, this is welcome; for others, urban survival is only possible with occasional returns to nature. While some may leave the city to find this lushness, artist Selah Marley opts to bring it home. In a new show, entitled A Primordial Place, Marley fabricates an entire environment placing the beauty of nature within an immersive manifestation of her conscious and unconscious minds.

Although this is Marley’s first art installation, it is not her first exposure to the creative world. Marley comes from a talented family, beginning with the grandfather who brought her surname to fame: none other than Bob Marley. Her mother, the endlessly accomplished Lauryn Hill, also shares similar esteem. However, Selah cannot be defined by her family — even if their interests tend to overlap.

At only 20 years old, she’s already had a successful career as a model and musician, so her present arrival in the art world feels only natural. With her first installation opening today in NYC, Schön! talks to Marley about her inspiration, her career and how to blend a digital and natural life — and get a lot at what when down at the installation’s opening night. 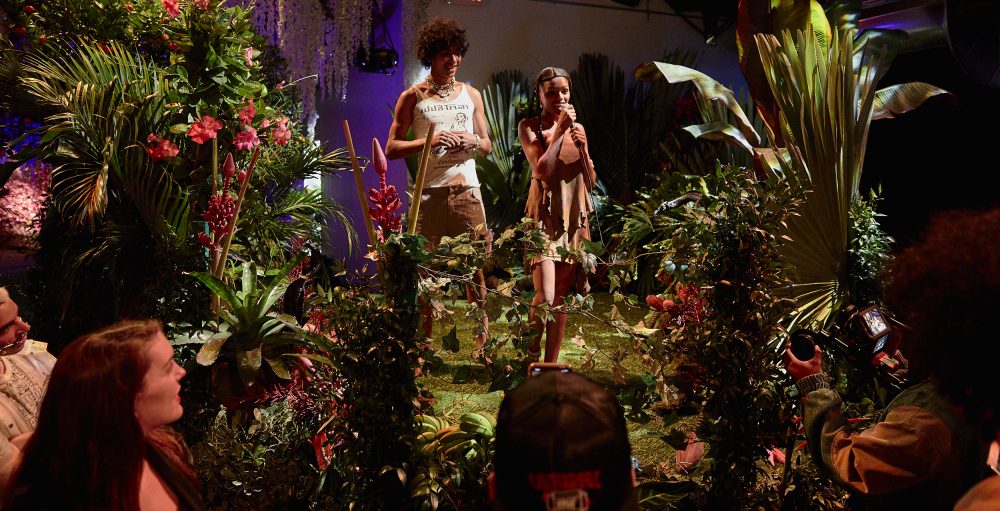 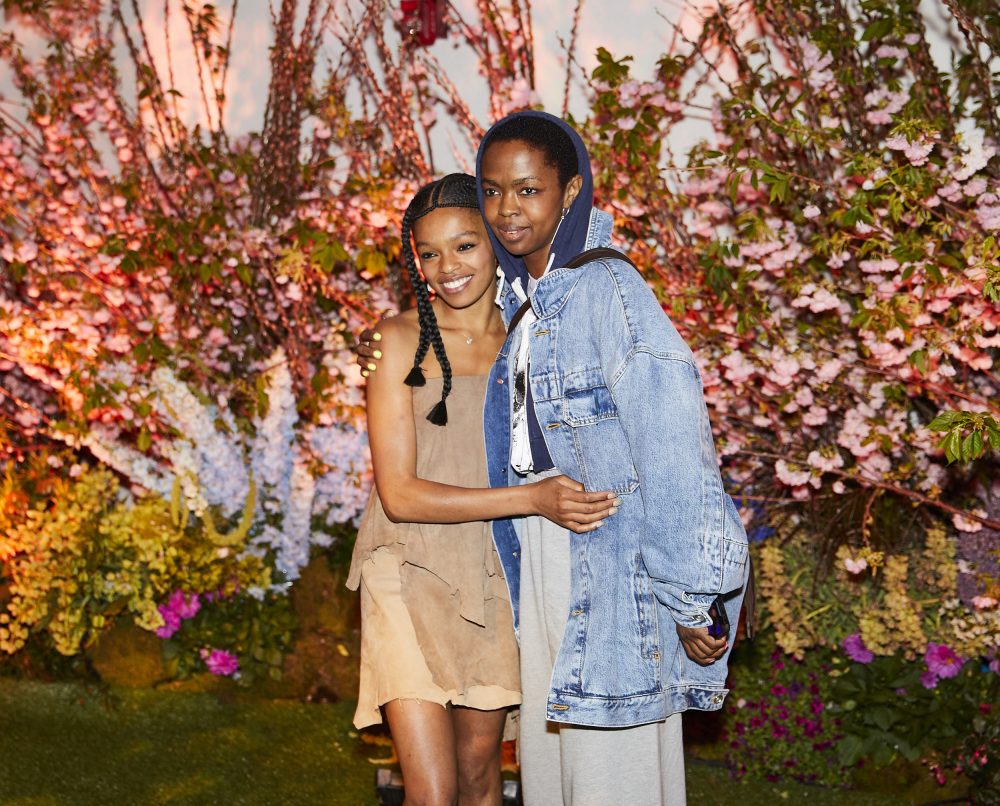 What’s funny about this installation is that I originally wanted to throw a birthday party for myself, and it was simply a spark in which I saw this “blacklight circus jungle party.” Shortly after, I realised that what I was looking to create and execute wouldn’t be possible in 14 days, so we extended the dates to a feasible time and I decided to transform it into an installation. Ultimately, it was as simple as an internal vision that I felt compelled to manifest.

Was there anybody in particular who motivated you during this installation, or anyone you found especially helpful in the process?

Yes. My boyfriend and my production manager have been the backbones to this entire event. My boyfriend, Michael, who is a complete creative force, helped me flesh out all of my ideas and has been extremely supportive and helpful in the entire process of seeing this project through. He even designed one of the pieces that you’ll see! I’m so honoured to have his love, support and help throughout this entire project.

My production manager, Justin, has also been there from the idea’s spark to its completion and has helped me with all of the logistics and took a major load off of my shoulders in this process. He’s really been a right hand in the creation of this piece. If I’m the right brain, he’s the left. Not to mention, City Point in Downtown Brooklyn gave me the venue… how could I not feel the utmost levels of honour?! 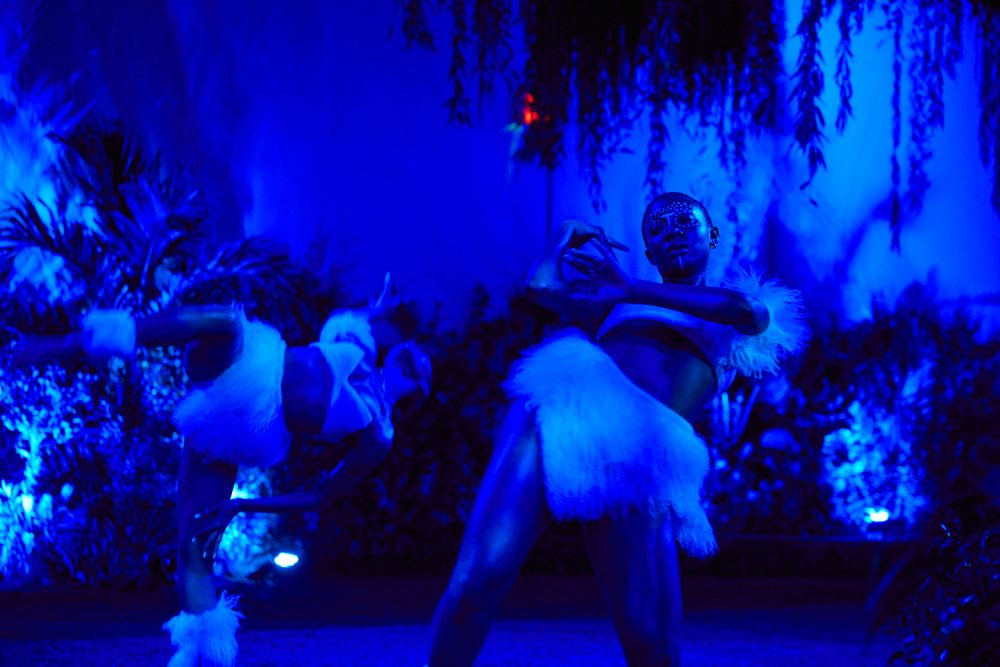 A Primordial Place features mainly naturalistic elements. You live in the city now – do you find you’re more at home in the city or in nature? Why do you think that is?

It depends. I don’t get to see nature too much anymore — true, raw nature at least. And I miss it. I have a serious sense of longing for the natural world, which is ultimately what led me to create this piece. If I can’t have it, I’ll just bring it to me. I genuinely just feel at home in nature. There’s not much to explain besides the fact that there’s this intrinsic pull to be there, whether it’s a beach or a forest. I must say, however, that I do lean towards the tropics. When I was younger, I was able to access my roof through my bedroom at my mom’s and I would always just go up there to look at the moon. It was just this peaceful, personal experience of mine, whether I was meditating, or talking to the moon, or bringing my friends up there as we talked and smoked, and of course, looked at the moon. I just felt so at home.

The city can be a wild place. It’s a nature unto itself — a human nature, in which you get to experience this certain primal nature and activity of humanity. Nothing is censored there, and you get to witness, or participate in, the wildest aspects of humanity. There are no rules. It’s very easy to lose yourself, but in a way, you find yourself in that process — a new version of yourself, that’s definitely more intuitive and experienced. It’s not for the faint of heart, though. Personally, I’m deeply saddened by all of the gentrification and subsequent erasure of New York’s history. I feel like I moved here 5 years too late, honestly. I do still experience a taste of what it was, but I know it’s changed. My current question is, where has it gone? (Must be somewhere.) 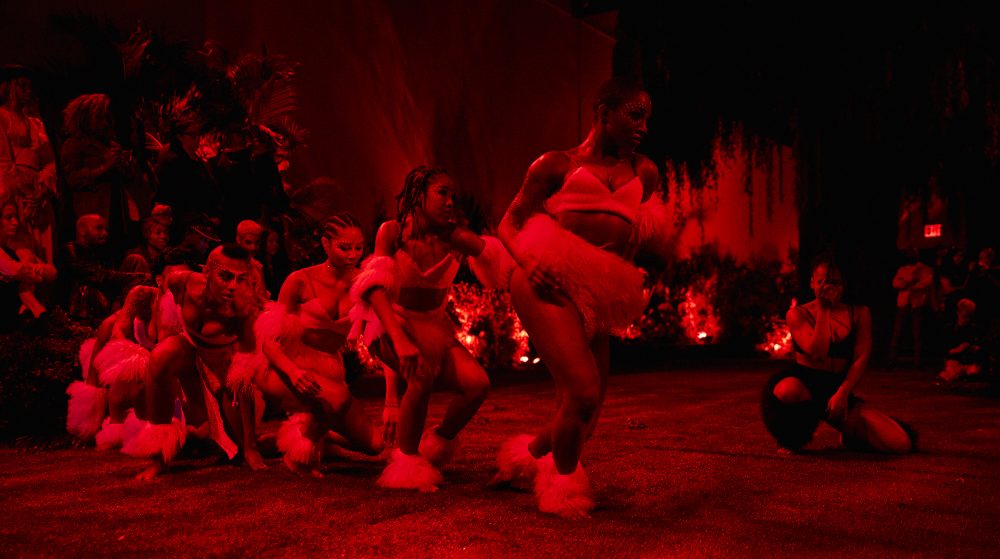 Why did you settle New York for the show, and how do you think the show’s location will affect how people react to it?

Well, for one, I wanted to have my party in New York and I received the venue free of compensation from City Point, so who wouldn’t have their event there? Not to mention, it’s ginormous and beautiful and raw, so there’s so much room to play around. The venue feels like a playground. A home for those with a wide and ambitious imagination. Anything can happen there. Truly, I’ve been given zero limitations, and so I feel so free. I definitely think people are going to be shocked by the space. It’s huge.

Are there any artists or other figures who have inspired this installation?

I definitely received subconscious inspiration from Rihanna’s lingerie show last year. I just loved the fact that she brought the natural world to New York. Other than that, nothing much other than my own dreams and desires – and Pinterest for helping me find all of my reference photos.

What’s the most valuable thing you’ve learned through this art installation process?

Time, time, time. And that I’m gonna go broke for my craft – time and time again, especially when you’re independent. I’ve independently funded this entire piece myself, and so maybe I’ll say that you should make sure you can buy your installation three times before making it, lol. But I also think that speaks to the sacrifice that comes with something dear to you. When the time is right, you can’t control it. You just have to allow it its space and trust that you’re walking in the right direction. You can’t control creativity, you just give it space to exist.

You’re pretty popular on Instagram. Considering the themes of this installation, how do you balance the digital and natural aspects of your life?

Quite easily. I still don’t completely understand it sometimes, but I do genuinely spend as much time connecting with friends in real life—if not more—as I do on the internet. I don’t feel robbed of natural experience and I’m still able to connect with those away from me at the snap of a finger, along with the inspiration I get from the digital world (& ASMR hehe) and the ability to document!

Your interests extend beyond just installations. Last year you released a short film, C’EST LA, with director Godfred Sedano. How did you meet Sedano, and what was the brainstorming process for the final video like?

My friend, Kevin, put me on to him! And then we just started. It’s funny, because that video was supposed to be an introductory piece to a larger piece that I wrote that I needed funding for, and so we figured that we’d make a smaller piece that we could use as credentials for funding. However, again, I just envisioned all of these separate scenes that I wanted to see exist, and then some we just created on the spot.

No. I see it more as an aspect. I love the art form of modelling, but I despise the commercial world that it gets magnetised to. Now, I only want to model if I can create the scene in which I’ll exist. Unless I’m working with a team that I absolutely adore that honours creative freedom and is boundless, I’m not too interested in it anymore. I’m all for independent projects these days. 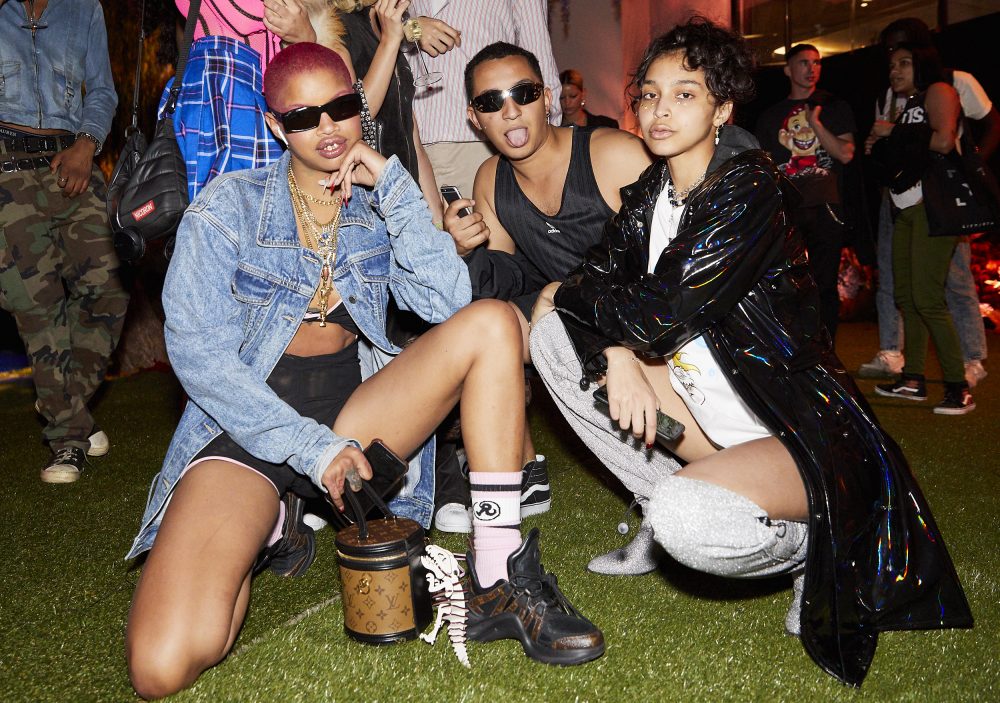 Your recent single, 500 Days, is delightfully noisy. Obviously, music has always been a part of your life, but when did you begin to release music yourself, and what motivated that decision?

Delightfully noisy… sounds about right. I have released bits of music here and there. I’ve always recorded music to myself very privately. I probably have over a thousand collective voice memos at this point, if not more. I think that I refrain from releasing music for two reasons: one, I’m a perfectionist & two, I make a lot of “incomplete” tracks. If I could release voice memos, I would—which I can, but I’ve always been advised away from that, which I find severely annoying and oppressive. Ultimately, I’m a very raw musician. I want to sing a capella and release tracks that I sang through my phone. I think it’s hard for me to “finish” songs because I am a feeler. Once the moment is gone, it’s gone. Trying to finish something that you didn’t “complete” in the moment is nearly impossible. It’s like trying to time travel, or place yourself in a world in which you no longer exist. It’s because sound is expression; just as you talk, I sing. It’s a form of communication. It doesn’t need to be so controlled. It’s just what you felt at that time, why try to manipulate that?

Who are some musicians you look up to or admire?

Frank. Ocean. Frank. Ocean. Frank. Ocean. He’s been an artist that’s existed in my ears for a long while now. I’m always astonished by his work and I always feel like he’s speaking to me, or for me. I also always loved Drake growing up — biggest celebrity crush. Kanye? Duh. My Beautiful Dark Twisted Fantasy? 808s? Genius doesn’t even encompass his artistic sensibility — ranging from his first collection to his consistent sense of style, I truly adore him.

And ha! My mother? If I could be half the woman she is, I’d be satisfied. My mother is not only my best friend, but also my mentor. She’s really taught me everything I know. She’s the reason I have the wisdom and intelligence that I do, I’ve stolen half of her books and placed them in my house. Her style is impeccable and the reason I’m so familiar with an extensive understanding of fashion, whether I was even aware of what I was touching. She truly exposed me to a world so unique and free. I think that, however, is the greatest gift I got from her—freedom.

You postponed going to NYU to focus on other aspects of life. Do you have plans to return, and if so, what do you want to focus on while you’re there?

Hmmm. Not right now. If I did though, I’d study film, neuroscience, physics, biology, African studies, social economics, psychology, world history, music theory, and I’m sure I could go on and on about the things my mind would love to explore.

What other projects do you have in the works right now, if you’re willing to share?

More installations — if I can afford it —, sounds, visual films, design and things of the sort. 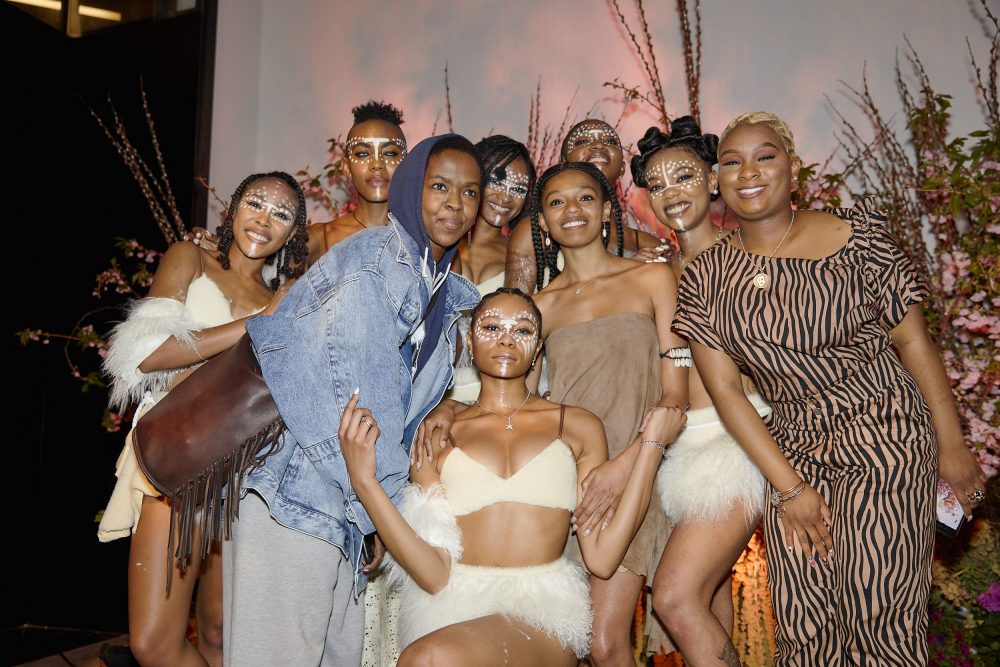 ‘A Primordial Place’ is currently on display at BKLYN Studios in New York in celebration of Earth Day. More information is available here.