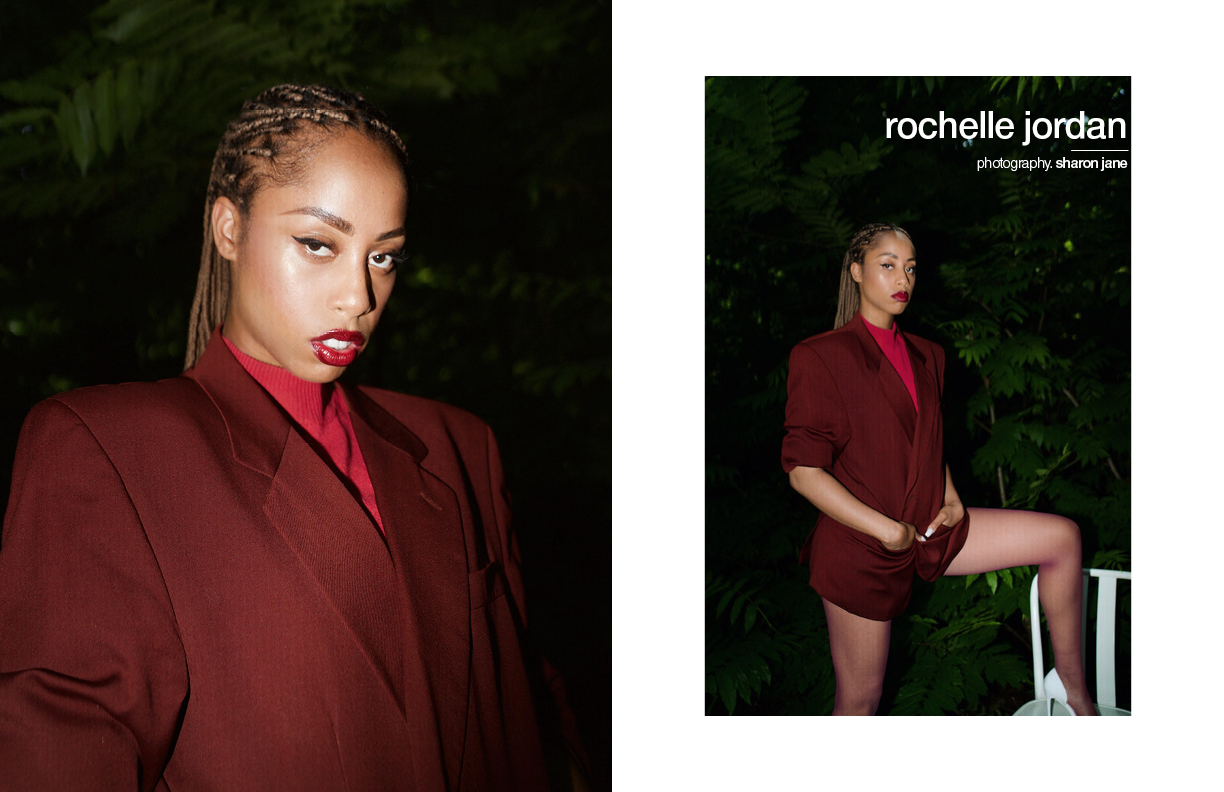 Innovation is key to British-Canadian singer Rochelle Jordan. She fuses the futuristic with the ancestrally soulful sounds of R&B. To listen to one of Jordan’s songs is to absorb a subtle blend of sampledelic 90s pop, vintage UK house and garage, airy late night ballads and progressive hip-hop.

Born in High Wycombe to British-Jamaican parents, Rochelle and her family relocated to Toronto in the early 90’s. Her experiences of moving around the world to now settling in LA are what have made her “fearless when it comes to trying new things,” she says. Filled with style and imagination, her recent album ‘Play With The Changes’ showcases her personal evolution and presents her as the modern heir to a lineage of power house vocalists from Whitney Houston to Céline Dion, Aaliyah to Amerie, and Kelis to Mariah Carey.

When did you start getting into music and how did it evolve over time?

I got into music at a very young age. I’d say around the age of nine or ten. Pursuing music became an actual dream of mine around the age of 16 and that’s when I started writing songs.  As I exited my teens I started recording little demos in Toronto. Not long after that I met my producer KLSH over YouTube who spoke the same musical language as I did. It’s been nothing but creation and evolution ever since.

What was the process of getting into music like?

It’s been cruel and beautiful, from feeling defeated to then feeling like a conqueror, but the process of an artist is supposed to consist of all the things so we can put it into art and reflect it back to those who can relate. So, I’m thankful. I think that I have the spirit of both my mother and father, with all they have been through in their lives together and individually, and their ability to push through whatever came their way. They really are some of the most courageous, most faith-driven people I have ever known. So, even though I was in Canada in a small town, I still had faith that I’d be able to somehow leave some footprints with my music.

Who are some of your biggest musical influences that have helped you shape your own sound?

As far as vocals and what I studied the most goes, there are so many. But I’d have to say Mariah Carey, Amerie, Aaliyah and Whitney Houston…with a sprinkle of Michael Jackson, Earth Wind & Fire, Drake, and Fred Hammond on the side. I am a collection of so many different influences; I feel bad because I can’t list them all!

You moved from the UK to Toronto at the age of four. How do you think this past experience helped shape your music and identity growing up?

I honestly feel blessed to have been submerged in so many different cultures and countries throughout my life. I think by naturally absorbing and embracing all these different cultures, people [and] sounds it contributed to me being a little fearless when it comes to trying new things whether that means moving to a country I don’t know or bending my soul sound into different genres and spaces. Toronto is such a melting pot that it’s possible my mentality and music might reflect that at times.

What’s been the biggest risk that you’ve taken in your career so far and has it benefitted you?

I think the biggest risk in my career was making the decision to actually pursue it. I often say it takes a level of delusion to bet your entire life on creating art in order to survive in this world. So, cheers to delusion! Yes, it has benefitted me greatly because I’m happy.

How would you describe your sound and style of music? Is it constrained to a particular genre or is it something you prefer to leave undictated?

I describe my sound at this point in my career as soul music that is genre-bending. Electronic, Dance, R&B? All of that. It’s up for interpretation, and most importantly, it comes from my heart and a place of challenging myself as a creator. So I try to just create without thinking too tough about the boxes and let go.

Are there any key concerns and topics that you hope to shed light on  in your music?

I have a few things to say and I say them when it’s right for me. I don’t ever put pressure on myself to create or say anything so specific in the hope to save the world because – for me – that is too heavy to carry.  But I always express from an honest place on a range of topics and I trust myself to come through with the right words that need to be said to someone who is ready to listen.

What’s been the most defining moment in your music career so far?

I think hearing myself on the radio for the first time in 2012 was a moment that has never escaped me. I was so shook. I had to turn it off.  My best friend literally fought me to turn it back on. I was shy, nervous, shocked and excited all at once. I was in a state of disbelief but it really confirmed to me that I was on the right path.

You’ve just released your latest album Play With The Changes. Is it a shift into a new style for you or inspired by your classic influences and sounds?

It’s a shift for my day ones for sure as they know me mostly for my slow tempo R&B tracks. But it’s not for me. I stepped into creating different sonic spaces for myself as soon as my 2014 album 1021 came out. I’m excited to just share what I’ve been working on in hopes to not alienate my fans but encourage them to step into new spaces and embrace change. But yes, this is a full expression and it’s the many sides of Rochelle Jordan.

What’s it been like developing your upcoming album in the middle of a pandemic? Did you find that this made the creative process easier or more restricting?

Well, thankfully when the pandemic hit my album was 90% done. We just had a few songs to tighten up. But, of course, the creative process of what was left, and just generally being an artist trying to express myself, was hard. It was and has been much more restricting. I spent a good amount of time feeling tortured because I had many moments of feeling stuck and in limbo. I had to remind myself to have mercy on myself, that it was okay to not be okay, that I was human and that it was okay to rest in this moment of so much uncertainty. I had so many artist friends going through the same struggle so it helped to know it wasn’t just me but yeah, it’s been pretty crazy.

What have been the main inspirations for your new album?

I would say freedom. Feeling free enough with myself to create whatever I want, and imagination, thinking outside of the box and letting go of others’ expectations of me. Most of all I just wanted to make people dance, to lift up and inspire people, especially in a time like now.

What are your long-term ambitions for yourself and your music. Do you have any milestones that you hope to reach?

I don’t like to speak to things before they happen unless I’m writing them down in my manifestation journal but all I’ll say is: I just want all the good things for my music and life. All the wins that are in front of me, I’m going to embrace them all like I never have before.

Rochelle Jordan’s new album ‘Play With The Changes‘ is out now.