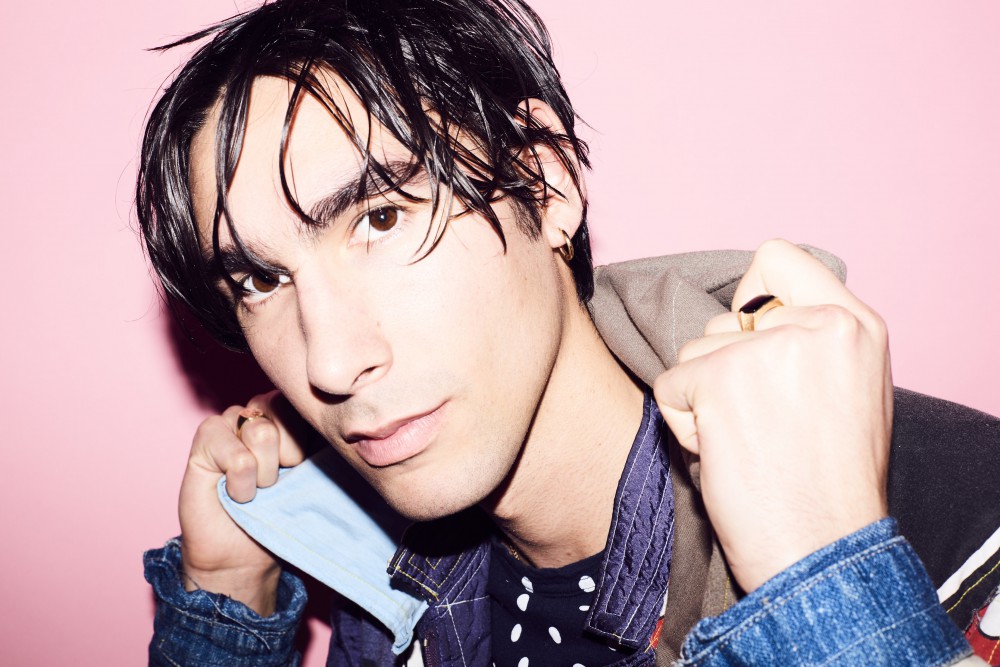 We’ve given each other an appointment in an Upper Street café in Islington. London’s looking its best – drenched in sun, gearing up for the weekend. Oscar Scheller can be seen striding up the street from a distance – hard to miss, unmistakable even, with tall, lanky, dark with model looks. He’s sadly unaccompanied (his side-kick Jasper has garnered himself amounts of press for his teddy bear looks and intoxicatingly cute fluff), but then he’s been on the run between promo and album launch. Cut & Paste, Oscar’s debut album, is a rife mix of anthems, ballads, lyrical explorations of the contemporary. A renaissance man of sorts, Oscar started out as a bedroom producer, but a background of fronting indie bands and flitting between Art College conundrums and classical careers in Opera has resulted in the 20 something talent signing off a spectacular 10 track record. Basking in the sun, he unbundles some nuggets from his backpack for Schön! – polaroids of his parents, a small selection of records, his casio mini keyboard – components of a post-postmodern collage, that tell stories woven into the intricate fabric of Cut & Paste.

Good! It’s all been really good; a lot of press promo. I’ve just been doing phone interviews on buses, wherever I can basically. I did one off the M25, and did one in someone’s office building, hanging out of the window. I was doing one the other day and some guy tried to sell me weed when I was on the phone to a French journalist.

I definitely have big ideas, but not necessarily for this album. Realistically, the first album is the first thing people hear and kind of connect with. It might take a bit of time, but I am not trying to be here and gone tomorrow. I want a real career, a real discography.

This is your first release with Wichita…

It is the first album, but the first release was the single. The first was Daffodil Days, which was a year ago.

What was the difference really between pre-signed and after?

Just having to do a lot less, because before I was booking my own shows, I was trying to find band members who kept running away or joining other bands, you know what it’s like. And it was just nice to have someone else’s support and someone’s belief in a way, someone that is fully behind you and that isn’t your Mum! (laughs)

You launched producing all of your own sound, giving off a real DIY vibe. Did you take this album into the studio?

There wasn’t much need for a studio at first, I gave them my demos and they were like “cool, we can just mix these”. It’s a bedroom affair and it kind of shouldn’t be taken too far away from that. They were really considerate about that; it’s a cool label. Two of them used to work in creation so they kind of understand artistic integrity.

You’re a classically trained musician – what exactly did your parents put you through?

What was I doing? Well, I started playing piano at 6. I can’t read music or write music, but I did everything by hearing and by sight. I learned Suzuki method – it’s encouraging instinctive ways of learning and playing music.

I started singing, had singing lessons when I was 8 when I realised that I wanted to sing. And that was when I started doing classical grades, associated board and the Guildford school of music, so I did up to grade 7. I failed my grade 5 theory, disaster. I did as many as I could!

I absolutely hated grades and theory.

I sat the exam three times! In some horrible building in King’s Cross. Me and theory and logic, we just don’t get on. We never will, I am not good at maths, not good at numbers, or dates, or times.

I did the classical stuff for as long as I could, then my voice broke. I got really upset about that, and then I started being in bands, but I had no creative input in those bands, I was just the singer. Then I realised that was not my bag, and I wanted to do more and could do more so I was like “fuck you, I’m going to go do my thing”. Here I am!

How influential do you think the classical training was?

I have a weird mix of classical training, coupled with art school and philosophy. It all coincides – the same theories and appropriation, from sampling to music making. So like classical and contemporary together, making a mess. There is no other sound like me right now and it makes it really hard finding a match when it comes to support acts. You can’t just throw me in with a guitar or pop band; it’s kind of like a middle ground and it makes it kind of hard to navigate. But it’s good. 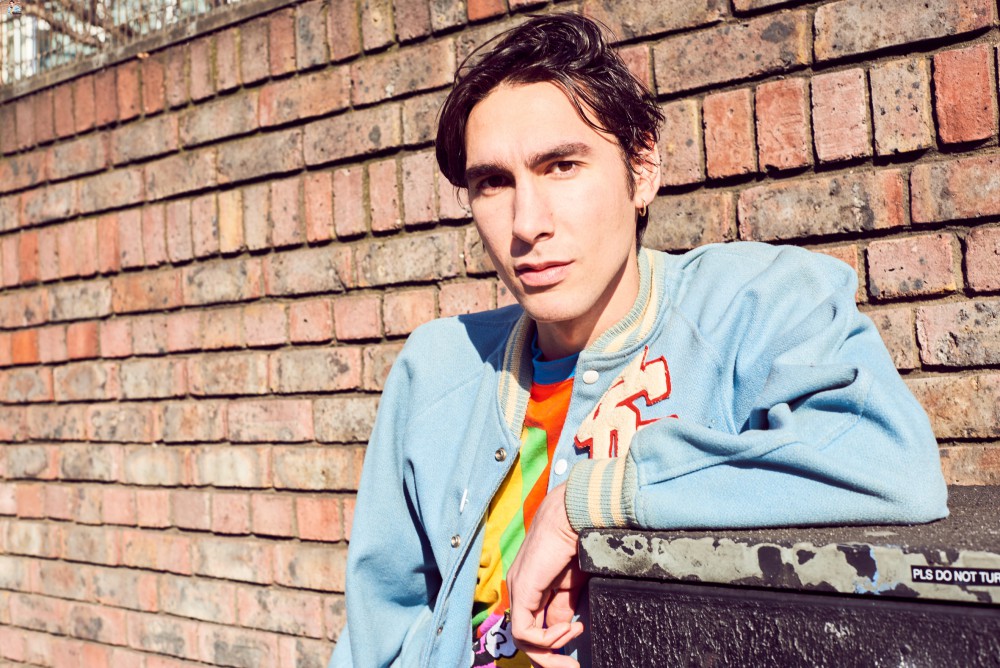 Your parents also have a classical, musical background?

My parents were both musicians but Mum was never really trained. She always listened to Blondie and has a really good ear for melody. My dad was a bit more trained, he was a jazz drummer and I think he went to Royal College, but he was also a fine artist as well, so he had a bit of the renaissance thing going on. They were both in a band called The Regents before I was born in the ‘80s.

And they sent you to a hippie school?

Yeah! A Montessori school. The most hippie thing we did was like we learned how to fold clothes and do washing up, we all had different roles and it was very democratic. Which was really good in some ways, it definitely nurtured the creative spirit but it really didn’t help me when it comes to being a normal human being like existing in a system that’s made of dots and dashes, the government system of education, which is all bullshit.

Then I went to art school, St Martins – it was a smack in the face of conceptual art and I never really came across it. There were some elements I really like, of course, but for the most part, I thought it was a lot of bullocks! Art is very visual and based on visual judgment and I was kind of lying. I miraculously graduated!

How many years ago was that?

Three years ago, been active since then… I was writing a lot of the songs for the album during the time at St Martins, and maybe another song before that when I was really young, 15!

The only comments I get about my voice are ones that I don’t agree with. Everyone says that I sound really like deadpan, somber, sad, Morrissey-esque, miserable, depressing, but none of these things describe any part of me. I get disgruntled because really like they think just because it’s a low voice that people think that it’s sad.

When I’m singing, I’m feeling every emotion I can, so when someone goes and calls it deadpan I’m… am I not doing something right here? (laughs) It’s such an insult for me. Maybe I’m just really sensitive.

I think it’s good because it means that I feel a lot more all the time, maybe too much sometimes. The good thing is that you feel things and you can kind of like express them, in which ever way you feel like you see fit. The bad thing is that things affect you more than they would other people, or you know you’re just very sensitive. Which obviously means that you can either be very happy or very sad. So it’s quite extreme! I’m going to go with good though, overall.

Does making music have a cathartic element to it?

When I really started writing music, around the age of 13-14, it was because it was kind of a way that I could let out whatever grief that was going through, and it was very like clear relationship between my suffering or like my experience or whatever, and then the music. As time has gone on it’s become a little less angsty but it’s kind of got the same resonance I guess.

But why would you write about something that makes you happy? Cause it never sounds good does it? Let’s be honest! What happy songs do people like?

He probably was on drugs when he wrote that. I don’t know..

Not bad, considering it went on to become the biggest selling single in history, right?

My mum had it as a ringtone, drove me nuts.

Touring! I go to America next week, with Bloc Party, I am supporting them, which is cool! Then I come back and do the festivals in the summer. Glastonbury, Field Day in London, Latitude, Secret Garden Party and also other European festivals like Rockorama, Rockville, way out west. Then in October is the UK tour, November is the European tour, and I think December is the American Tour! And then January and February I am going to record album two if I can. And then carry on touring!! Tour life!

This isn’t your first tour…

I have toured the states three times – it’s my favourite place. I would like to live in New York. If that time ever comes, that’s kind of where you might find me! Hackney to Harlem (laughs)

Survival tips for a global tour?

I do Italian opera warm ups before every gig! Half an hour of it; it’s also my meditation. I’ve had to  do those in really weird places: hotel rooms, taxis, on the street, in an alleyway… showers! Multiple showers, multiple bathrooms…