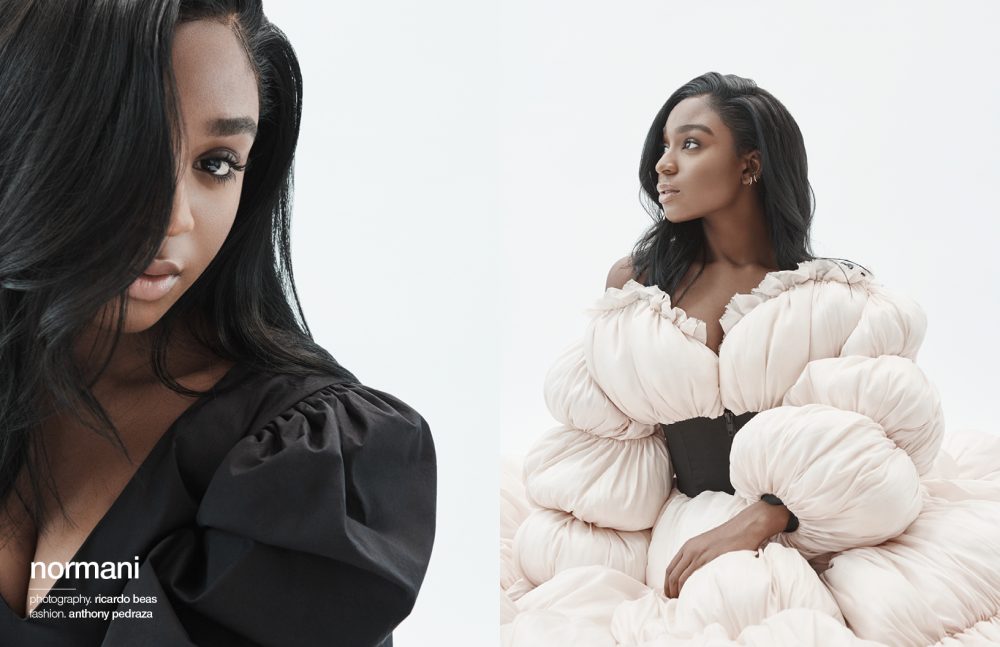 Atlanta-born Normani is electrifying the R&B world with her compelling vocal talent. Raised in New Orleans, the artist fell for the magic of the city’s blues and jazz scene inspiring an early thirst for music. The 22-year-old is impressively driven. She started singing and dancing at three, was a competitive gymnast, and recorded her first song aged 13. Making her name as a member of the platinum-selling girl group Fifth Harmony, Normani launched as a solo performer following the band’s hiatus. Her debut single, Love Lies, featuring Khalid, made history establishing Normani as the first-ever girl group member to score so high in their first week on the US Billboard Hot 100. She is currently working on her first solo album, is the Global Ambassador for the American Cancer Society — a cause close to Normani’s heart — and is the Ambassador for The Cybersmile Foundation after being the victim of racial abuse online. Normani is open about her experiences and remains grounded and humble in the midst of fame. The young star gets candid with Schön! on pursuing her dreams, her personal struggles and the importance of finding the truth at the very heart of her music.

You have been singing and dancing since you were three, and recorded your first song aged 13 — what effect did developing your craft so young have on you?

I have been preparing for this moment since an early age not even recognizing what God had in store. I was a competitive gymnast and dancer growing up. I also participated in pageantry which forced me out of my shy shell. I really believe being active in many different things all at once taught me about discipline and work ethic. I always felt like the underdog which gave me fuel to work harder even when I felt that I was already working my hardest. My experiences groomed me for this moment.

Who do you credit your work ethic to?

Honestly, I pushed myself because I had to work harder than everyone else. I was always overlooked and felt like I had to prove to others that I deserve to be here. I am worthy. My parents taught me [that] believing in myself and giving my all is like believing that God doesn’t make mistakes.

What else did they teach you that made you the woman you are today?

My parents are my backbone. I never had to convince them of my dreams and gifts. They believe in me even in the cloudiest times. I vividly remember being taught what it meant to be independent and always making my dreams priority. There was never a time they didn’t encourage me to be relentless in my pursuit. I grew up watching my father work endless hours to make sure that our family was taken care of and always protected. My mother is the fighter and cancer survivor who never quit on life and refused to allow her illness to prevent her from being here to raise me. She is my rock that keeps me grounded and laser-focused even when I feel that I don’t have the strength to be. I’m the woman that I am because of who they are.

Do you remember what inspired you to start singing and dancing aged three?

Growing up in the rich tradition of New Orleans, I always loved the sound of music and dance. It was easy to fall in love with the culture, from soulful blues and jazz to bouncing trumpets and horns. Living in that city was an inspiration in itself.

What book, movie or performance has had the biggest impact on you?

Who are your female icons?

How does the transition from girl group to going solo feel?

[The] adjustment was a milestone considering being in the group was all I had ever known. I learned about navigating through life and having to be an adult at the age of 15. I never in a million years thought this would’ve been my reality so young. I have learned to understand people much better and, despite the circumstances, find the strength to remain myself. I’m stronger and better prepared because of the group. I am also very thankful for this opportunity. I’m discovering new things about myself every day. I have had nothing but amazing support from my fans and I am ready to give them something they can jam to. I’m really excited to reintroduce myself to the world. Perhaps all of me for the very first time.

What is your usual songwriting process?

The most important to keep in mind is honesty. I remember what records made me fall deeply in love with music and what they all have in common is truth. My only mission walking into every session is trusting myself enough to only allow the truth to flow out.

Do you get nervous performing live or have any pre-show rituals?

I absolutely still get butterflies before performing. I have always been one to overthink things and at times put more pressure on myself than necessary. I completely transform once the music starts. I can only explain this as an out-of-body experience. I watch myself online not being able to believe that I’m that person performing. I pray along with my family and team before anything we do. God gives me courage and calms my spirit. I’m never on stage alone so I remember my purpose and who I’m doing it for. I never fail to honour him.

How would you describe your stage and personal style?

I’m a chameleon when it comes to fashion. I have had such an evolution. I have definitely had moments that I’m not the proudest of but I truly feel that fashion allows me the freedom to physically wear my emotions. I pray to make my mark in being bold, unconventional and free in my choices.

What is the best piece of advice you’ve been given?

Trusting my inner self and allowing myself time. I was told by another artist to never allow anyone to rush my process. Making sure that when it gets noisy to silence everyone and listen to my own voice. I understand more than anyone what this album is meant to say and feel like.

In the entertainment industry, there has been a lot of conversation about a lack of diversity, the gender pay gap, inequality in leadership roles, and a general abuse of power and sexual misconduct. To what extent, if any, have you found this an issue for yourself?

As a young woman in a male-dominated industry, we are all affected by the lack of equality whether its financially, misconduct of those in power, unfair bias and stereotypes or just not given the respect we deserve. It is our responsibility to stand up and speak out for fairness.

These issues are being exposed in the acting world, but the music world isn’t as vocal. Are these conversations happening around you in the music industry? Are you hopeful for progress?

I am very hopeful that we can make a positive impact and bring about meaningful change in our society and within the music industry. As more people become educated and vocal change is inevitable. We all must do our part and that includes becoming leaders in our communities, elected offices and stakeholders with seats at the table. 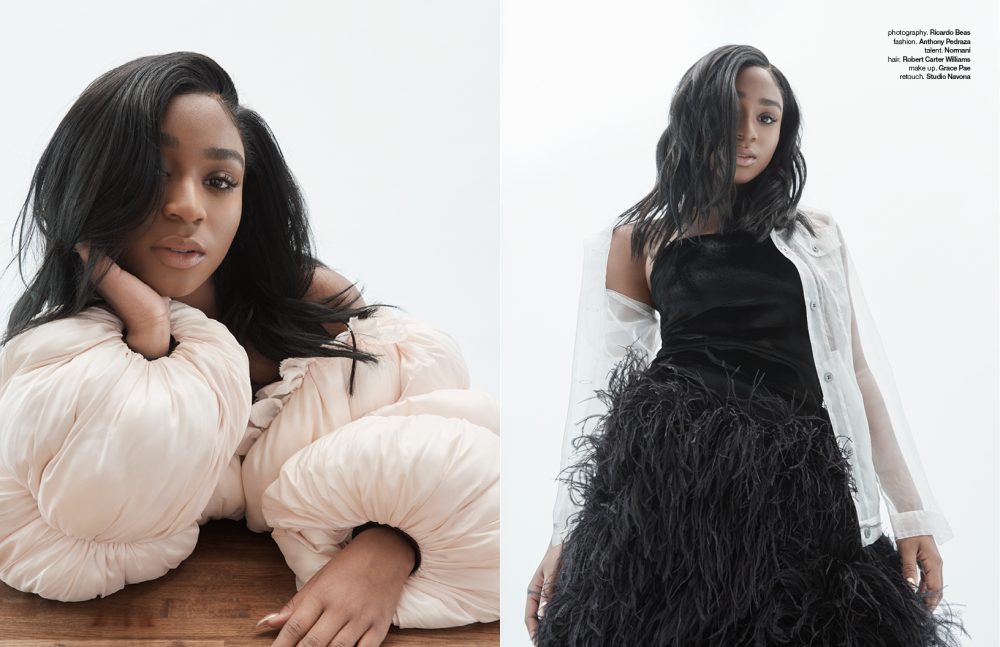 You support multiple charitable campaigns, where does that philanthropic drive come from?

My motivation to support [comes] from personal experience and fully understanding my purpose. I was cyberbullied two years ago and I remember this being one of the most disappointing times of my life. It saddens me that this act has become normalized with no repercussion. I focus on what I have control over which are my thoughts and the story I choose to tell despite what anyone has to say. I was obviously hurt by this situation because I’m a human being with feelings. I think people put celebrities on a pedestal and they forget that we feel too. It was a difficult experience but I grew stronger from it. I found the courage to speak out and have helped many by doing so. The healing process was a gradual one. I had an amazing support system in my friends and family that helped make dealing with this time a bit easier. I would encourage anyone experiencing the same to take a moment for yourself and allow yourself to feel, which is something that was necessary for me. I would take the time to learn amazing qualities about yourself. You’re not alone.

I’m also very passionate and honoured to be the Global Ambassador for the American Cancer Society. I love being able to share my story of my mother facing and overcoming breast cancer when I was five-years-old. This drove me to partner and be a strong advocate for those who are battling this illness along with their loved ones.

How effective do you find social media as a platform to engage debate and open conversations on important causes?

Social media is an excellent platform to discuss and enlighten others on important issues. However, when used improperly it can be abusive and damaging as I personally experienced first-hand.

If you could pass one law as president what would it be?

I would definitely overhaul the immigration reform system. I would give families the opportunity to become American citizens where they are able to pay their fair share. Most people love their family and only want to provide a good life for their children just as we all do. This country is a nation of immigrants. We have to find an honourable and dignified path to citizenship.

Lastly, what should fans expect from Normani in 2018?

I am currently focused on my debut album. I have spent the majority of my time in the studio writing and recording. I thank my fans for being incredibly devoted and encouraging throughout this process. They have been patient but the wait will be worth every second. I’m so excited for myself but especially them.

Normani is currently recording her debut solo album in New Orleans. The still-untitled album is expected to drop later in 2018 or early 2019.