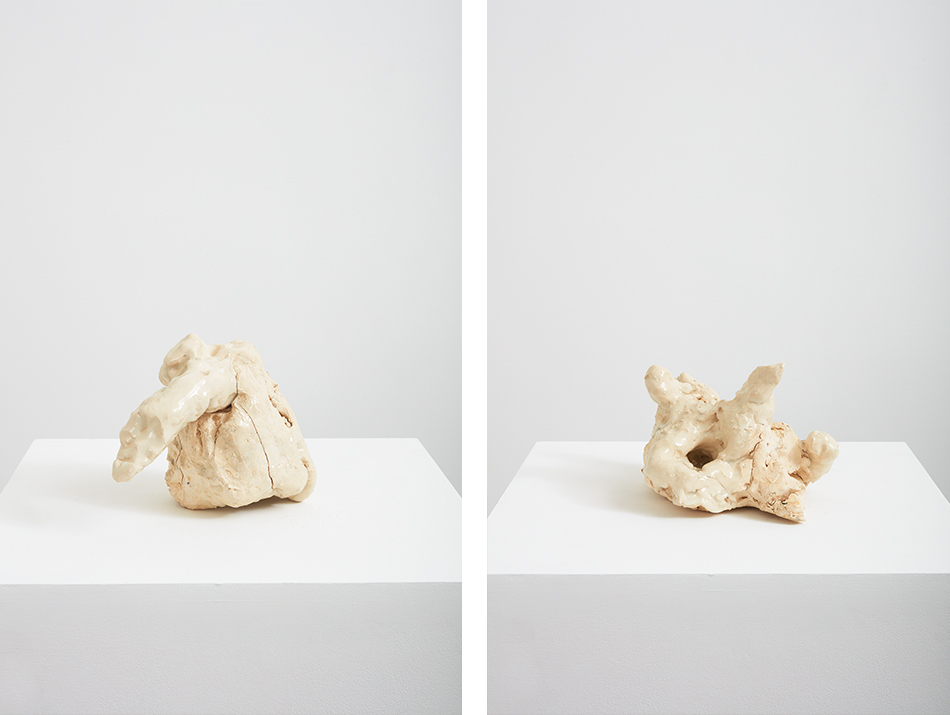 They’ve reinvented the dynamics of artist collectives, have been accused of being art terrorists, have dissected corporeal connections between artists and art, and are now taking on the format of sculpture for the Massimo de Carlo residency, deceptively titled Prosopopoeia. Deceptively, as it’s less about speech as it is concerned with action: the very interaction, in fact, that runs lines between subjects and matter. Schön! sits down with the four artists of the Austrian collective:meet Gelitin. The foursome conducts deconstructive performances, thrashes out the superficiality of art and destroys the monogamous relation of artist with the artwork. They’ve shown at the Hayward, held performances in Paris’ Centre Pompidou, and represented Austria at the 49th Biennale of Venice.

“The group dynamic works,” is the opening introduction to the Gelitin method. A mantra closely followed by the affirmation: “It is better to work in a group.” The discourse is one of comprise – giving in is the most productive of tools when it comes to working in a collective. “It’s more doing than talking. Watching each other. One guy might think something is a mistake while somebody else realises it is going in an unexpected and interesting direction,” explains Florian Reiter. “Sometimes I think I have no clue at all and no ideas and it doesn’t matter anyway. We all live together and someone says something and then things come up that you wouldn’t have thought about.” 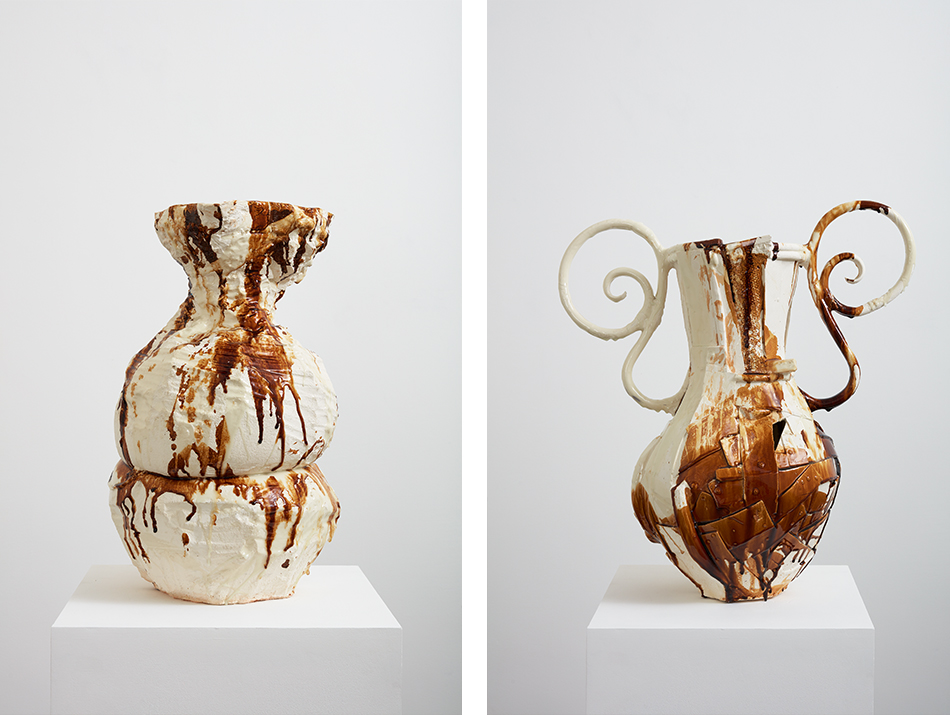 Countless international happenings of tongue-in-cheek performances since the ‘90s have garnered Gelitin the reputation of shock art – a label they refute. “We’re not against anything. We can only do it the way we do it. For us it’s what comes out of us and it’s well thought [out],” explains Wolfgang Gantner. “Of course there are other artists and we look at their work but we are four artists and that’s enough.” “For me it’s Gelitin art that relates to some artists and to the future. We are just continuing the path of the art. We try our best and we try not to make mistakes and usually we try not to show them but sometimes we do.”

For Prosopopeia, Gelitin took on the prerequisite of a univocal, unilateral persona that seems to characterize a lot of contemporary works – an imperative that demands cohesion, thorough connectivity and relations between the various elements of a piece. In true Gelitin form, Prosopopeia is brilliantly schizophrenic, unstabilisingly chaotic, and perilously engaging. A first stab at ceramics, the show opens on a series of glaze stained pots and mysteriously phallic sculptures. “This is a great traditional show actually. It uses a lot of different mediums like ceramics and plaster and drawings,” explains Wolfgang. “It’s like a showcase of what we do.” In the show, action takes centre-stage, retracing the link between the artists’ bodies and the very matter of art. The climax of the show is the video installation in the gallery basement, a witty and wonderfully in-you-face plat de resistance, where clay purveys pleasure, moulds itself to the shape of the body (specific parts – we’ll let you imagine), and positions corporeal agency at the heart of the work. “When it comes to matter you have a chance to work with material as an artist. For example this is the first ceramic works [we’ve shown],” states Wolfgang. “There are a million ways to work with ceramics and we looked at the manufacturer and how Gelitin would work with it.” 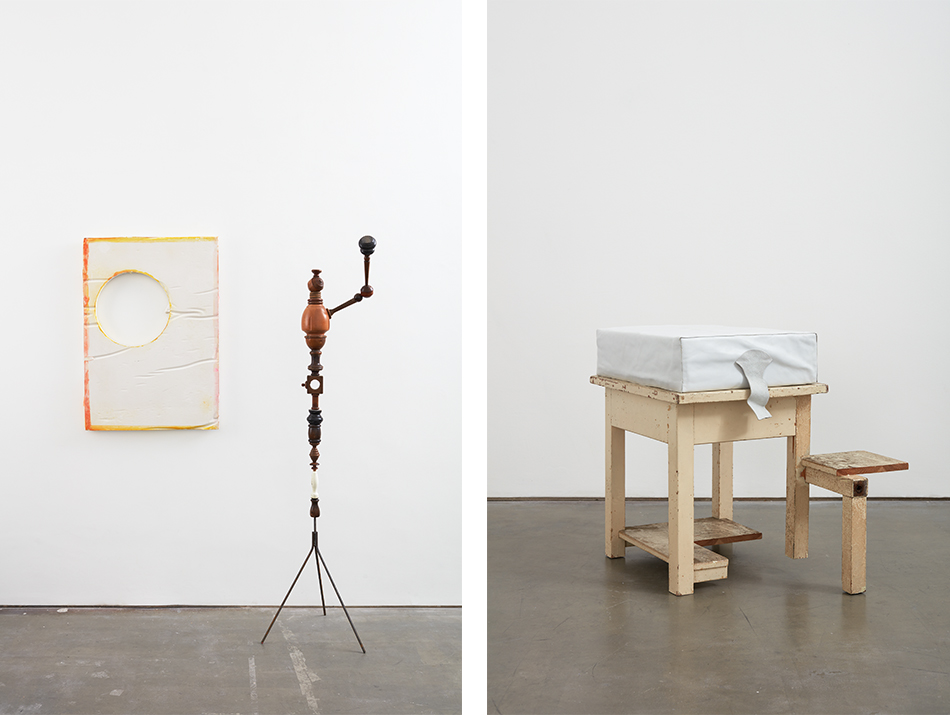 “You have to follow the logic of the material. It’s very difficult to work against the logic of the material,” Ali explains academically. “You see this piece of clay and what do you do with it? It’s warm, it’s nice, it’s greasy…” Placing itself in alignment with previous performances of the collective, Prosopopeia takes on filthy fun, portrays bodily performance, dissects the carnal interaction of pleasure and pain. Above all, Gelitin break down the boundaries between bodies and artwork, a dichotomous imperative that seems to have wangled its way into many a work. “If you see someone fucking clay you think, ‘I can do that too’,” Ali explains. “This show opens up your possibilities. Instead of making art with some super fancy material and thinking I can’t do it because I don’t have enough resources, everybody has the resources to fuck clay. You don’t need much.”

An easy accusation to make, if you work your way through the mountainous pieces and ominous volumes of marble (a visit to the facilities at Massimo de Carlo is called for), is the show is a phallocentric depiction of male pleasure. A statement the collective clearly refutes. “It’s the tool that you have with you,” they tell us. “You could also use your arse, too. Everybody has an arse. You can use your nose. It’s just incidental.”

A cunning reproduction of a cultural multiple personality disorder, Prosopopeia takes root in comfortable domesticity, in safely identifiable situations of daily life, and destabilizes, reconfigures the real to reveal the filth, the unstable, the multiplicity implied in chaos. The concluding remark to a complex layering of social and more corporeal, biological references? It’s quite straightforward, really: “We’re just four boys,” they proudly affirm. Well, just boys, and their toys…

Prosopopeia is on at Massimo de Carlo until 10th of October 2015.