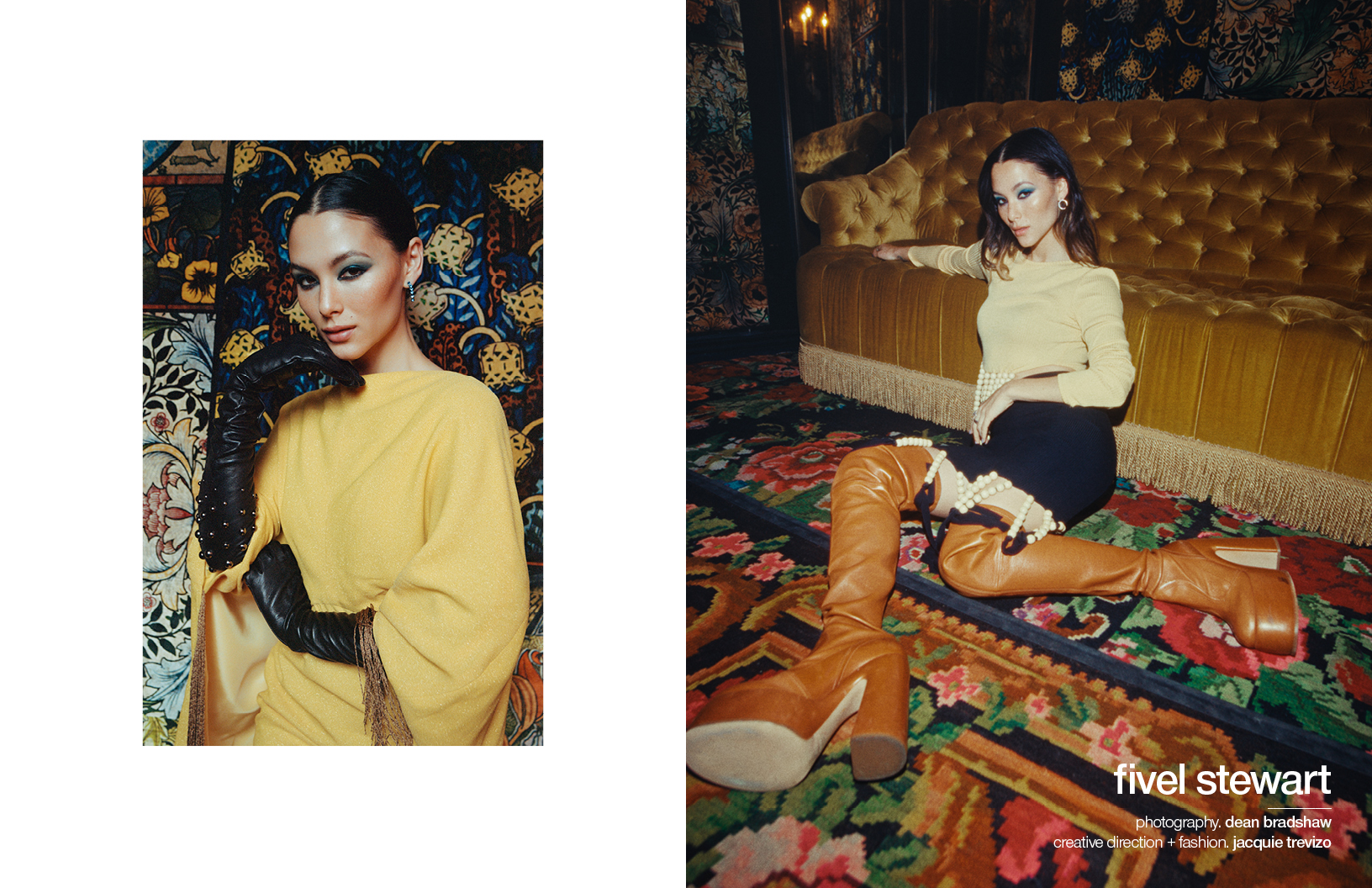 Fivel Stewart tells us, “I still think to myself, am I reaching for stars that don’t exist?” And while fear is woven into that statement, there is also a comforting truth to those words. When we look up at the stars, we are not seeing them in the way they really exist at that moment. Stars from far away are a reflection of the past, and don’t actually appear the same up close – sometimes they have already faded away, yet other times they are brighter than imaginable. Once stars are close enough to wink at you and shine a warm amber glow on your face, dreams often change with this new perception.

However, at that point, every glittering light can fall to your reaching fingertips, so there is consolation in the idea that ambition has a strong gravitational pull and is never unfruitful. Stewart has been ambitious from a young age; She performed stunt work with her dad and was inducted into the Black Belt Junior Hall of Fame before the age of 10, excelled in competitive dance, and performed in a successful band alongside her brother, Booboo Stewart. She currently orbits around the world of acting, and in many cases, has received more than she reached for. One of her first major roles was as Izzie Taylor in Atypical, a character whose queer relationship with Casey Gardner [Brigette Lundy-Paine] continues to have an astronomical impact on viewers even after the show’s end.

Stewart’s most recent role is as Hannah Copeland in Netflix’s spy thriller, The Recruit, released on December 16, 2022. Hannah is roommate and ex-girlfriend to Owen [Noah Centineo], CIA lawyer. Like Stewart, she is highly ambitious as she met Owen in law school and is just starting out her career as a first-year lawyer at a private firm. Hannah reached for the stars, but when she got there, everything was dim. She is now unsure whether it was her reaching or if her D.C. lobbyist parents had been pulling her arm up, extending toward their own dreams. In our interview with Stewart, she talks about playing Hannah, recounts childhood memories, and shares what she is reaching for.

You did such a great job in The Recruit, I genuinely enjoyed watching it so much! To start the interview in the holiday spirit, what do you imagine would be one thing on Hannah’s wish list? I was staring at her cute clementine mug the whole season!

Ooooh I love this question! I think we get a glimpse of Hannah’s love for nice, beautiful robes. So, maybe another one? Or one of her friends surprises her by taking her to a tattoo shop! 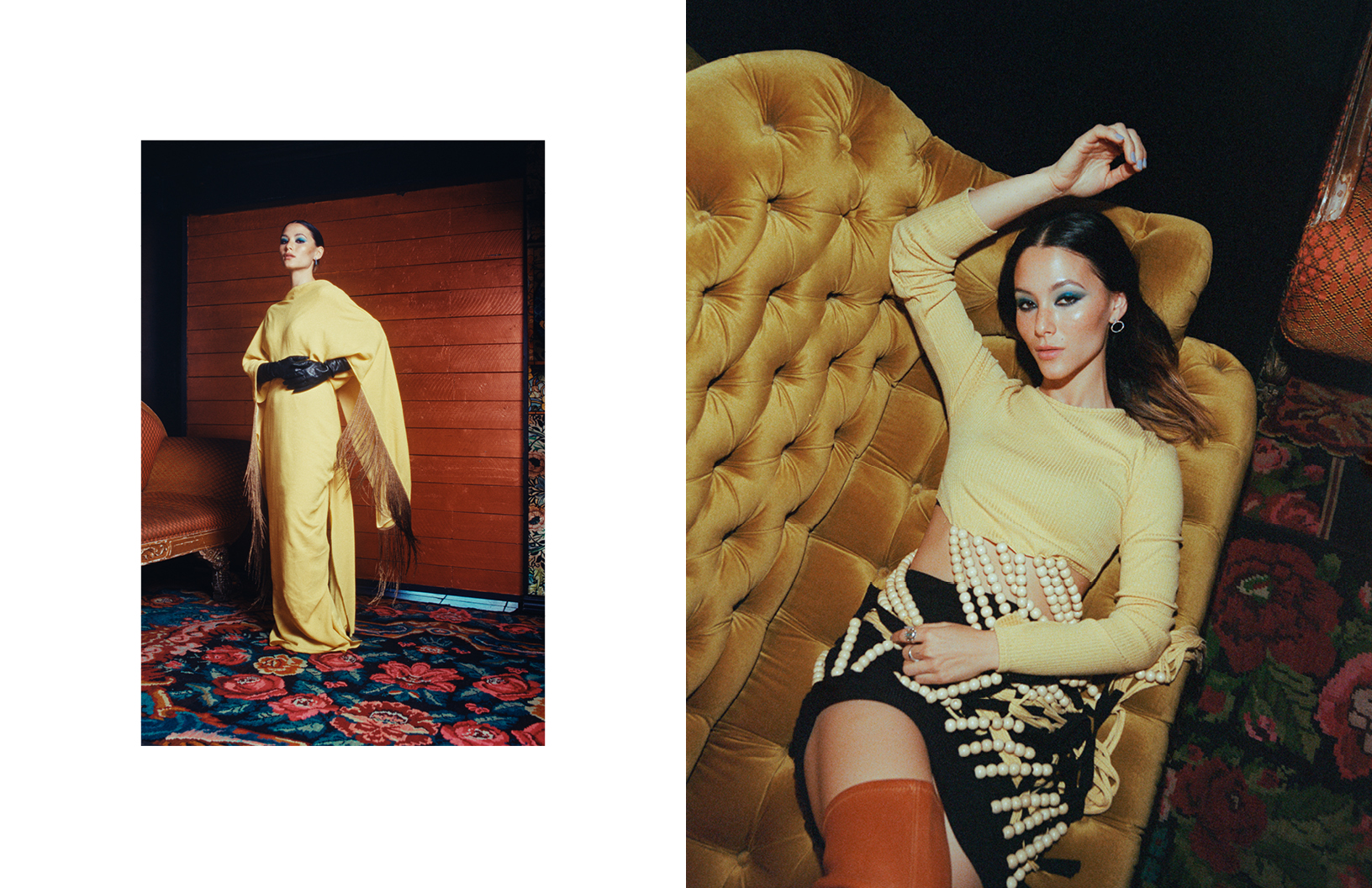 I really also wanted to take some ideas from the show and have you relate them to yourself. At one point, Hannah tells Owen that she worries that all the good times are behind her. So, on that theme, if you could bottle a few moments from the past, what are some memories you really want to hold on to?

Definitely the times I’ve worked for my dad as a stunt performer. There was a scene I had to do where someone was pushing my head into a bathtub, trying to drown me. My dad was the stunt coordinator of the film. He was like, ‘are you sure you’re good? You’re gonna have to stay under for a hot second.’ I was positive I was going to be fine. The first take comes around, and I really have a panic attack in the middle of the scene. I immediately turned to my dad, cried, and then fell into his arms. I knew he had me. And I knew I’d be safe. The second take came around, and we nailed it. I think that memory will always stay with me.

Another one is…my younger sister is high functioning autistic. She’s always dreamt of being a singer or an actress. She is the kindest person in the world. She just landed a role in her high school play, and I don’t think I’ve ever felt so proud of anything in my entire life! It’s tough with autism because you don’t know what is actually possible. And there she was. On stage. Acting. In front of a crowd. Tears were pouring out of my eyes; I couldn’t control it. I felt like a proud mother haha!

My family. I think when we’re all getting along, and everyone is in a good place in life, hanging out with my family makes me appreciate the little things. 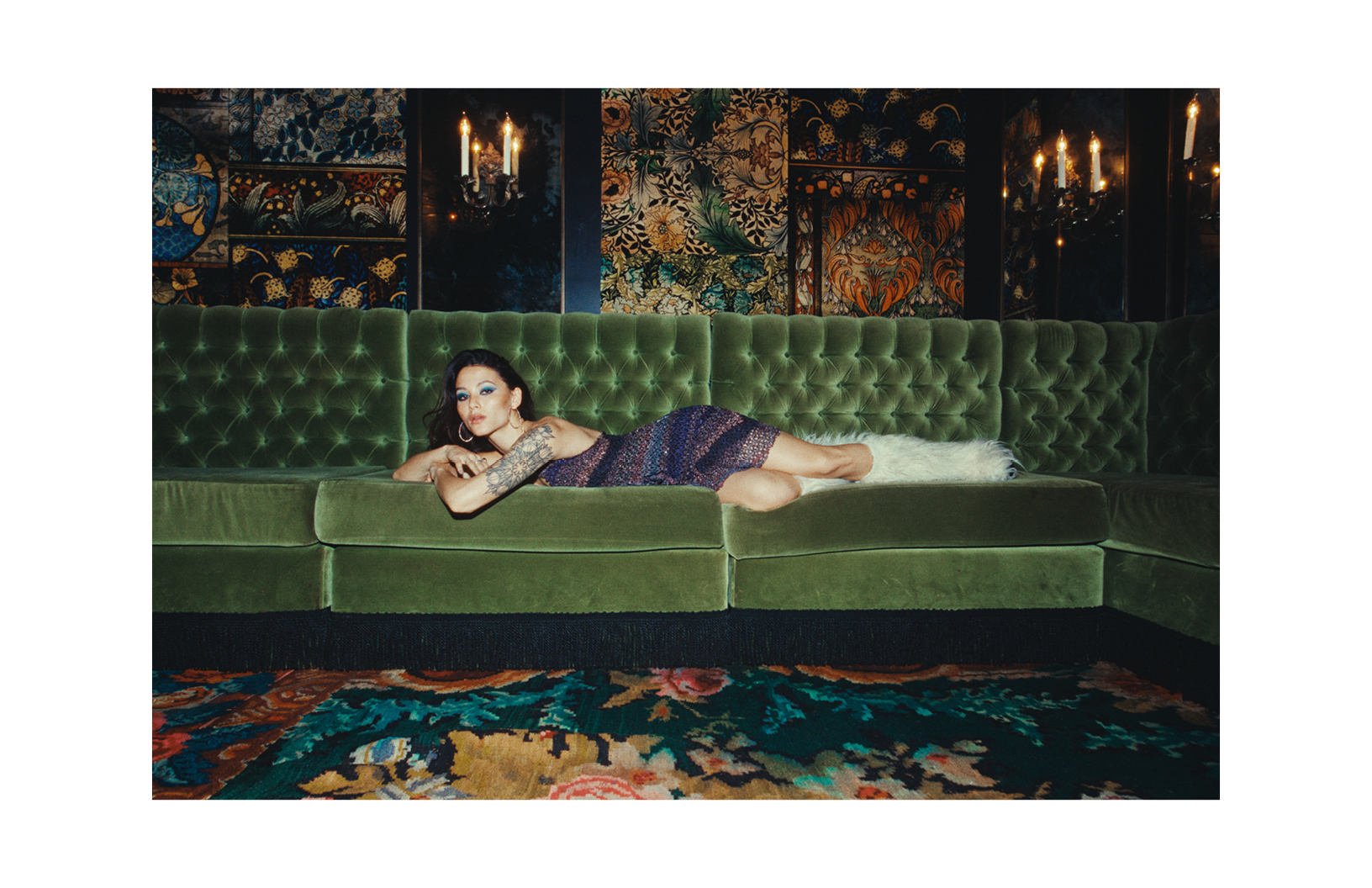 Something that really struck me was when Hannah told Owen, “I’m ambitious, you’re just afraid” and that idea runs through the episodes as we are finding where Hannah might really fall on the fine line between ambition and fear. Have you ever felt like your ambition bordered on fear?

Yes. I still think to myself, am I reaching for stars that don’t exist? Am I too confident in something that might not happen? I am fearful all the time. But I always come back to [the thought that] if I don’t believe in myself, then who will? I think there’s something beautiful in being both ambitious and fearful. Without fear, there isn’t growth. If you’re not scared of something, then how will you become stronger? [You become stronger] by being ambitious and tackling it.

One of your ambitions or passions is in dance. A lot of dancers who are also actors say that it’s such a great skill to have because there’s a sense of comfort with your body. On the flip side, is there any dancing habit that you had to unlearn when performing in the acting medium?

Hmm I actually don’t think I have!

Then is there any story that you’ve told through dance that you think would translate really well to film or TV?

Yes! I haven’t expressed them through TV or film, but my friends and I do get together and dance, film it, then put it on Instagram. It’s one of my favorite pastimes. I love movement, and I would absolutely love to join film and movement together.

Getting back to The Recruit, I know you and Noah Centineo had known each other for a while before filming. Did that help at all in portraying your dynamic?

Yes. I thought it was interesting having to let go of a certain relationship, and then having to build another one. Noah is awesome, it was so much fun.

It’s interesting that Hannah is a character who grew up with a complete lack of nurture and through her we are supposed to see how that manifests itself in adulthood. What were some of your thoughts or questions about Hannah as you were preparing to play her?

Definitely identifying what Hannah wants for her life – if she wants to follow her parents’ footsteps or guide her own life that looks nothing like what her parents want. And what Owen really means to her. 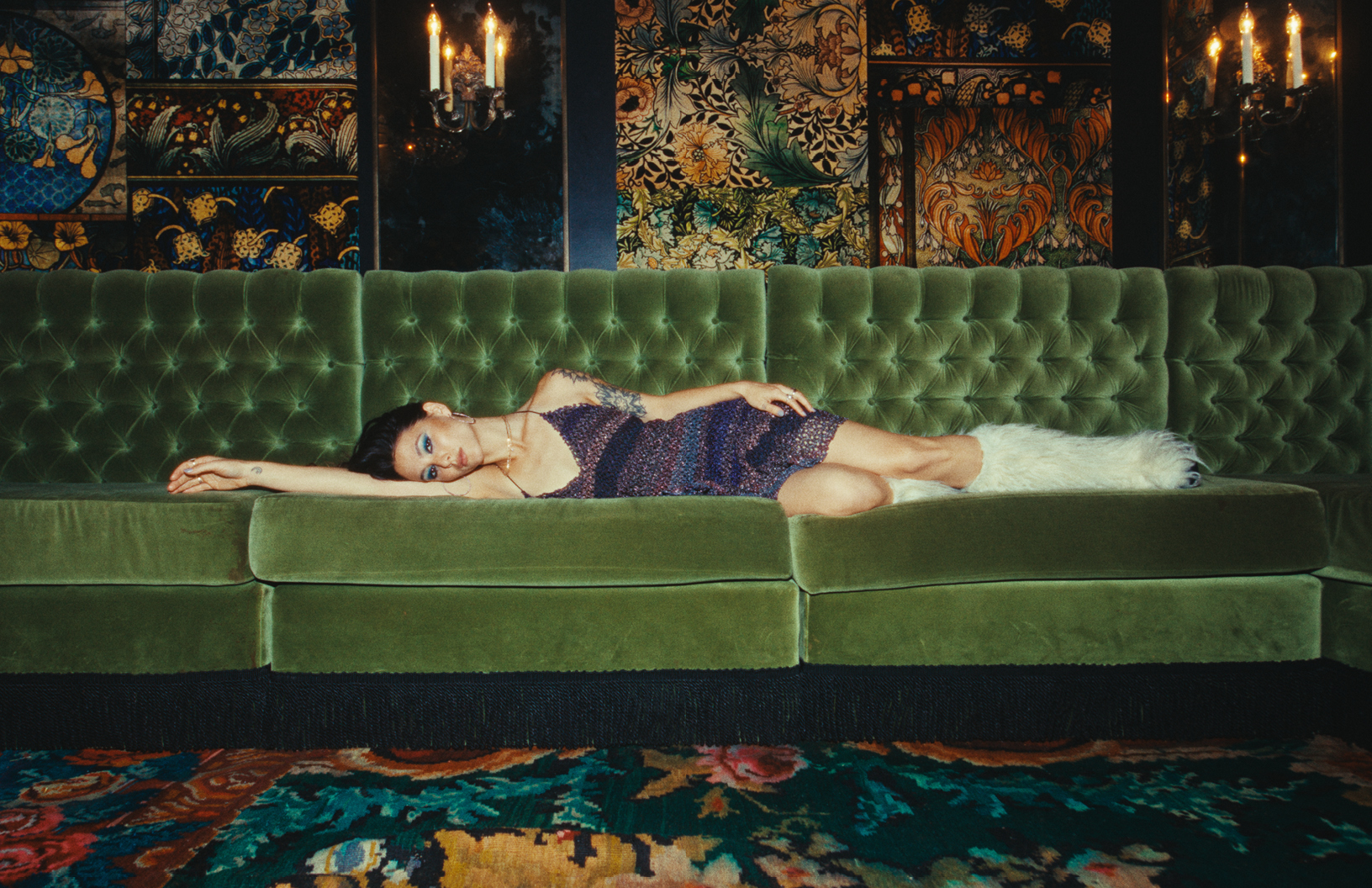 Then do you have a favorite on-set memory or a memory from spending time in Montreal?

I think my favorite memories in Montreal were when my boyfriend and I would host any holiday, or weekend gathering at our Montreal apartment. We would always go so full out on the food spread and try our hardest to make everyone feel like they were always welcome and at home. I think in a place like that, you need a solid community. Oh! We also threw a surprise gathering for our awesome makeup artist, Colleen [Quinton], at Noah’s place. That was pretty awesome too.

This is a bit of a hard question, but if you could do something now, knowing 100% that you would succeed, what would you do? It can be anything, personal or professional.

What I’m doing now, being an actress. I love being on set. I love bringing characters to life, I love the people I meet, and the friends I make. I love seeing projects come together. I love it all.

I am hoping to be a part of a project that I can sink my heart and soul into. I am hoping to have more happy memories than sad ones. I am hoping to feel continuously proud of myself through 2023. And I’m hoping everyone in my family stays healthy. 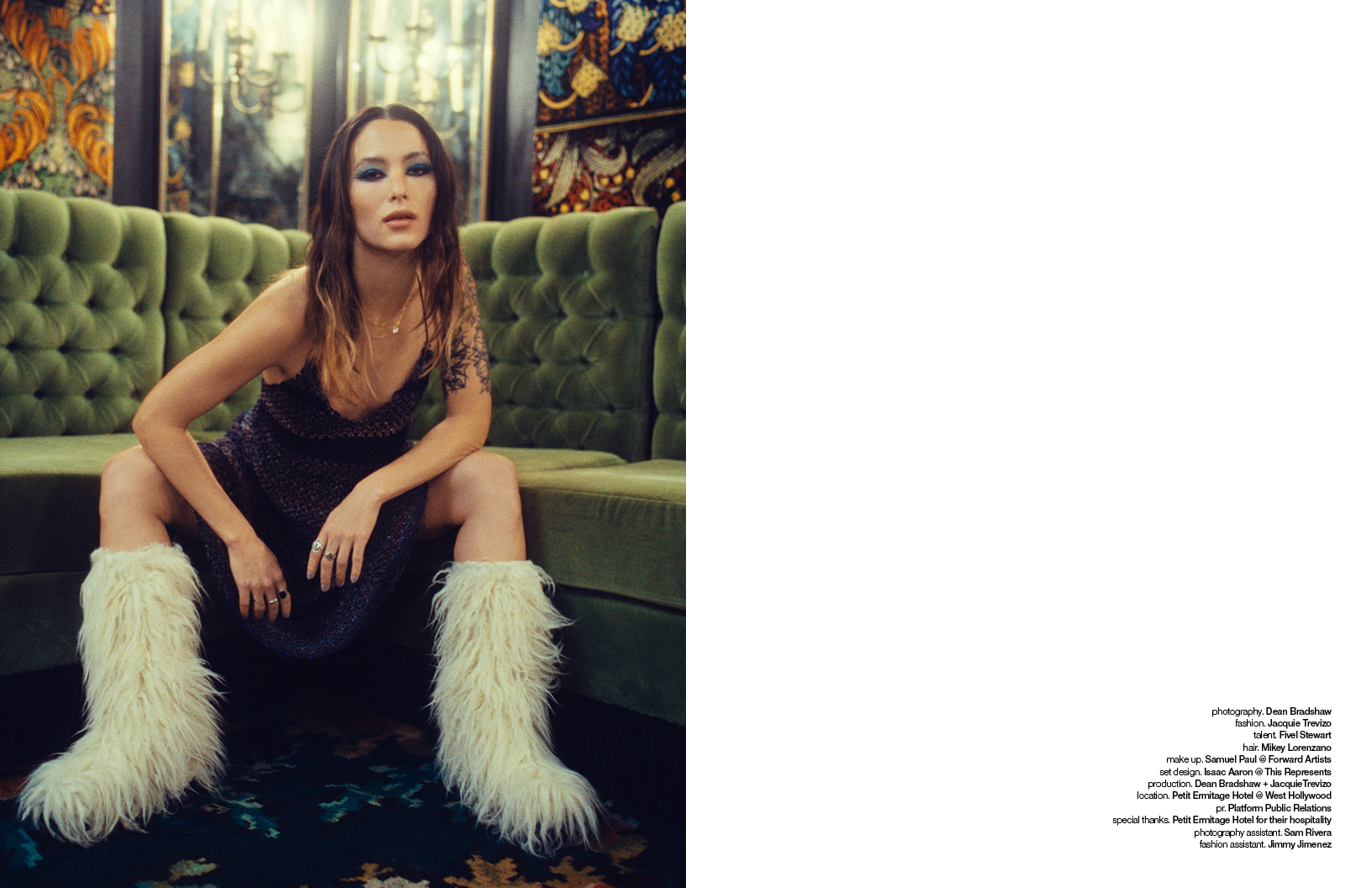 Stream Season 1 of The Recruit now on Netflix! Fivel Stewart will also be in ALERT on FOX, premiering on January 8, 2023.