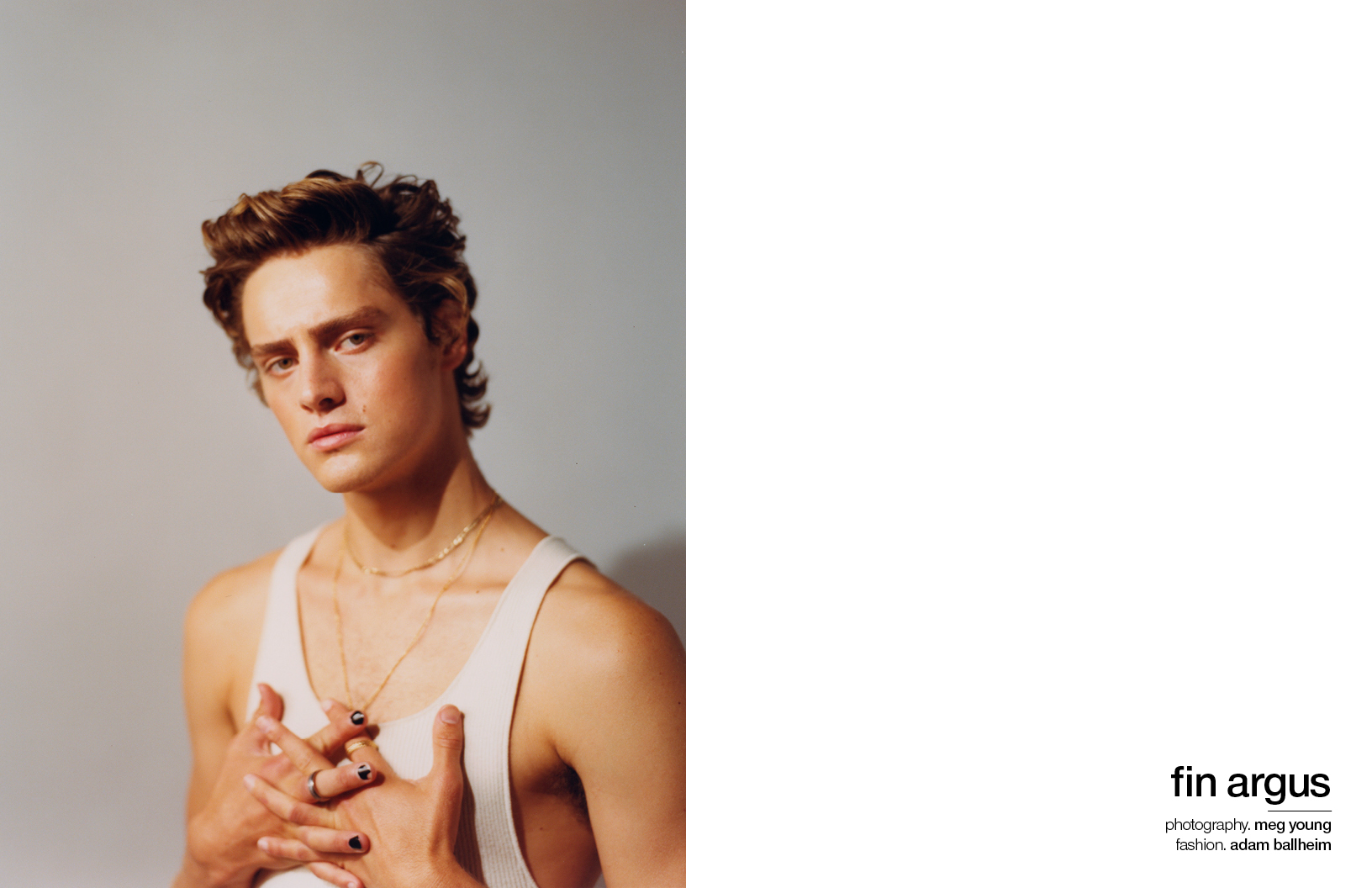 Most people will know Fin Argus as Steffan Argus from popular series The Commute, where the actor played the cordial, straightforward boy-next-door. But if you’ve been listening to Argus’s music from Lost at Sea, you would have known that he always had anguished, spirited emotions bubbling inside of him.

These emotions come to the fore with his new project: Justin Baldoni’s Clouds, a film based on the true story of Zach Sobiech’s tragic but inspiring fight with cancer. Argus rises to the occasion to deliver on his first film role and do Zach’s story justice. In countless scenes, Argus as Sobiech injects humour and comfort as a son, brother, boyfriend, and best friend, while still battling with his existential dread. Read on for what he told Schön! about the project: From getting the part to behind-the-scenes prep, and the film’s impact in his own life as well as in the context of 2020.

Some may know you better as Steffan Argus. Any reason behind your name change?

Fin is a nickname that for a long time only my dad and little sister called me. The name came to hold a special place in my heart and ultimately felt more like me. More and more friends started calling me “Fin” over the years. As I’ve been coming into myself and breaking down bounds that limit my self-expression, I’ve begun to realise that name resonates deeply with what I represent artistically. Embracing that name gives me a sense of freedom to be exactly who I want to be and know I am and continue to explore what feels like the truest sense of self.

You play so many different instruments: guitar, piano, french horn, banjo, ukelele, and more! What’s your go-to instrument and why?

My go-to instrument is the ukulele, originally because of the ease it takes to come up with unique new chords. I also appreciate the cheerful juxtaposition it adds to my otherwise, melancholy, angry, and/or brutally honest lyrics I’ve been leaning more into over the last many years. I still write songs on all of the instruments I play though; you’ve got to switch it up to keep the music flowing. 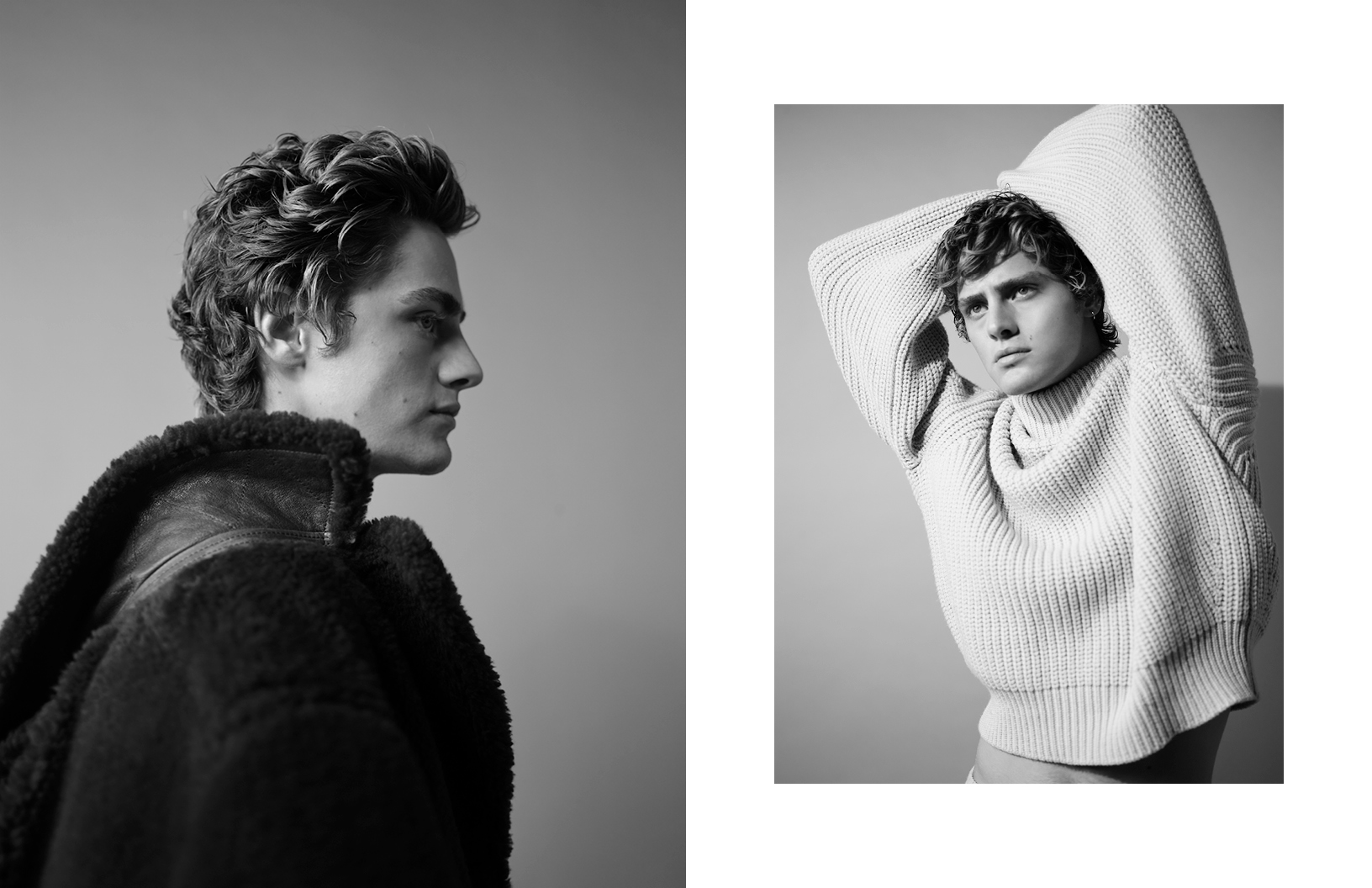 coat. Bally
opposite
jumper. COS

You seem to be very comfortable in the spotlight, starting to perform musical theatre from a young age. Yet your first EP, Lost at Sea, seems very introspective, where you sing a lot about escapism and seeking shelter. How do you understand this contradiction?

I would say I am the embodiment of that contradiction. I am, ironically, quite the introvert, but getting on stage, or in front of a camera seems to unlock something in me. Similar to the mental freedom going by “Fin” allows me, performing gives me a space to express feelings that otherwise I tend to bottle up. Art is my escape, and my old music was how I built the world I wanted to run away to. Now, with my new music, I am looking at this reality in the face and rewriting the script. I am trying to address my most confusing and difficult emotions head-on, and give them a new beautiful life, where I now choose the terms in which I relate to them.

Who are you hiding from when you’re singing “Please don’t find me” on “Lost”?

That song was written at a time where I felt it was almost impossible for me to be vulnerable, for fear of judgement. It was covertly addressed to my family and friends, as I self-isolated, in an attempt to create my own safe space that no one could touch. I have since found my safe space in the new music I’ve written and feel no need to hide behind metaphors anymore. Instead of running away, I am facing these thoughts and ideas head on to realign how I relate to them on my own terms.

How do music and acting inform each other for you?

They’ve been connected from the start, as my first interest was musical theatre. In a more personal sense, my original music helps my acting because it helps me connect to and confront my deeper emotions. I need to be able to access those when acting. Also, there are often times where I listen to a specific song over and over before filming a scene to help me tap into the headspace I need to be in. One song I had on repeat while filming Clouds was “Casimir Pulaski Day” by Sufjan Stevens. 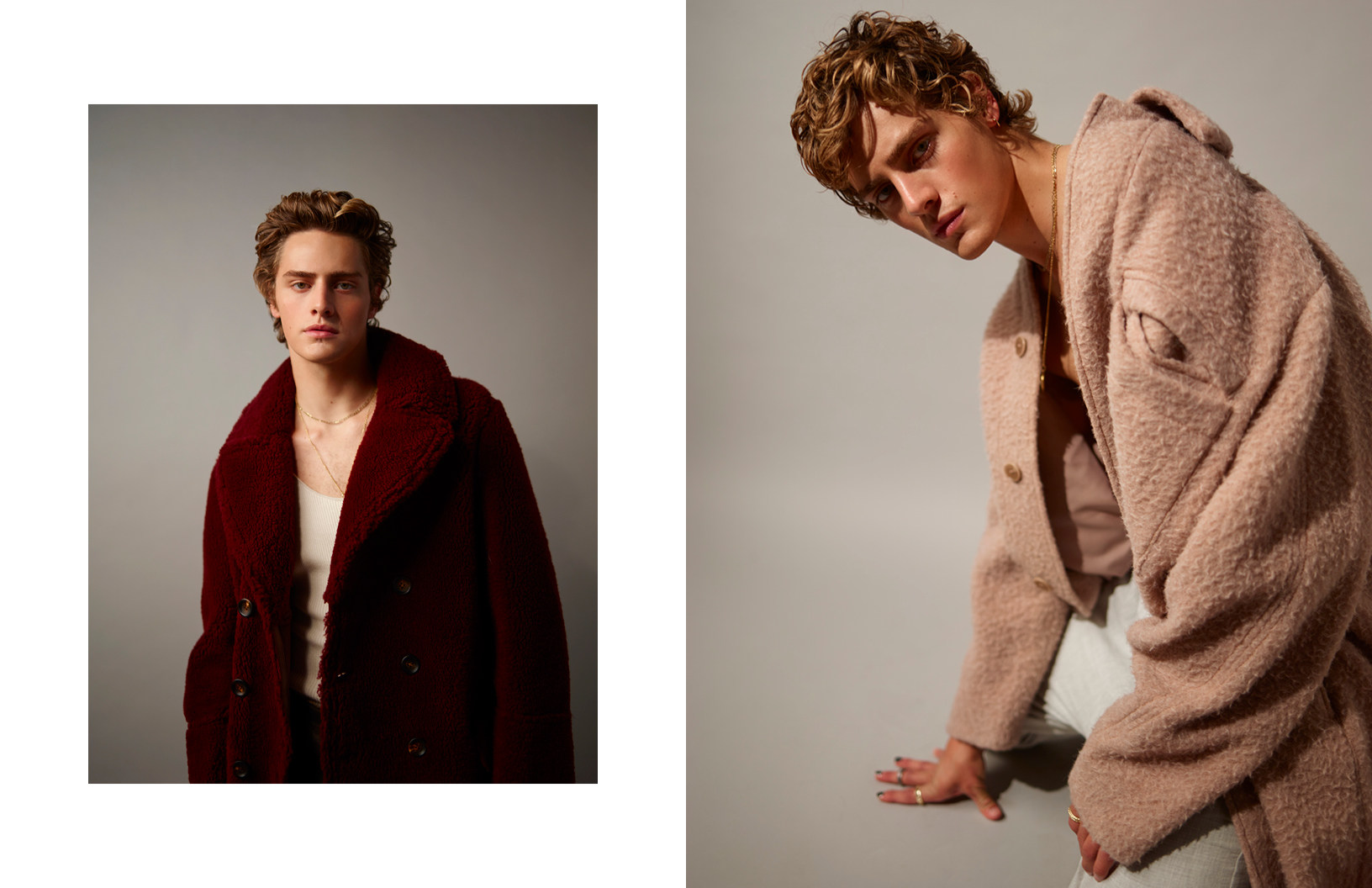 Speaking of, let’s talk Clouds. How did you land the role?

At first, I didn’t dare to dream that I’d actually book the role; I was just excited to be auditioning for something so meaningful in the first place. Throughout the auditioning process, it became clear to me that something felt different than most auditions. I felt certain I was on the right path, whether I booked it or not. I think that the freedom of being at peace with either outcome allowed me to relax into the performance. The rest of it just seemed to fit together like puzzle pieces. I was inside an office building with a beautiful skylight when I got the call that I booked it. I looked up at the clouds and jumped and cried, and I probably freaked out all the businessmen filing past me.

What did you connect with most when you first heard of Zach Sobiech’s story? Were you aware of the story before landing the role?

A dear family member of mine, my Aunt Cherise, had been fighting her battle with brain cancer since before I was born. All my life, my family has been tuned in to anything in the media in relation to cancer. When Zach’s song “Clouds” blew up, that was no exception. Last year was the final year of my aunt’s battle before she passed, so the timing of receiving the audition was a bit ominous. It felt meant to be. After the first audition, I was inspired to write a song for my aunt. I ended up playing that at the audition where I met the producers and director. I believe my aunt and Zach both held my hand through the entire process.

On the other hand, while being respectful to Zach and his story, how did you add your own ideas and character work into the movie?

My castmates and I were lucky enough to meet Zach’s family and friends prior to filming. This was such a gift, and I believe really allowed us to tap into the story in an honest authentic way, and get to know all the relationship dynamics. That being said, we were all character versions of the real people, and while we wanted to keep as close to the heart as possible we all certainly brought our own personal element to the story. I ended up writing a song called “My Little Dancer” inspired by some unfinished ideas in Zach’s journal, which we ended up using a live performance in the movie. It is during a very tender scene between Zach and Amy, his girlfriend. This perfectly encapsulates how Zach provided the base for the character work, but of course, there were gaps I needed to fill with my imagination. I also helped visually fill those gaps by creating a character map of sorts and deciding where I was at both physically and emotionally for each scene and progression of the film. 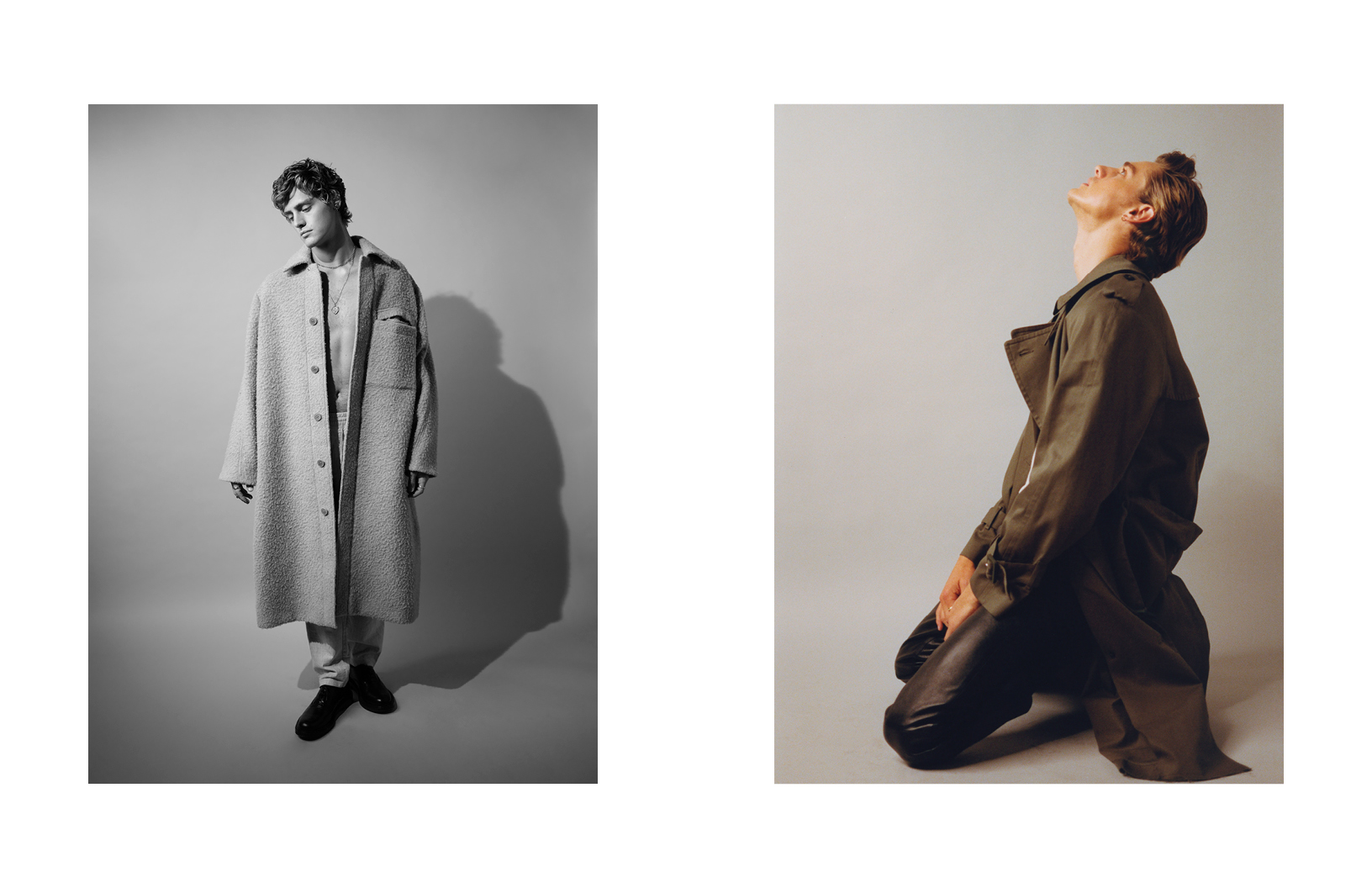 Clouds seems different in that you’re tapping into a place of deep, raw emotions than your previous acting roles allowed. How did you manage to key in on that energy once the camera started rolling?

Projects like Clouds are exactly the reason I got into acting in the first place. While I hadn’t had the opportunity to tap into those types of emotions on screen before, it was always what I was working towards. I feel incredibly lucky to have had the opportunity to express myself in that way. Now while it wasn’t easy to experience those emotions, I did find it strangely easy to tap into them. Not only did the story echo some of my real-life experience at the time, but I have been so hungry to play characters with more depth. Given the chance, I truly dived in as deep as I could, and I plan to continue to do so with any future roles.

You of course could have never known that this movie would have come out in the midst of a pandemic… Or after the surprising, tragic news about Chadwick Boseman’s passing. How do you think the movie takes on a greater or different meaning in the context of these events?

Every step of this movie-making process has been seemingly exactly in order, even if it weren’t a part of the original plan. While this year is filled with so much tragedy and hardship, I believe the release of Clouds couldn’t have come at a better time. This year is anything but ordinary and ideal circumstances, and that is exactly what Zach learned to thrive in by tapping into a real sense of universal love. I believe Chadwick has a very similar ability and connectivity, may he rest in power. My heart goes out to everyone who has struggled in some way this year, and I hope and believe that Zach’s message will resonate deeply with anyone who watches it. We need love right now, through the adversity, and that is exactly what Clouds brings. 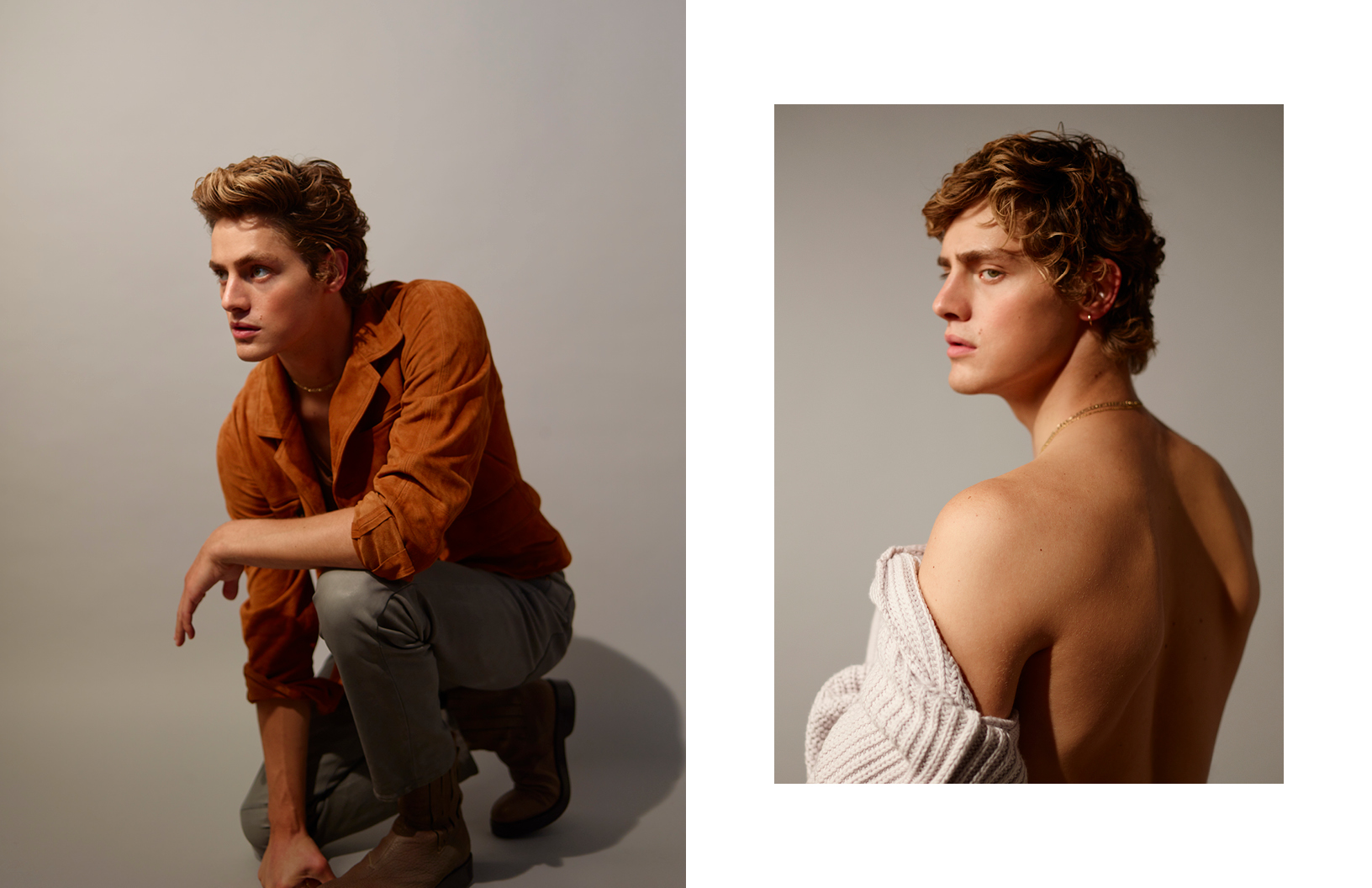 AwesomenessTV, the studio behind The Commute, once described itself as the “studio of Gen Z.” How do you think the stories your generation is consuming are different from the stories before?

This generation of media allows anyone a platform and an audience. Over the past decade, we have seen a boom in meaningful diversity and representation. While I still think there is much work to do in that regard, it is bolstering to see the direction in which we’re headed. There is also so much more content being made now than ever before on a range of different platforms. This is pushing people to tell stories in new and creative ways, exponentially developing.

What I learned throughout filming Clouds is that truly believing in and connecting with the story you’re telling makes all the difference. If I should be so lucky, I would like to take on roles that challenge me to empathize deeply with new perspectives and amplify messages of positive change. I know that won’t always be the case, but those are the types of roles that get me excited. That desire can manifest itself into so many shapes and sizes, so there’s no specific role I have in mind; however, that is definitely the criteria I wish for. As far as music, I am finishing up work on my first song and music video release in over three years. I needed to take a step back to reassess what I wanted to say with my music, and now that I have found security in my voice, I am beyond excited to share it with people before the year is up. 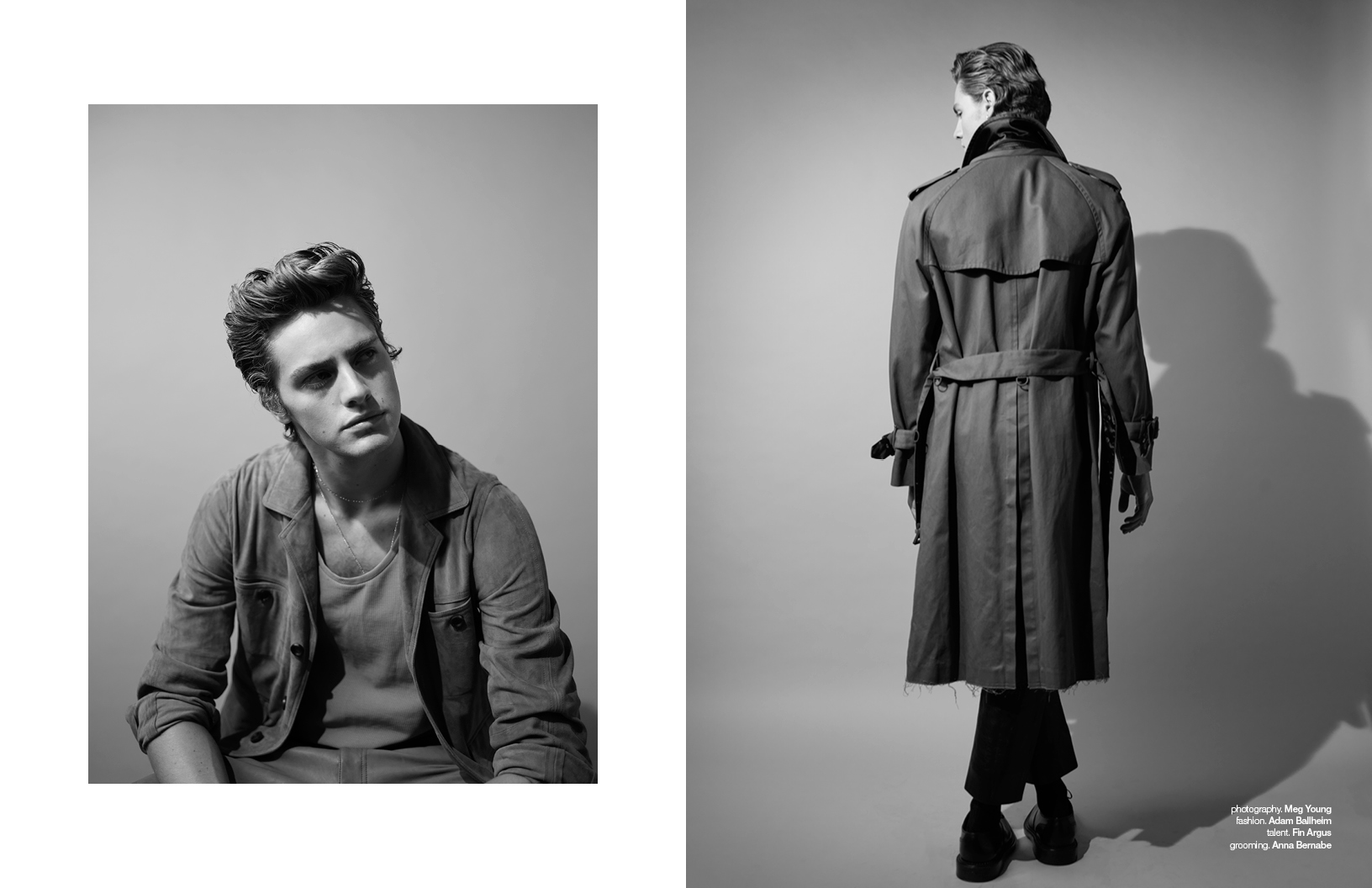