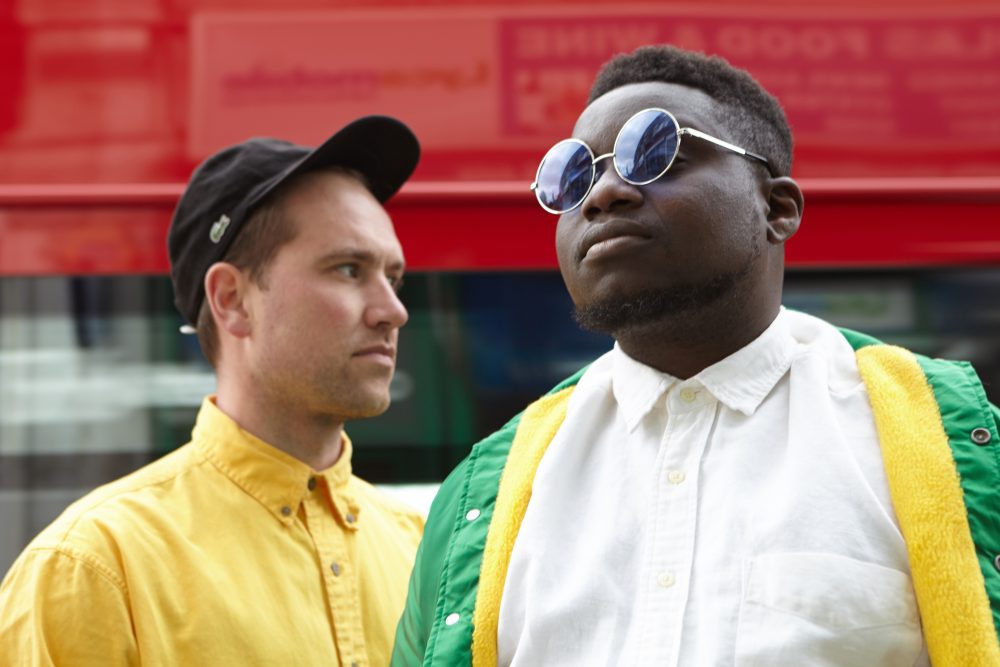 EQUALS are a duo who have been buzzing around the UK music scene with their mix of soul and dance music. Lead vocalist Ade Omotayo (formerly a backup singer for Amy Winehouse) and James Low fuse their childhood influences of Stevie Wonder, Sam Cooke, Smashing Pumpkins and Metallica to their tracks, integrating instruments through their dreamy synths. As a result Daylight Dreaming, the band’s fourth release, is a flowing track with sharp lyrics and a strong, colorful chorus. The song is influenced by our modern day anxiety caused by technology, with lyrics inspired by a talk on modern life by the late Mark Fisher, a friend of Low’s. The duo have now introduced more live band members to the band, strengthening their electronic soul sound, and the perfect place to witness this is with their new music video collaboration for Daylight Dreaming with director Jack Burke.

What kind of music did you grow up listening to?

Ade: My earliest memories of music were from my dad’s car stereo. He would always play Dolly Parton (if she only knew how big she was in Nigeria!) and the Michael Jackson thriller album. As a teen it was really all hip hop especially Snoop Dogg. It was only when I decided to become a singer that I really started to search for Soul. Otis Redding, Sam Cooke, Sly & the family stone, Stevie Wonder, Michael Jackson have been my greatest teachers but I’m really into a lot of things. My favourite band is death grips.

James: Guitars – it was always guitars. My best mate in primary school (also called Ade) gave me a tape he’d copied from his brother with Metallica on one side and Faith no More on the other – like a copy of a copy so it was super-hissy. I don’t think I really liked it but I listened to it until I did. Then I got into Smashing Pumpkins. They taught me a lot about composition and arrangements: that every song doesn’t have to go verse, chorus, verse, chorus, middle 8, chorus.

This was reinforced by my first girlfriend’s Dad playing me Dark side of the Moon by Pink Floyd over and over again. So growing up, music for me became about albums. The album was the art form. It was about the contrast between the songs, the segues and the lyrical journey. I think that’s why I get excited about something like Kendrick Lamar’s Pimp a Butterfly – because it’s like a modern Dark Side of the Moon; lyrics in one song reference and inform another, there’s a theme and a message.

We met Jack through our mutual friends in the anti-rap/alt-folk band Buriers. He approached us just after we released our last EP Old Habits and said he’d like to work with us. Jack is the perfect mix of loads of creative energy but also great at nailing the logistics and delivery. He seems to get a real buzz out of both which is a rare and valuable thing, especially when you’re working on a limited budget.

Your song is inspired by the escape of the pressures of modern society by daydreaming. What inspired this theme and how did you manifest this in the lyrics, music, and the video?

James: First and foremost it’s inspired by something nearly everyone can relate to – feeling burnt out, frazzled, anxious…exhausted even; unable to stop take it easy – let alone daydream – especially living in London. A few different things contribute to that. One of them is the type of jobs we do now. I found the Ian Curtis quote so interesting, “I used to work in a factory and was really happy because I could daydream all day” because of the impossibility of daydreaming when doing the kind of modern, post-industrial jobs we have now, jobs that occupy our minds as well as our bodies; jobs that exhaust us physically and mentally. Like Franco Berardi says our work becomes like our second skin, not just what we do but what we are and care about. How do you escape that, even for a minute? Bring smart phones into the mix and you can never leave work and “clock out” because you carry your work around with you in your pocket. Even if your boss doesn’t expect you to answer emails out of office hours you do anyway because you’ve adopted what your boss wants as what you want.

Then in between emails you’ve got social media to attend to, a modern exercise in “keeping up appearances” while catching up with the 5 billion Youtube videos that are watched that day. Mark Fisher called this the “cyber space stimulus matrix” and talked about the “aesthetic poverty” it reduced our lives to. Filling every bored or idle moment with scrolling cyber stimulation rather than letting our eyes and minds wonder and noticing the beauty in the world around us. Problem is, as Curtis kind of alludes to, an idle brain is a creative one. So I challenged myself to put myself in a situation where I could daydream.

How did the idea of the Daylight Dreaming video come to be?

James: Jack really liked the idea behind the song. We went through a couple of iterations until we arrived at the final treatment. The basic idea was that life feels repetitive and like it’s speeding up. So the character would repeat the same day; get up, shower, eat, travel, work, pub, travel, tv, bed; and the pace of this sequence would speed up through the video. When it came to the chorus, Jack really pushed himself to think of something that would break this cycle and, as he described it, “have something a bit meta”. It took about a week until he called and excitedly explained the idea of the camera becoming a character that the protagonist is trying to escape from. So on chorus the protagonist punches the camera, having been totally still up to that point – suddenly you realise this is a POV and start chasing him around. The one time the character manages to escape the camera he sits in a park and enjoys the feeling of the sun on his face – a little message of hope that we can still escape the cycle and daydream.

It was great you used a Walkman at the end of the song – what’s the story behind that?

James: I recorded the synth at the start of Daylight Dreaming onto an old cassette recorder so I could mess with the sound, rewinding and fast-forwarding it. It’s kind of a nostalgic thing – my first experience of music was on a cassette tape. I’m drawn to tapes, walkmans, because of the memories of music and a format that was more real, analogue and tangible. I liked having to turn a tape over, the first track on side B feels like a fresh start in the album – a second act.

With today’s music and the way its shared, is there a love/hate relationship you have with the internet and smart phones?

James & Ade: Yeah definitely. We have a song we’re working on at the moment called Hi Def Retro that is about the idea that you can’t escape the weight of creative history. So many amazing artists and songs have come before you. The internet makes all that music available all the time, near enough everywhere – so we create under the pressure of our heroes. Having said that I think it’s great that it’s much cheaper for people to make music and share it now; that you don’t have to be rich or have a label “invest” in you. Smart phones are just a necessary evil, they’re part of the assumed fabric of modern life – certainly for young people in rich countries. 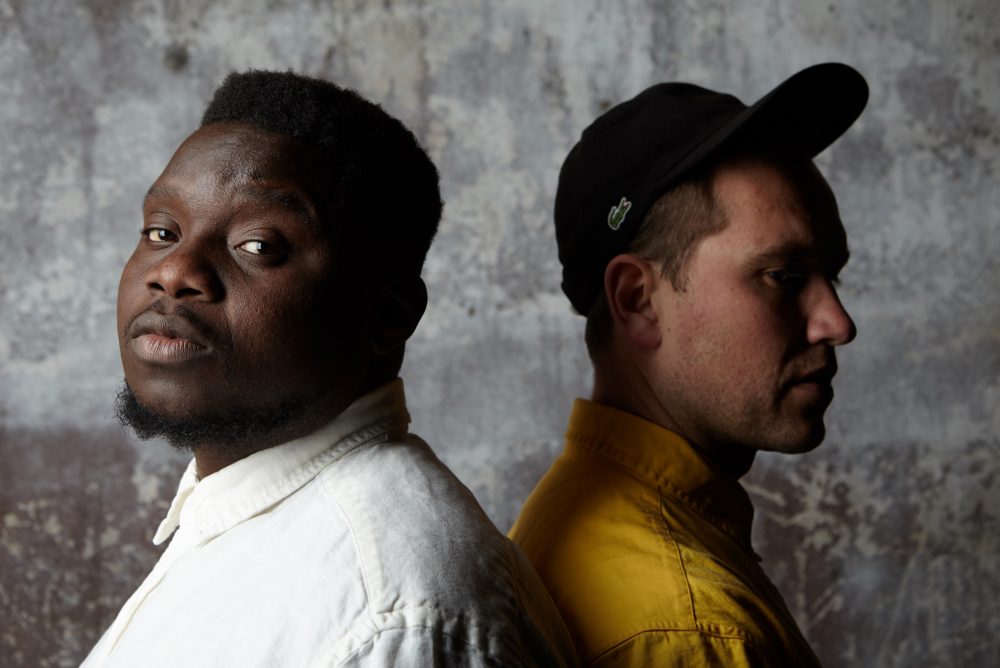 What did you learn from Amy Winehouse and working with her?

Ade: What Amy would often tell me is she wanted me to see that I could do this too. We were in a band together in the early noughties: we tried to apply the same passion playing to a bunch of school kids with fake ids to hundreds of thousands at a festival. I gained a lot of experience playing huge venues and she gave me license to just be myself and contribute to a great show. The band comprised some tasty jazz talent and did wonders for my ears and knowledge of that particular genre.

Tell us a little bit about working with Gorillaz…

Ade: It’s a real honour to work with Gorillaz. I still don’t know how they found me and I don’t care to be honest. I hadn’t done backing vocals in about 2 years but I couldn’t turn this down. There’s a song with Pusha T and, one of my idols, Mavis Stapels for God’s sake! We are still in the early stages of rehearsing and warm up shows but the sheer scale of it all is larger than anything I’ve been associated with.

How do you reckon your previous collaborators have influenced your music?

Ade: I think with Amy,  I gained a more eclectic outlook. No music is completely inaccessible. It’s really how open you are at the time of hearing said artist. I’m learning the merits of hard work from Damon Albarn. Deliberately putting in the hours to get what you wish for.

Tell us about the addition of the new live players in the band? What instruments are they playing? What were you looking to add to the band?

James: Equals is the exception for me. I’ve always played in bands with “real” instruments. Writing exclusively electronic music out was a necessity rather than choice. I was moving around a lot, first down from the Leeds then round different parts of London. Now I’m more settled it’s easier to re-integrate live instruments into the songs. Chris Hargreaves (Submotion Orchestra) is a good friend and amazing bassist. He introduced us to Jonny Tomlinson (Bonobo) who played keys on the live performance of Black on Gold – we’re doing some writing with him too.

A Seat at the Table (Solange) really got me excited about horns again so we got Ryan Jacob and his “killer horns” section in on trumpet, sax and flugelhorn – who literally killed it. We met Awkward D’nure at a gig, she’s an incredible young vocalist who features on quite a few of our new songs. I’m also playing a lot more guitar again. Working with such great musicians really opens up new possibilities for the music, it broadens the sonic spectrum because every song isn’t just gonna be a sub bass, a synth and some beats. It feels like we’re finally making the music we were meant to make.