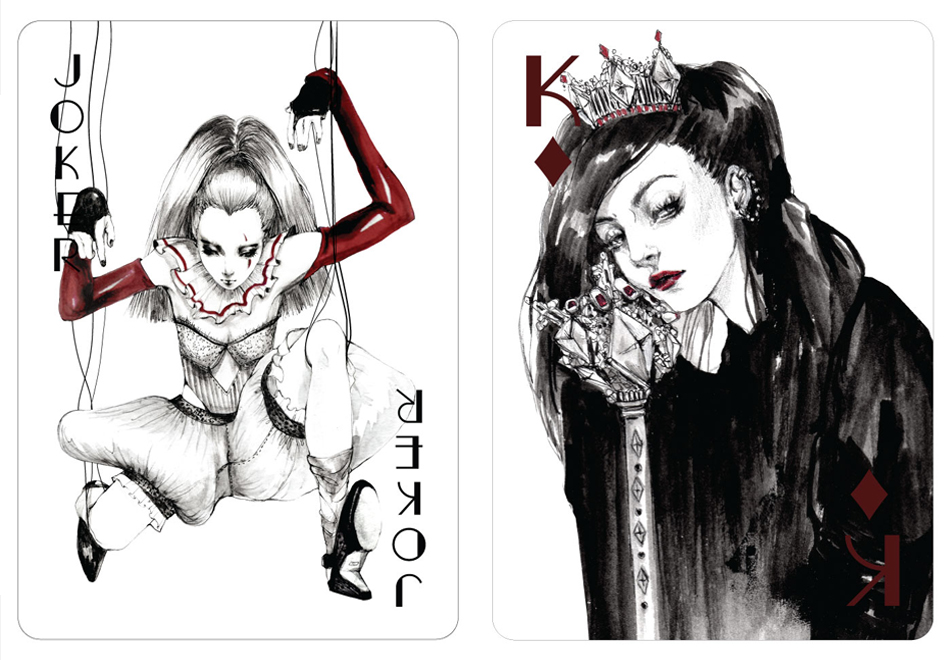 Having studied illustration at the Art Center Pasadena in her native California, and fashion design at Central Saint Martins, Connie Lim is well versed in all aspects of fashion creation; but she has found herself most content with a pencil in hand, as opposed to a needle. Focusing on illustration (for the moment at least), Connie’s latest and most ambitious project has seen her team up with Kickstarter to create a hand-drawn, sartorial-themed deck of cards. Possessing a dark and theatrical style, influenced by the likes of Alexander McQueen and Gareth Pugh, Connie’s work lends itself well to the sinister trappings of this type of gaming equipment. Schön! caught up with the illustrator to find out more about the Decked Out project, her inspirations and her hopes for the future.

When did you get into illustration?

It was actually after high school, I took a year off and I was trying to decide what I really wanted to do with my life. I have always drawn, ever since I was young, so ideally that was the direction I wanted to go. I started foundation art, life drawing, anatomy and all that after high school, and then I went to a university in Los Angeles for illustration and it just went from there.

You’re originally from LA, but you’ve also studied at Central St Martins in London, have these places inspired your work?

Oh definitely! I think London inspired me the most because it’s such a different setting to me, whereas in LA it’s my comfort zone. [London] was such a great city, it has lots of great art, it’s a creative city I would say; so it was nice to be part of that.

Do you plan to return?

I’m going back this month, the reason I left was because my visa expired which was very unfortunate, so I’m just going back for three months to see what happens.

You’ve studied both illustration and fashion design; do you ever miss the physical creation of making clothes?

I do enjoy it, I’m just taking a break from it. But I realised when I was going to Saint Martin’s that illustration is a bigger passion. Designing and drawing for me is really fun, but I felt so much pressure actually physically making the clothes. I didn’t want to go down that route so after I graduated I really thought about what I wanted to do. It was obviously illustration, it makes me so happy, when I’m drawing I can just forget about everything. 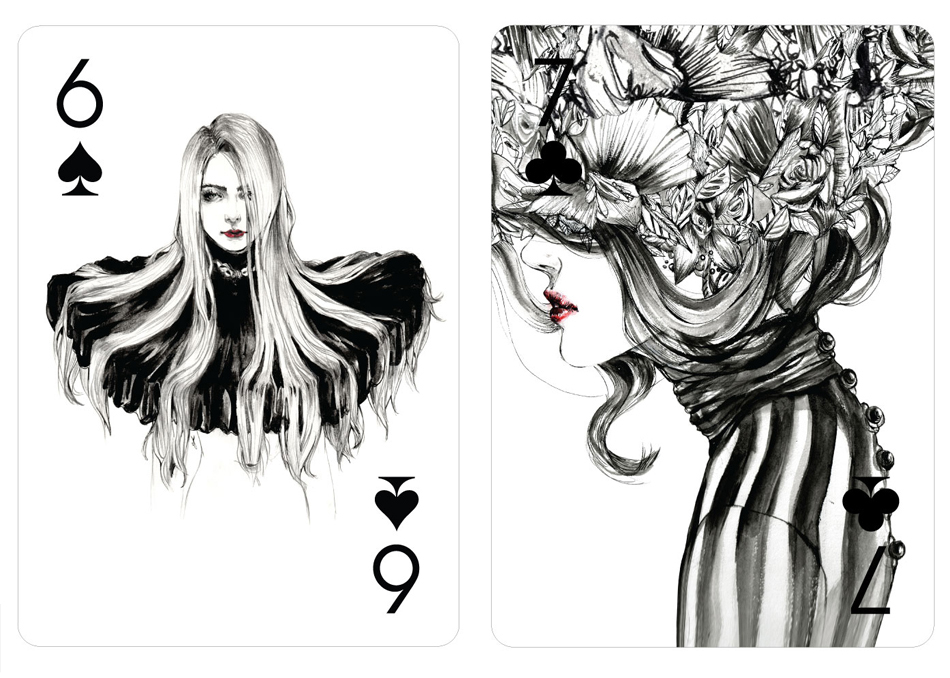 Can you tell us a little about the Decked Out project?

I started this project in my early twenties when I was first going to university. It was a project I really liked and thought I’d come back to, but I had to finish uni, I had to work, I had to make a living… This whole card series is kind of my journey to the current me, I think it’s a good way to end this chapter of my life. I came back to LA and I decided to do this project, I always wanted to get it published, and chose Kickstarter as a platform because it’s a good way to get it out there and to get it funded. The project went very well, I got funded 140%, which was more than what I had anticipated so I’m very grateful. The response was very strong from the art and fashion crowd.

What attracted you to playing cards?

In my first year in college we had this final project, we had to get Visionaire Magazine – apparently once a year they pick a theme, like it could be ‘white’ or ‘play’ – we had a list and so I just randomly picked deck of cards. I thought it would be cool to actually make the cards with my drawing.

You have cited Alexander McQueen as a great inspiration, what do you like about his work?

I can relate to his creations, they’re quite dark, they make a statement – it’s an attitude I was really attracted to. He’s so amazing in the way he can express feeling and emotion through clothes, that’s what drew me to fashion in the first place.

Which other fashion designers do you admire?

Before St Martins it was Rick Owens, Gareth Pugh – very dark, very theatrical. But after going to St Martins my views on fashion changed quite a bit, Ann Demeulemeester, she’s amazing. I feel she’s very narrative, she can tell a story through clothes. It’s very romantic and I enjoy that. I really like Haider Ackermann, and I’m really in love with KTZ these days.

What are your hopes for the future?

I guess in the long run I want to be known as a fashion illustrator. Basically, I want to do a lot of work for different designers, and hopefully publish my own art book. I do feel fashion illustration is a genre of art, there’s a couple of different ways I want to go, but for now I’m going to focus on publishing.