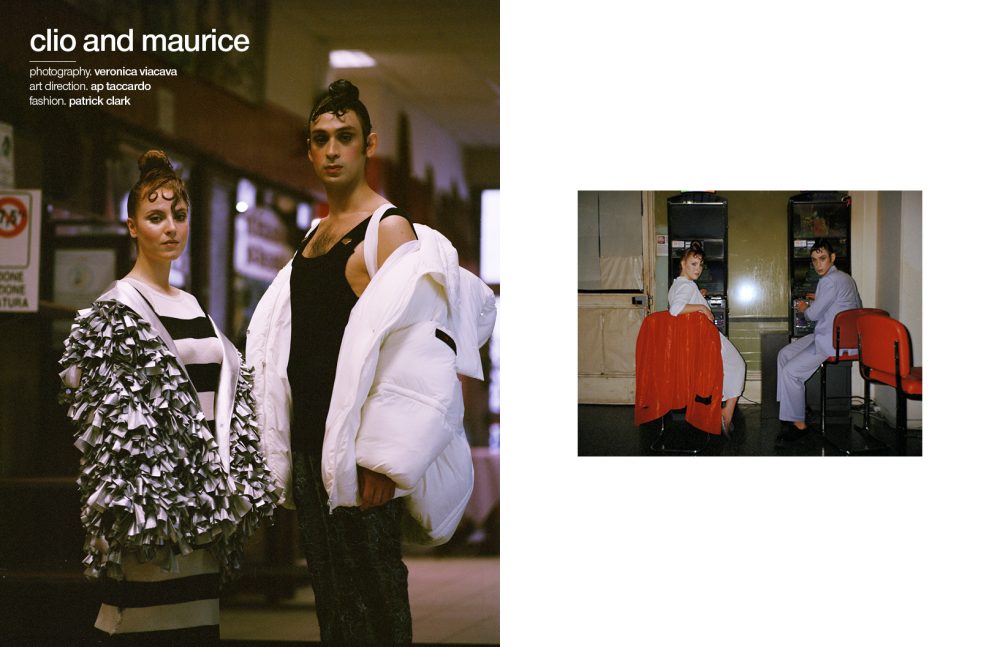 Born on the road and across borders, Clio and Maurice represent a fusion of styles, genres, and sounds – first and foremost that of voice and violin, but then also of electro, acoustic, jazz and classical elements. Trailblazing across Europe with a tour before launching their first EP, Clio and Maurice and their musical line-up refined their craft on stage before hitting the studio, teaming up with producer Giuliano Pascoe to develop their signature sound and vocals. After an extensive touring schedule that took them from Morocco to Holland, the project returned to main base, which was pre-covid Milan, to work on the new tracks. Taking their cue from experimental pop projects such as Arca, Rosalía, James Blake, but also from Björk – mother of all things electro-pop-symphonic – Clio and Maurice established an emotional soundscape, distinctive and original. Fast-forward to 2022, and split between Milan and Berlin, the project is now on a final tour of this initial chapter before the project evolves, taking next steps, and expanding as Clio M launches her first solo project. Schön! speaks to Clio M and Martin Nicastro about evolving, delving into new sounds, their history, vocals and inspirations, just before they head on tour for the summer.

Clio – Martin and I were both involved in different projects at the time. Martin had an idea after a tour in the Balkans with Pashmak. Inspired by that tour and its energy, we decided to start Clio and Maurice. A friend invited us to open for her at a gig in November, and we’d only started writing music in late August, so we were catapulted onto the stage. We didn’t even have the lyrics or anything when we accepted.

Martin – Above all, I had to go on tour for three weeks in Russia, and was going to come back three days before the live.

Clio and Maurice was born from the live shows, in which case…

Martin – Apart from the idea of starting out solely with voice and violin, which was something totally new, in terms of what was already out there, and what we’d done before, our tour was light and travel-friendly, we went to Paris straight away. The first year we really started touring. We started producing and arranging the tracks after that first year, working with Giuliano Pascoe as our producer. 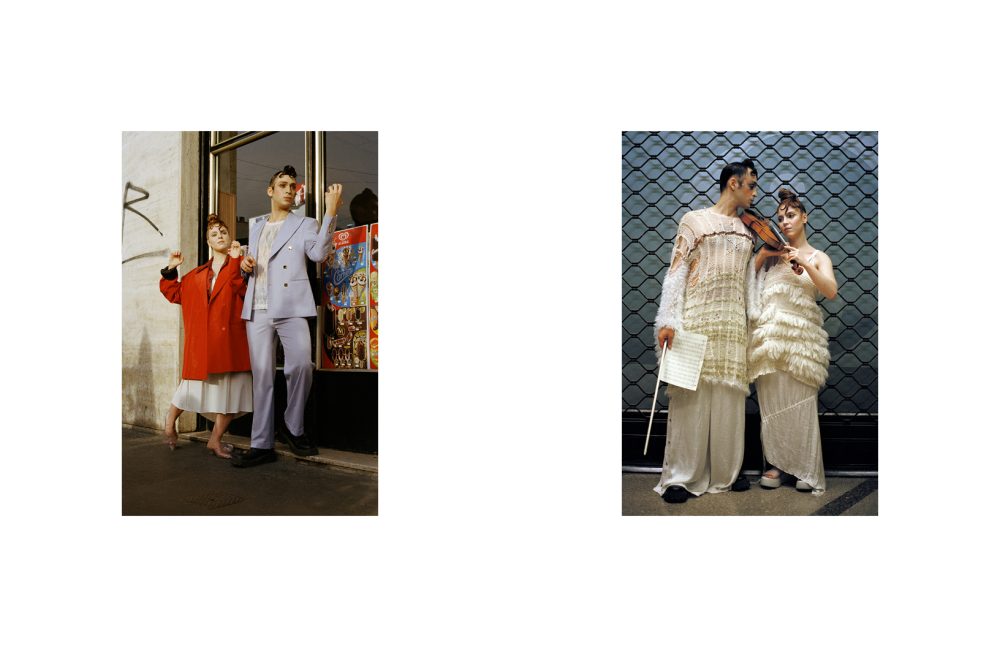 How did you transition from lives to recording?

Martin – With Giuliano [Pascoe], and it was actually almost by chance too. He’d starting producing on the last album of Pashmak. So on our project, the choice of working together seemed fairly obvious.

What differences do you notice between lives and the studio?

Clio – The studio can be quite risky: you’re in awe, usually. You’re in the booth alone, so your only contact with the world is through the headphones. You have to find the creative aspect of the studio; it really is an amazing space. There are no external factors intervening in the process – you can really try things out. You don’t usually try out new songs directly in front of an audience, that seems obvious – but that’s the way we did it.

That historical moment, I feel, had a huge impact on your writing. The social effects of what was happening are really present in your new work.

Martin – Absolutely. We really came into a sort of political consciousness in our work during the pandemic. With our closest friends, political conversations became central to everything. Everything was at a standstill, so we could see our lives from the outside. We saw contradictions, themes, challenges. We didn’t see ourselves going back to writing the way we did. Music and voice are always one, we never distinguish between the two, but with this change we deliberately decided to go from abstraction to something far more concrete. The lyrics take positions, are clear and are pronounced.

Clio – As an artist, I would say I’ve always had a political consciousness, but I’d say we really came into this consciousness as musicians. I for one needed to use music as a vehicle for these ideas. It was fairly spontaneous, in a moment of need. A series of preconceived ideas I had suddenly fell apart. In terms of lyrics, I stopped worrying about being too explicit – it was a sort of unconscious worrying. It was an inevitable process of maturing as musicians.

What would you say your main musical influences are?

Martin – Arca was a great inspiration, for me, especially at the beginning. They worked with the discipline of really working in the process – if the track wasn’t recorded and finished in a short time frame, they would scrap it. We had this on a couple of tracks, at the beginning, on tracks like Blue. The emotions of Arca – extreme, all of them – are a reference, from epic, to tragic, to poetic moments and softness too.

Clio – James Blake was always someone we listened to a lot. FKA Twigs too – Magdalene was a huge influence for me. Vocally too, technique and emotion co-exist beautifully in her work. Listening to that album, I really realised what a fantastic singer she is – obviously as she started out as a dancer, you don’t necessarily think of her in those terms.

Martin – Jokes aside, Arca produced FKA Twigs, and Björk too, and they’ve worked together too. And James Blake and Rosalía have collaborated too…

A nice network of references then! 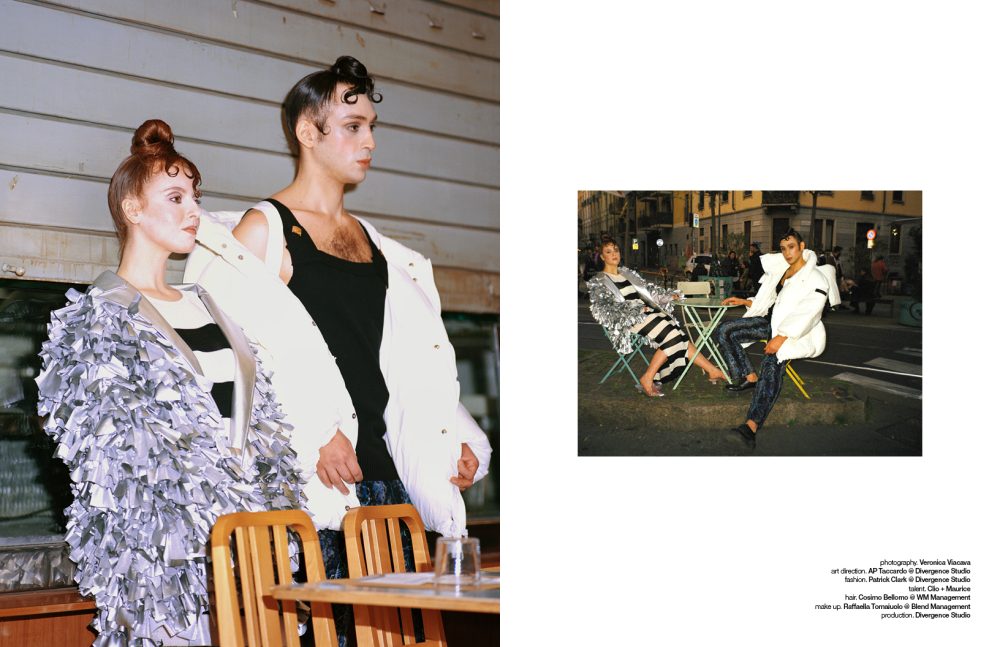 I know Clio M is working on a new project – your first solo project. When listening to the new material that you’ve both been working on, there’s definitely a new style of writing that’s emerging. Clio M, you’ve been working on lyrics and writing, whilst Martin, you’re still working on composing. There’s a sense of resentment, of rage in your new tracks. Would you agree with the term?

Clio – Yeah, definitely. Almost a desire for revenge, too. Delusion too. I sway between different degrees of optimism and pessimism. From my upcoming album, A Good Day is a particularly angry track – it’s my voice, but it could be any woman trying to go about her day in a serene way. At some point during the day, she’s harassed. Her day is ruined. The chorus is “All I needed was a good day”, but you who harassed me ruined it. It talks obviously about a phenomenon that women have to deal with on a daily basis, by simply leaving the house. We have to take into consideration that we can be harassed at any point. It happens, unfortunately, really often. I wrote it after an episode that had happened to me. Catcalling is so common that we don’t even remember it. This case was more intense: I was felt up in the street. It was humiliating, on so many levels. It’s stupid to feel humiliated, obviously, but the powerlessness is infuriating. That’s where the track came from.

Ecology, also, is a recurring theme.

Clio – Earth is one of the tracks, yeah. It’s a track of anger though, directed specifically at the generation of our parents. Shout out to the ‘rents!

Martin – In the lyrics, Clio explicitly sings: “And you don’t care, you won’t be there,” which is full of the resentment we spoke about before. With the track, and the strings, the effects create this sense of electronic soundscape. It cuts to the strings in a more acoustic part, before slamming back into the electro, in this artificiality. The lyrics also say: “Hope, Is not enough. Faith, It’s just too late.” There’s this duality between natural sounds and the sound pessimistic consciousness – great words don’t matter anymore.

Clio – You can see this in the ways in which people protest for climate action nowadays. The younger generations are super inspiring on that front. We protested at high school too, but there’s a shift now, which comes from the urgency of the matter. That’s where the anger comes from.

Martin, you’ve been collaborating on projects for composition and playing. What are your criteria when looking for new projects? Is it important for them to align on themes you are interested in?

When I work with others I tend to make a distinction between projects I’m invested in for the long run and others that are just temporary collaborations. In the first case, like with Clio M, it’s important to me not only to resonate with

the musical vision but also to share a strong, deep, personal connection. In the second case, I often have to adapt to different musical contexts, like alternative rock music or Italian pop, which is fun and rewarding but it’s not something I would identify with.

Apart from the tour – which will take you throughout Italy and to Berlin – what can we expect for the next few months?

Clio – The tour kicks off in July in Italy and in September further afield. Clio and Maurice are evolving too; this chapter is coming to an end and our project as it is expanding with a bigger team. My solo album is ready and in its final stages pre-release – something new is in the works, so watch this space.

Clio and Maurice are on tour in July and August.