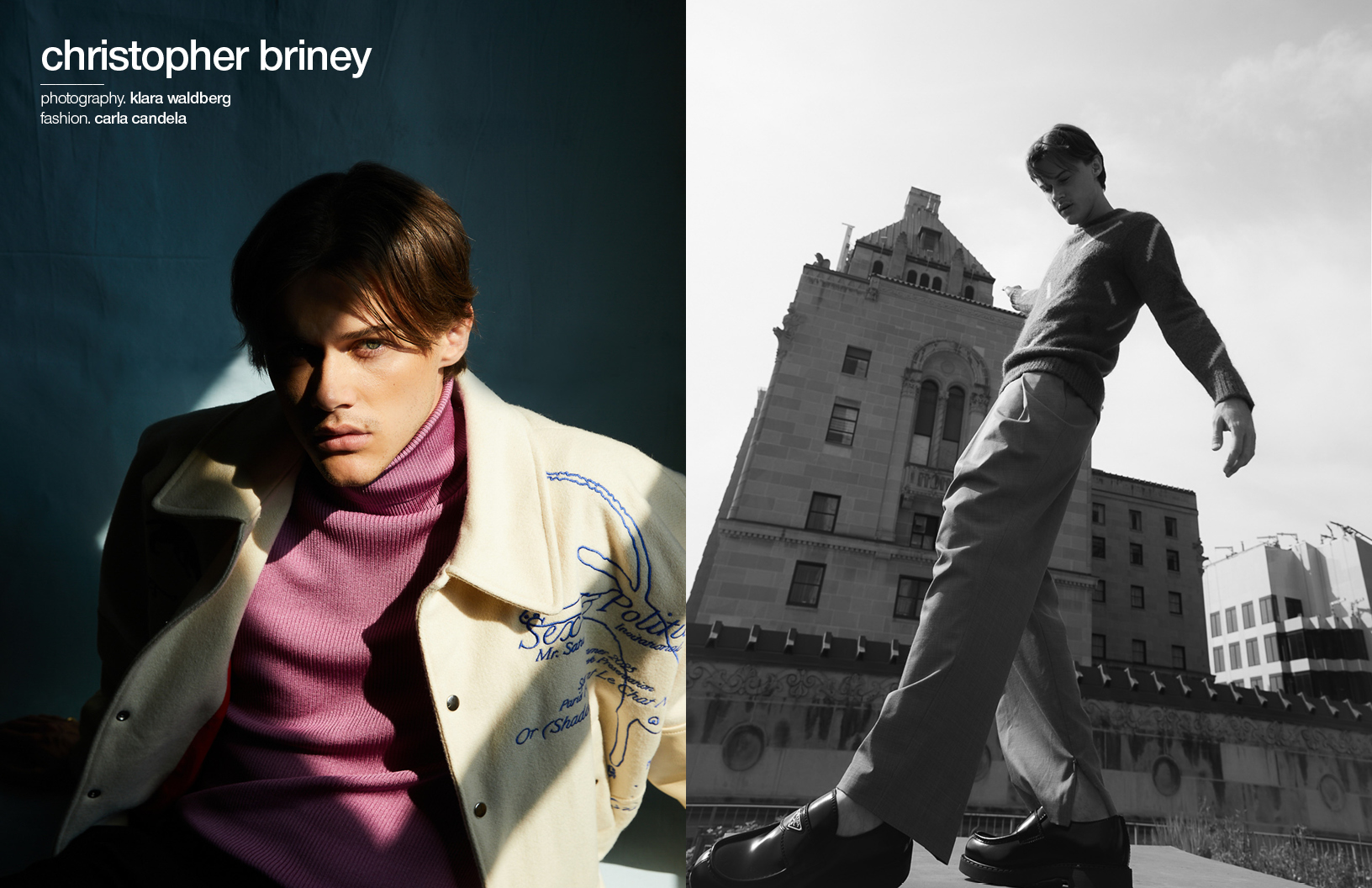 Although he is at the start of his career, Christopher Briney proves he is more than ready to tackle lead roles with a stunning performance in Daliland.

Christopher Briney has always loved movies, but it wasn’t until high school that he discovered he might want to be in them. The 24-year-old American actor followed that passion into a BFA in his craft from Pace University and has since stolen scenes (and hearts) portraying Conrad in Amazon Prime’s hit series, The Summer I Turned Pretty, based on Jenny Han’s novel by the same name. However, it isn’t only on-screen work that interests Christopher. He also has a passion for direction. An interest that co-exists well with an acting career. His most recent project Daliland was the perfect opportunity for him to learn more about both.

Daliland, which was the closing gala film at this year’s Toronto International Film Festival, focuses on Briney’s character, James, an art aficionado and gallery assistant who suddenly finds himself both enraptured and tangled in the larger-than-life world of renowned artist Salvador Dali. The fictionalized bio-picture is directed by Mary Harron (American Psycho, The Moth Diaries). Under her guidance, Christopher Briney brilliantly carries the film, alongside Ben Kingsley and Barbara Sukowa, allowing his character room to grow as the film progresses while maintaining the characteristics that make James who he is.

Fresh off a move back to New York, Christopher Briney speaks with Schön! about his new film, what he learned from his co-stars, his future as both an actor and a director, and more.

Thank you! I hope a lot of people get to see it. I haven’t heard much yet. Thank you for watching.

Yeah, we were the closing night gala film which is pretty special.

How was that experience for you?

It was so cool on every level. I’ve had dreams about doing festivals for as long as I’ve loved movies, whether it’s directing or acting, so to actually get to do that was cool. I got to feel like a star for a few days. It was really fun.

I went to TIFF, but I went the first week.

The first week is wild! I was there to do press. Everywhere I looked there was someone who I admired. You don’t think they’re real and then they’re in front of you. 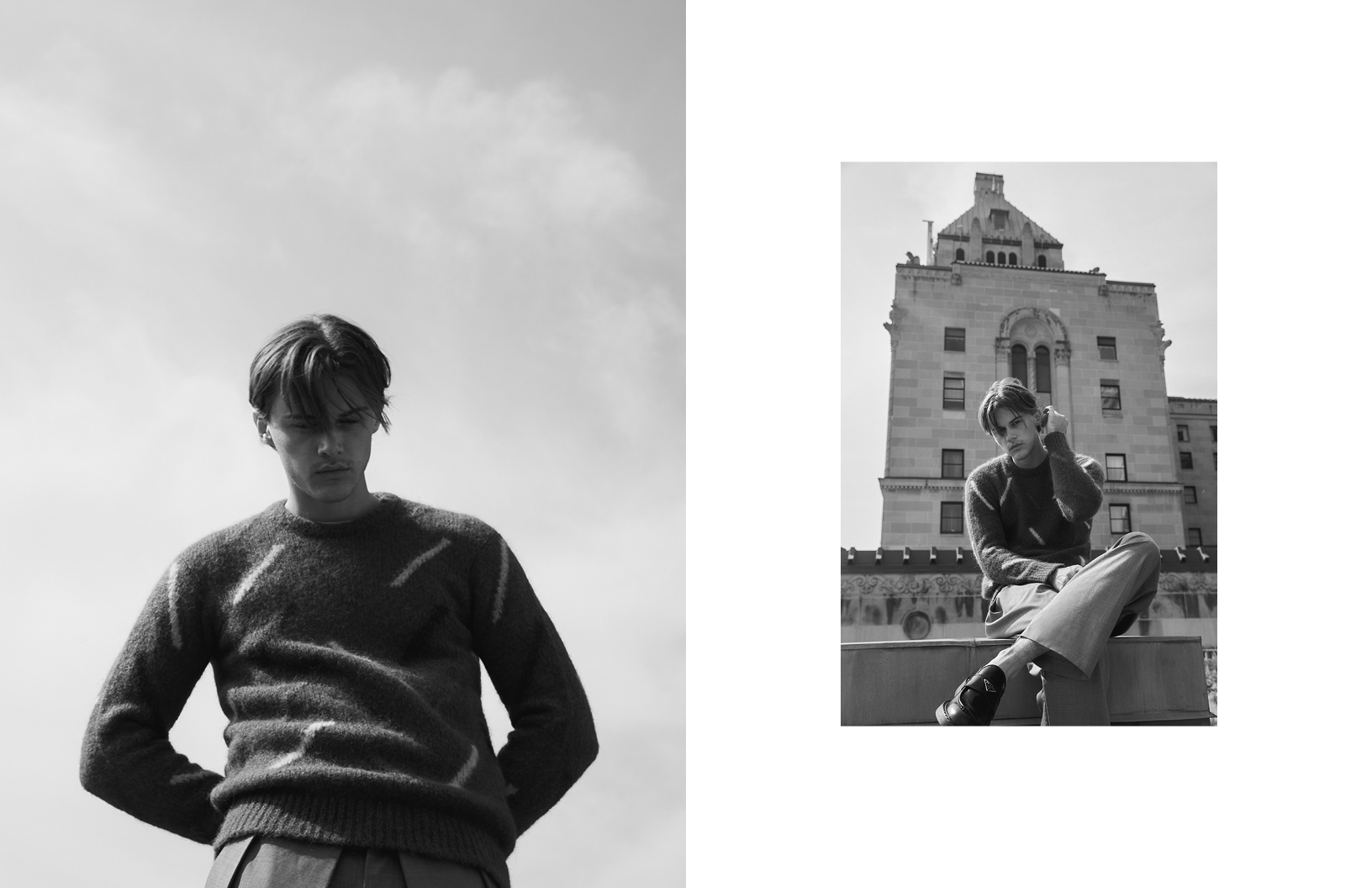 I know. It was my first one and I had a great time. I wish I could have stayed for both weeks. I could have caught Daliland there. I didn’t know much about Salvador Dali going in, so for me, it was pretty illuminating. How much about the story were you familiar with before taking on the role?

I hardly knew anything. I knew his name. It was in my textbooks. I knew about the melting clocks. I knew the mustache. But that’s about it.

So, about the same as me.

He’s this iconic figure who transcends the art world. I didn’t understand why until I read the script and did my own research. I had no idea he had this l extravagant, Warhol-esque, legendary life that he was living or that his work spans decades.

I like having the film as an avenue to learn more about him and I think other people will too. Tell me about your character, James.

James is one of the few characters in the story that is not directly ripped from a real person. He gets to be malleable in the writing of the story. He’s based on an archetype that was present in Dali’s world. There were Jameses. There were these young men who were around Dali helping out although it’s not sure what they were doing. They were used and spit out. But, I think in the framework of the story, James is the naive window from which the world is entered. I think he provides the framework for the extravagance that is Dali to shine through.

He goes on quite an eye-opening journey during the film. Is there any advice you would give him?

Oh, man, honestly, I think from my point of view, James has done the right thing. He’s taken a lot of leaps of faith. He’s leaning into his naïveté, and he’s walking into the unknown. I admire that about him. I think it gets him into some trouble, but I think, in the end, he’s better for it. So I think he’s doing the right thing all in all.

I agree. When those opportunities come, you have to take them.

Yeah, cause he could have looked back and thought, “Oh, I could have been Salvador Dali’s assistant.” 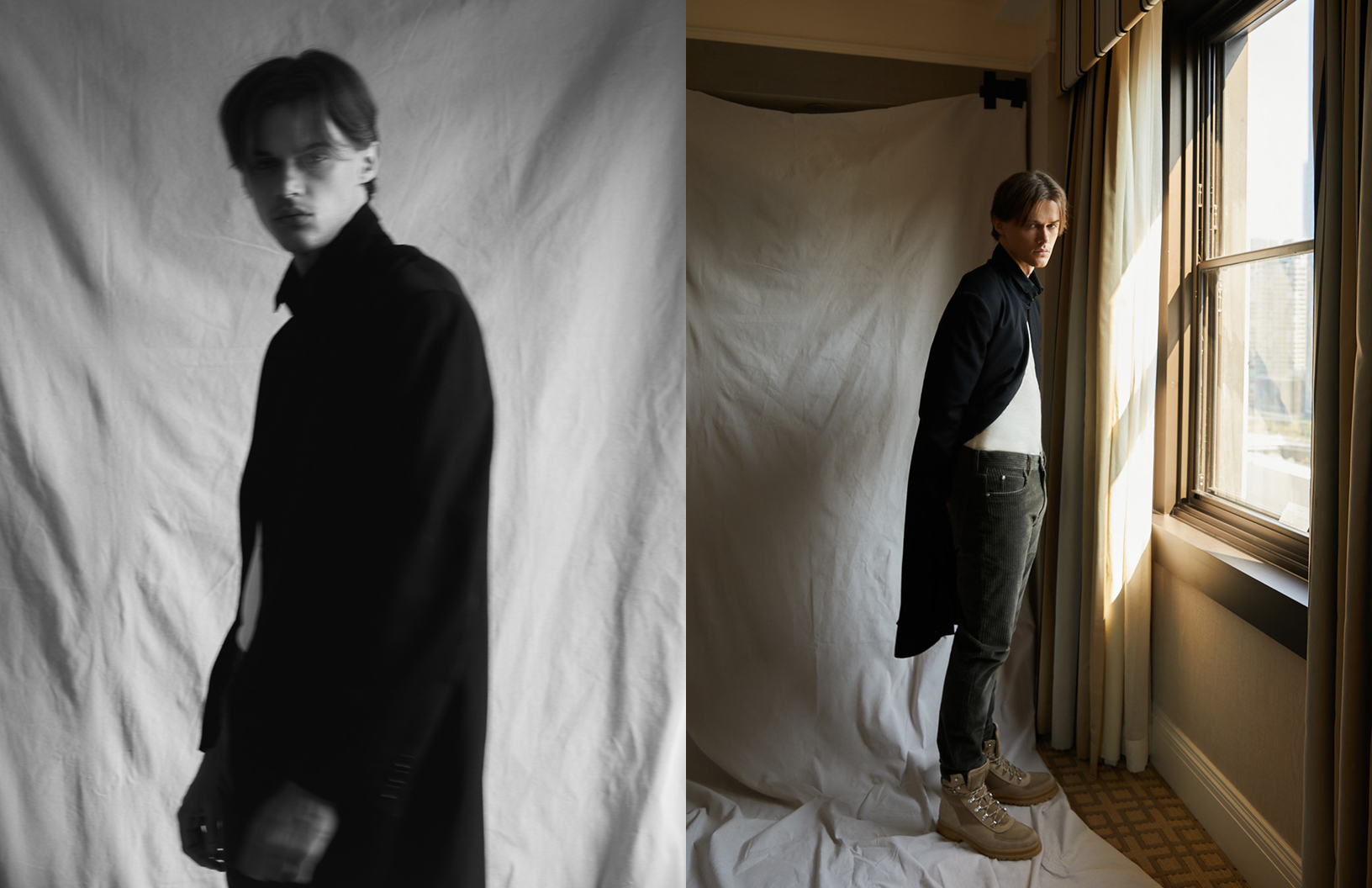 Exactly. While the film boasts quite an ensemble cast, it does focus on James. You’re in almost every scene if not all of them. For someone at the beginning of their career, what did the experience teach you?

It was terrifying and it was nice to know that was okay. I was allowed to be terrified and all these other actors at different points in their careers also were scared in their ways about their things. I guess it’s hard to humanize the situation. Because when you watch movies. it all seems so untouchable. Even in a bad movie, the world on your screen exists in this realm that someone doesn’t understand. To be able to touch that was humbling and I feel very lucky. I felt like everybody was doing the same thing and had the same problems that I did in their way.

I knew very little about the film before I watched it and I had no idea how much of a lead role you had. I was very impressed. You did a great job.

Thank you. I remember reading it and I was like, “I’m not gonging to get to do it, but it sounds good.”

And then you got the part! One of your more frequent scene partners is Ben Kingsley. What was it like working with him?

He’s a pro. He’s pretty cool. I think he’s got a bright future. He was really sweet to me. He was really kind to me. He was a big advocate for the other actors. He would fight to make sure we all had l our space and our props in order. He made sure that we were looked after and things like that. I have nothing but kind things to say about him. He is a brilliant actor. One of my favourite moments during filming was a scene where James is working in the gallery and Dali and Gala are fighting in front of him. I had a moment when we were shooting where I was watching them act and just thought “wow. They’re really good.” It was wild. There was a lot to learn from everyone on this project.

The film also has a seasoned director. As I read you also like to direct, did you take anything away from working with Mary Harron?

That’s a great question. I took a lot away from working with her. It’s like I was saying earlier, working on Daliland humanized the situation a little bit. I had a few conversations with Mary about directing and she was like, “I just figure things out as I go.” She’s really collaborative. I feel like it’s easy to read a book about directing or hear a quote from a director that you admire, and be like, “oh, that’s the right way to do it.” But Mary has so consistently for so long, had her unique approach, and been unapologetic about that. I can’t even express how much I admire and respect that. The main thing I took away from working with her is your approach is as good as anybody else’s. 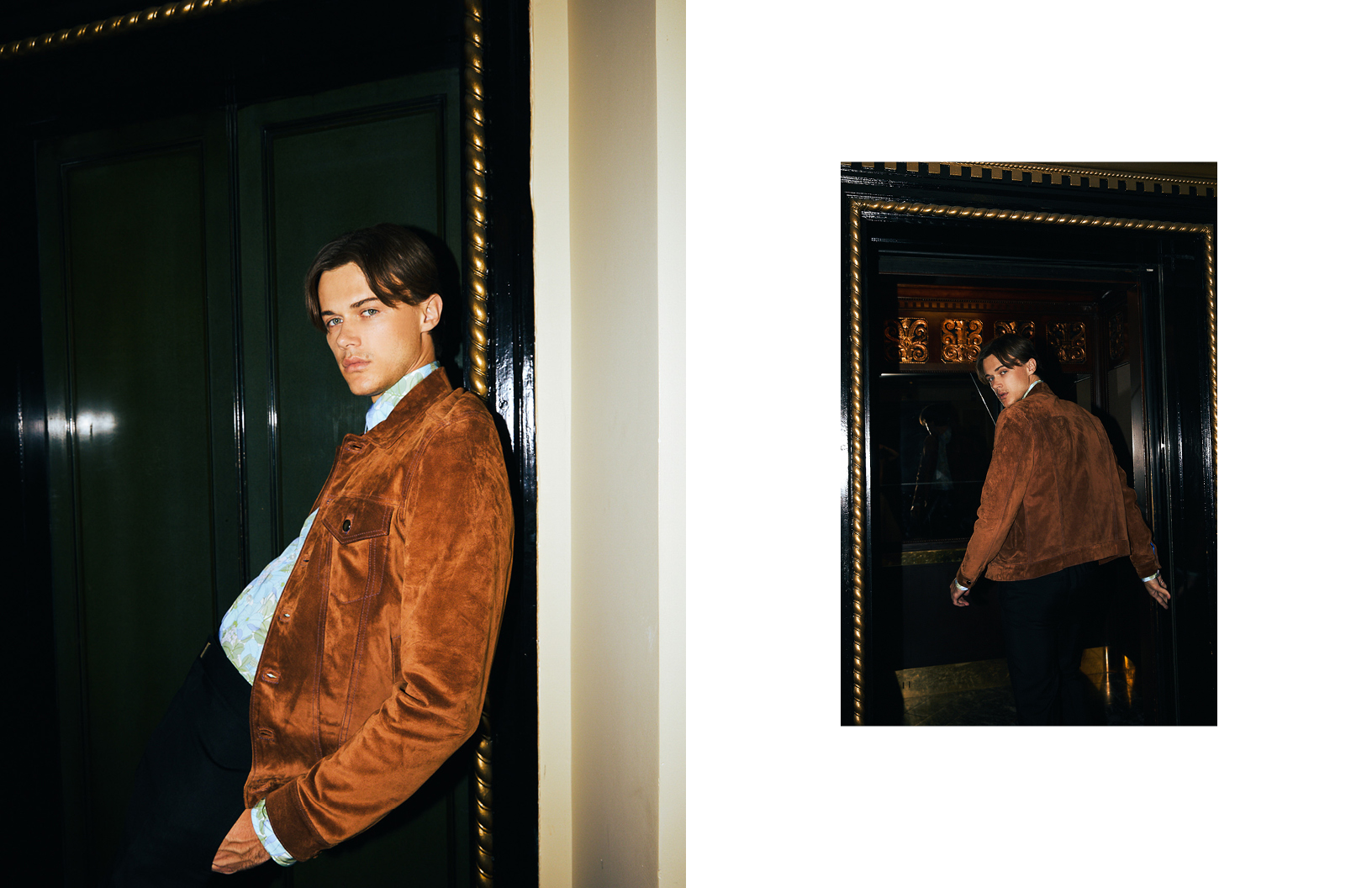 Is directing something that you want to do more of in the future?

That’s definitely something that I want to do. I directed a lot of short films in college and high school with friends. Directing is something, like acting, that excites me in ways other interests or hobbies don’t. I get really excited at the thought of making a movie.

What kinds of projects interest you?

Another good question. I think it depends. I want to make things that I like. I had this idea of doing my version of Noah Baumbach’s Kicking and Screaming. Kids coming out of college, not knowing what the fuck they’re doing. I appreciate movies that broach the fact that nobody knows what they’re doing. We’re all just sort of figuring it out.

They’re comforting, in a way.

You should do it.

I will. I really will.

You also have a past in theatre. Is that something you see yourself eventually returning to?

I would love to. I think that’s where I started to discover my love for acting. It was in high school and we were doing high school theatre. I’m sure it was shitty. I didn’t have a concept of process or acting. I was up there saying words in funny voices. I think a lot of people fall for it because of the joy of it. I think, as I’ve learned more about acting and learned more about what I appreciate about acting, I am consistently drawn to the idea of doing theatre because it’s so pure and process driven and historical.

That’s what I’ve heard from a lot of actors who’ve done both. They all say there’s something special about theatre that you just can’t get on film.

Yeah. There’s just magic to it. But, I will say, there’s magic to film as well. They’re different entities

Obviously, I would be remiss if I did not bring up The Summer I Turned Pretty. My friend and I binged it in a day. It wasn’t intentional, but once we started, we couldn’t stop. What about season 2 are you most looking forward to?

I feel like the upcoming season is deeper and more well-rounded. It explores more complex tones than the first season could. I can’t tell you anything else I’ll get in big trouble.

[both laugh] I know how it is, don’t worry. Lastly, to bring everything back to Daliland, The film is primarily set in the 70s. If you could go back to that decade for a day what would you do?

Man. I would buy a bunch of clothes and put them in a time capsule. I’d vacuum seal them and bury them where only I could find them. Actually, maybe I’d just bet on sports teams to win. Maybe I’d do a Back To The Future. No. I’m going to stick with the clothes.

Did you keep any of the clothes from Daliland?

[sighs] I wasn’t allowed to. I  wish I could have. They were all rented because the budget was so low, so they had to give them all back.

Ah, bummer. The clothes are so good.

I still remember what it felt like to put on some of those clothes. 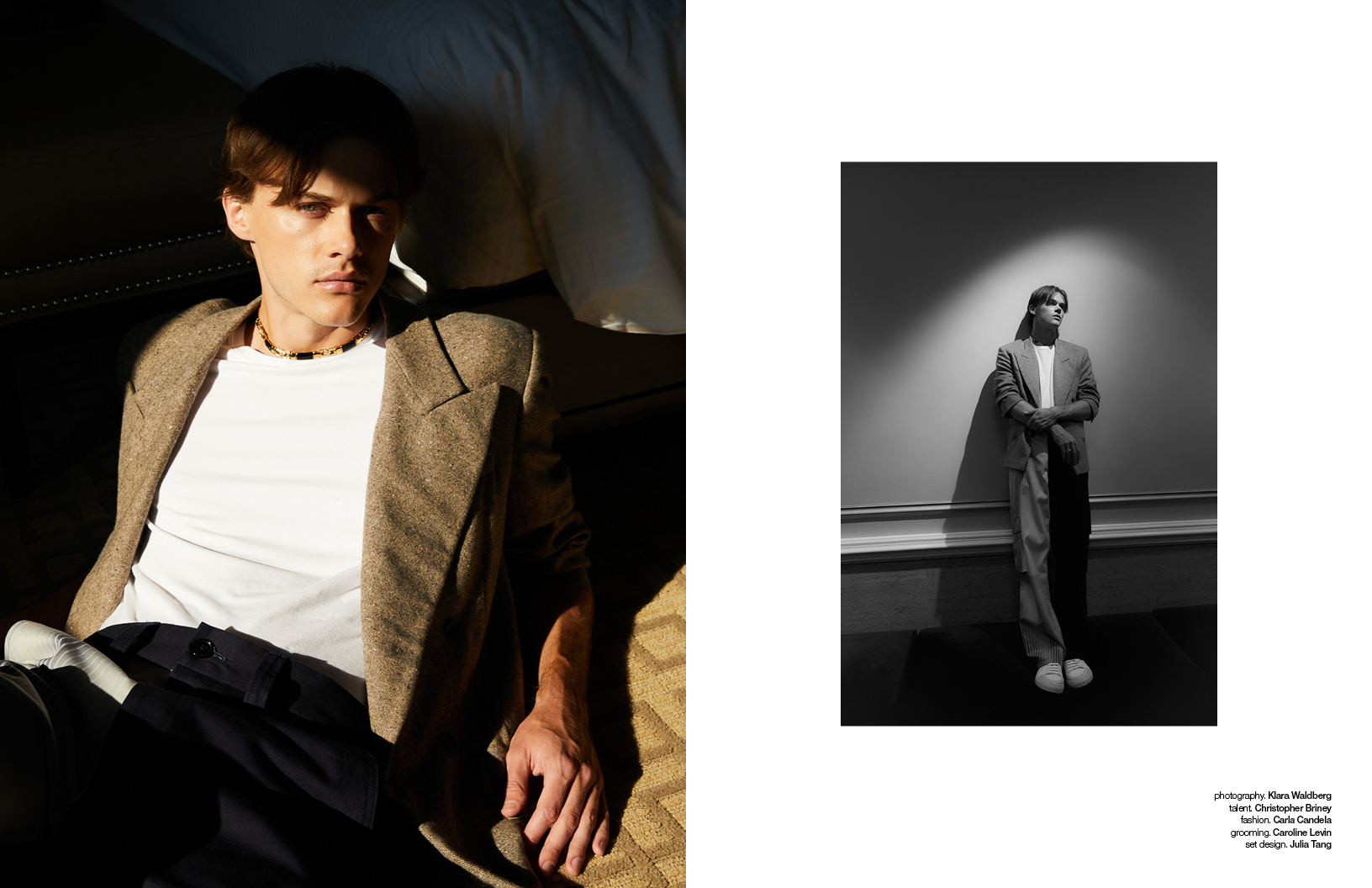 Dalíland will be out soon. The Summer I Turned Pretty is streaming now on Amazon Prime Video.