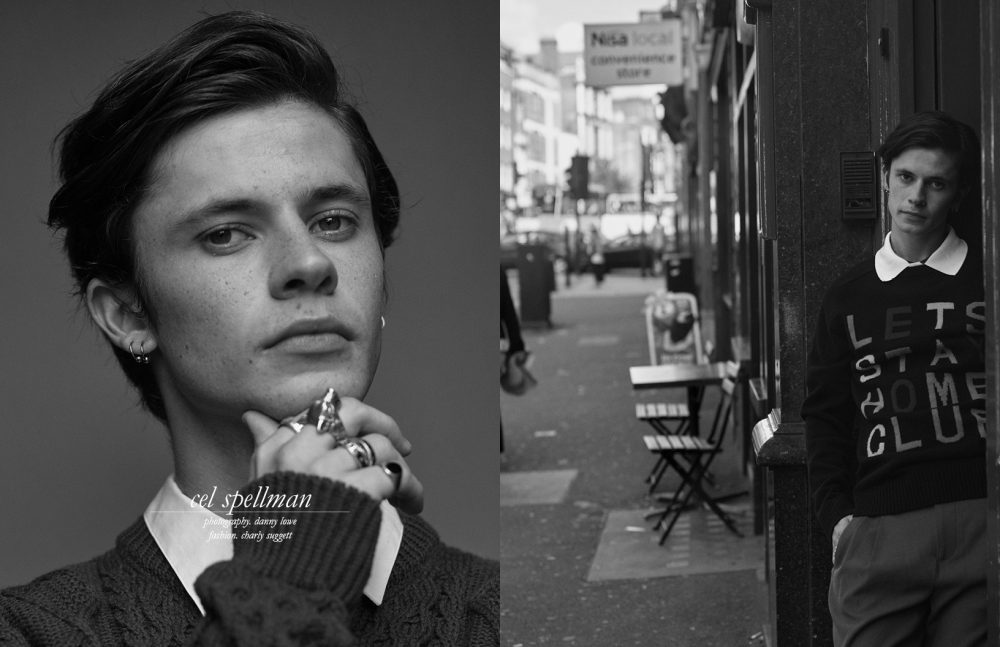 Upon hearing Cel Spellman’s bright, animated tone on the phone, ‘charisma’ is the only word that springs to mind. With a voice like his, it’s perhaps unsurprising that the young Mancunian has charmed his way onto a coveted slot on Radio 1. His considerable talent plays an even larger role in his precocious success and is manifested in countless acting and presenting gigs. His voice might be at home on the radio but his face is also worthy of the screen, with the 22-year-old being featured on television sets up and down the UK in his role as Mark on the 2017 reboot of classic sitcom Cold Feet. A jack-of-all-trades who grasps every new opportunity with both hands, he approaches his work with determination and zeal. However, he could never be said to embody style over substance. Spellman also happens to deeply involved with charity work and activism and is currently working on projects with the NHS, WWF and UNICEF. Despite a jam-packed schedule, the actor and DJ sat down with Schön! to discuss his recent theatrical project Talk Radio and the beginnings of the show-business storm that is his career (in a teacup).

When did you first decide that you wanted to be a performer?

I have always loved drama since I can remember — literally from when I was a toddler. My first professional role was [playing] Chip, the little teacup in Beauty and the Beast, at the Palace in Manchester. It was a touring musical and they had open auditions. I kind of just went along for the experience because I did love performing so much, maybe not singing and dancing, but I was lucky enough to get the role. Since then I’ve never looked back. It’s all I’ve known and I wouldn’t be able to say a particular time when the passion and love for performing began because it’s all I can remember. My mum always did say that if you love what you do then you’ll never work a day in your life and that’s very much been the case for me. I feel very lucky and very privileged that I found [a vocation in performance] so young. 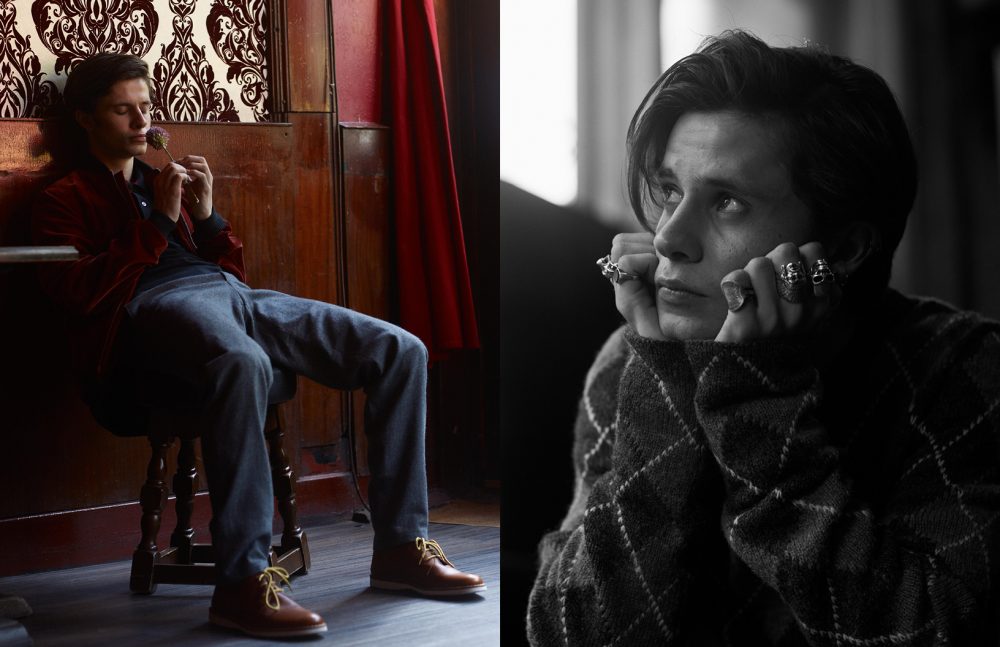 You attended the prestigious Sylvia Young Theatre School which has produced stars like Billie Piper and Amy Winehouse, how did this impact on your development as a performer?

It only had a very positive impact on me and my career, I can safely say I would not have been able to do all the stuff I did in secondary school without Sylvia Young Theatre School. They really do support and encourage you to work professionally, as long as you can keep up to speed with your school studies. If I had been anywhere else it would have been hard to balance the two. You’re given the chance to be acting and singing and dancing for two days a week for five years, there’s nowhere else that can give you that. In terms of the acting, there are things I have taken from that which I can take with me for my entire career. I have so much to thank the school for but also Sylvia herself because she is truly such a remarkable, inspiring person who I have been lucky to meet.

As someone who started out in theatre productions but has since crossed over into television, presenting and radio work, you are a particularly multifaceted performer. In what ways do your various projects influence and enrich one another?

Thank you, that’s very kind of you to say. I wouldn’t necessarily say that they influence each other but they definitely enrich each other. There are so many things I take from acting that I can put into practice in my presenting. Likewise, things I learn from my presenting which I can use in my acting. For example, I played Adam in Cucumber who tries his hand at vlogging. So, having a bit of experience presenting I could use that for playing that character. I’m so lucky that I can take different experiences from each field and bring it into the other. 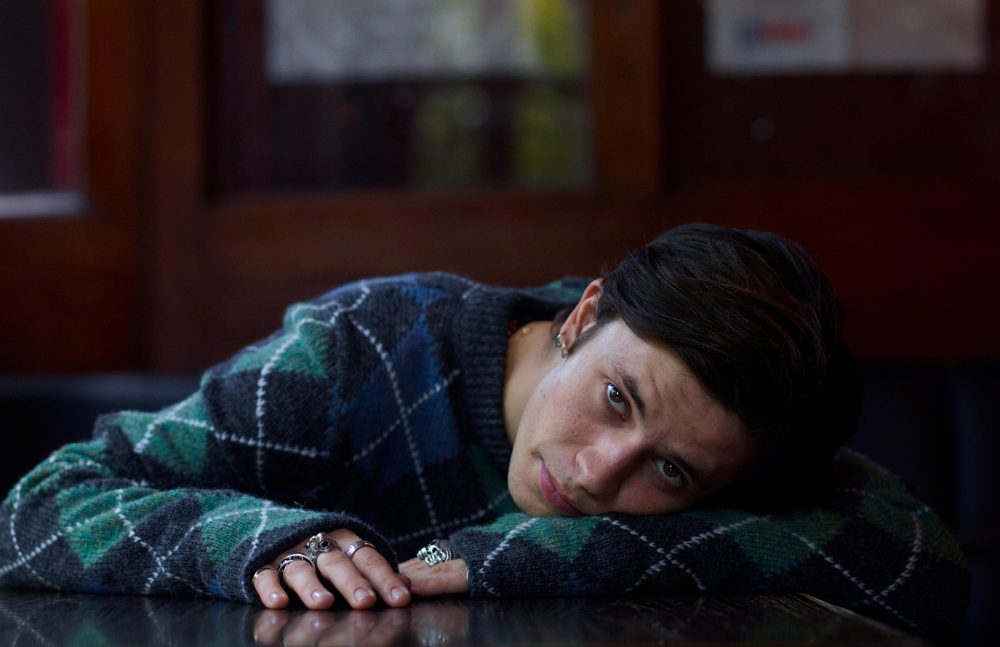 You’ve been performing professionally in a range of roles for the past fourteen years, if you weren’t in show business what would you be doing now?

I can honestly say I have got no idea what I would be doing. I love football and I played a lot of football when I was a kid so the young lad in me, his dream would have been being a professional footballer. Maybe something to do with charity work; whether that is looking after the planet or after people. Maybe [a career in] wildlife…I’m a big wildlife lover and conservation and caring for wild animals is top of my list.

In 2015 you appeared in the acclaimed Channel 4 drama Cucumber about the passions and pitfalls of 21st century gay life. In what ways do you think that television is becoming more liberal and representative?

I feel that television is always quite liberal. The writer of Cucumber wrote Queer as Folk, which was really ahead of its time for anything that was on television at that time. I think the biggest thing with this medium is that it’s always pushing the boundaries of being more liberal and representative. One of the biggest changes we are experiencing is streaming. There are so many constraints that you have to stay within when working for a channel. I think with streaming the shackles are kind of off. I think change is definitely happening with diversity being shown across all platforms but I feel like there is still a lot of work to do yet. 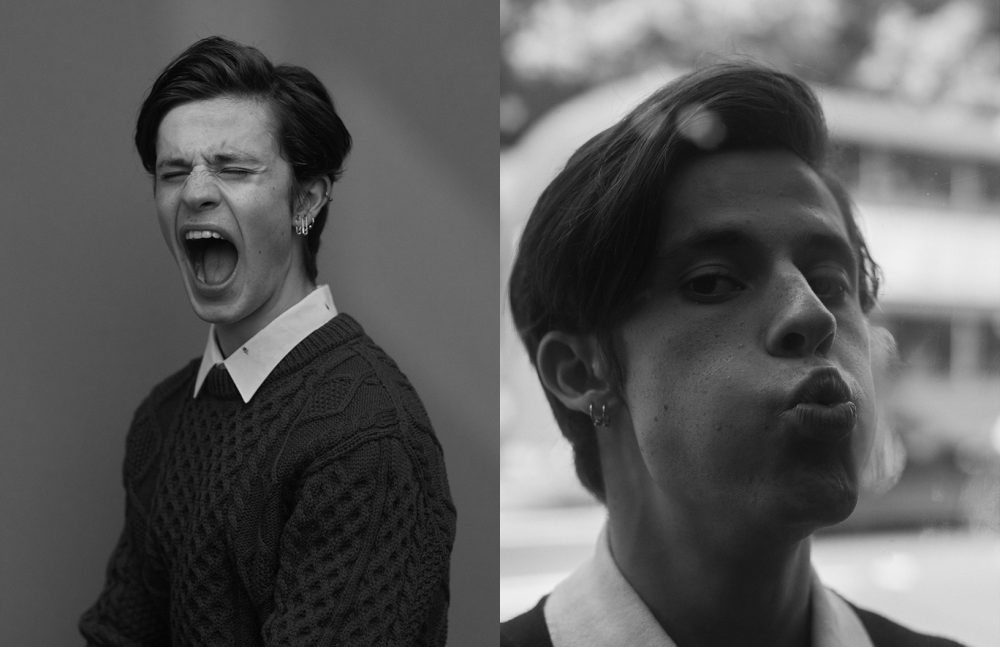 Renowned for its sensitive treatment of real-life social issues, the iconic ITV comedy-drama Cold Feet returned to screens in 2016 with you joining the main cast. In what ways do you think that television can change public perceptions?

I think television can change people’s perception in a lot of ways, opening people up to a world or a character they’ve not come across. At the same time, it’s important to bear in mind that we are working in a time of consumerism and people are using what they’re consuming to form the basis [of their thought]. I think that’s why it’s important that what is shown on TV is current and fair, to give people the chance to formulate an unbiased opinion.

In Cold Feet you play Matthew, the teenage son of long-running character Adam. What attracted you to this character?

Well, I think the first thing is the massive attraction of being given the opportunity to join such a prestigious British television series — it is any young actor’s dream. [Also] I remember auditioning for the role and reading the first episode and it was so refreshing to read a script for a young person that had substance, that had weight and that was tangible. 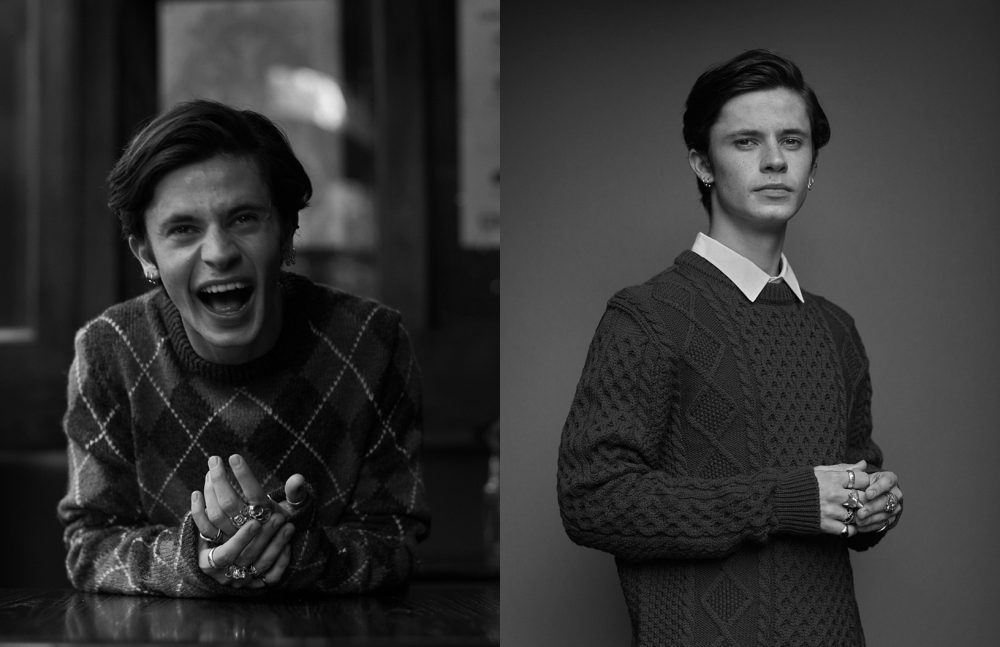 As a new cast member in a series, which last aired thirteen years prior, how did you approach your role in Cold Feet?

I think preparation is vital in any role that I play. Making the character, reading the scripts, finding what journey Matt was on and where I want to take him. Terry, the director, was great to talk with. From there, [I was] set up and ready to put into practice on set. Those five main cast [characters] are some of the best in the business, but they made it so welcoming.

Apart from all the acting going on, you also present the CBBC Official Chart Show slot on BBC Radio 1, what first got you interested in radio?

I’ve always been interested in radio — it’s always been on in the car and in the background at home. But to be honest I’d never really thought about getting into it too much, I kind of fell into it. I presented a CBBC show called Friday Download and we were promoting a teen award that had been made alongside the show so I popped on the radio a few times to promote it and then I was given the chance to try out how I sounded in a radio studio trying to present a show. I did a couple of reps where I was covering for someone… Then, kind of randomly out of the blue I was given the opportunity to have my own show on a Sunday and I took it with both hands. From there I learned how to drive the decks and I found a new appreciation for radio. It’s a medium I thoroughly enjoy and which I thoroughly enjoy learning. I’m excited to see where the next few years go to.

While you’re already involved with radio in real life, you’ve just wrapped upr currently performing in the play Talk Radio, about a radio presenter in ‘80s America. How do you think radio has changed as a medium over the past few decades?

I don’t think radio has necessarily changed, no this is one of those mediums that really has stood the test of time and people are always going to be listening to radio. I think what’s changed though, especially when you’re looking at when Talk Radio is set, radio was a massive part of people’s lives. There weren’t really many TV sets going about; there were no computers or internet or laptops so radio was all people had to listen to as a form of entertainment. Whereas now, radio has had to adapt to compete with online and TV and streaming services. 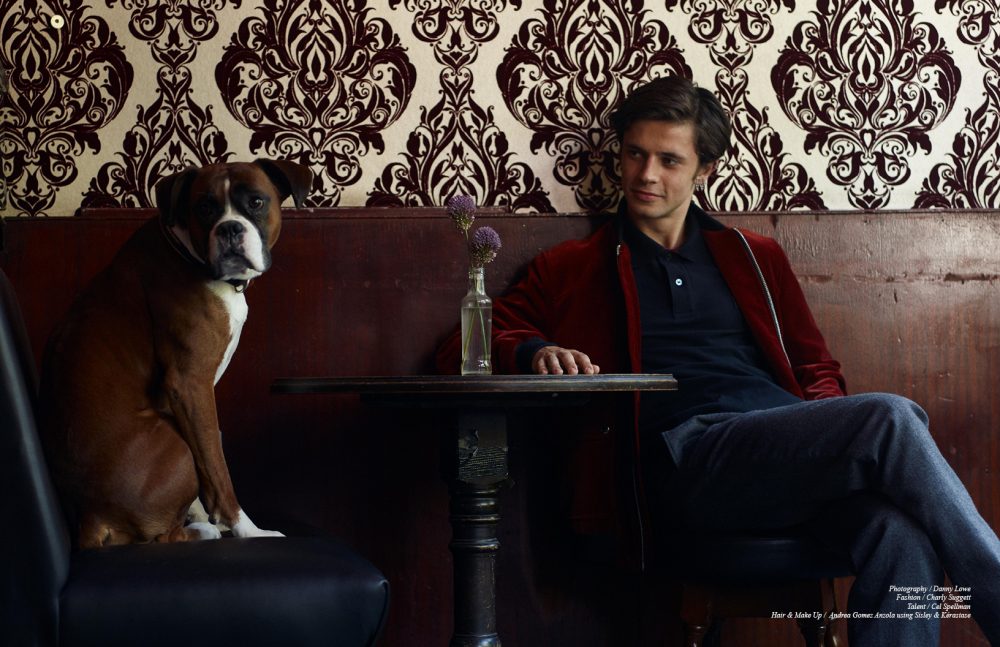 Talk Radio is concerned with how media can encourage right-wing ideology, and raises concerns about press freedom. How does the play, first staged in 1987, dialogue with the current political climate?

It’s actually one of my favourite things about Talk Radio that you’re touching on here. It was written thirty years ago by Eric Bogosian, we put it out in 2017 and it’s still scarily relevant. Not just what’s going on politically, but climate change and where people’s minds are at and what they are thinking and talking about.

You are an ambassador for charities like WWF and UNICEF, why did you want to get involved with charity work?

I’ve always wanted to try and help people and the planet and its animals and also wanted to always be talking about things I believe in and think are important and think people should be talking about. I’m very lucky to have a small platform where a couple of people follow me and might listen to me. If you’re in this game and you have the privilege to put something out and people might see or listen to it, then you should really use that for a force of good.

Your plate is already quite full but what are your plans for the rest of 2017?

Well, I just finish this play Talk Radio; we’ve also got Cold Feet on TV for the next couple of months or so. On the other side of that, I’m actually recording a podcast series with the NHS, which looks at issues that affect young people. Also, there are some campaigns coming up with WWF and UNICEF, which I am really proud to be involved with. As well as that it’s back to the auditions, and a few things which are now just in the offing. It’s really just seeing what we can work at and what would be the right thing to do.