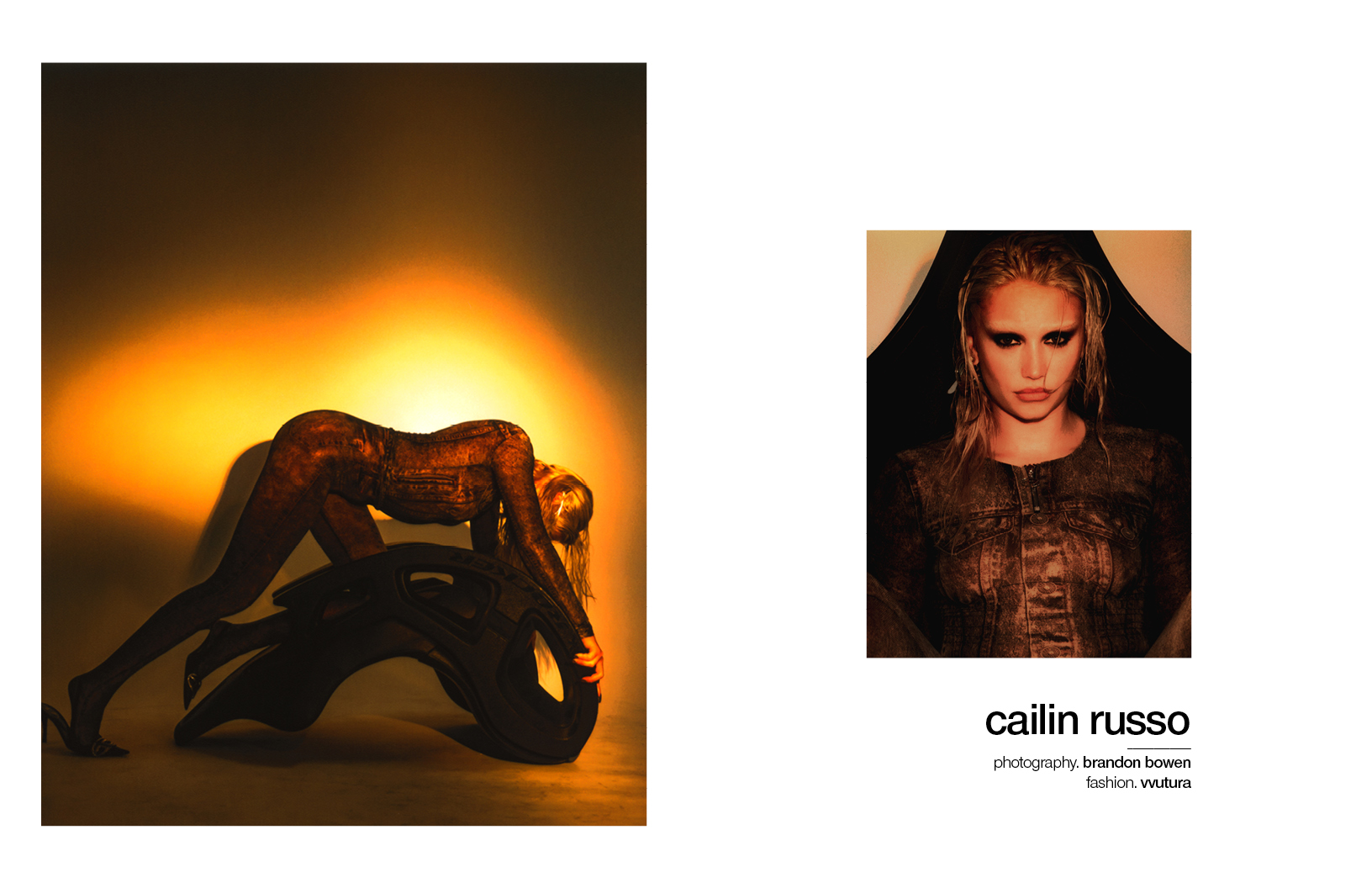 Cailin Russo is not your average artist. Her name may already ring a bell from her stint starring in some of Justin Bieber’s Journals era music videos or her contribution to Kanye West’s album Donda. Despite her brush with different genres, the model-turned-singer stays true to her futuristic, grunge inspired punk-pop sound in her latest single Die Down. Schön! caught up with the songstress days after her single dropped to chat about all things creative discovery, the transition from modelling to singing and so much more.

Can you describe the set of emotions someone goes through when they release a song?

It’s a pretty euphoric sensation. It’s like releasing, I don’t want to say a baby because it’s not as extreme as a baby, but it is. It’s releasing some kind of energetic attachment to you which I feel like can only be described as a baby, or I don’t know, when you finally get over your ex and you’re just relieved. You have a weight off your shoulders, a creative knowing that you listened to God and made this body of work and now you can release it.

What was the creative intention behind Die Down?

I was working with my cousin in his basement. He is a really interesting, very trippy person and he made this super eerie beat. We all were micro-dosing on mushrooms or something. I’m not sure, but we were in his basement with a couple of his friends and we were just freestyling and working on some [FKA] Twigs-y, Grimes sounding music. He kept pushing me to use my falsetto. When I was freestyling on the microphone the chorus popped out. It actually started off in this grimmer setting of someone being too high at a party and then it transcended into something that was much more romantic and ethereal of an experience.

Since you grew up in a musical household, is making music something you always aspired to do?

I don’t think consciously. When it came down to making music and singing and doing all of this more theatrical stuff, even though I was always into everything, I was very shy. I didn’t start putting myself out there until I was about 16 but growing up I was very inspired by poetry. I was in orchestra for a year. I played the cello. Everyone around me was super encouraging in terms of art in my house. When I finally got the courage to talk to my dad and ask him to work with me, he was enthralled. He was so happy and ecstatic. He always wanted me to learn but I think he wanted me to do it on my own. 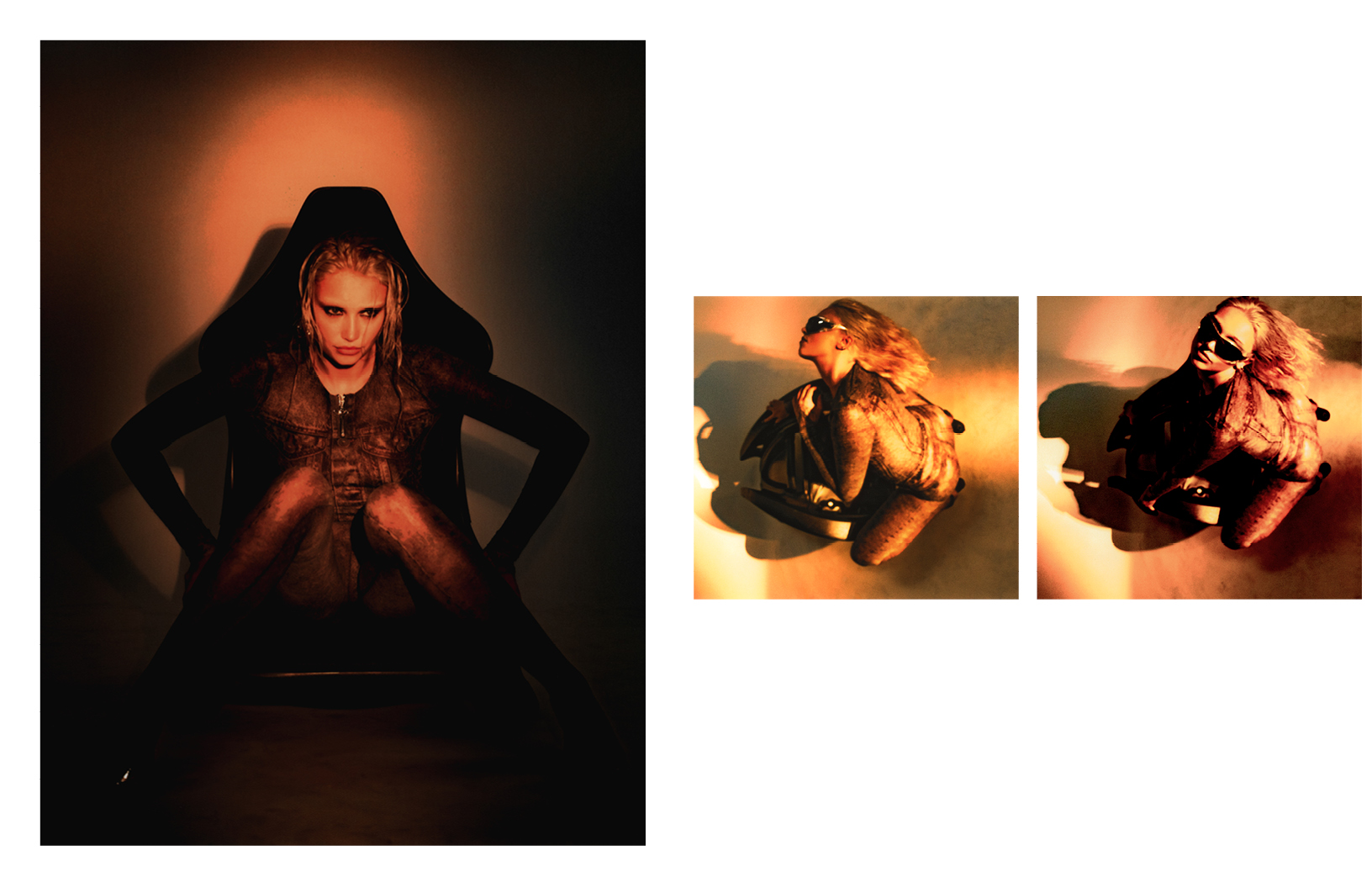 What was your entry point into music?

I had one conversation with my partner at the time and he was like ‘you have to decide what you want to do.’ I called all my modelling agencies and dropped them. I was like ‘you need to take me off the website. I’m fully committing to music.’

How did modelling prepare you for your career in music?

I think it more so put me in a position to really be free. I didn’t have to go to a regular job and I didn’t have to fit into any social norms. Working in music, fashion or beauty is so based on energy. It’s obviously extremely superficial but there are a lot of models, especially now, who are [there] just based off their pure energy. I think when I was modelling I could really capitalise and I felt really seen for being a beautiful person and not [just] an outwardly beautiful person. Modelling was great for my confidence. People liked my style which I thought was really interesting and cool.

What is something you struggle with creatively – both in music and in the modelling industry?

When you are constantly switching up your image you lose a sense of you. You can wear a bunch of different hats and pull them off really well but it’s hard to distinguish what is your actual aesthetic once you’re not modelling. My creative director, Rose, she’s been super helpful because I couldn’t make decisions with my creative visually after all that. I was just so overstimulated by all these different versions of me.

What are the similarities or differences between the creative process that goes behind your work as a model vs. singer-songwriter?

In any creative space, you have to drop into a flow state.You can’t force the song to be written. You have to be a vessel and prepared to write it. It’s the same with modelling. You can’t force yourself to be fierce. It has to be innate. Both can be practiced. 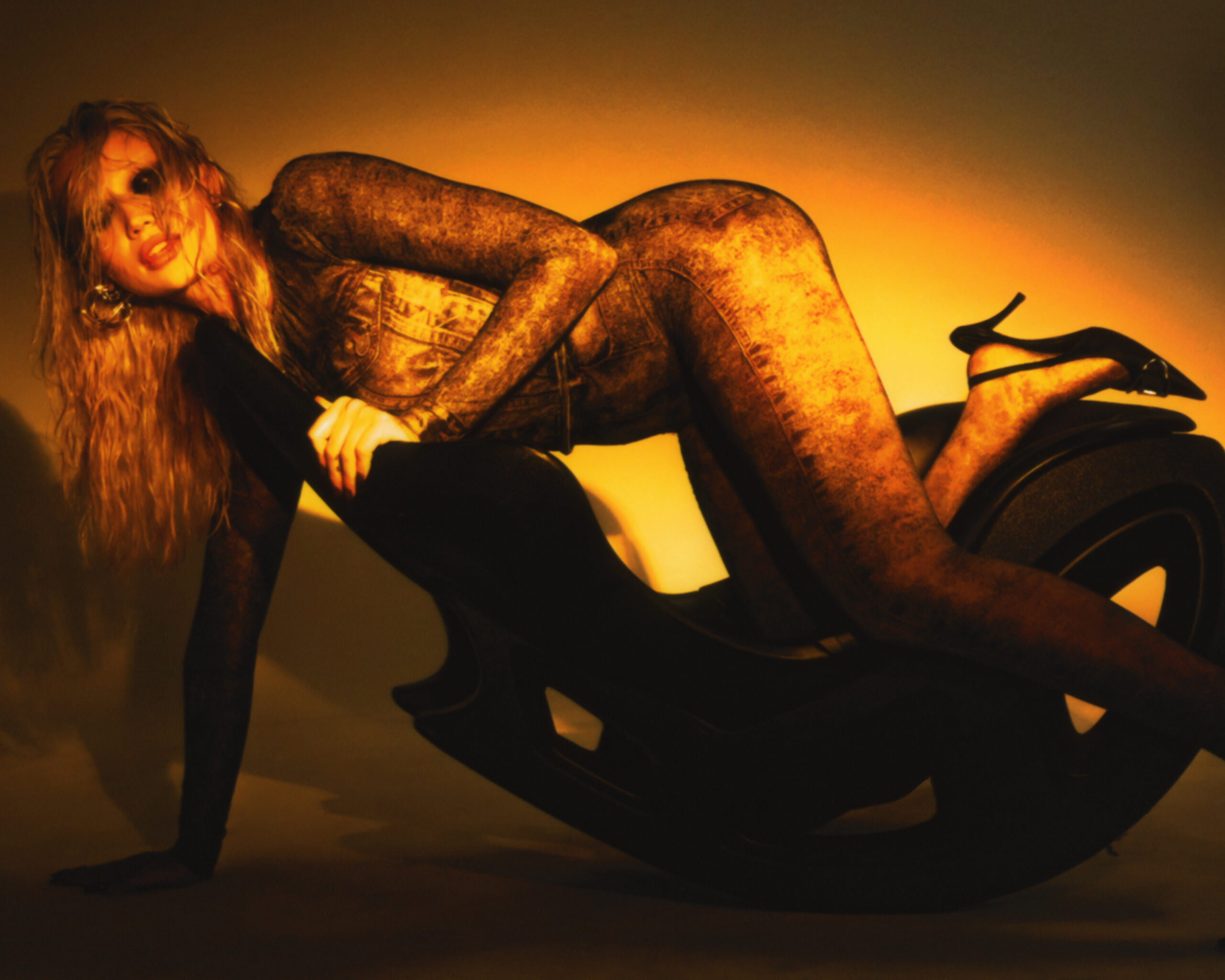 Who are some artists that have inspired your sound?

For now, I’m really into alternative music. I’ve been listening to a lot of Dean Blunt, Kesey Lu, and yes, Summer Walker and Daniel Caesar. That’s really what bag I’ve been in, and just trying to create more stories that are from really personal experiences. Lauryn Hill has always been an icon for me, but I obviously went with a super electronic turn for now, but that’s just how it had to be. I’m definitely moving more into earth sounds.

You have been in very close proximity to some of the most influential people in the creative industry like Justin Bieber and Ye. What was working with some of the biggest names in music like?

It’s actually quite intense and scary for someone that doesn’t feel as established as a lot of people that are in the room. But if you are in the room, there’s a reason. That’s something that I had to remind myself of a lot. It’s very trippy to me that I’ve been in Bieber videos and worked with Kanye as a songwriter but both were very affirming for my life path at the time. I’m carving my own path and breaking limitations. [Going from] a video vixen to a songwriter on Kanye West album is very extreme.

In your opinion, what is the most valuable aspect of working with musical these accolades?

After going through both of those experiences, the whole reason I was in both of those rooms was because I was 100% authentically myself. Always be open to any possibility and [don’t] limit yourself because it’s only setting you back from whatever you’re yearning for. Those are my biggest takeaways. 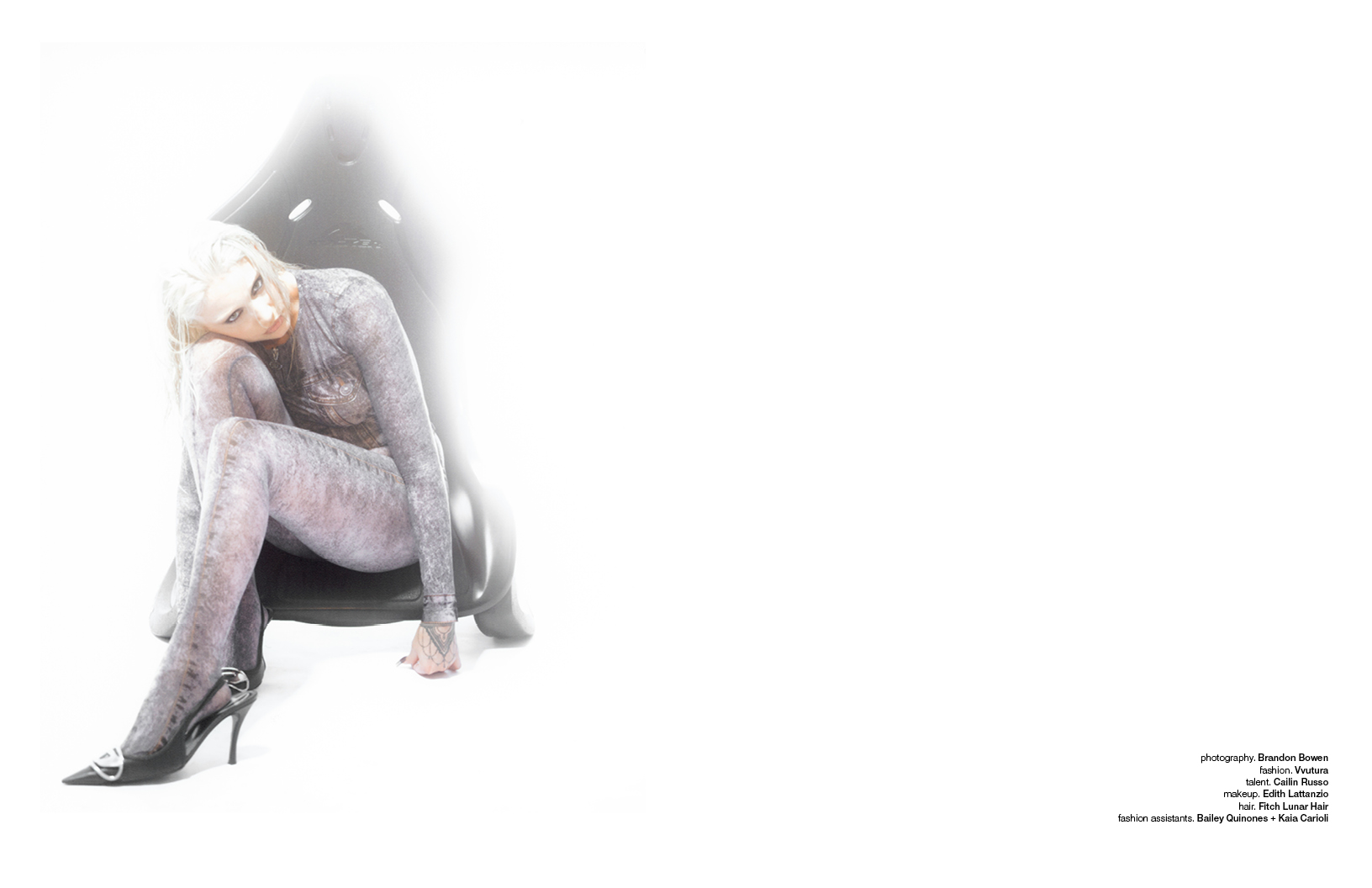 What are some of your upcoming creative goals?

Drop the album, get to 10,000 subscriptions on Youtube, go on a world tour and play some festivals. I love performing live and I really feel so transformed whenever I get to do that. I’d love to play Outside Lands. It’s my favourite festival but I’d love to also play a festival in Asia, Europe or Africa.

Without giving too much away, is there anything more that you can tell us about your album?

I can say that it is a full journey from top to bottom. It’s a very foundational album for me. It will really put myself into a position that I’ve always wanted in terms of being respected in music. Now, I feel like I’m stepping in very authentically and I think that’ll be received well, hopefully. I hit all of the marks for all the different genres that I’m into.

How do you want to be remembered in the industry?

Oh, man. “I think that she was a trailblazer.”

How do you want your fans or the people that listen to your music to remember you?

As a version of them.

Cailin Russo’s latest single ‘Die Down’ is out now.