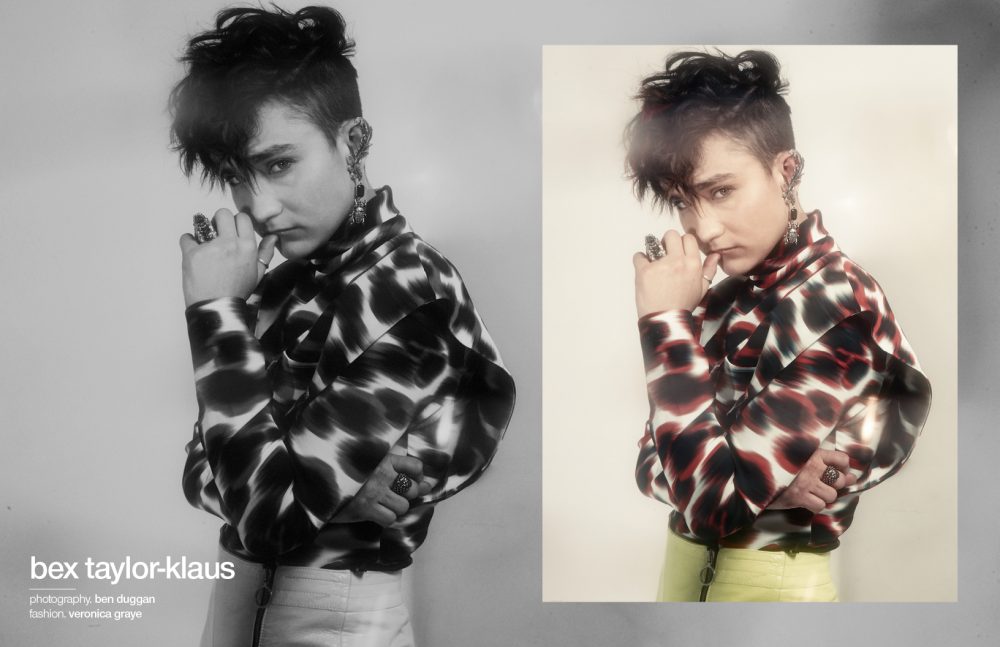 Bex Taylor-Klaus is the role model Hollywood not only needs but yearns for. Hailing from Atlanta, the 24-year-old actor’s contagiously positive attitude is earnestly refreshing. But they are not afraid to keep things real either (just have a quick browse at their social media). Having moved to LA to pursue acting at only 18, Taylor-Klaus landed their formative and first break out role as Bullet in AMC’s The Killing shortly thereafter. Since then, they have presented us with immaculate acting that spans TV, film and, of course, animation.

As the voice of Pidge in Voltron: Legendary Defender, the highly acclaimed reboot of the iconic ’80s series, they have helped reshape cartoon history. The series, which premiered in 2016 on Netflix, will come to its bittersweet ending with its upcoming eight season. But fear not, with a few top-tier projects on the pipeline, we’ll be sure seeing plenty from Taylor-Klaus in the future (and if any Hollywood execs for The Gifted out there are looking for the perfect actor to play “Magneto’s bastard queer son,” they are it).

For now, though, Taylor-Klaus’ latest project, Dumplin’, sees them acting alongside Jennifer Anniston and Danielle Macdonald in the film adaptation of Julie Murphy’s beloved novel. Dumplin’ is a recount of self-love and its exclusive soundtrack is provided by none other than the iconic Dolly Parton. With the film premiering on Netflix today, we catch up with the enigmatic actor to discuss why their Dumplin’ character Hannah is “a tough cookie with a gooey centre”, dealing with dysphoria and mental illness, being a fierce LGTBQ+ advocate and what the future holds for the trailblazing go-getter.

Dumplin’ makes its way to Netflix today… What do you like most about the message behind the story?

What’s not to like? Self-love, female empowerment, the importance of friendship, and family love!? Actually, I might have to say my favourite part of the message behind Dumplin’ is that drag queens are ethereal and should be loved and revered.

That’s certainly a great message. How was it working on a musical comedy? Will we see your singing chops on screen?

Every day feels like living in a musical comedy with Maddie Baillio around. I can’t wait for you all to hear her sing in this! As for my singing — unfortunately, Hannah can’t carry a tune to save her life. You might see some lip-syncing skills but no singing this time, sorry! 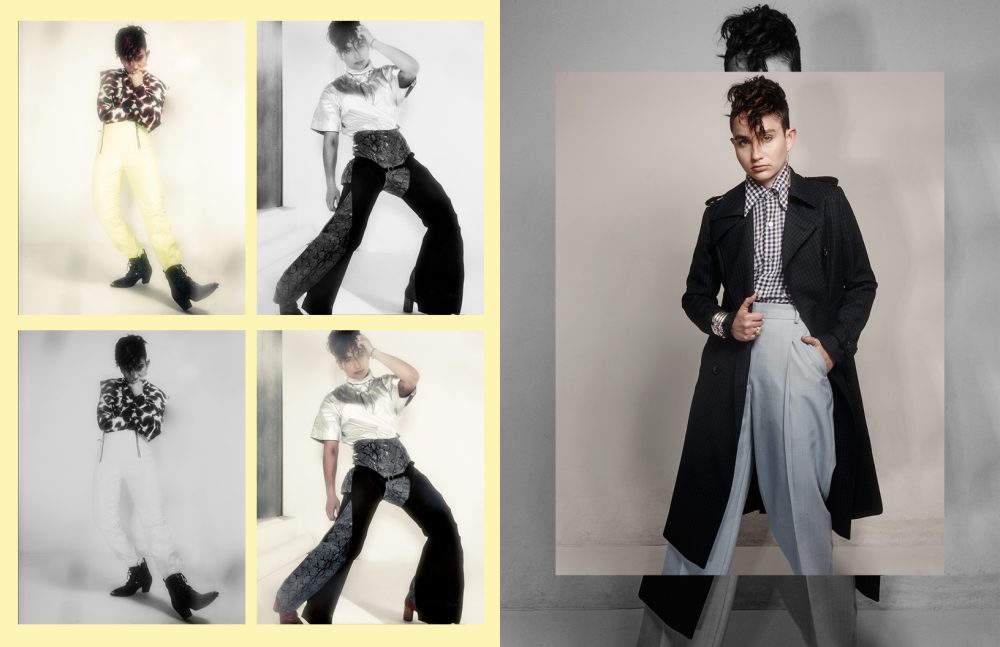 That’s a shame! Is comedy in general something you’d like to explore further?

I love comedy, and I would definitely love to explore it further! I never want to stop doing new and exciting things. Comedy is a fun challenge and I love making people laugh more than anything, especially these days. We all need some comic relief.

What else can you tell us about your character Hannah? What did you identify most with her? Did you read the book in preparation?

Hannah is a tough cookie with a gooey centre. She loves to be the rebel and the nonconformist, but she’s got a soft heart that only the truly worthy people get to see. I suppose I identify most with her need to be the weirdest person in the room. I read the book and loved it! Julie Murphy is a wizard with words.

Looking back a bit at your résumé, your character in Hellfest was originally intended to be a cis hetero woman but, thanks to you, she was part of the LGTBQ+ community. In Dumplin’, Hannah is described as gay in the book. Will we see something different in your portrayal of the character?

Hannah’s as gay as the day is long, just like in the book. Why mess with perfection?

True! You just wrapped up filming Blackbird in London. How’s the experience been? Did you like the UK?

Blackbird was the kind of project that as an actor you pray to experience some day. I worked with the most seasoned professionals on a project that will make people think and feel deeply. I keep feeling like I’m living someone else’s life! I absolutely loved the UK and can’t wait till I can go back again. We were working so closely as a cast up there and bonded so intensely that I came home with a new family and a tattoo to show for it. Truly unforgettable. 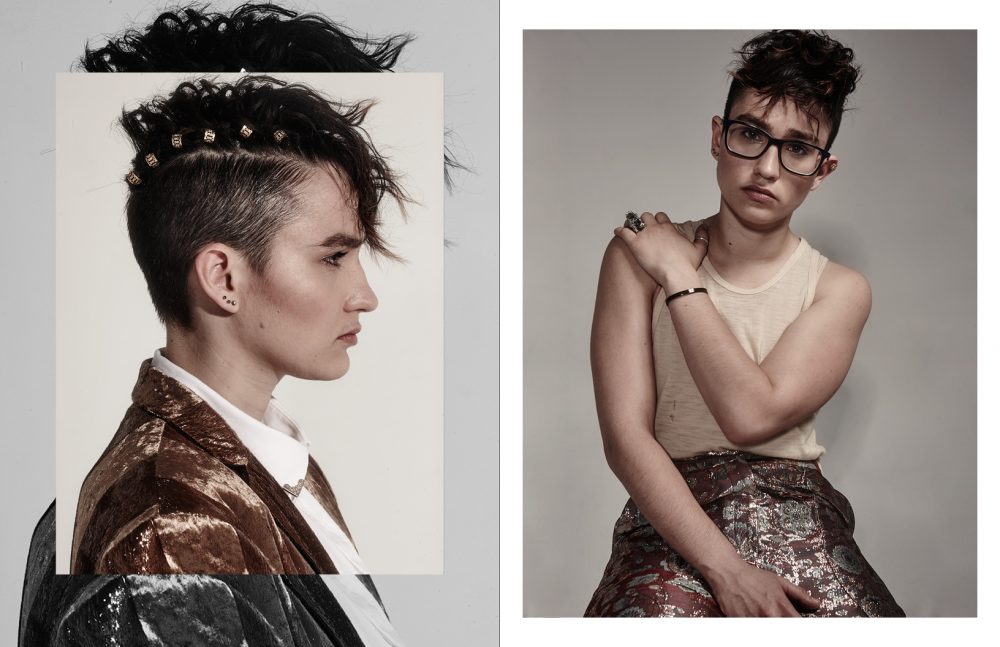 As you say, you act alongside some major actors in this film. What has been the main takeaway from working with this ensemble?

Oh my goodness, I think the biggest takeaway was don’t take yourself too seriously. This thing we do as actors? It’s play. It’s fun. It’s hard and terrifying sometimes, yes, but at the end of the day, we are just kids pretending to be actors living out other people’s lives.

What has been the best part of joining a production like this?

The memories and lasting friendships. Danielle, Maddie, Odeya, and Anne are my forever Dumplin’s and I will love them and cherish them till the day I die.

You made the jump to LA to pursue an acting career at 18. Six years later, do you feel like it was worth it (it obviously was, imo!)? What advice would you give to someone considering the same?

Dude, YES, it was worth it! I just had a conversation about this with my mom the other day. I definitely had some hardships coming out here so young and trying to navigate on my own, but those experiences made me the person I am today. I wouldn’t trade it. My advice for someone considering the same is to be very, very careful. Don’t do it till your skin is thick enough. You will be told over and over and over that you’re not good enough or that you need to change. Screw that. Be you.

You’ve had your fair share of horror recently. Are you especially drawn to this genre? Also, what other genres that you’ve yet to tap into are you keen on exploring?

I do love acting in horror films! I think what draws me to it is the sheer fun of it! Plus I’ve ALWAYS wanted to play a villain. I’m thinking Magneto’s bastard queer son needs to step up against Lorna on The Gifted… I love sci-fi and fantasy and would love to try my chops at those. 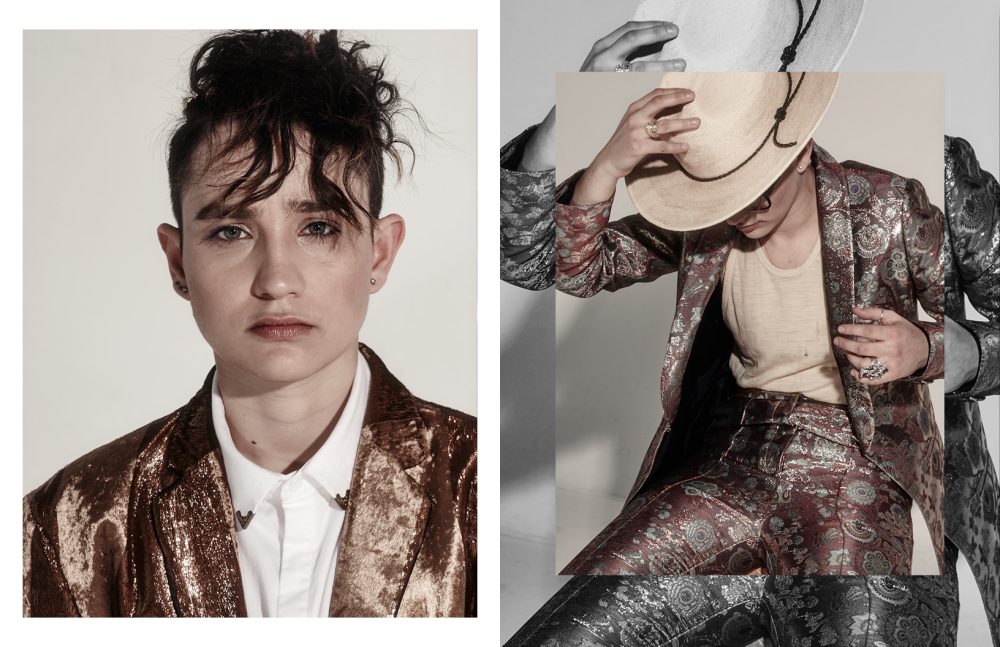 You do both live action and voice acting. Do you have a preference? What do you like most and least about each format?

I LOVE voice acting! I don’t want to ever have to choose between voice acting and live action. Definitely eager to try motion capture for sure, blending the two would be a dream come true.

You said in the past that “to be an actor is to want to visit the dark places that humans strive so hard to stay away from.” Looking back, what would you say those dark places have been for you and how have they helped shape you as an actor?

As actors, we dive into characters who struggle with homelessness, drug addiction, mental illness, physical ailments, abusive situations, and so much more. Some actors never recover, may they Rest In Peace. My personal dark places that I can draw from include mental illness, suicidality, heavy dysphoria, emotional abuse, and a quick stint with an eating disorder.

I trudge my way through each of them with a knowledge that I will be stronger on the other side. And I will make it to the other side. The power of acting is the ability to take in the surroundings as you’re trudging through the darkness. To remember and revisit the struggle when it’s time, and to put it back to bed when you’re done. I’ve been fortunate to have support systems available to help pull me out of the darkness when I can’t do it alone.

On a lighter note, what would you say has been your most formative role so far?

I might have to say Bullet on The Killing!

You’re a fervent LGBTQ+ and mental health advocate (and we appreciate you). Do you strive to be a role model?

I just want to leave this world a better place than when I found it. 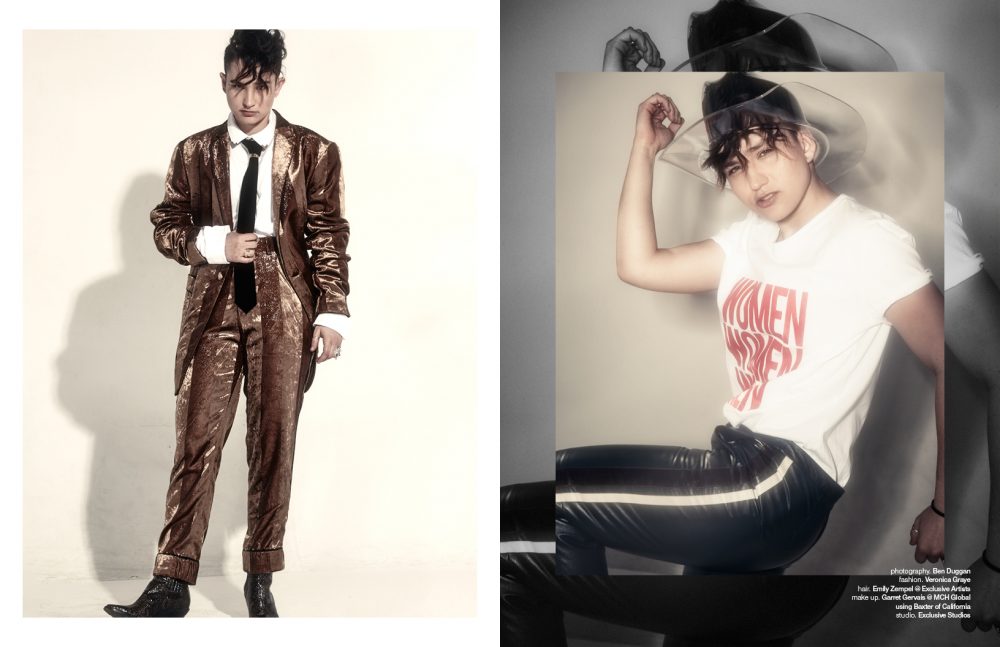 You came out as gay in 2016 and as trans non-binary in 2018 both through Twitter. If you don’t mind my asking, why did you feel your social media was the safe space to do it? And what advice do you have for people that want to come out but don’t feel like they have that safe space?

It felt important to document my life path in a way that kids who might also be struggling could access it easily. I suppose my advice would be that it’s always gonna be scary. You might have to do it over and over and over and over again individually with the people you care about most. Eventually, you’ll have enough people you know support you, that you’ll be confident and comfortable enough to take a bigger risk. My family and friends already knew! It was just time for the rest of the world to find out.

LGBTQ+ representation is slowly but surely getting better (this year’s Where We Are on TV GLAAD report is a testament to that). Do you feel hopeful for the future? What do you feel people outside the LGBTQ+ community can do to help out?

I do feel hopeful! Allies can smack down homophobic and transphobic views in their everyday lives when they encounter it. Your Uncle Steve keeps talking about “those dirty homos shoving it down our throats?” Talk to him. Stand up to him. Let the old way of thinking know that it will no longer be tolerated.

Word. Last but not least, what are you most excited about the future, personally or otherwise?

My life personally is better than it’s ever been and I’m really excited to see where it’s heading. I’ve got a person I care about deeply, a family I love unconditionally, a career I’m really taking control of and enjoying, and friends who enrich my life. Seriously. I can’t wait for 2019.