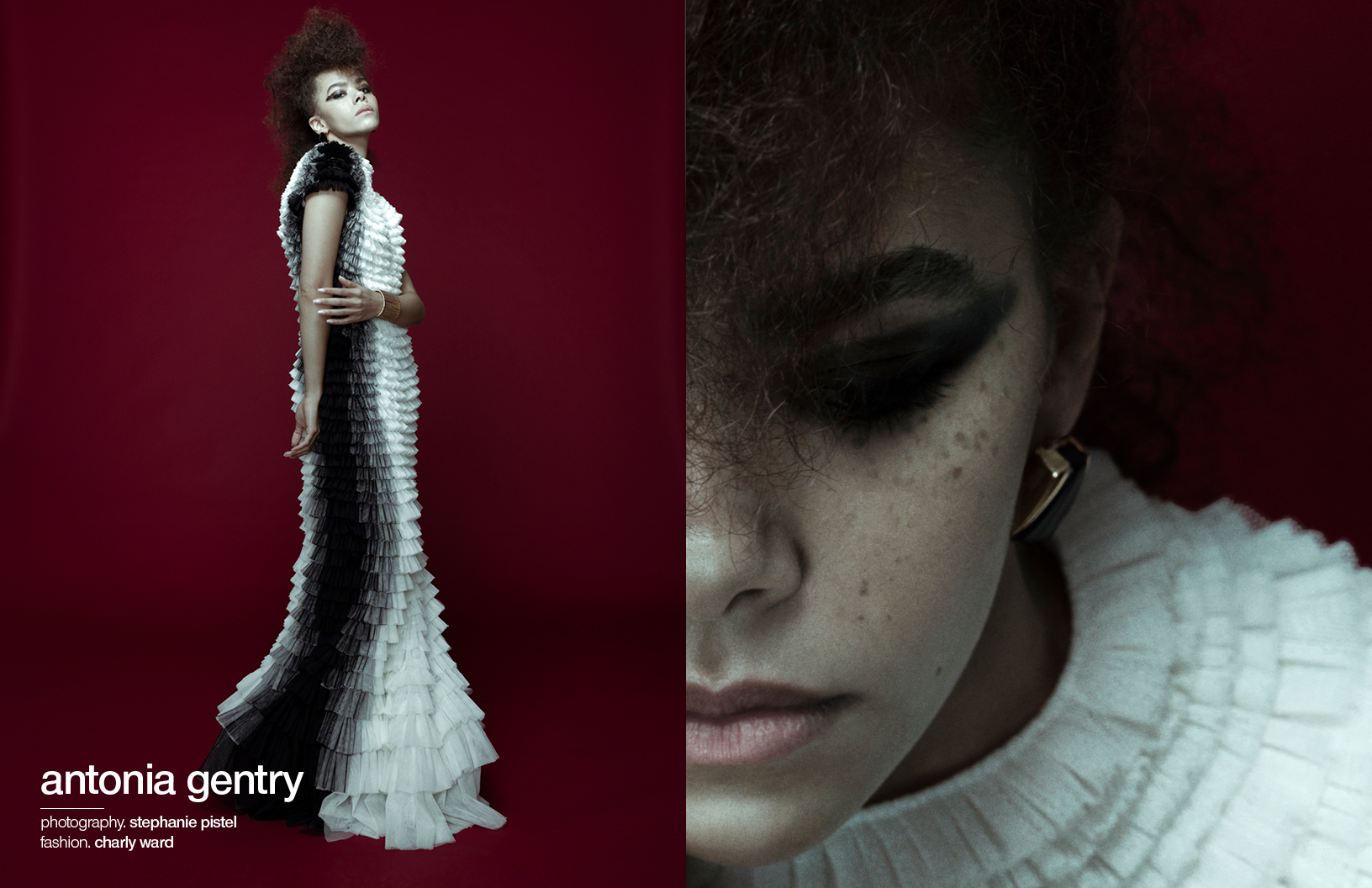 It’s been a whirlwind 2 years for Antonia Gentry. Prior to 2021, the now 25-year-old actress only had a handful of credits and hadn’t spent much time, if any, on a major set. Then came Ginny & Georgia and everything changed. Gentry portrays Ginny, one half of the show’s titular characters, and acts alongside Brianne Howey’s Georgia. In season 2, their turbulent mother-daughter dynamic shown at full force as Georgia’s secrets become too big to carry and Ginny is struggling to stay afloat. Gentry’s performance is equal parts poignant and powerful, capturing the depths of what Ginny is experiencing as she is at her lowest while also revelling in the moments where she finds small glimmers of hope while navigating her own darkness.

In conversation with Schön! Magazine, Antonia Gentry discusses the importance of exploring difficult topics on-screen, her favourite scenes from her time filming, and more.

It’s been a year since season 1 first aired and now season 2 is about to hit Netflix. Two weeks after graduating college, you first booked Ginny and Georgia. When you look back between then and now, how would you describe the way you’ve grown and developed as an actress?

A lot has happened since then! In season one I had three total days of set experience and then suddenly I was the lead of this new Netflix show. That was a learning curve, it was a lot to soak in at once. I had such a wonderful time working with such great people. I’m lucky enough to be a part of a cast of characters and creators that are just such wonderful minds. It didn’t feel scary as I thought it would be. Going into season two, there was the worry that so much time had passed and all of the challenges every single one of us had faced over the course of those two years. It was like, can we actually do this again? It was like riding a bike as soon as we got back to set on the first day. It felt like it was the beginning all over again. I was very lucky to have everyone there, safe and healthy, and for us to all work together again. It’s such a joy.

Your portrayal of Ginny this season is incredible. The first episode scene at Zion’s house where Ginny burns herself, episode four’s scene where she calls her therapist, the scene where Ginny has a panic attack for the first time, and the scene with Georgia finding out for the first time. Obviously, these are quite sensitive, heavy topics. When you read the script for this season, how did you grapple with these themes? What was it like to prepare for them?

I wasn’t looking forward to doing those scenes, but I knew how important it was. What I grasped onto for season two with Ginny’s arc is that she does seek help when she’s actively working on healing. I knew that during those scenes, so I felt like it was going to be worth it in the end because it is an incredibly hard journey. It wouldn’t make sense for us to include this part of her storyline in season one and then just completely abandon it or treat it like it’s something that won’t go away for her.

I think it was very important for us in season two to expand on the fact that she is dealing with so much and to help destigmatise conversations around mental health. Anytime I had to perform those scenes, it was very difficult but what kept me going was the fact that I know there are going to be people in our audience who really do connect with it and can see themselves. I trusted the fact that, since we work alongside Mental Health America, we were doing it in a responsible way as hard as those scenes are to watch. It didn’t feel like we were over sensationalising it or glorifying such difficult experiences around mental health, depression, and self-harm. It was hard but I knew how important it was. 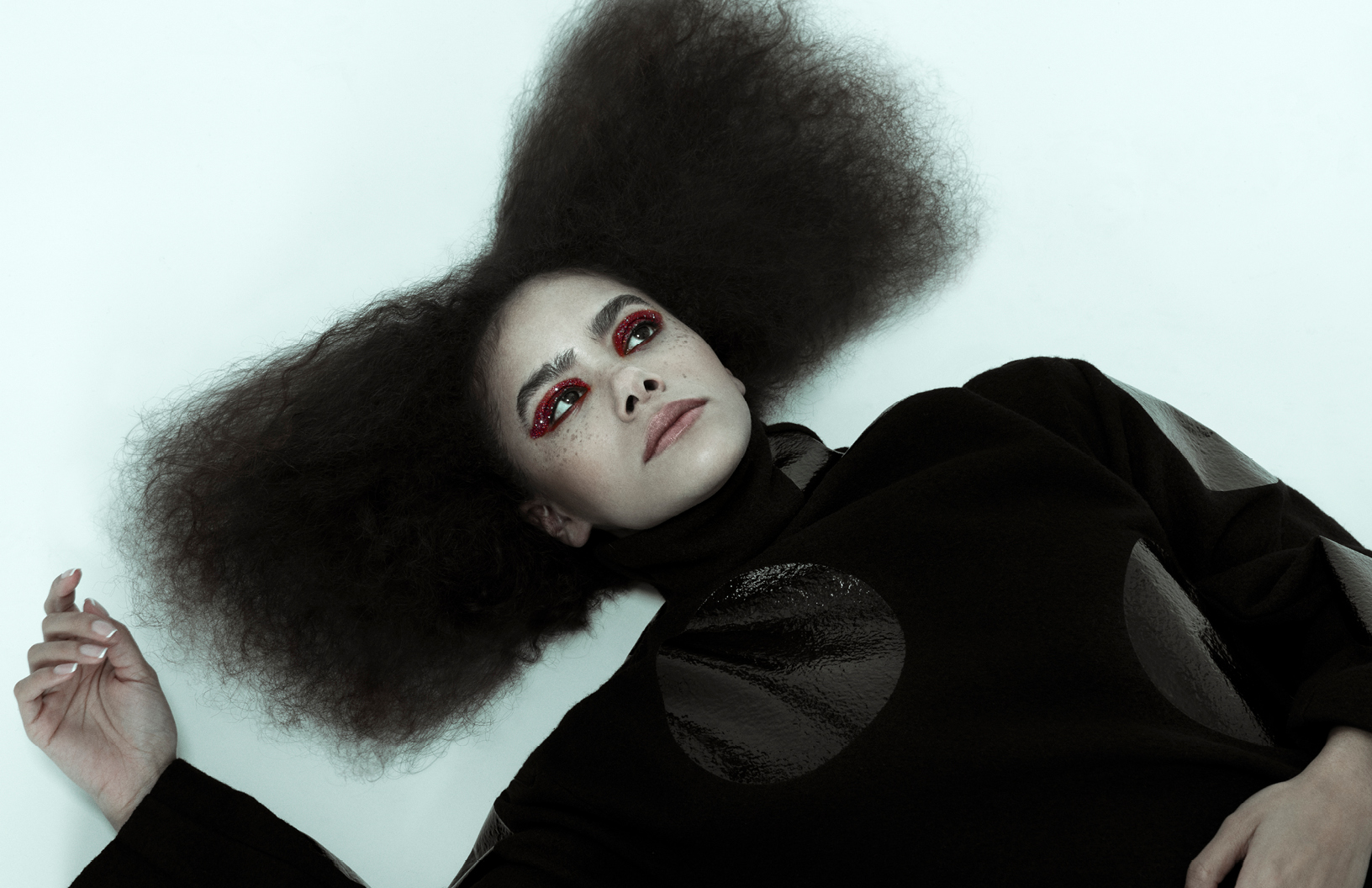 Even in the scenes in the therapist’s office, I feel like a lot of people can relate to having overbearing parents that want to be involved despite the child needing space. I feel like it isn’t often depicted in TV or film.

I love that we finally see those conversations being had between Ginny and Georgia. In a lot of ways, they are close and very open with each other on a lot of like taboo subjects. But when it comes to very serious matters, Georgia doesn’t really want to talk about serious things. She wants to pretend like everything’s fine, but Ginny is going through something really, really difficult. It’s not to say that Georgia isn’t but I think what’s beautiful about the therapy scenes is that you see Ginny being able to actually voice her pain. When Georgia is there, you see Ginny have the courage to voice her pain to her mom for the first time and her mom has to listen. It’s such a beautiful moment for the relationship.

I found the poem scene during the open mic night really powerful as well. What was filming that scene like?

To be honest with you, I was dreading that scene. I think that was the scene that I dreaded the most for season two. I’m not a spoken-word person. I respect anyone proficient at slam poetry or spoken word. I just don’t have that experience. I was really, really dreading it because I knew it was gonna be this long, very metaphoric and very emotional thing and the fact that Georgia comes in to witness it is just a whole other aspect. The day we filmed it I felt so bad for everyone because there are so many different cuts. I only did five takes for my cut, but I still had to read the poem over and over and over for everyone else’s takes. I’m pretty sure I did it 30 times. I was like apologising in-between takes to everyone for having to hear me do this over and over. It is a powerful poem and I hope that people really do connect with it. 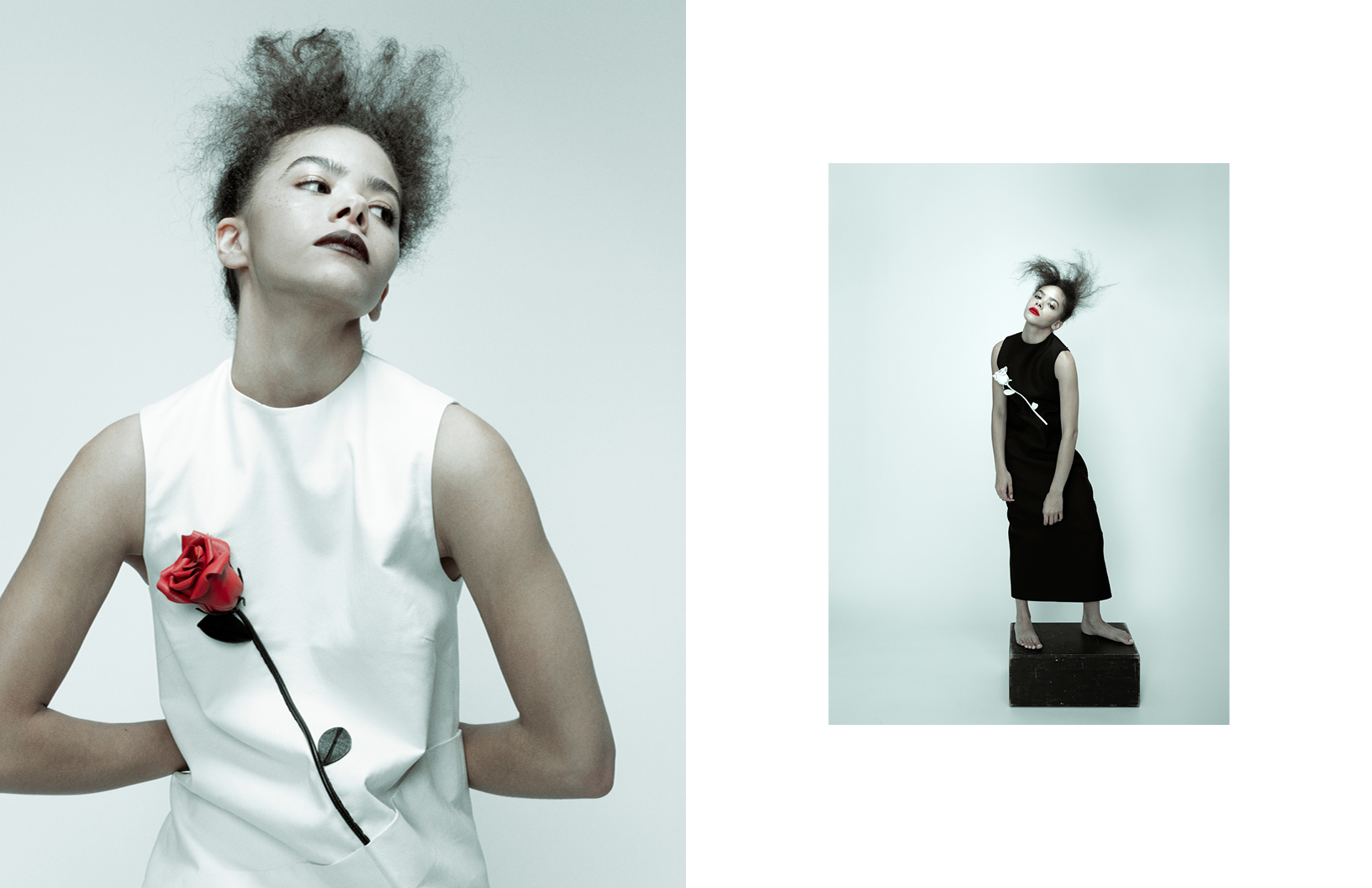 The plot about the teacher assigning you to conduct a discussion for the book, which was a masterclass in microaggressions. The scene between Max and Ginny in the hall was really powerful when Ginny mentions about no one else intervening — like it’s all on her to fight her battles when other people could point out that it’s wrong. This show deals with race in such a great, timely way.

I think it was just established early on that Mr. Gitten is not great. I know it was important for the writers to include those differences. Maxine, although she tries her best, does have blinders. Bracia understands Ginny’s experience but isn’t in the class with her. It’s important to point out that oftentimes, people of colour in particular feel like they are the only ones who are witnessing because oftentimes they are on the receiving end of a lot of micro-aggressions and it’s easy if you don’t have to deal with that experience. It’s easy to ignore it or it’s easy to brush it off.

When, in reality, if you’re the recipient of that kind of that particular covert racism micro-aggression — especially if it’s from an authority figure — it’s extremely alienating, isolating, and frustrating to know that everyone in the room is seeing the same thing that you’re going through. They’re witnessing this injustice but still, you’re the only one who is saying anything about it. That further perpetuates more negative stereotypes like, “Oh, you always want to turn something into race or you’re always playing the victim.” That can be very, very upsetting for people who are in those positions. When we see Ginny having to do this task and talking to her father about it, she decides to do it, and then she finally is like, screw this, I’m quitting. When she talks to Max about it, I am so happy that we included that because it’s such a real dynamic in a lot of people’s friendships, especially if you’re a Black person or a person of colour with white friends who don’t understand.

Is there a scene in particular that sticks out to you? For me, it’s the car scene between Ginny and Georgia.

That episode was a tough scene. Brianne did such an incredible job; she made it easy for me. I was just sitting there crying my eyes out because she was just so compelling. I don’t know if I love it because it was really hard, but the scene in episode six when Georgia finds out about Ginny’s burning was a really big one. The breakup scene was a very big one. I think, more than anything, I’m drawn to those tender moments because they’re so few and far between that anytime Ginny is happy with her relationship with Marcus, which is so cute and tender, or the scene where Max imitates Ginny and Marcus which was fun to film because Sarah is so funny and I couldn’t keep a straight face. I am drawn more toward the happier moments because Ginny is hardly ever happy! 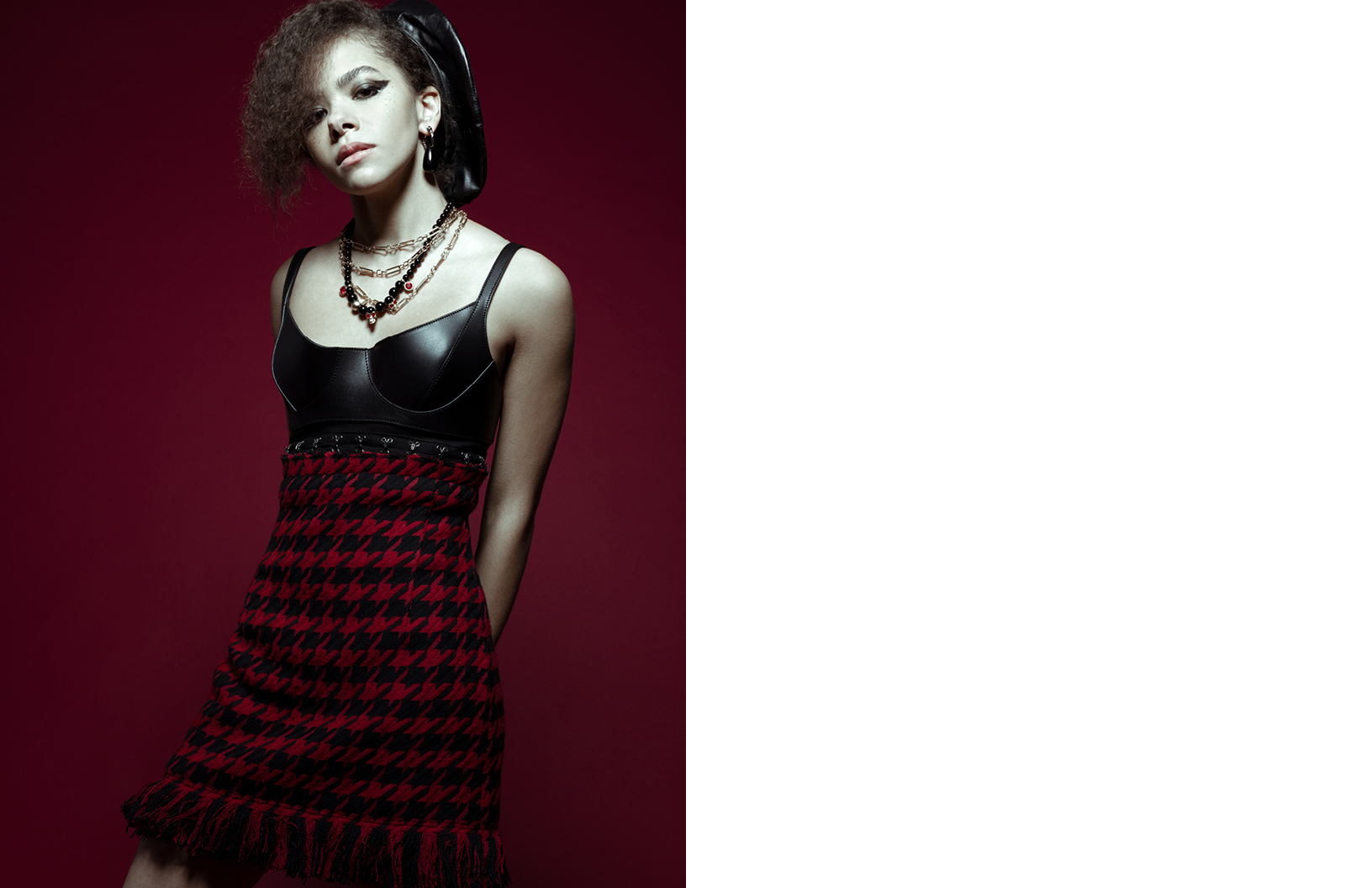 In an interview last year you said you hope in season two Ginny gets “down and dirty” and turns into Georgia a little bit. We see that as she begins to grapple with her mother’s secrets, like in the scene with Gil getting shot and Ginny helping clean up. Knowing what you now know about Ginny’s arc over the season, what advice would you give to her?

Wow, did I say that? That’s a good question. She was okay towards the end, and then the whole wedding thing happened so now I’m thinking, please don’t be back at square one. Please be okay. I guess I would tell her to lean on her loved ones. In season one she had new friends and this little love triangle, but she was still really lonely and lost and trying to figure out who she was. In session two you can see her trying to get help from other people and not carry all her burdens by herself. I just hope that by the end of season two, you see her finally coming into her own in that way. I just hope if we get season three, I would hope that Ginny uses her resources and that she trusts the people that she loves to support her through this.

Lastly, if you could manifest something for yourself in 2023 what would it be?

I would love to manifest strength. I think the last couple of years have really tested everyone’s strengths and I’m still trying to recover some of that. I’m really hoping that I can find that strength again this year. 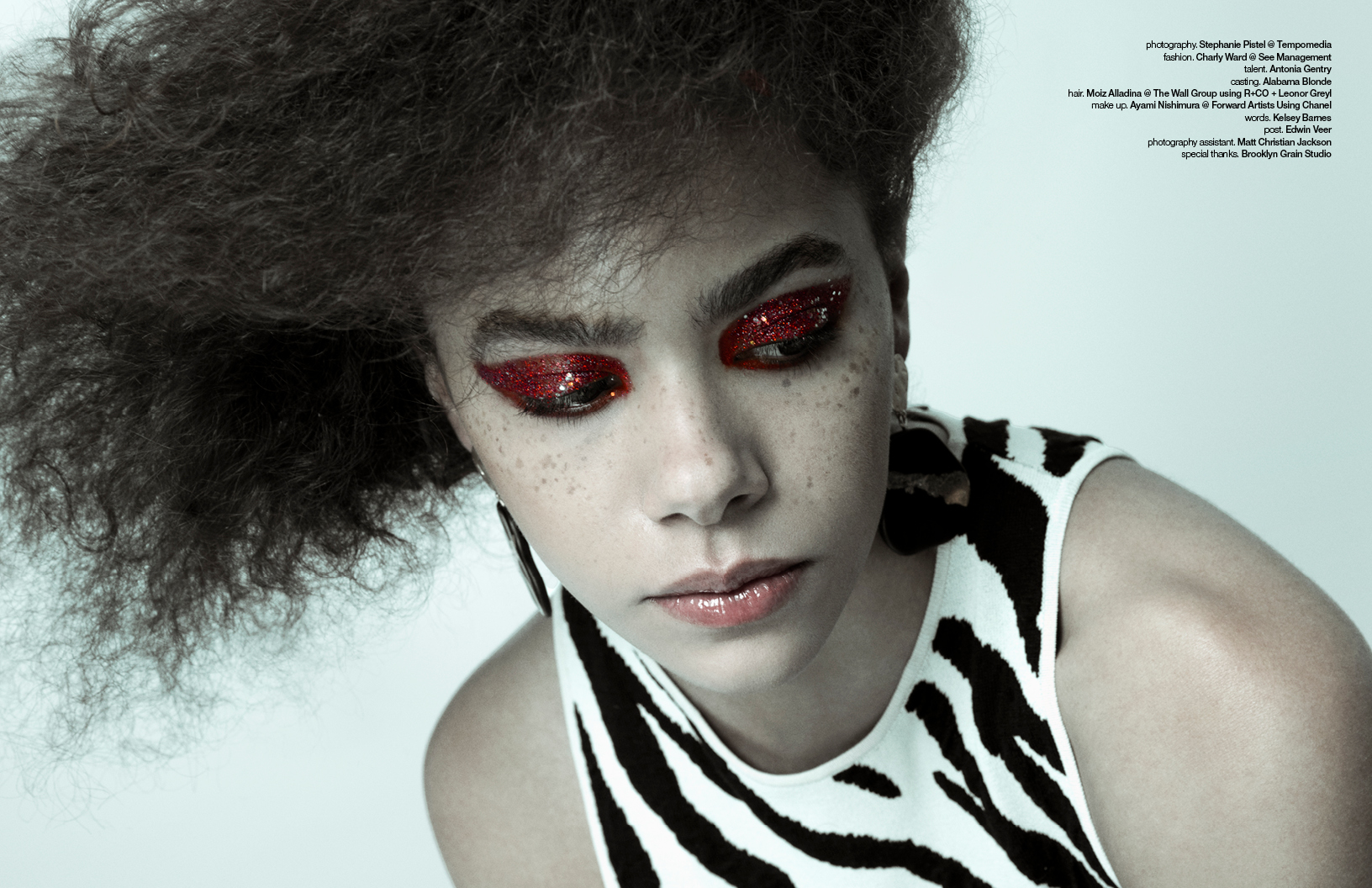 Season 2 of Ginny & Georgia is streaming now on Netflix.