The third day of Paris Haute Couture Autumn/Winter 2016-2017 Fashion Week showcased sculptural wonders. From Stéphane Rolland’s nod to geometry and cubism to J Mendel’s skilfully cut garments, this day highlighted architectural silhouettes. A common colour palette of olive, fiery taupe, ruby, and onyx trickled throughout every collection. We also embraced the worldliness of Aouadi’s designs, the drama of Julien Fournié, the dark sanctuary of Ludovic Winterstan, and the seductive playground of Alexandre Vauthier. 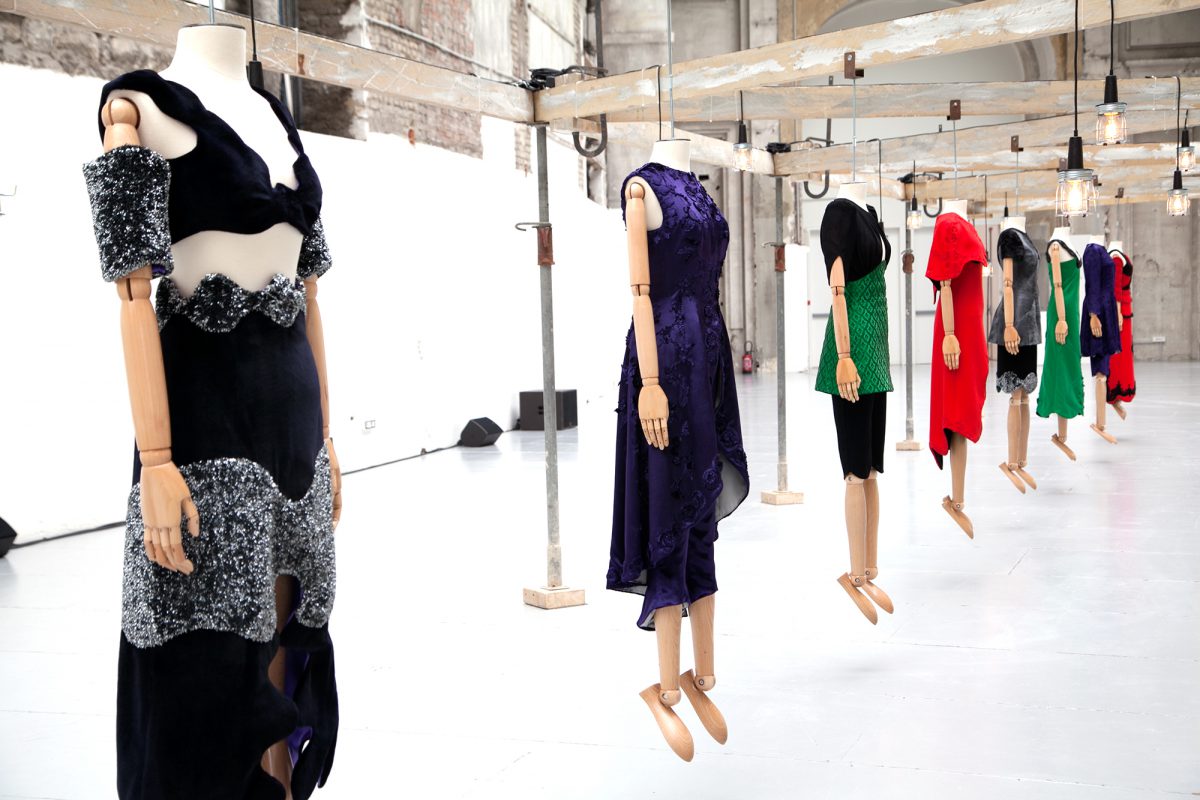 Designer Yacine Aouadi of haute couture label Aouadi intertwined Eastern and Western influences so that they coexisted harmoniously, a search for peace in our turbulent times. The Algerian couturier presented his third collection in the Grand Palais, a story that takes the architectural lines of cathedrals and the ornate detailing of mosques to create 13 silhouettes of hypnotic curves. A certain royal violet velvet dress highlighted a masked appliqué effect; a special technique of slightly burning the material was implemented. Aouadi demonstrated his sharp eye to fluid shapes and mosaic embroidery in a collection that speaks to the need of cultural diversity in our current social climate.

Whether Julien Fournié reinterprets or reinvents, he always seems to be at the forefront of couture — the Parisian designer knows where to tuck, and where to pleat, he knows how to invent unorthodox patterns and of course — drama; Fournié thrives off of drama. His celestial parade of masculine and feminine forms showed exceptionally tailored, reworked tuxes with tails, alongside tricolour gossamer gowns with flouncy sleeves and tied necks that were imbued with sequinned swirls. A midnight blue macramé fur jacket and an asymmetrical crème blazer with matching trousers embodied wearable art. Confetti sprouted into the air as Fournié made his exit but perhaps fireworks would have been a more deserving choice for the grand finale.

After a long-time career in prêt-à-porter, Gilles Mendel, head designer of J Mendel, and a Frenchman synonymous with reinventing luxury, appropriately unveiled his first ever couture collection in Paris. A master of gauzy gowns and more importantly, a veteran furrier, Mendel proved he has the savoir-faire to compete with some of the bigwig houses that cater to glitterati and Instagram likes. His first look, a shy flirtation, of what would later escalate to a full-blown tease; showed a pearly perforated off-the shoulder top that matched a protracted sequinned geometrical skirt. Barren shoulders were cocooned with remarkable, untraditional chinchilla and mink cape dresses. While sultry bronze corsets on top effeminate frocks gleamed with golden accents that gave Mendel his start.

A dramatic musical interlude complimented a darkened sanctuary of spidery silhouettes adorned with raven fur and leather, for a Burton-esque fable of laminated wool gowns at Ludovic Winterstan. A cinematic voyage down the black hole of Winterstan’s shadowy imagination, carcass-like head pieces sat on top models’ braided manes, their faces painted and attached with silver chain, like grim warriors, to reflect Winterstan’s Vanitas of capacious forms. Every witchy detail was perfectly placed; voluminous feathered epaulettes blended with lace sleeves interwoven with mohair to augment knitted and inlaid panels of gunmetal Swarovski crystal and pearls. An experiment with mood and material, the dusky oeuvre was very much a lively, spirited spectacle, despite being born in Hades’ cave.

Alexandre Vauthier, the fisherman of couture, knows how to reel you in. In his latest couture catch— he unveiled flashes of Swarovski crystal overlay on wide mesh leggings under a single sleeved asymmetrical cocktail dress, tied with an enormous leather bow. The French designer incorporated his signature golden zipped jumpsuit, but it was refreshing to see the master of floaty forms toy with more conceptual looks — origami flared gowns revealed less skin but more imagination. Hooking us in with suggestive militia silhouettes, Vauthier exhibited olive mini-dresses amplified by over-sized pockets, sequinned army cargo pants, and a show-stopping verdant gown with a varicoloured encrusted bodice  (rocked by model du jour Bella Hadid) to embody the Vauthier “It” Girl: empowered, influential, and totally on trend.