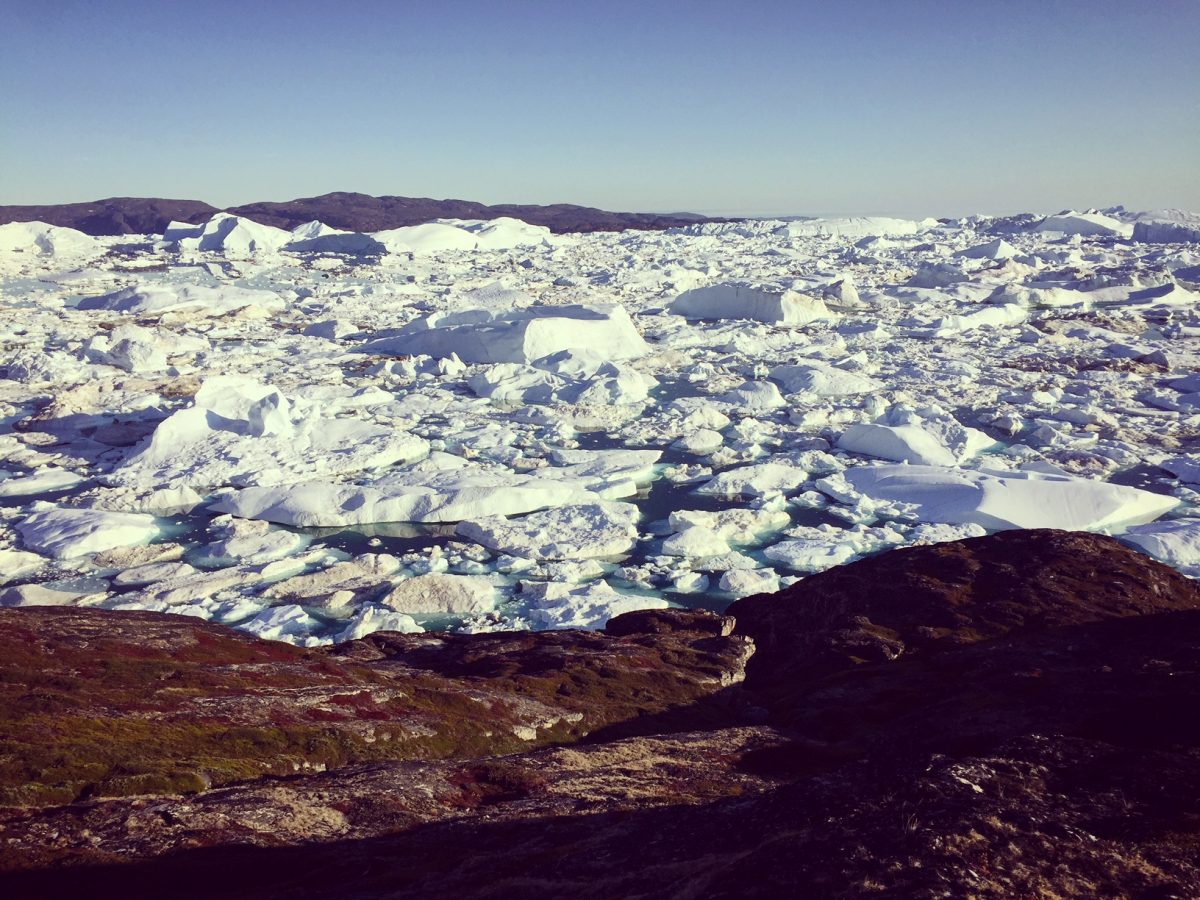 Greenland remains a great mystery for most, even after centuries of arctic expeditions. With flights only arriving from Reykjavik and Copenhagen, Greenland’s travellers are limited. It may be the world’s largest island, but Greenland has a population of 56,186, making it the least densely populated country in the world. The majority of residents are Inuit, whose ancestors migrated from the Canadian mainland in the 13th Century. During the summer, the sun stays in the sky for nearly all hours of the day. In August, the forecast reaches a high of around 12 degrees Celsius, but with the constant sunshine it feels more like 17 degrees. The winters, however, are fiercely bitter with practically no sunlight at all.

An ice sheet covers 80% of Greenland making it an icy haven for wildlife such as polar bears, arctic foxes, rabbits, musk ox, reindeer, and a large variety of sea life such as the humpback whale, seals, and fish. The practically untouched nature truly gives the impression that nothing stands between you and the wilderness.

Greenland has been inhabited on and off for 4,500 years, until the early 18th Century where Scandinavian explorers reached Greenland. It is currently an autonomous constituent country within the Kingdom of Denmark. 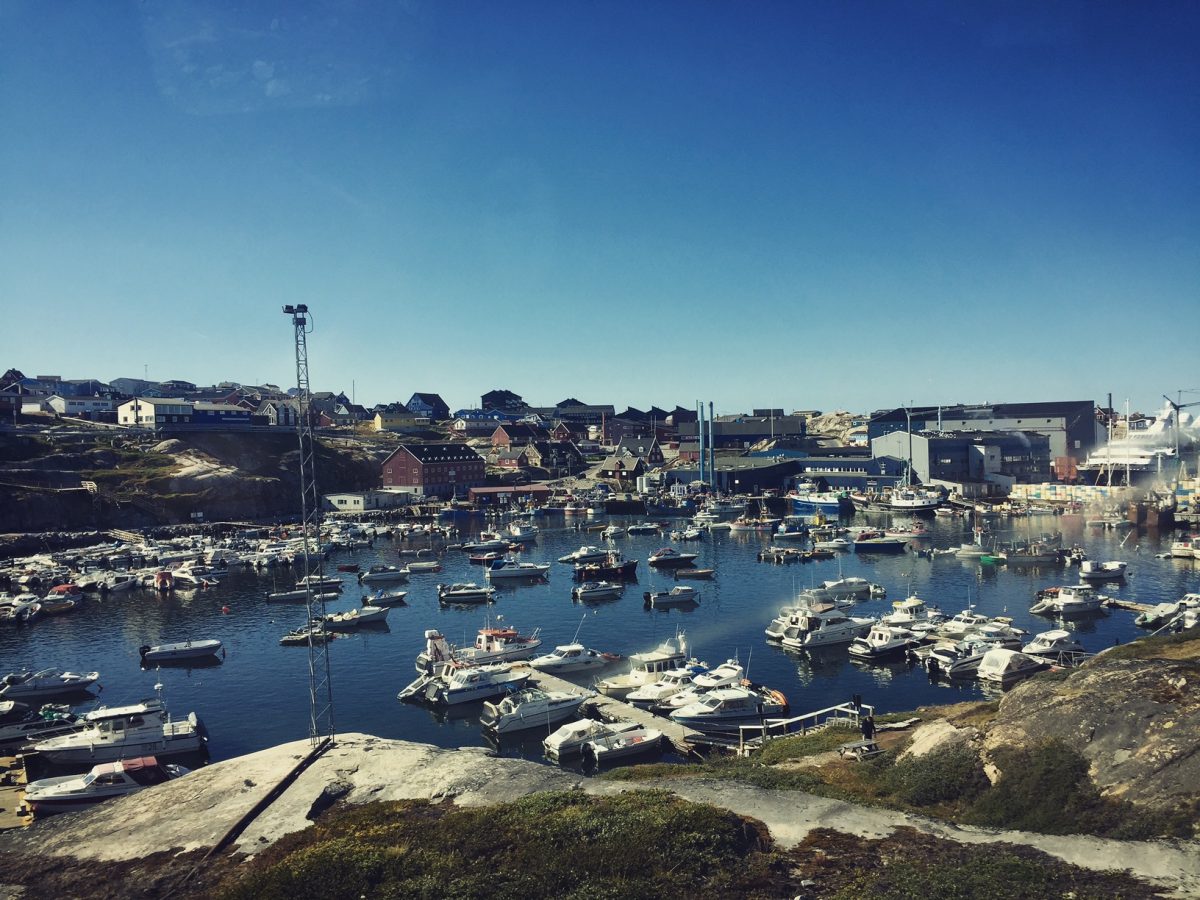 When deciding which city to visit on your trip to Greenland, consider Ilulissat and Ilimanaq for the incredible Icefjord UNESCO World Heritage Site. Located on the west coast of Greenland, Ilulissat’s Icefjord is one of the few glaciers through which the ice cap reaches the sea. The stunning beauty of the Ilulissat region is due to the unique combination of the enormous production of icebergs from Sermeq Kujalleq and the presence of Isfjeldsbanken, the threshold across the mouth of the fjord where the icebergs run around. An unending drama of changing forms, colours, and sounds is created as the icebergs melt, collapse, and collide with each other. Staying for the sunset is highly recommended as the icebergs change colour with the diminishing light. The sky becomes pastel and the icebergs red, then violet.

There are three hiking trails, accessible to hikers of all levels: yellow, blue, and red. The yellow trail brings you to the beginning of the icebergs and around the bay. It is 2.7 km long and takes approximately 1.5 – 2 hours to complete. This eventually leads to a solidly built wooden pathway that connects to the blue trail. This blue path is the longest out of the three, and ventures into the mountainous regions away from the ice. The blue route is 7 km long and takes around 5 to 6 hours to complete, depending on your pace and how frequently you stop to admire the majesty of it all. As temperatures rise, however, the mosquitoes come out to play. There are swarms of them, but their bark is bigger than their bite. Be sure to bring some repellent just in case. The atmosphere transforms from a poetic array of icebergs to rocky terrains of sweet moss and flowing rivers. The red trail, which is 1 km long, is a shortcut to a peak of a mountain. This connects to the blue route, the most recommended trail, where you can fully admire the astonishing natural phenomenon. 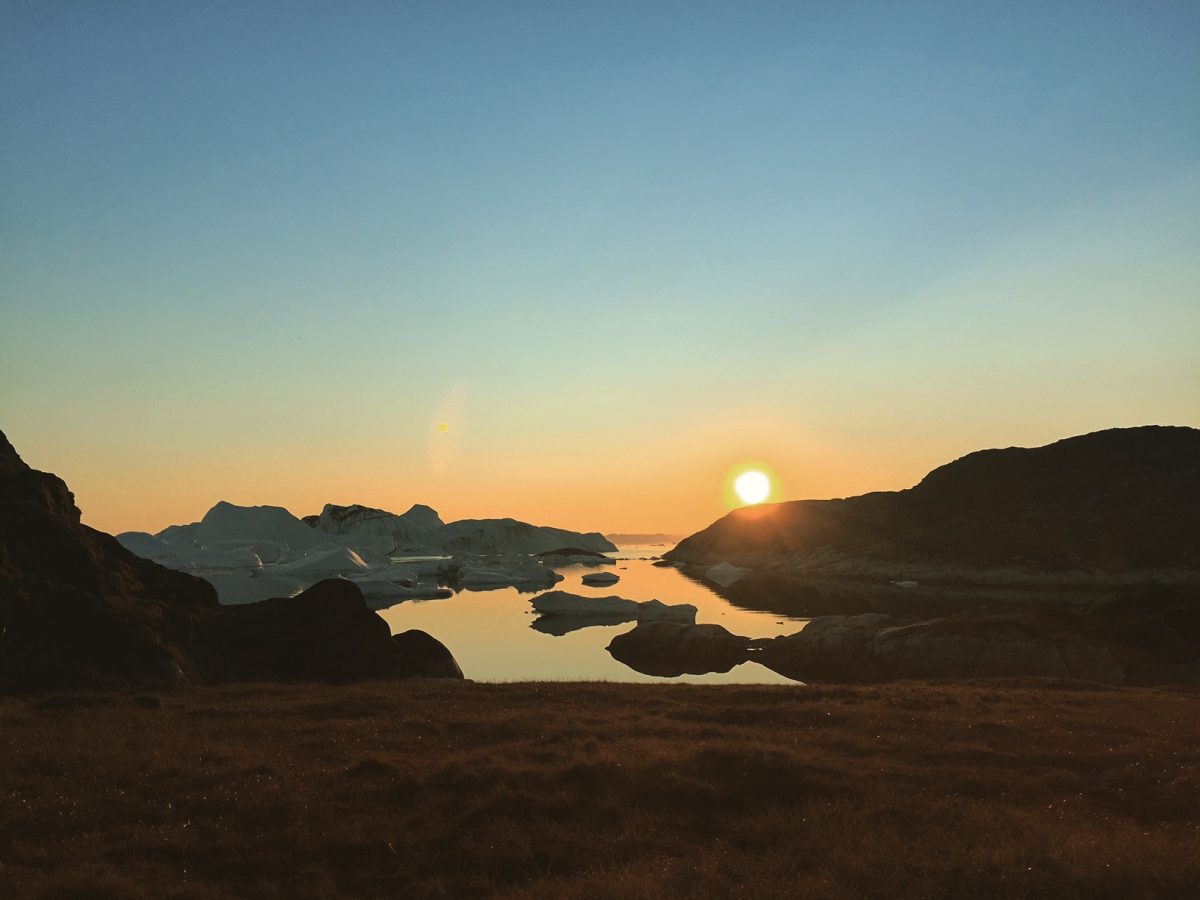 Sunset at the icefjord

At the cusp of the trail when re-entering the town of Ilulissat, you can hear the barks and howls of the sledge dogs. The adult dogs are chained to the property, but the puppies are allowed to roam free. While the signs clearly indicate, “Do not feed or touch the dogs,” I couldn’t help but play with the young ones who are extremely affectionate. You can feed the dogs at 5:00PM everyday, or even go for a sledge ride during the winter.

For the past three decades, Ilulissat has continued its rapid development. The town, which was founded as a modest settlement at a natural harbor on the Greenland west coast, has grown large. Today, Ilulissat is the largest town in the Disko Bugt region, the third-largest town in Greenland, and a centre of education, culture, administration, fishing, and tourism. The small, brightly coloured wooden houses on the rocks look like Lego bricks scattered in a vast landscape. It takes as little as 30 minutes to walk across the town. 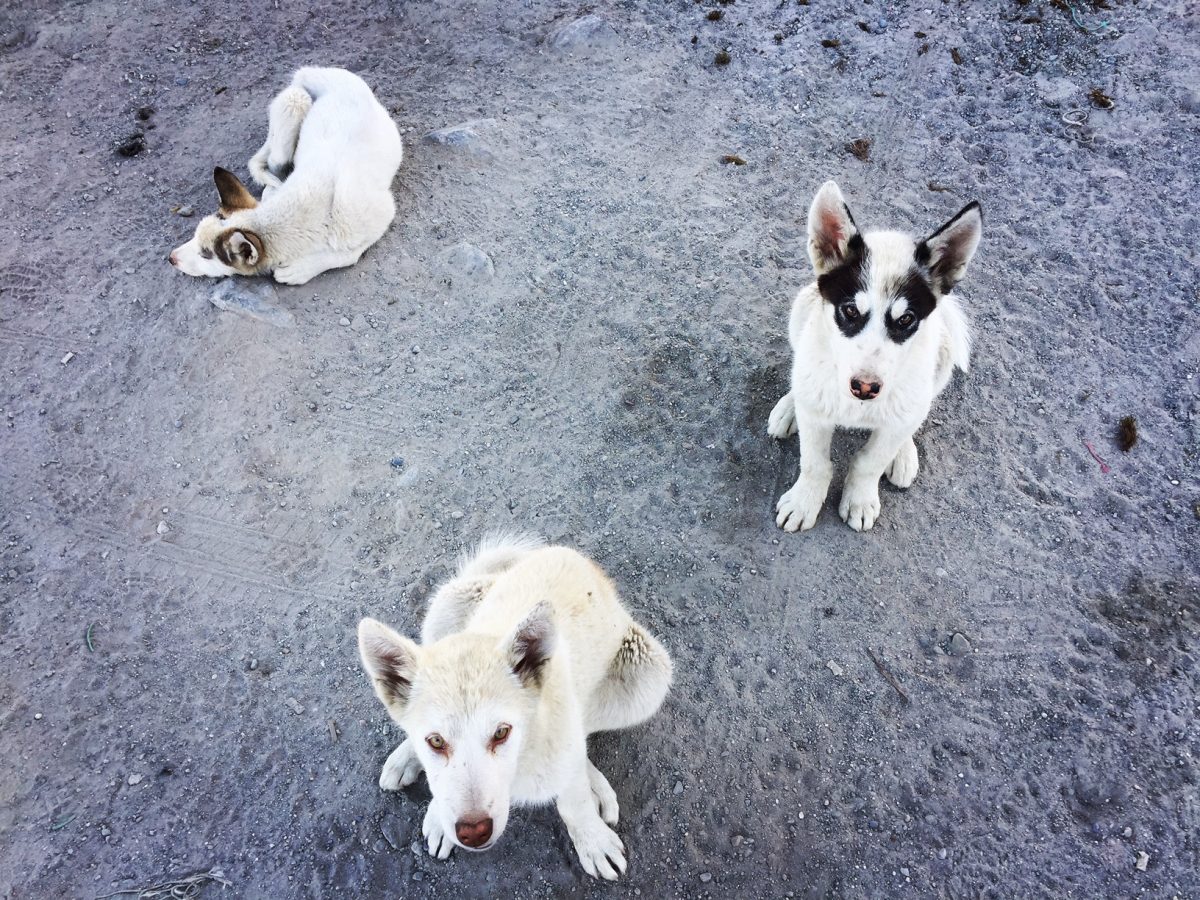 A comfortable accommodation would be Hotel Hvide Falk, which has cosy rooms overlooking the water and icebergs. Be sure to check out the bright and modern Café Iluliaq for a chai tea or cappuccino. This establishment has Wi-Fi as well, which can be purchased by the half-hour. For a quick snack, the food stand next to Café Iluliaq and Ice Cap Tours has comfort food such as sizzling hotdogs – well deserved after a long hike. While Ilulissat has restaurants that boast Greenlandic cuisine, the items can be on the pricey side. For those on a budget, there are supermarkets everywhere, all within walking distance. 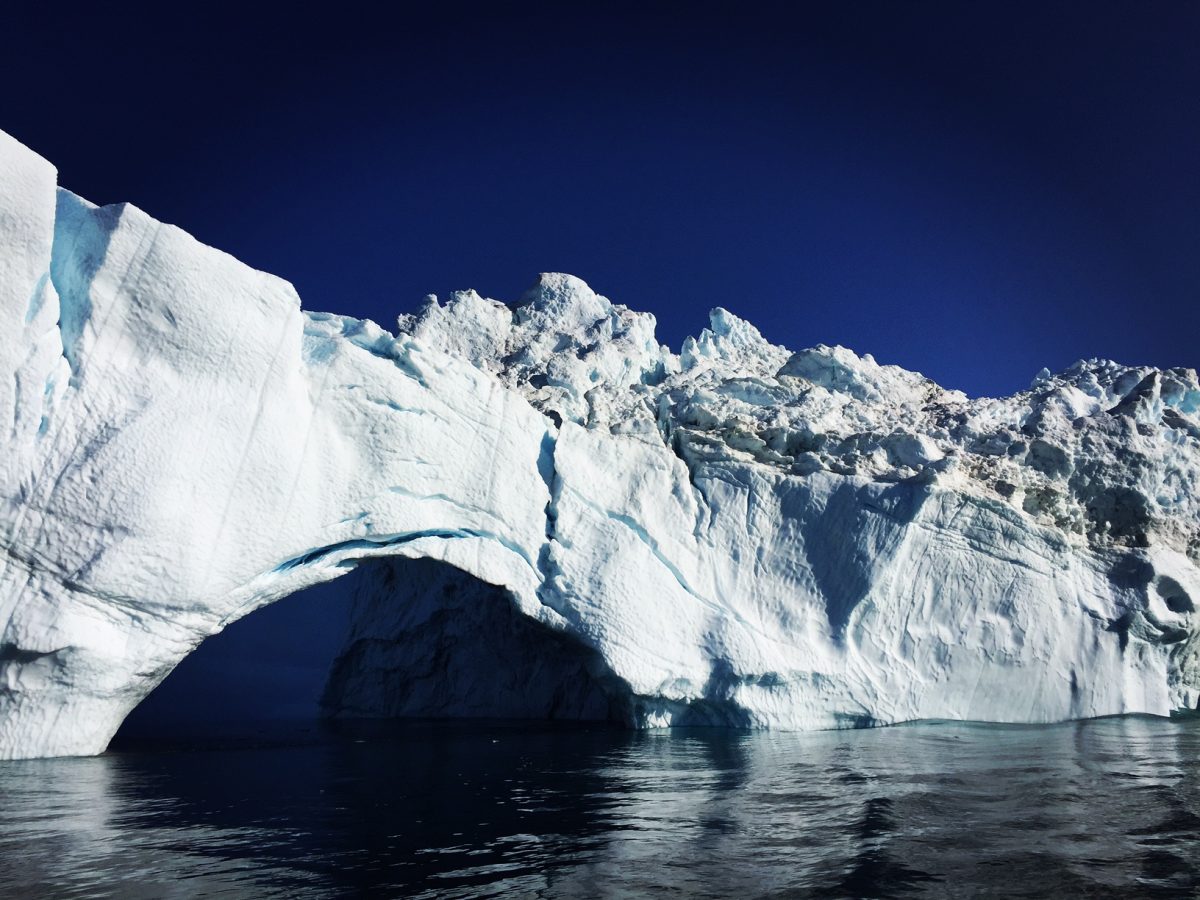 Hoping to get a closer look at the icebergs? Tourism agency World of Greenland offers a 2 ½-hour sunset boat tour. As you traverse the monumental icebergs, you also get a chance to spot whales whose fins and tails peek out of the frosty depths. A quick yet educational presentation is given on the different kinds of ice. To keep you warm, tea and coffee are served on-board. This peaceful excursion is highly recommended for a more intimate experience with the icebergs.

A 30-minute boat ride brings you to a neighbouring village called Ilimanaq. Ilimanaq means “Place of Expectations” – maybe the expectations of a catch. For thousands of years the sea has been generous with its supply of seals, whales, Greenland halibut, Atlantic wolfish, cod, lumpfish and trout. Fishing is the leading industry. It is no coincidence that in the settlement of Ilimanaq we find invaluable cultural heritage in the shape of two of the oldest houses in Greenland, dating from 1751 and 1778 – the earliest years of the colonial era. Claushavn, as Ilimanaq was known at the time, is one of the oldest settlements in Greenland. It was founded in 1741, at the same time as Ilulissat (Jakobshavn) located 15 kilometres to the north. 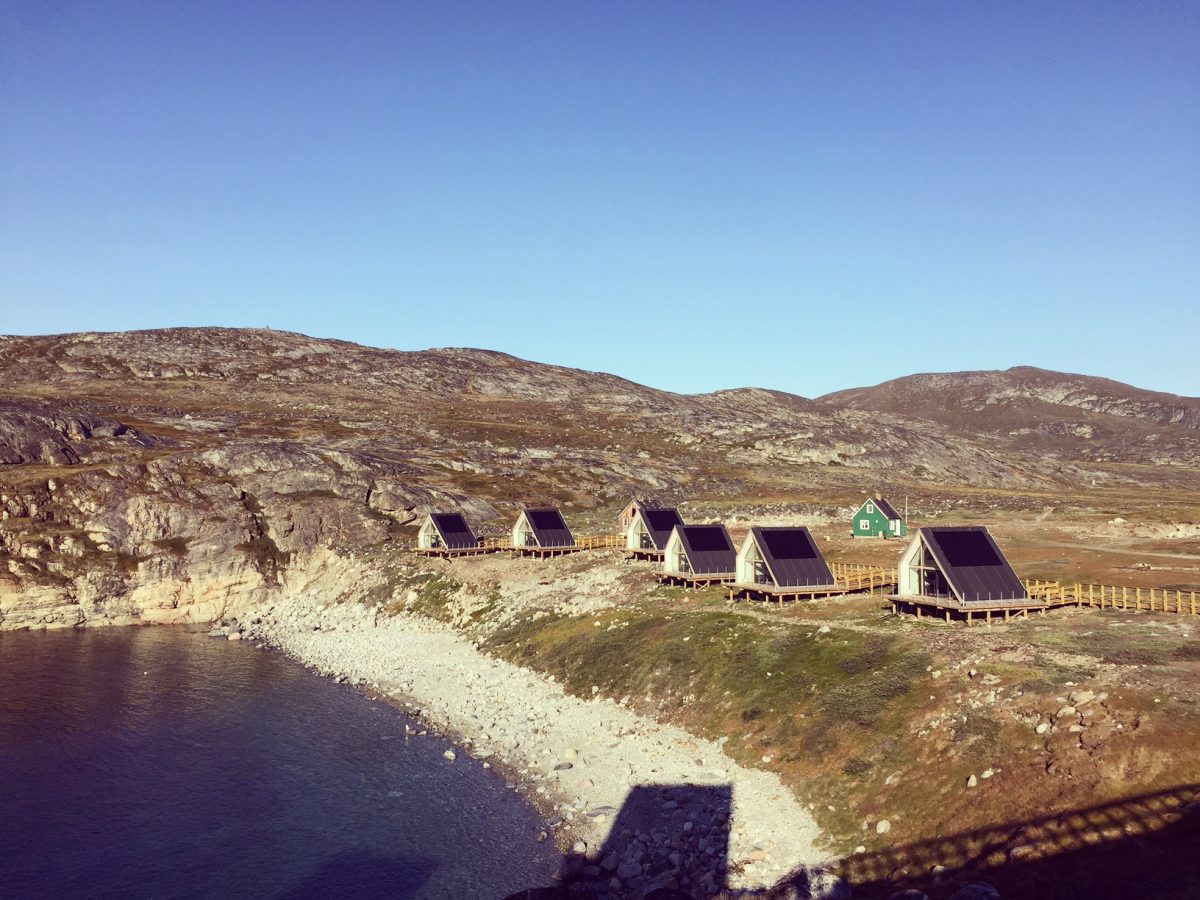 Ilimanaq was once a thriving place. By the standards of the day, it had a large population: in its heyday 254 inhabitants roamed the area. Now there are around 56 inhabitants.

World of Greenland constructed luxury cabins on Ilimanaq’s waterfront. Ilimanaq Lodges are powered by solar panels; each cabin comes equipped with hot water and electricity. The modern design of the lodge allows for comfort and seamless integration with nature. Lounge chairs on your personal balcony provide an unadulterated view of the Davis Strait with the icebergs in the distance. The bed in the lodge is probably one of the most comfortable mattresses you will ever sleep on. Moreover, waking up to a pristine view of the horizon – where water meets sky – is certain to be an absolute dream. 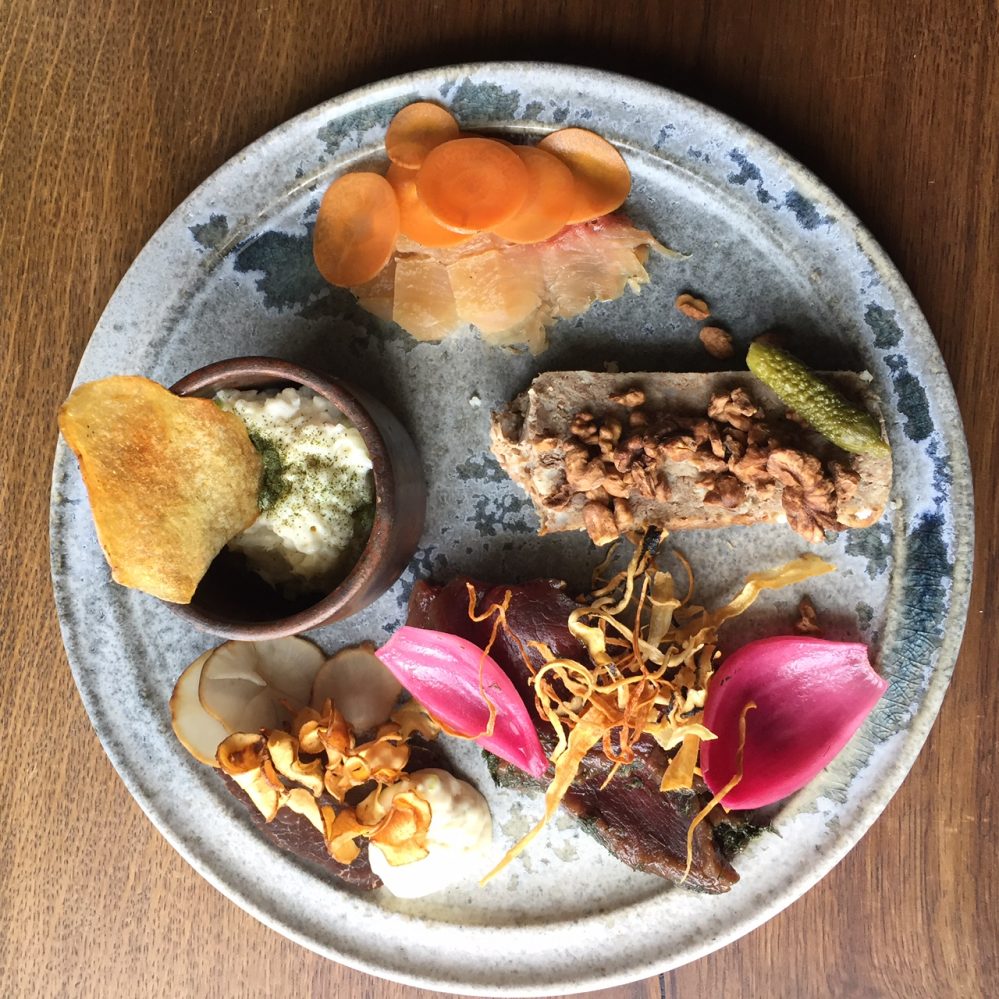 A colorful lunch at Iliminaq Lodge

The only restaurant in town is that of the Ilimanaq Lodge. The establishment serves a delicious interpretation of traditional Greenlandic ingredients: halibut, reindeer pâté, and smoked musk ox. The décor showcases Scandinavian modernity with elements of Greenland’s fishing culture and wildlife in the cutlery and ceramic plates. This set lunch is around 30 British Pounds per person.

There are several activities offered during the day such as a Settlement Walk that provides a history of the town. You can also visit the home of a local family to learn more about the Inuit culture today. In addition, you can hike an unmarked path to get a splendid view of the icebergs from a distance. 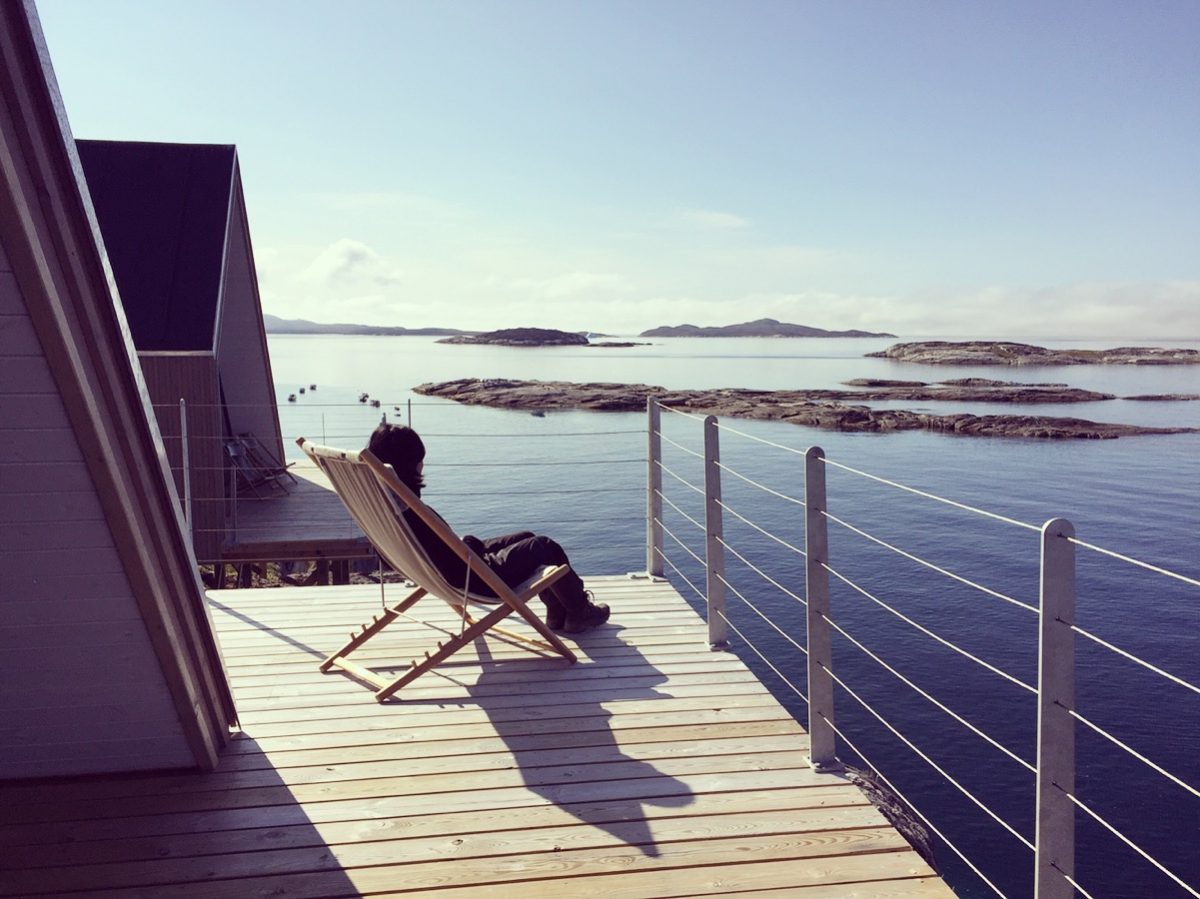 The view from Iliminaq Lodge

Every year, the glacier front has been receding. Glacier change is almost always due to changes in climate. In this case, the retreat is likely due to higher air and ocean temperatures. The retreat is very rapid and raises important questions about global warming and our role in protecting our environment.

Will the icebergs disappear? As long as there is inland ice, there will be icebergs around Greenland. That being said, the inland ice is expected to last for thousands of years.

A voyage to Greenland is for the bold nature lover. Whether you’re seeking adventure by scaling the glacier wall and hiking to see the icebergs in Ilulissat, or a more relaxing excursion for modern comfort in Iliminaq, Greenland is undoubtedly a destination for a curious explorer. Beyond the ice, loving sledge puppies, and wild landscapes, there is an undeniable and welcomed stillness that resonates through the long summer days.