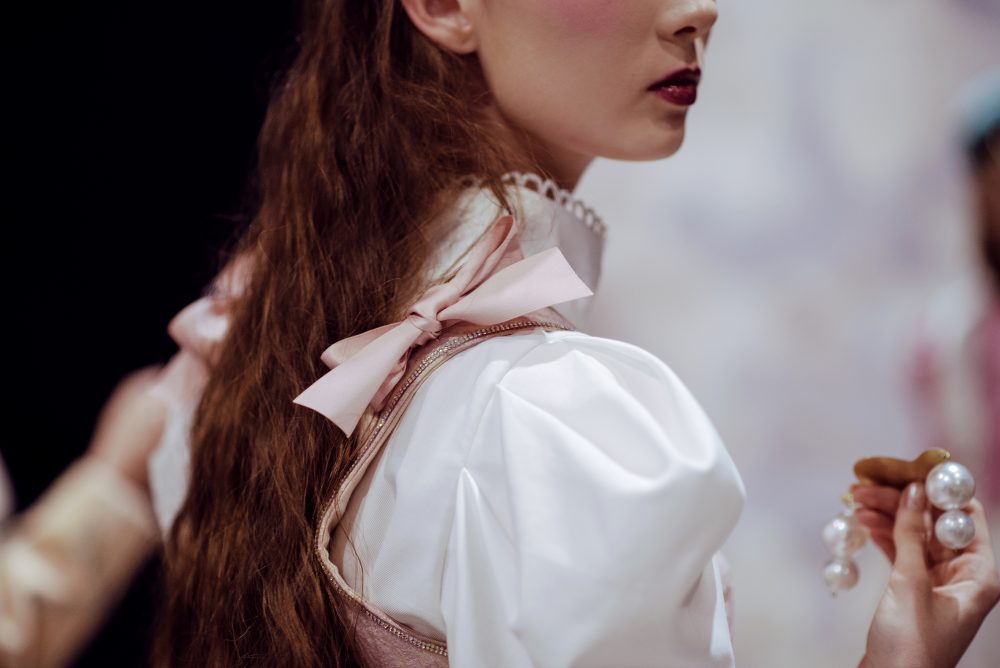 Belgrade Fashion Week is no newcomer to the catwalk circuit and celebrated its 45th edition last month in the Serbian capital. This season, there was a firm focus on independent designers and female entrepreneurs and it’s fair to say that most of the participants fell into both categories. There are many barriers facing designers in Belgrade, a bustling city with a thriving café culture, but one that also still shows some scars of war. Here you will find a group of intrepid women facing those challenges head-on and driving Serbian fashion forward.

For most of the brands showing here, fashion is not so seasonal: Petja Zorec showed SS19, while Ana Ljubinković showed AW19. This is partly because the clothes are produced in very limited numbers, rather than en masse twice a year. For example, siblings Ivana and Jelena Stevančević launched their label SestreS (translated as SisterS) in 2006, but most of their garments are still made by hand and therefore one-offs.

Aleksandra Lalic, meanwhile, presented a non-seasonal micro collection entitled I’ve Been Too Fucking Busy – or Vice Versa, which tackled the very contemporary issue of a woman’s time and the many demands on it. In Lalic’s boutique the rails are filled with beautifully crafted, highly individual, very wearable clothes, but there is only one of each item on display. As Lalic explains, she will create new designs throughout the year and reproduce them to order.

In 2010, Lalic teamed up with fellow designer Vesna Kracanović to launch Modle, a brand that is not trend driven, but rather focuses on production methods. Pooling their expertise, the two designers are working together to develop innovative solutions to the production problems they’ve faced.

Vesna Kracanović, presented her own collection Sorbet on the Belgrade catwalk. In addition, since 2012, she has been producing Siveno, a brand Influenced by Japanese design, but aimed firmly at the European market. Outside of Serbia, Kracanović’s clothing Is sold In Austria, Croatia, Sweden, Switzerland and the UK.

Both the Aleksandra Lalic and Modle boutiques are located In the Belgrade Design District. This 1930s built shopping centre originally sold Western goods, but by the 1990s had turned into a somewhat run down and “spooky” place with bare shopfronts. Young Serbian designers stepped in to breathe new life into the area, which has since become a hub, not only for fashion, accessories and jewellery but for art, interiors and artisanal goods. The cafes here also serve as a meeting point for the city’s creatives.

Meanwhile, in the beautiful historic Kosančićev venac, you will find the boutique of Ana Ljubinković –another designer beginning to make her mark Internationally. Her creations have already been spotted on celebrities including Miley Cyrus, Lady Gaga, Paloma Faith and Grace Chato, although she says her clothing Is designed to be worn on “the most ordinary, everyday occasions”.

The boutique Is also home to the quirky Remake homewares line and colourful, handmade leather shoes from ABO, the latter the result of a successful collaboration between Ljubinković and her sister Eva. ABO’s online store has been successfully selling to international customers, mainly from the UK, USA and Australia, for the past three years, but it hasn’t always been easy.

Ljubinković has faced similar production Issues to some of the other designers. She tells us that, although many powerhouses like Prada, Gucci and Louis Vuitton have shoes made in Serbia, those factories were not interested In working with a small brand. Furthermore, she is not the first designer to tell us that her shoes have been illegally copied and sold by the manufacturers.

“This happens a lot,” Ljubinković says. “I don’t know what’s going on here, but when a factory sees that something is working, they decide to do this. They think a shoe is a shoe, so nobody cares. Even when they got the information that what they were doing was wrong, they didn’t stop. So, we decided to fight.” The sisters took the factory to court and won. Now every ABO design is patented.

ABO Is currently selling around 700-1,000 pairs of shoes a year through Its online store, “which is really great,” Ljubinković stresses, “because our production can’t do a single pair more.” The next step is to increase production to a wholesale, rather than retail, scale while maintaining the quality, and the sisters are looking at factories both in Serbia and in Spain.

Having learnt valuable lessons through ABO, Ljubinković is ready to take her clothing line in the same direction. Currently, international customers can order individual items by contacting her directly, but there is no online store… yet. “Not a lot of brands here actually have webshops and they don’t sell internationally,” she explains. “We had so many problems like Paypal only came to Serbia three years ago. Basically, designers could not take money from customers.”

If the clothing garners as much attention as the shoes (international boutiques are already showing interest), Ljubinković will have to think about increasing production of that as well. At present, she works with two local seamstresses but does the patterns herself. Everything is produced in Belgrade and quantities are made according to demand, e.g. 30-50 pieces for a popular design.

Sourcing fabric is another issue for the designers here. “If I decide to do a collection in a colour palette, then I don’t get to do it because I won’t get the proper fabrics,” Ljubinković elaborates. “It’s never, ‘I need violet, blue and green and I will work with those colours.’ It’s like, ‘I have yellow, red and blue so I will make the collection out of that.’” So, she sources fabrics throughout the year to get the colours and prints she wants or designs the prints herself.

As with so many of the designers here, where there’s a will, there’s a way. With the introduction of easier methods of online payment, partnerships and collaborations, such as the Belgrade Design District, these sisters are certainly doing it for themselves.