Modesty personified is how I’d describe my first encounter with light artist Chris Bracey. Dubbed The Neon Guru, Bracey’s CV includes collaborations with Stanley Kubrick, Tim Burton and David LaChapelle. Chris married at 17 and with a wife and young children to support he was determined to ‘make some money’. Now after 55 years in the business Bracey is opening his first solo exhibition entitled ‘I’ve Looked Up to Heaven and Been Down to Hell’ at Scream. Chris states with a chuckle that he is a few streets away from where he started his career in Soho making neon signs for the sex establishments in the 1970s. As he talks me through the pieces,Chris casually mentions that Professor Green has bought one of the pieces from opening night. I learn that a further six have already been snapped up. The proud Londoner is so unassuming that you can’t help but smile as he mentions little anecdotes for each piece. He explains, ‘Everything in here is from my heart and what I consider to be my art is if I don’t want to sell it then it’s good enough for somebody else. It’s got to be from the soul, from the spirit.’

You’ve worked on some really amazing projects…How much influence do you have on a brief?

Sometimes it’s really tight but Kubrick was good – he was really open. Burton is really good. Some people can be very controlling with what they want and they’ve got their vision and they want what they want. Then, it’s not so creative for me it’s more the nuts and bolts of making it all work which some people don’t understand but that’s my speciality.

What has been your most challenging project to date?

I think the Vegas Supernova [project] – that was eight years ago. Last year I did Palais de Tokyo for Chloé. I did a 30 metre light structure. I only had a couple of weeks to design it, build it and get it there but it worked out. My life is full on. It’s never a dull moment. I often think, ‘When am I going to wake up? When am I going to pinch myself to wake up and it’s all a dream – that I’m actually a roadsweeper and I’ve been dreaming.

What is so appealing about working with lights?

When [my mother] used to push me in a pram –there was one tree that had Christmas lights on it – and even if we were going the other way I used to cry if we couldn’t go past this tree with lights on. There used to be a barn store in Walthamstow Village and the [owner] had hand painted a coach on a bit of cardboard and put some bulbs round it and that’s a magic thing. That initial vision has driven me on with what I’ve done for nearly 55 years. I still find old drawings of that coach and those lights. It’s always been there – it’s in my blood. It’s like visual cocaine. Even after all these years I still love it. When you make something and you turn it on for the first time – it’s like wow – I’ve still got that.

You’re heavily influenced by pop culture – which iconic figure would you like to produce something for?

I’ve always liked [Led] Zepplin. Probably now it would be The Stones. 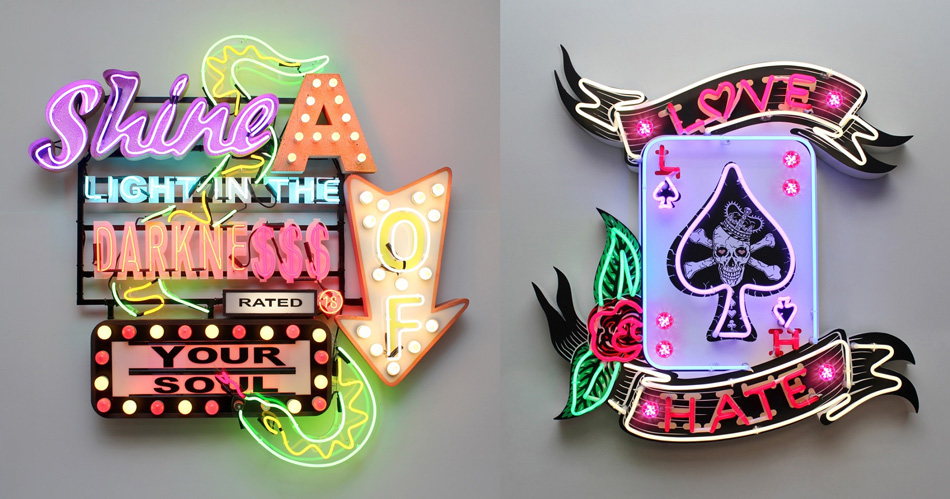 Your exhibition is titled ‘I’ve Looked Up to Heaven Been Down to Hell’ you’re quoted as saying, “I have lived and worked in hell – You always think you are going to end up in heaven but it doesn’t exist.” Explain what you mean.

It’s not that [heaven] doesn’t exist – we don’t really know what it’s like. It’s just that it’s not so good down here where we are now (laughs). Heaven looks good from hell.

What piece are you most proud of in the show?

The Hand of God – I think because it’s controversial and different concept. I always loved the iconography of religion. It’s like the first ad campaign. Every other ad campaign – Coca Cola, McDonalds etc pale in insignificance to Christianity.

If you had to make a sign to sum yourself up what would it be?

‘I’ve Looked Up to Heaven and Been Down to Hell’ exhibits at Scream, from April to 1st June 2013. For more info please visit: www.screamlondon.com