Brazilian Tropics in a Japanese Framework 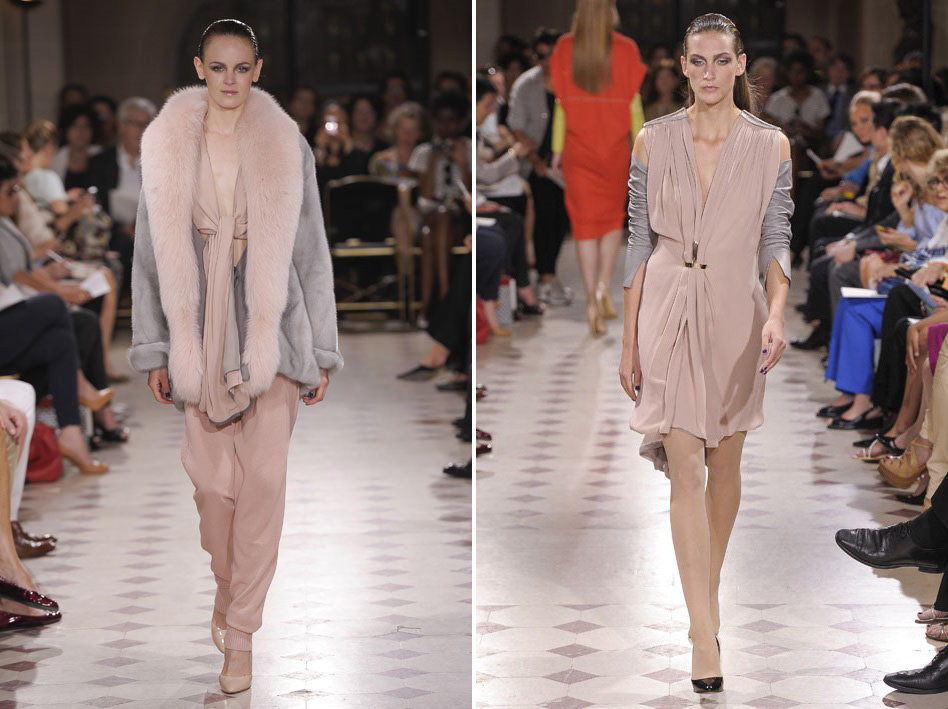 The Brazilian high fashion designer, Gustavo Lins, longed to create a metropolitan collection integrated with a rainforest vibe. Tracing back to his roots, Lins’s collection spoke of modernity mixed with simplicity. What better way to feel at home than to host his show at the Embassy of Brazil in Paris? Optimizing the ornate location to his benefit, Lins exhibited his Autumn Winter 2013/2014 Haute Couture runway collection in a setting that was the opposite of his design. The designer’s goal was to make haute couture, traditionally the overly elaborate, as accessible as everyday wear. In order to do so, he utilized fabrics that evoked cosiness and flexibility.

The show opened with the funky beat of Ferry Ultra’s “Why Did You Do It?” As models made their way down the runway in arch-breakingly high shoes, waves of tranquillity and modesty were felt. Lins was drawn to the structural inspirations of Japanese architect Tadao Ando. With his own architect degree under his belt, Lins attempted to play with empty spaces and lines in his clothing similar to the ones Ando creates in his buildings. 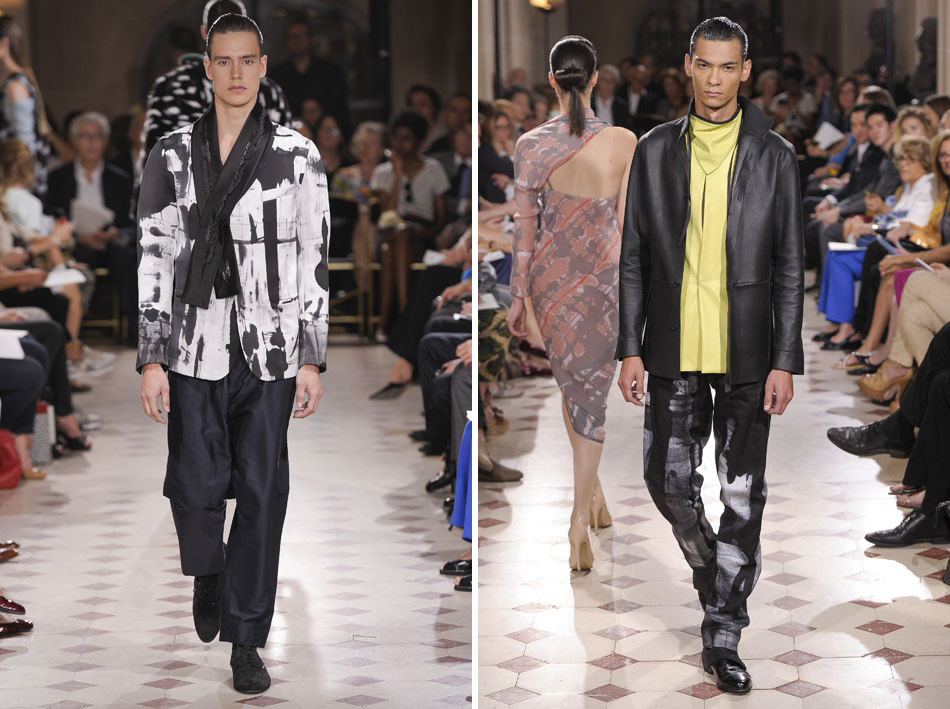 The first look consisted of a powder pink silk tunic and a beige crocodile corset belt that was topped with a camel cashmere coat. Structured and easy-to-wear, the ensemble set the tone of the show as a very wearable collection. Fox furs are placed throughout the line adding softness to certain looks. Other touchable fabrics, such as chiffon and jersey, were also featured. It took 12 meters of silk crepe to make one skirt in this Atelier Gustavolins collection. Some pieces displayed bright pops of orange, while others were decorated with forest prints. 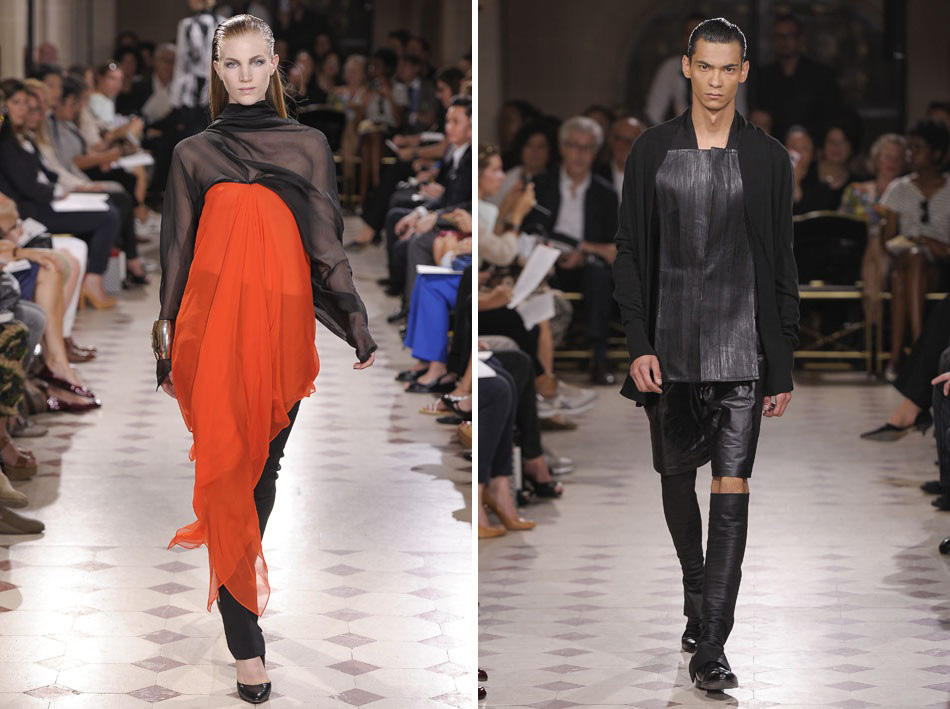 As the soft electric vibrations of Âme’s “Rej” mounted from the sound system, an elegant kimono followed suite. Complementing the straight lines of the tunic, the round circles on the back of the kimono generated an organic feel. Lins clearly played with hard and soft in this collection.

The runway show concluded with a groom character in a light blue buff jacket with a curious slit in the middle and a young flower girl in a white silk dress. The final personage, the bride, was adorned in a powder pink lambskin strapless dress with a romantic tulle silk veil. 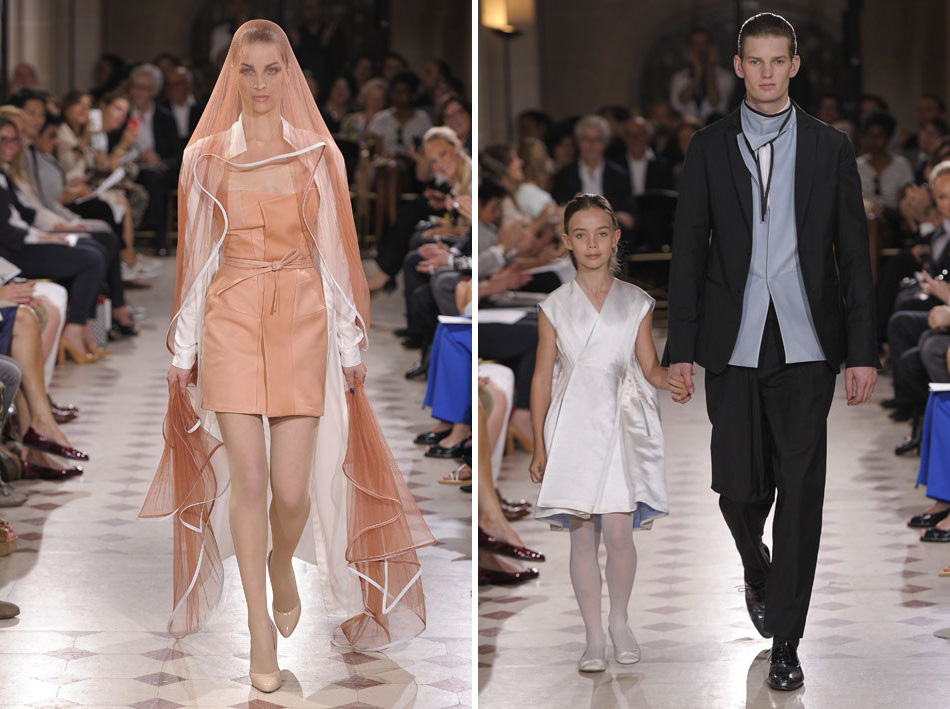