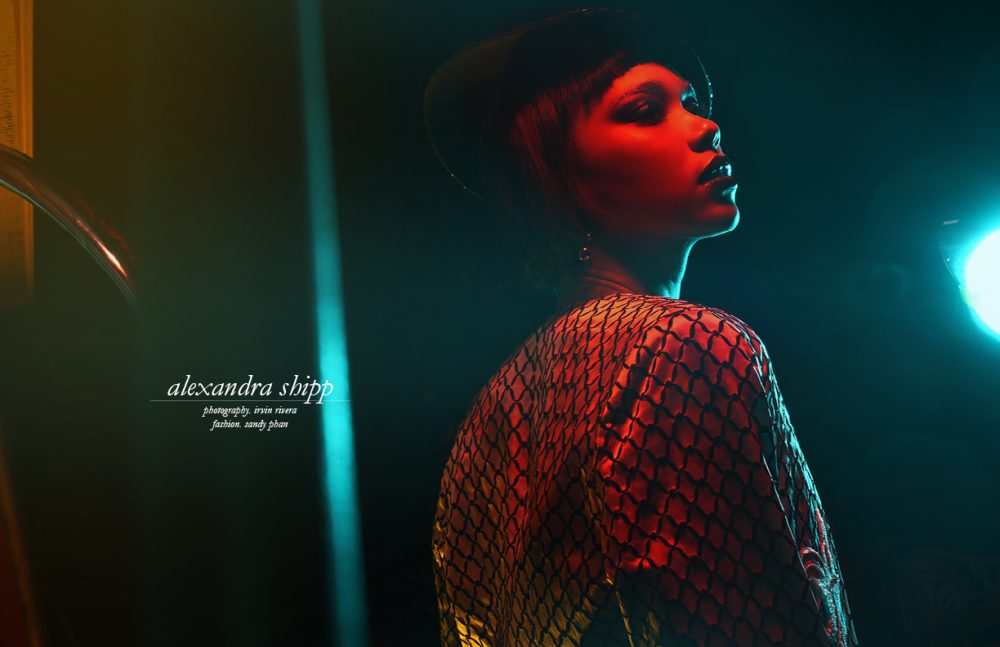 Slasher, action, comedy, drama… Alexandra Shipp can do it all – and hold some tunes all the while. The 26-year-old wunderkind got her big break at the ripe age of 18 with the second instalment of the Alvin and the Chipmunks film series and as KT Rush in Nickelodeon’s teen drama mystery series House of Anubis. Since then, this Arizona native has acted in a slate of high-profile roles in films the likes of Straight Out of Compton, Justin Timberlake’s In Time and Marvel’s X-Men venture: DARK PHOENIX, due for release in 2018.

At only 17 Shipp traded the desertic lands of Arizona for the City of Stars with the sole intention of pursuing her music career. Little did she know she would end up starring in some of the biggest Hollywood productions shortly after. “After a few botched record contracts, music wasn’t paying the rent,” Shipp confesses. “I’ve always acted and loved portraying different characters, so I naturally shifted my focus and that took off first. Music is a huge part of my life, but it’s also very personal. I can’t monetise something that gives me, and the people around me, such a release. Maybe soon I’ll figure out how, until then, I write every day and it’s a part of my spiritual practice”. Shipp is part of the multi-hyphenate generation; a double threat that gleefully and seamlessly proffers an immediately apparent effervescent personality for every project. “I’ve done great projects where I can feel fulfilled musically and as an actor,” she says. Combining the two passions can certainly prove to be a difficult task. “I never sleep; I’ll sleep when I’m done”, she jokingly admits. 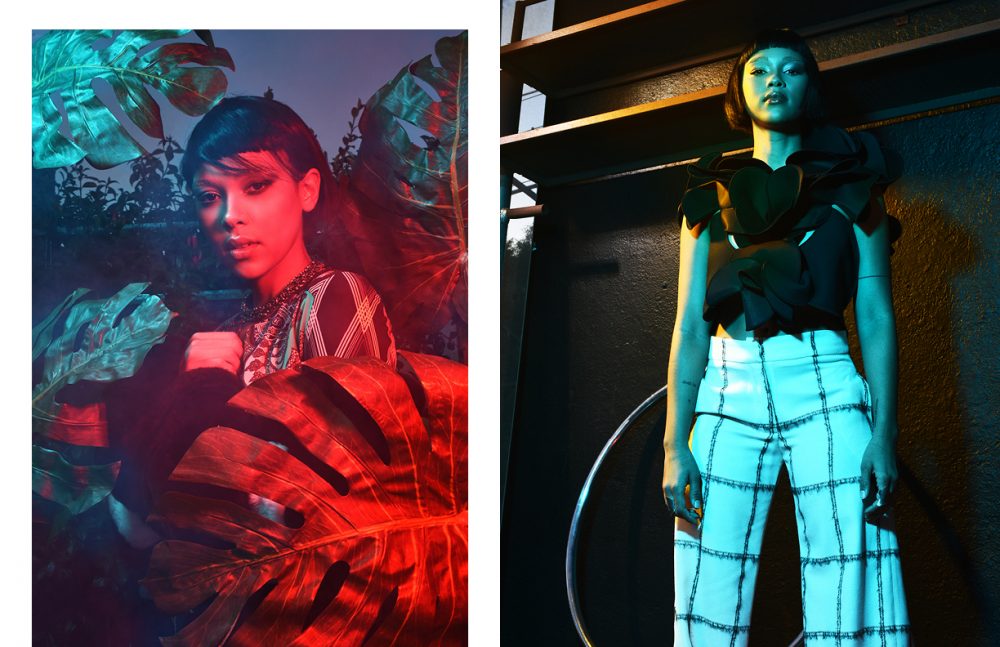 Music is Shipp’s way to escape the world and show her truest self, whereas her poised acting allows her to be someone else. These last few years have seen her grow immensely as an actor and have further emphasised her chameleonic nature. She captivated us with her performance of Kim Woodruff in the Oscar-nominated Straight Out of Compton and this year she stars as McKayla Hooper in Tyler MacIntyre’s horror comedy slasher film Tragedy Girls, alongside Brianna Hildebrand. The film, that premiered last March at SXSW, has been highly acclaimed by the critics, even scoring a rare 100% on Rotten Tomatoes. Shipp confesses that it was her instant love for the characters that drew her to take the part in the first place. “Their love for gore and their friendship is so intense and inspiring. They don’t take no for an answer,” she says. “Also, it speaks to our society’s focus on social media; the way we portray ourselves rarely is who we are on a day to day basis. Knowing your ‘brand’ and your ‘audience’ is a far cry from knowing oneself. This film shines a light on that.”

Playing a social media obsessed serial killer may not exactly resonate with Shipp’s active use of Instagram and Twitter but it sure makes us wonder what her take on social media is in real life. “I am of two minds about it,” she admits. “It’s not a natural instinct for me to share my life on social media. It’s something I have to consciously do and I realise it has become part of our business. On the other hand, it is a way to connect with my followers and be able to talk to them directly; whether that’s sharing a cute picture of my dog or getting feedback on new music – that side I appreciate.” 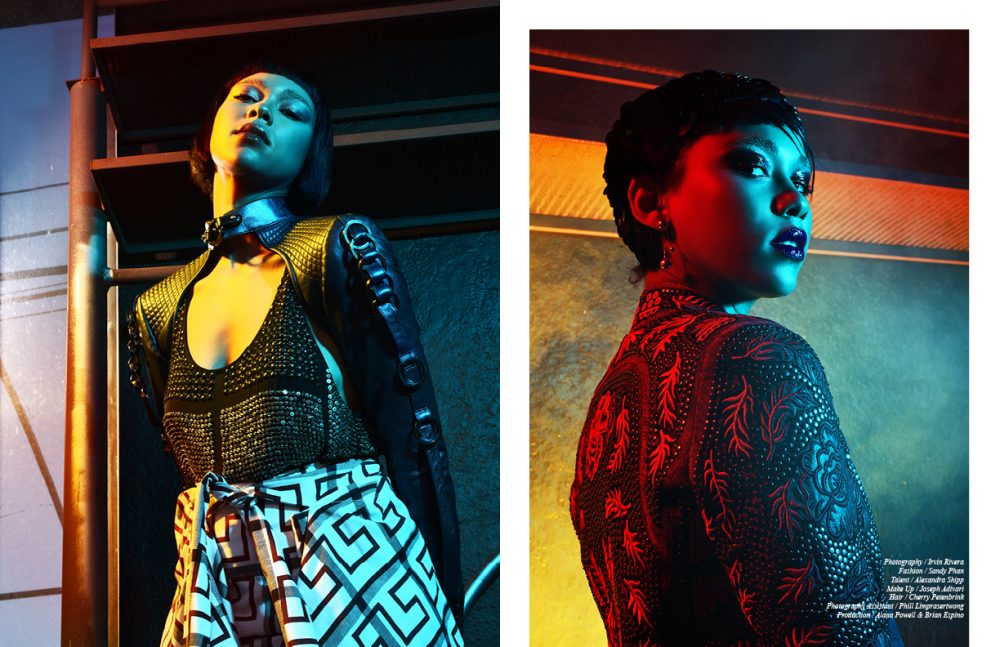 This movie made an important move for representation within the film industry, with Shipp being biracial and Hildebrand being openly LGTBQA+. Besides, Shipp has just announced that she’s set to play Abby Suso in the film adaptation of coming of age book Simon vs. The Homo Sapiens Agenda, which revolves almost entirely around LGTBQA+ issues. “I’m lucky I get to work on projects that tell real life stories about people from all walks of life,” she highlights. “Life isn’t just straight-Caucasian-happy family and I like to shine light on that. To get to do movies that inspire me and represent the underrepresented is a huge thing for me,” she asserts excitedly. Simon vs. The Homo Sapiens Agenda – a book that has reached cult following level – will tell the coming out story of Simon, played by Nick Robinson. “I think it is going to break your heart and renew your faith in humanity all at the same time,” Shipp promises us.

But probably Shipp’s most recognisable role to date comes from the latest X-Men Franchise. After getting a clean shaven head, Shipp first put on her bright white mohawk and ominous flowing cape in the 2016 X-Men: Apocalypse, the ninth film of the franchise. Shipp plays the powerful Ororo Munroe, most commonly known for her mutant superhero name Storm. You may remember this character from Halle Berry’s memorable performances in X-Men, X2: X-Men United, X-Men: The Last Stand, and X-Men: Days Of Future Past. Incidentally, Berry is Shipp’s own personal hero, being the first woman of colour to ever win an Oscar as lead actress.

However, Shipp’s storm differs greatly from Berry’s portrayal. Her character, a young version of Storm, a mutant with the ability to control the weather, is part of the villain group known as the Horsemen, set way before Berry’s redeemed Storm. Shipp’s take on the character has its roots in the comic book, not only performance-wise but also aesthetically, taking cues from the punk makeover in a 1983 issue.

Naturally, Shipp took to Berry’s archives when she first got the part but soon found out that the naiveté of her 18-year-old Storm ought not to be compared to Berry’s 30-something-year-old, thus fixating on the pages of the seminal cartoon. “I really wanted to show how she became this Halle Berry weather goddess and how that transition kind of happened,” she has expressed in the past. Shipp is set to reprise her role as Storm in X-Men: Dark Phoenix, directed and written by Simon Kinberg. The film will be the 13th in the franchise and it’s intended as the beginning of a new X-Men trilogy, with returning stars such as James McAvoy, Michael Fassbender, Jennifer Lawrence, Sophie Turner, and Evan Peters.

One thing is sure: Shipp wants to continue to stir things up with her performances. From giddily postmodern social media-obsessed high school serial killer, to badass weather-controlling superhero and perky comedic teenager – Shipp is crossing every genre dream role off her bucket list: “I just love playing someone who has lost their humanity no matter what genre it is.”