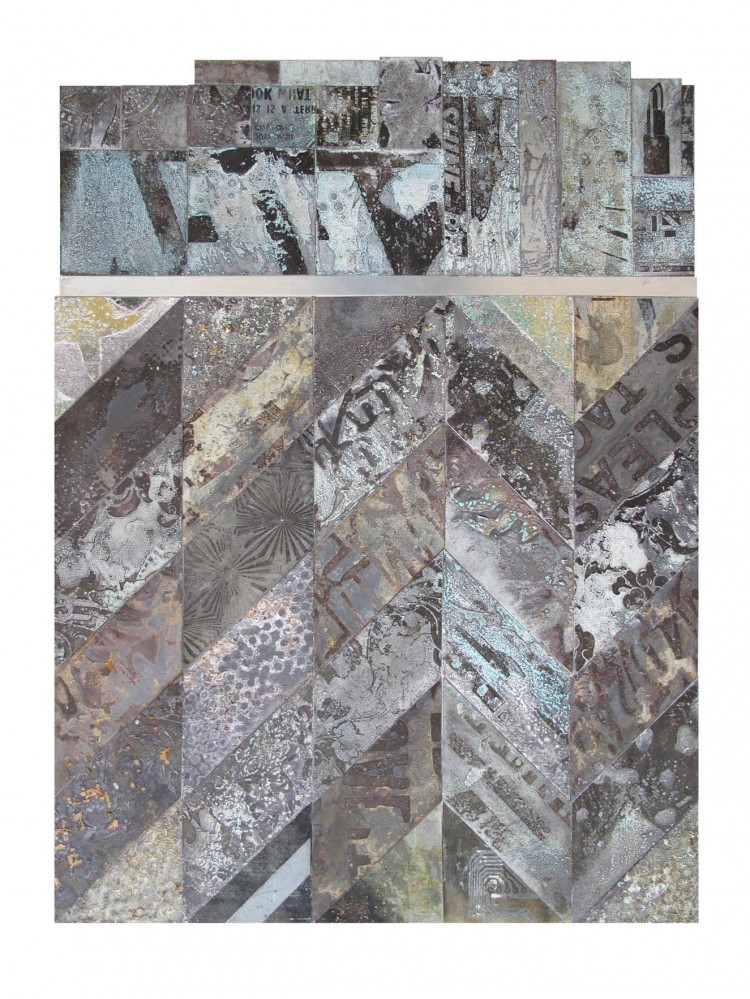 By finding beauty in everyday normality, Alaric Hammond perfectly exemplifies the role of an artist in the ever-changing modern world. His latest show, Caustic Windows at the Saatchi Gallery, explores the friction between communities on fringes of society and those in picturesque central London. As gentrification increases its hold on the capital, Hammond strongly opposes the social cleansing of the places where he used to live, celebrating the energy and grittiness that exists in these areas before overpriced coffee shops appear on every other street corner. Schön! caught up with the artist as he continues to make his mark by doing things his own way.

What are you working on at the moment?

I am opening my second Solo Show at The Saatchi Gallery in London and it is called Caustic Windows, open daily, admission free. Back in the studio I always have various paintings and print making in progress…

How has your work changed over the years? Are you always inspired by the same subject matter?

I enjoy the challenge of experimentation. That is the only constant, and the breakthroughs are usually accidents. I tend to resist repeating myself too much, lots of artists do because its better commercially to be stable or you might say predictable. To date its not been an issue for me, I’m constantly interested in what is around the next corner, I think when an artists really finds their voice they can take on anything, sculpture painting, printing, performance whatever, over time it all becomes one body of work… I’d like to think I’m getting there.

What sort of artistic training have you had?

None formally, I was obsessively drawing as early as I can remember I spent all my time drawing, everything and anything. By the time was 7 or 8 I was a full blown sci-fi fan and spent years working on city plans and complicated future colonies from other planets. I remember doing one on a roll of old wallpaper which probably took an entire summer holiday, everything has just developed from there really.

In this series of work you have almost created your own medium, how did that come about?

I was experimenting with traditional etching techniques and found that many of the plates I had basically messed up began to take on a wide variety of colours and textures, I thought they were more interesting than the printed results and set about understanding how I could use them. My goal was always to produce work that could capture the texture and feel of the city without necessarily being figurative, I had seen that done very successfully by other artists, these pieces have hopefully moved a step closer to achieving that goal more literally than I could in print or paint. 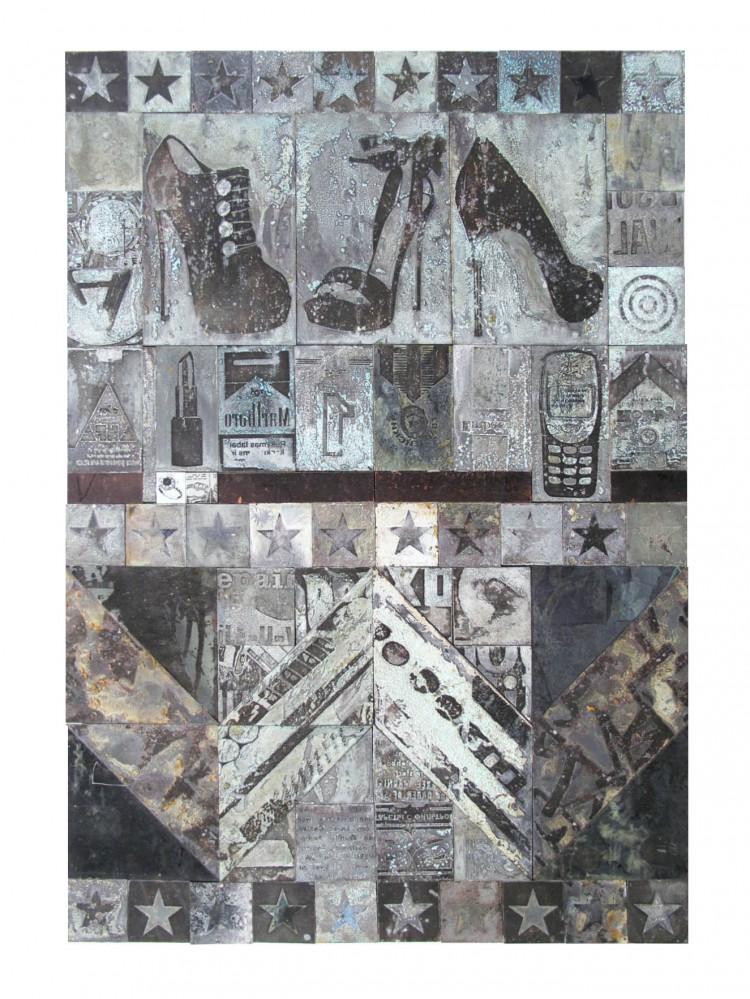 It can be a very direct means of connecting with the viewer, text can introduce gesture and suggestion, most often its an appropriation of the environment, could be graffiti on the bus stop, shop signs a text message we are surrounded by text all day everyday. I tend to not look too far for my source material, just what ever is in front of me.

How long do you typically spend on a piece of work? Do you focus on one at a time or have a few on the go at once?

Almost all the works on metal are assembled from much smaller plates produced individually and independently of one another. In the current show there is well over 1000. That is fairly time consuming and there’s a lot of waiting as the chemical treatments take effect and develop, but when I start to bring them together in what will become a final piece of work the majority of that process is usually very intuitive and spontaneous and can happen in a matter of minutes.

The Internet is where most people view art these days, how do you feel about people viewing pictures of your work online?

For me its not the best, the colours and textures in my works can be quite subtle, I need to post a lot close ups. The pieces I have made for Caustic Windows in particular are more objects than pictures, it is made to be seen in person. I feel there is, more now than ever, enormous value in taking the time out of daily routine to visit a physical space given over solely to creative expression and possibly seeing something completely unique, something new.

Like all other media the Internet it is ideally placed to promote sensationalism and spectacle. I don’t find a great deal of value in producing anything like that right now.

Gentrification is an extremely topical subject at the moment, would you consider your work to be a part of the political movement against it?

My work is definitely not ‘Political Art’ but it is possible to make art political. The issue is relevant to anyone who lives and works in our major cities because it puts so much pressure on everyone but the wealthy. Personally I will always find myself most at home in the areas considered down at heel. I feel less pressure there, by that I mean the pressure to ‘have’ rather than ‘live’. I feel more optimistic in these areas, I know I will find more like minded people and a wider sense of community, typically the local business will be young, interesting and diverse start ups or longer established family owned store just not the same impersonal corporate brands we see on every homogenised high street. I used to be able to get fruit and veg, even wine and beers on credit from the local Turkish shop in Hackney when I needed to. Because the guys knew me and I always paid them back we had trust and I never starved. That meant a lot to me and I’m glad to say they are still there, for now at least. I see the process of so-called ‘gentrification’ as the final stage in the urban life cycle, a precursor to death.

What do you think about London rents in terms of artists being able to make art?

Almost every Artist we celebrate as a ‘great’ has developed their formative works by the cheapest means possible. From Picasso to Banksy. Artists are drawn to low rent areas for all kinds of vital reasons and the resulting work is inseparable from the environment it was created in. So if you remove the environmental factors that foster artistic practice, the outcome is obvious. I think often there is a misconception that, in particular, contemporary art doesn’t take much work and somehow just happens! That is insane, producing art is a full time job and to start off it’s a full time that job that pays nothing. The wealthy tend not to be artistic innovators, if rent caps and similar initiatives that exist in other cities like Berlin cant be put in place to ensure that the city can remain a truly affordable place to live and work then the question is for policy makers, does London want art? 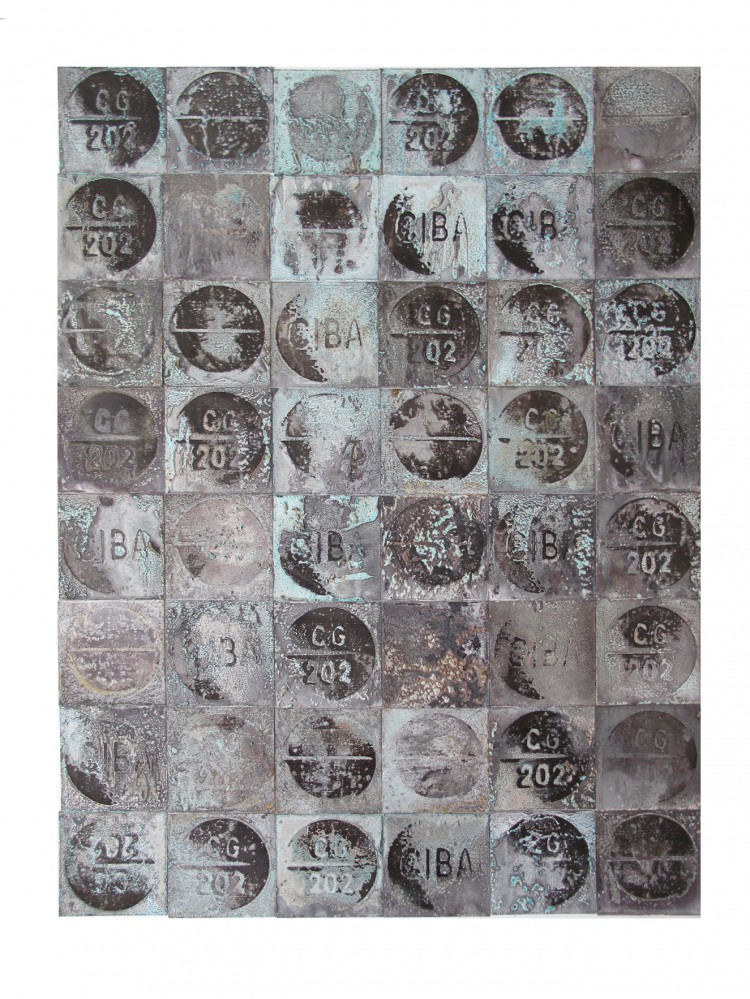 Mainly London, I’ve been under its spell since birth, My Grandfather started out in the late 1930s as a window cleaner from Stepney and he used to drive us all around as kids with a story to tell on every street, it’s home the best city in the world.

I find America inspiring, my favourite city there is LA yet I’m never exactly sure why, I always suspect a lot of secrecy up in the hills but its a very mysterious city plus I’m a huge fan Film Noir. Otherwise I’m not amazingly well travelled, I have lots of friends in New York and in Berlin too where there is a brilliantly optimistic energy, so I try to get over there as often as I can.

How did your exhibition at the Saatchi come about? What was it like exhibiting in such an esteemed venue?

I was invited by Curator Olly Walker to take party in a series of exhibitions being held at the Saatchi Gallery contextualising the inference of Pop Art on Global and contemporary culture. The gallery sold all my works from that show and invited me back, which is fantastic.

What plans have you got for the next couple of years?

I am happiest in the studio working, but now you’ve mentioned it I’m going to try and travel more!

What advice do you have for young artists?

Keep the work clean, find the most emotionally efficient way of making money besides selling art, that way you are free.