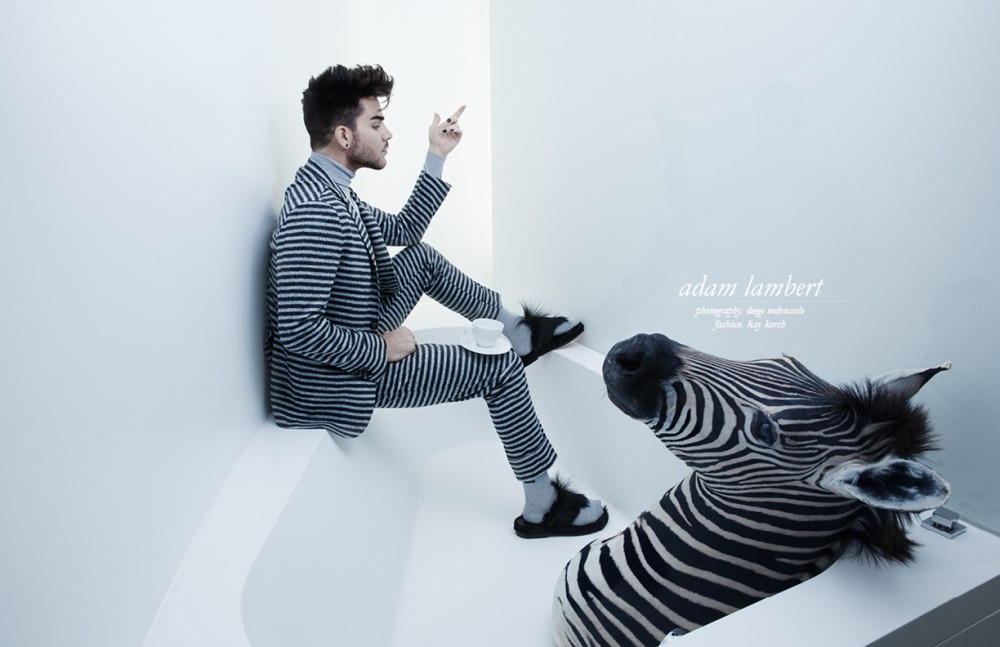 Adam Lambert’s trajectory is an astronomical ascent to pop superstardom. Coming from the West Coast world of musicals, the twenty-something Adam was jet-propelled into the spotlight with his American Idol performance, has subsequently been inscribed into musical history with his startlingly on point alliance with Queen. Mr. Lambert is a founding stone of contemporary pop culture. With a brief hiatus since his last 2012 album, Trespassing, 2015 saw him return en force with a brilliantly eclectic album, The Original High. Whilst he tours with Queen, we catch Adam on his way to Rio, juggling album promotion and a mini South American tour. Schön! talks candidly with the gent – fresh from his pas de deux with Mitsy (a very stubborn Zebra) – to discuss Hollywood, Saint Laurent Cuban heels, growing up, and the gay accolade.

How is the album faring?

Really well, I’m excited about it. This one seems to be radiating.

So what’s the story – you collaborated with Max Martin and Shellback on this album – what kind of direction did you have in mind when you approached them?

Max did What Do You Want From Me, which was my big first single, and Shellback did the follow up song. It worked the first time; I’m a big fan of their work. It’s great glossy pop and from my experience with both of them the first time they really know how to produce a vocal really well too.

I had a demo called The Original High that I actually played for them, an earlier version of that song, and they loved it.

It still has a pop core – was that important to you?

I want my songs on the radio, I want people to hear them and those two guys really know how to do it. The other thing that was nice about that was that it allowed me to relax a little bit.

When we sat and talked, The Original High was kind of this jump-off song, this sort of melancholy look at the first time you’ve done something and how it never compares the second time. I didn’t want to do bubblegum; I didn’t want to do campy and theatrical – I’ve done that. I felt like I had done crazy and I was ready to get real on this album. 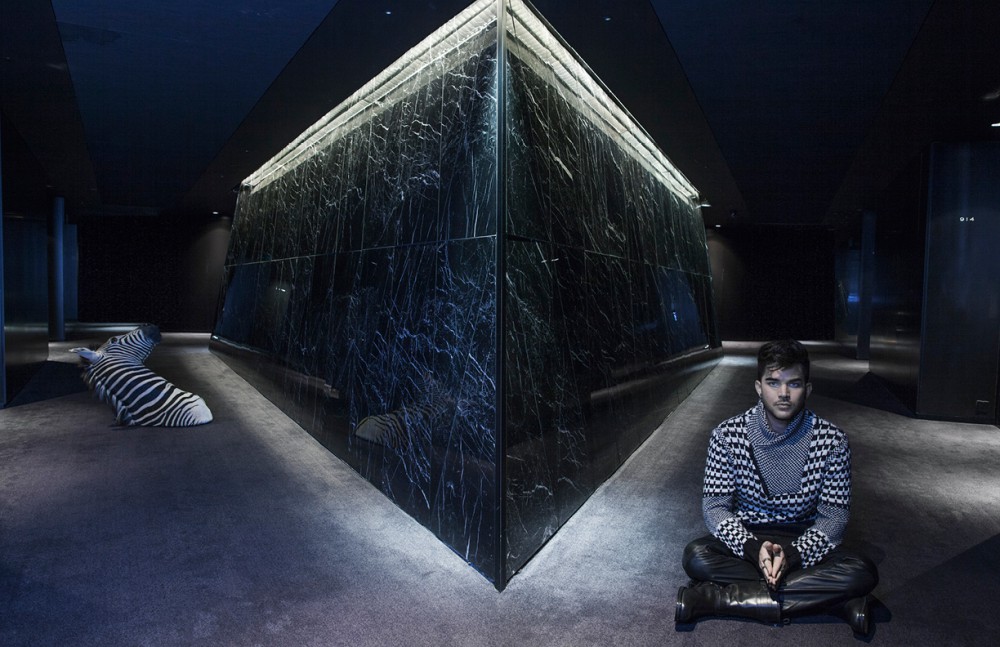 On the topic of narratives within the songs – are they real life scenarios?

Definitely. I’m pretty social. I like to drink, I like to go to clubs; I like to dance. I lived in Hollywood for 15 years and it’s an interesting city: on one hand, it can be very glamorous and full of fantasy and possibility and you’re always meeting beautiful people. But the flipside of that is that it can be very false and very hollow. I kind of wanted to talk about the dichotomy of that in the songs.

Before I started working on the album, I had some months off. I was just chilling, I didn’t have any work, I was being a normal person, or as normal as I can possibly be. Hanging out with friends, dating, this and that. And I started noticing that in a lot of my circle there was sort of a general feeling of disillusionment. The vibe, to me, felt like you know who you are now, the identity has been hammered out and now you get to this point in life where you’re like “what do I want? What’s going to make me happy?” as opposed to just “what makes me feel powerful?”. You come to have different goals as you grow up.

It’s like a shift in life philosophy, almost…So how did you go about working on the vocals in the album itself? What was the recording process?

I started in Stockholm. I was supposed to be out there for a month and it turned into two months. There was a group of young writers and producers called the Wolf Cousins out there and they are literally in a wolf’s den, underground. I didn’t have a social life in Stockholm, so I was alone a lot. It was good for the album. I think it put me in the right headspace for it.

Where does it sit, in comparison to your other albums?

I think it’s a lot more cohesive. The first album was kind of like me guessing. Coming off American Idol, no one really knew what it was going to be for me so it was sort of a guessing game. I wanted to do a modern ode to glam rock and it was a lot more theatrical and all over the place. I think this one is more focused and it feels more grounded. I feel, as a performer, more confident than I ever have in what I’m able to do. 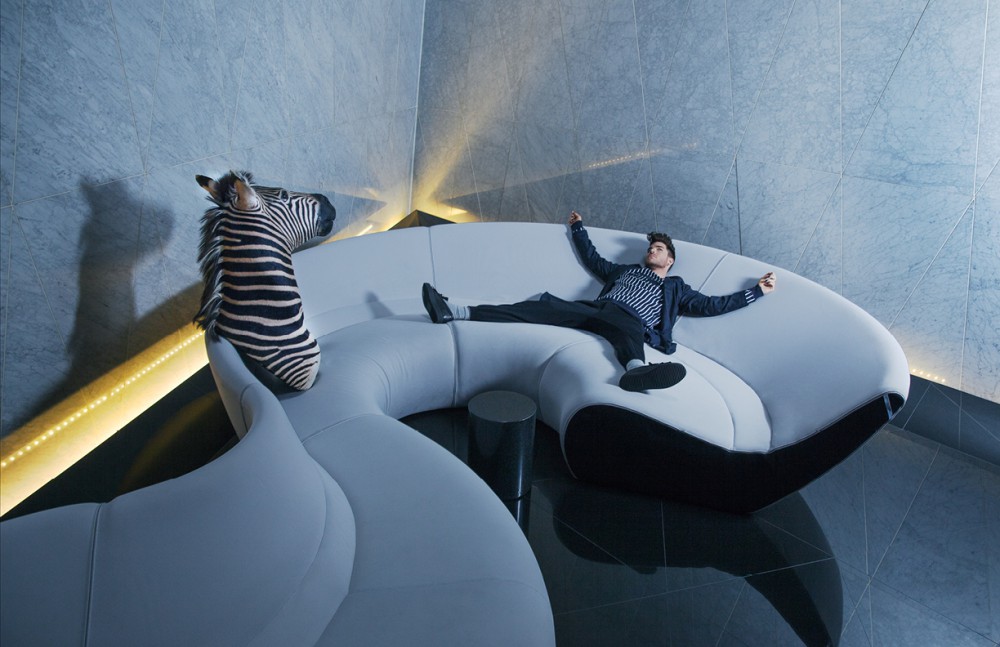 How did the album tie into your work with Queen?

It was like a back and forth thing: I was alternating. So it actually worked out really well. During that time I had this demo of a song that I played for Brian May and I said, “Do you want to play guitar on this?” and he said, “yeah”. So that was exciting. On Lucy.

I guess one of your climaxes with Queen, in London anyway, was your New Year performance. Which just blew up!

It was just so much fun. When they told me that we were going to get to do that I was, like, “really?”

[Laughs] The second thought was “What am I going to wear?” Literally I was like, “Red, I’m feeling red this year.” Red for New Years, festive!

You’ve had plenty of the Freddie comparisons. But what have you learned from Freddie? What has he given you?

When I watch the old footage of him, I am just blown away. He was just so free onstage. I don’t think it was super planned out in his head.

When I was approaching the concert it was really intimidating because I didn’t want to ever feel like I was imitating him. I felt that would have been kind of tacky but I was certainly paying attention to what was his intentions were. Both in his songwriting, and in the delivery of the songs, and in his stage presence. 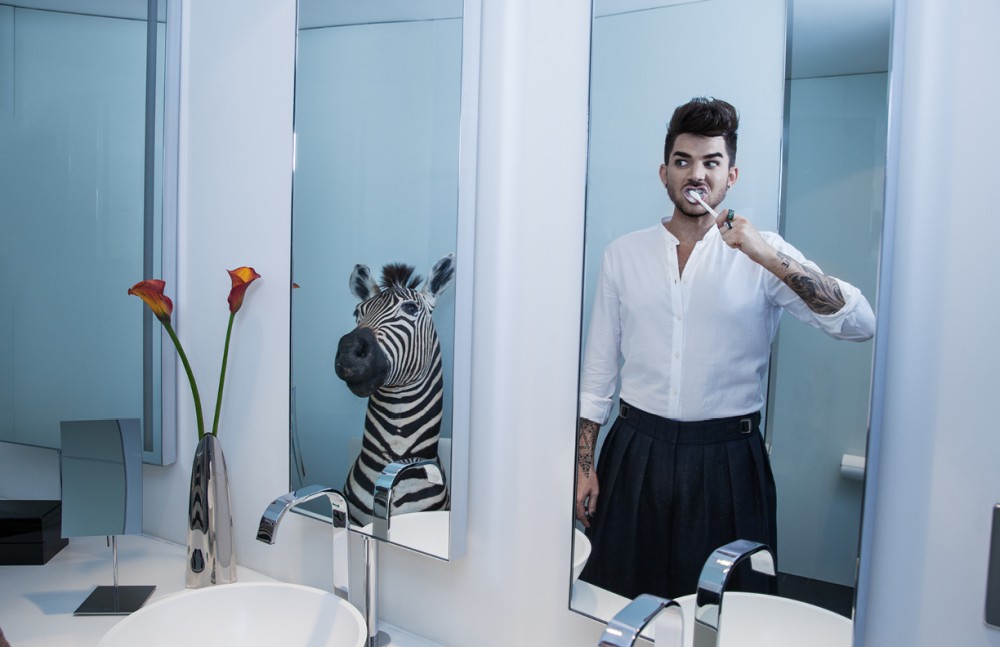 You have this amazing energy with Brian May and Roger Taylor on stage. What is your relationship like?

They’re great. It’s a family vibe. It feels very comfy. I have the utmost respect for them and I go into rehearsals and into the show feeling like I’m so lucky that I’m their guest. They’ve created amazing songs and still want to play them for their fans. Why shouldn’t they be able to tour? We’ve really honoured Freddie. There are sequences in the show when he’s onscreen and you can hear his voice. Let’s celebrate this guy who was such a fucking icon!

And he’s not over yet. He’s still got stuff to say and this is a way of giving him that voice.

And keeping the songs alive! They’re supposed to be played live, especially that kind of music. The recordings are genius.

Brian has said you have really changed and evolved as a person over the time you’ve been working with them. Does that feel like a compliment?

I think he just saw me grow into everything a little bit. When I met them for the first time it was all just happening. At the end of American Idol, the finale, we performed together and it was all new to me. All of a sudden I had a name. Now it’s been six years, I feel like I’ve got my feet on the ground.

Aside from the Queen bonanza, you’ve had sort of a personal evolution, style-wise. You’ve really stepped up your fashion game.

I think it’s the same thing as like the singing. I think I just started paying attention more to fashion. I started studying more. Really looking at editorials, looking at collections, understanding trends a little bit better, understanding what I wanted my style to say about me.

I want your shoes, by the way.

Oh the new Saint Laurent! They are not comfortable. They are not meant for walking. I was in Paris a couple of days ago and I went out with a friend and I was wearing these. I felt real cute in my outfit but, fuck, I was like “note to self: need insoles for these.” This is a standing shoe, not a walking shoe. 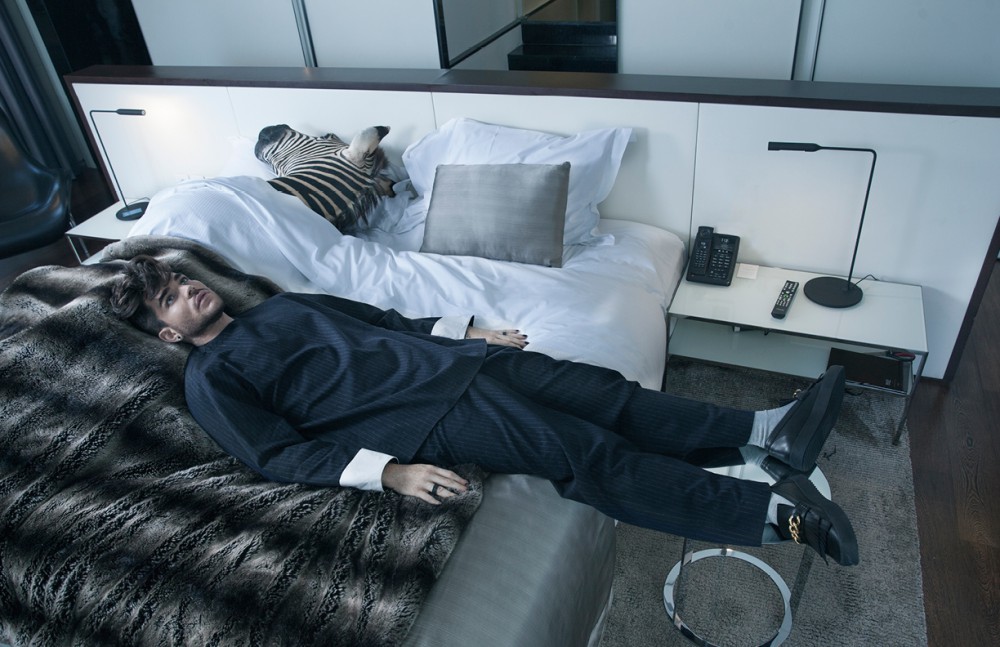 Going back again to pre-Queen episode, when you came to the world and pop industry, people were quick to give you this accolade as the “gay artist”. Has that been a burden or an important part of your career?

It’s been an interesting journey because I came out of the closet when I was eighteen. I come from a very liberal family, I was in theatre, so it’s never really been too much of a struggle for me. I was very comfortable with it once I came out.

All of a sudden I go on this show and there was never a line on the questionnaire, “What’s your sexuality?” I would never have hidden it, but it never came up. So afterwards, I did the Rolling Stone interview, which was branded “Adam’s coming out”. I was like, I’m already out! I’ve been out for a long time. It was a weird experience because it’s a crash course in what celebrity is. On how people decide how they want to see you and media can tend to project what they want to onto you. I had to learn really quickly what it was all about. In that regard, there were moments where it felt like a burden, but it also felt like a great opportunity to help educate people and to help breakdown some stereotypes.

Isn’t that a huge responsibility?

It felt a little scary at moments. But then, at other times, when I would meet a fan, who would come up to me and say: “The fact that you are just being who you are and not making apologies has done so much for me.” That was where it started to feel like, you know what, this is way bigger than me. It’s exciting to be at this tipping point in culture right now. 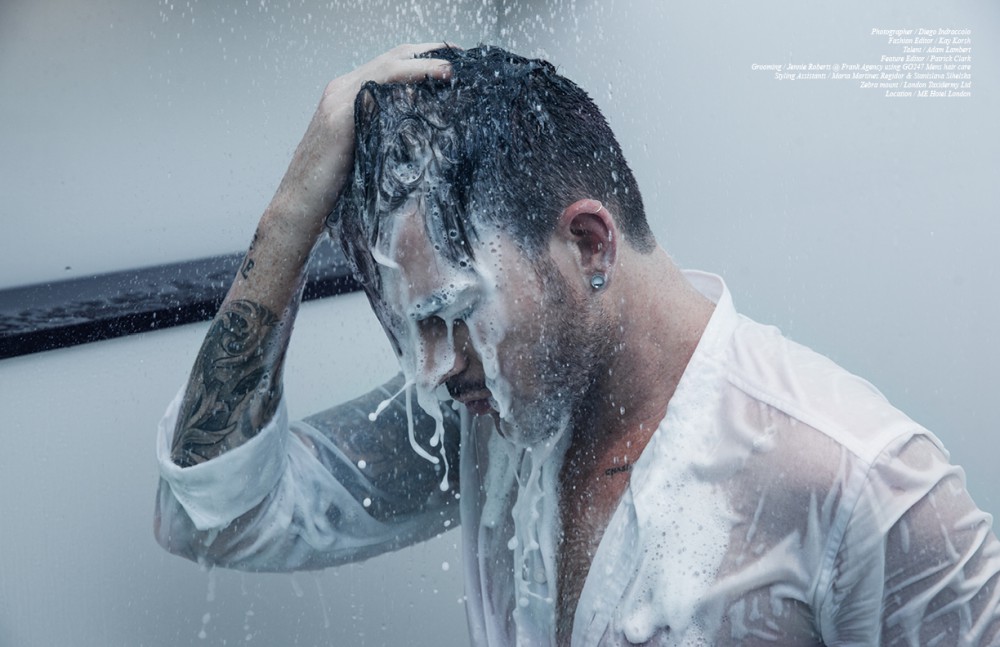 Your honesty and openness is what your fans love you for…

I would hope so! There’s definitely a connection and it’s interesting because I’m meeting more and more gay fans as well… I was really extreme looking before and I was playing with all this makeup, which I was having a great time with, but I think it was almost a response to everything. I think that some members of the gay audience might have looked at that and kind of gone, “bleurgh”.

Harshest critics out there…

We have our own shames that we deal with as a community and maybe that was just not what they were identifying with.

What do you think the greatest misconception about you is?

I don’t know anymore. I think I’ve tried to put it all out there. I think when you wear eccentric clothing and you perform confidently on stage it’s easy to assume someone is an asshole or a diva, and I don’t think I am. I’m sure I’ve had my moments, but I think I’m pretty friendly.

You’ve never asked for a bowl of blue-only skittles, then?

No, never! [Laughs] But actually, when you’re on the road it’s really hard to stay healthy with your food. In LA we’re so spoiled with all the vegetarian cooking. I get a little bit crazy about that. I don’t bitch anyone out, that doesn’t happen. Honest!

Another Lonely Night is out November 13th. For more information and up-to-date Adam news, click here.