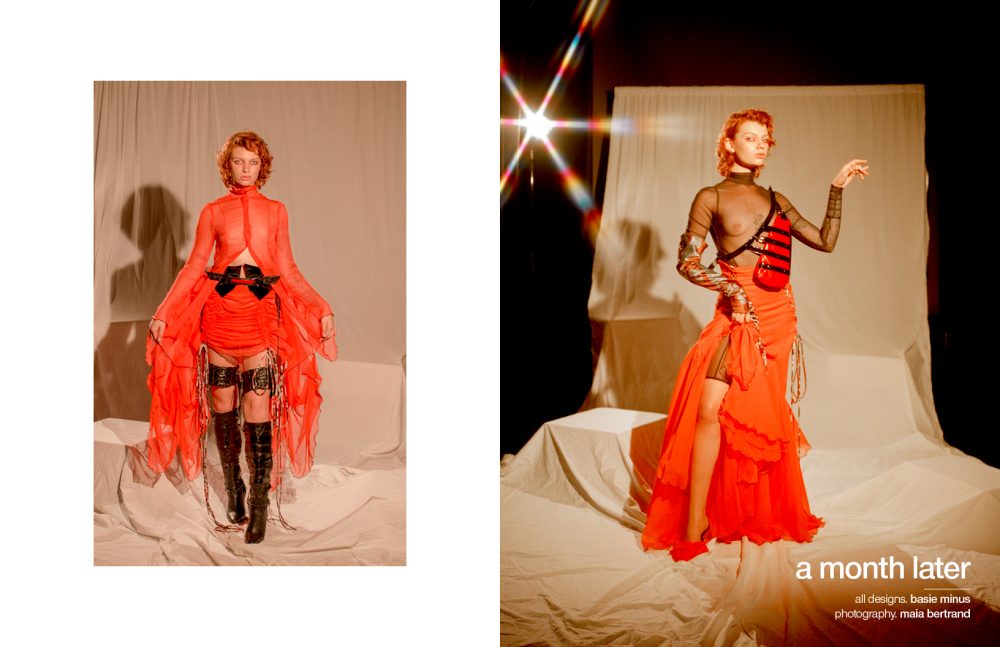 Drawing inspiration from Stanley Kubrick’s The Shining, designer Basie Minus presents “A Month Later” — a photo series featuring her latest collection of the same name. Following last year’s “Poetry of Decay,” “A Month Later,” photographed by Maia Bertrand, presents Minus’s take on unreality – a hazy, uncanniness imbued with the mania that made The Shining so memorable.

Minus is a Texas native, moving from San Antonio to Savannah, Georgia, to study fashion design at the Savannah College of Art and Design. Having just completed her final semester earlier this year, “A Month Later” is a striking first entry for her post-graduation career – blood reds and corals layer and merge, referencing the concealed madness that so intrigues Minus as a designer. Alongside the photography by Bertrand, Minus has not only built a collection but a world. Here, Schön! speaks exclusively to Minus about her most recent collection. 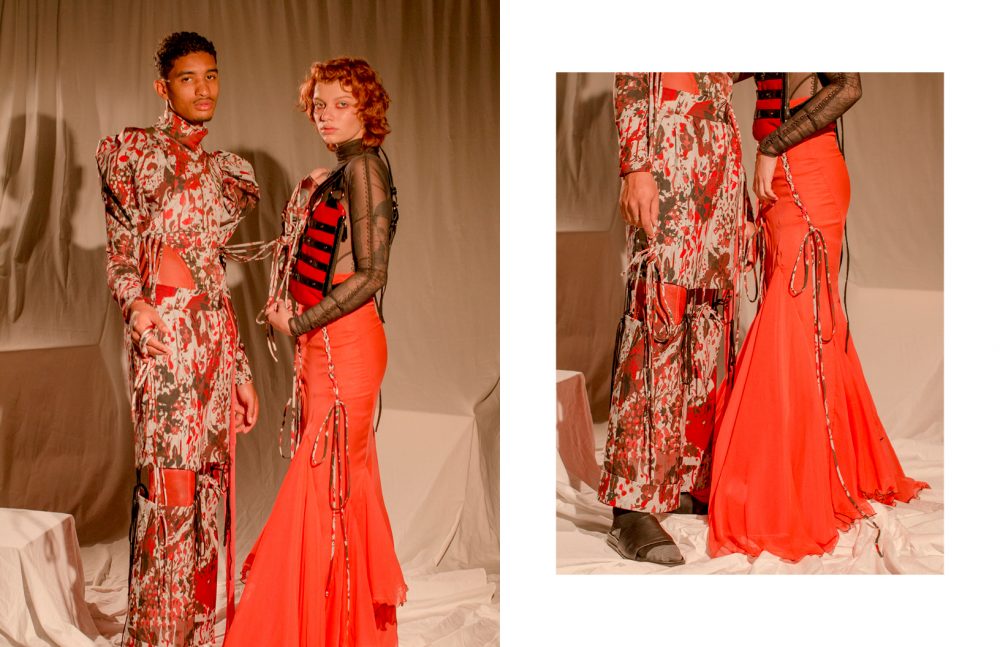 When did you begin as a designer?

I began sketching when I was about eight years old in the third grade. Watching the Spice Girls was actually a huge influence on me with pop culture. I would also go through my mom’s closet and dress up several times a day.

You briefly spent time in Hong Kong. How did that experience impact your designs today?

I had the opportunity to attend Art Basel, which was a huge inspiration for me and still is to this day. Seeing all types of creations made from different mediums, as well as the Louis Vuitton Time Capsule and a fashion history museum filled with costume designs influenced by many different parts of the world. I also did a fashion shoot called “Heightened Daydream” in Shek O Village, Hong Kong, which impacted how the stylist and I went about coming up with outfits.

Antique shopping in Hong Kong was one of my favourite things to do. The stylist, Sophia Lewis, and I love to use strange props in our shoots to help with the imagination of the concept – such as an old scuba diving mask as a “purse” or 4D reading glasses in the shape of rectangles. 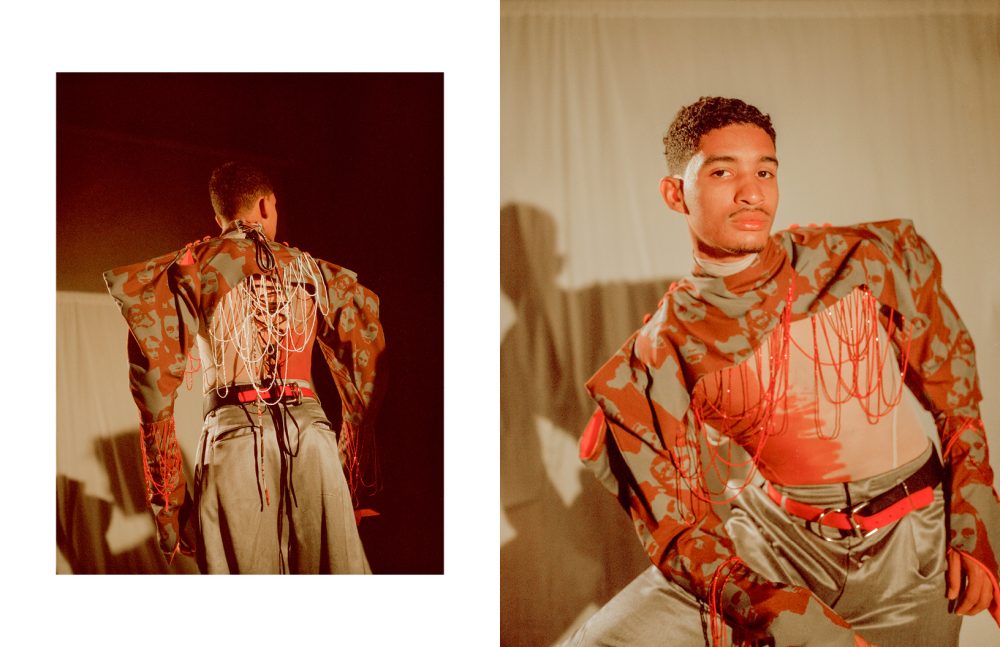 What fascinates you about psychosis?

The idea that people believe someone who is psychotic is not “normal”— however, the person who is psychotic thinks that what they are doing is “normal.” Perceptions of someone with psychosis becomes distorted, and a person can’t recognise what is real and what isn’t. I guess I sort of… I don’t want to say “admire” but appreciate this idea of not being able to distinguish what’s real from what isn’t. I appreciate unreality.

Colours in your previous collections were largely muted, and pieces were generally designed in singular hues. What inspired the shift to the colours, textiles and textures we see in “A Month Later”?

I do love muted colours as well as designs full of colour and prints, or even mixing the two. I think what initially inspired the shift to colours of red and coral hues was finally getting the chance to collaborate with someone in fibres. I really wanted to push the boundaries within print and colour with my collaborator, Carol Cone. Print and colour tell more of a story within my concept.

Cody Marrapode also dyed the blood mesh bodysuit and did a lovely job. We both thought it would be fun to dye this piece instead of just ordering a digital print; to give the collection variety in fabric manipulation. The beading was also a colourful and sparkly element. My beaders, Elise Engles and Jon Pulse, did marvellously, making the beads drape how I envisioned. 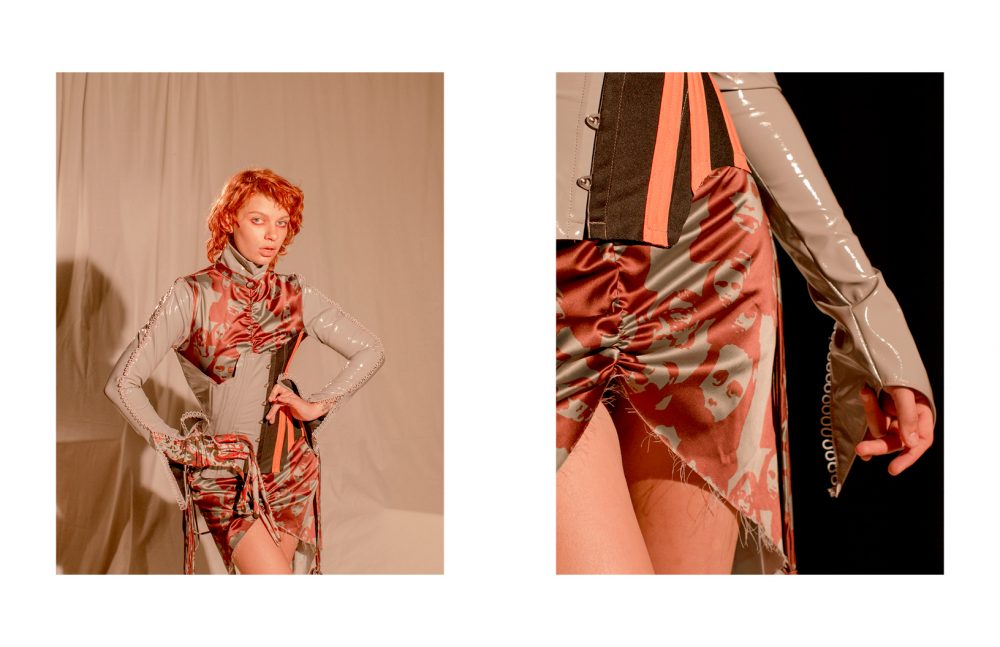 Besides the name, where else did the influence of The Shining make an appearance in this collection?

First of all, the gloves with extended fingers within my collection have to do with Jack Torrance’s elongated toll of becoming insane, and the anticipation of what he is going to do next in the film.

The print inspiration comes from the gallons of blood pouring from the elevator, the blood splatter of the twins on the floral wallpaper and other scenes. I collaborated with Carol Cone and she accomplished an amazing outcome with what I expressed as my inspiration. We contacted each other back and forth many times until we felt the prints were just right. She is a wonderful collaborator and fully understood my direction and ran with it.

What are some of the visual inspirations for this photo series?

I was thinking sort of a dream-like, hazy state for this shoot – that sense of unreality having to do with someone who is in a state of psychosis. I tried imagining what it would be like to enter the mind of someone psychotic, but with an innocent take on it. 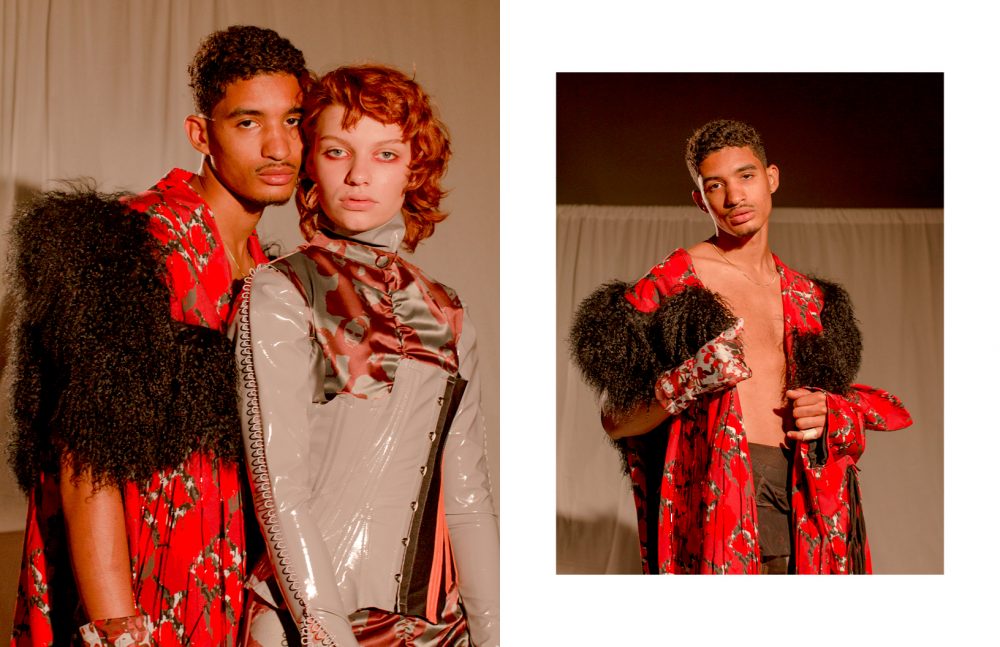 How did you coordinate your team for this photo series?

I pretty much told my team to think psycho, but more innocent. I also like to ask for my team’s input because I want everyone to be satisfied with the outcome of our work. I have always worked with Sophia Lewis; we met each other our first year at SCAD just from living next door to each other and became very close friends. She is one of the best stylists I’ve ever seen and friends I have ever had. She knows what to do with my garments within minutes and she knows how to expose my creations in an eccentric way, and I love that!

Lucia Marti, my jewellery collaborator for my senior thesis collection, connected India Cohen and myself for accessories. India’s work complemented my garments wonderfully. I found the photographer, Maia, through friends of friends. I looked at her work through Instagram and realised her creativity gave that dreamy effect, and I wanted to tie this to the concept of psychosis. I found my models by meeting them in Savannah. Roy was definitely a trooper through the photoshoot. He had a broken finger from playing soccer, yet pulled through and did an awesome job. Emily is one of the best models I’ve worked with. She is always there for me and is so powerful when in front of the camera. 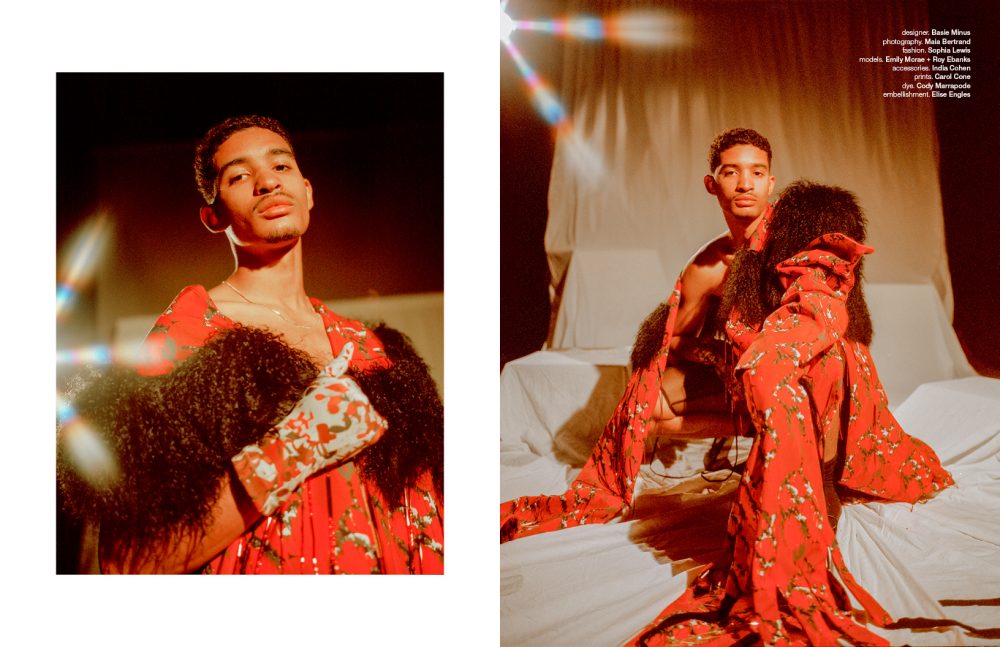 What’s the most helpful advice you’ve ever received?

A professor told me that you’re always going to think someone else’s collection is better than yours, but don’t believe it. Each and every one of us has a different mind and a different vision. Fashion is about freedom, not rules.

What can we look forward to from Basie Minus in the future?

To see myself grow as a designer and work with new people. To keep pushing beyond the norm, and by doing so, discover new concepts!