Tsumori Chisato’s new collection was colourful and full of sparkles. Jackets with melted illustrative textures were paired with nautical skirts in a mélange of colours. An ink blotted blue and purple asymmetrical top harmonised colourful shorts that spoke of map contours. Vibrant bags and playful shoes and sunglasses gave us something to daze about, as well as oversized rain hats to finish off the look perfectly. Quirky Chisato proved that she is full of bright dreams and psychedelic wonders.

German fashion designer René Storck showcased his new collection of crisp, elegant staples in shades of white, dusk rose, and navy. In a series of classic button up shirts and clean-cut blazers, Storck’s collection exuded perfection in tailoring and fit. Skirts were light and ethereal, while double-breasted jackets combined boyish elements to traditional feminine silhouettes. The designer demonstrated his enthusiasm in pristine female form by utilising Japanese raw denim and cotton twill, moulding these fabrics in a timeless fashion.

We were transported Véronique Leroy’s innovative interpretation of the 1920s in her Spring 2015 Collection. The show started off with boyish tailored dresses, matching skirts and tops in beiges and blacks. Patched pockets in skirts, blue jackets and pants all projected a 3D effect. Oversized chains hugging on the neck line weren’t the only accessories that Leroy was pushing out this season, bags that folded so beautifully were a refreshing feature on the catwalk. This collection contained some risk-provoking moves, although overall both a different and interesting sight of work for the designer.

Even though Amanda Gerbasi studied languages and architecture, she eventually found her passion in jewellery design: Kattri was born. Her architecture background has influenced her aesthetic, as geometric shapes and sleek structures are seen throughout her second collection. Inspired by a math exhibition at the Metropolitan Museum of Art, Gerbasi decided to create a pragmatic vision of jewellery. “Jewellery design is very mathematical. Sometimes I have to send gems back to be cut one millimetre,” Gerbasi explained. The designer utilises ethically sourced gemstones cut in Brazil, then produces all her jewellery there. In her creation process, she sculpts jewellery in such a way that all angles of the gem are visible. To begin, Gebrasi designs her ideas in 3D on the computer. Then, the jewellery is first cast in halves, and subsequently laser joined together. In the end, she has a beautiful and almost scientific collection of “molecular” shaped jewellery. If Gerbasi can succeed in making DNA strands look luxurious, there’s no stopping her in future endeavours.

Tsolo Munkh returned this season in a stronger attempt to make her extraordinary creations more wearable. The Mongolian designer focused on a myriad of separates that highlight sophisticating netting with leather threads woven in and out. Light, slightly ruched dresses of taupe juxtaposed Munkh’s signature armour-like jackets. Time and time again, the couturier demonstrates incredible hand craftsmanship in leather and chainmail detailing. She dipped into deep oranges this season, adding a kick to her overall black collection. Munkh provided statement pieces, including dresses that marry leather and silk. 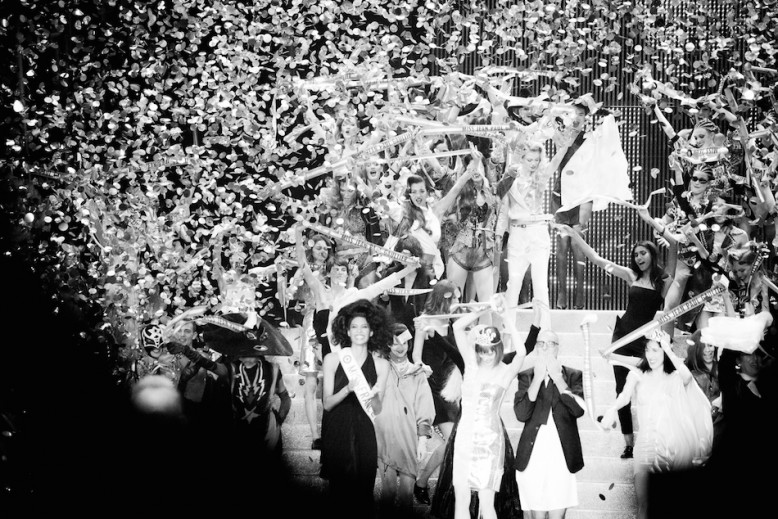 Set in Le Grand Rex, Jean Paul Gaultier hosted his farewell as a stunning beauty pageant. Setting the scene as the election of ‘Miss Jean Paul Gaultier 2015′, the collection was divided into several different themes which included ‘Miss Femmes de Footballeurs’, ‘Madame de Palmay’, ‘Miss Météo’, and ‘Miss Lucha Libre’. For us at Schön!, the categories ‘Miss Redactrice de Mode’, ‘Miss Smoking’, and ‘Miss Tour de France’ were the most impressive examples of Gaultier’s creativity. Dresses shimmered underneath the spotlight, while elegantly tailored ‘smoking’ tuxedos demonstrated the timelessness of the couturier’s designs. Photographer Ger Ger was at the scene to capture the climactic moment on camera.

As the crowning moment dawned on the next beauty pageant queen, Schön!’s very own Issue 21 cover star, Coco Rocha, “fainted” as she was announced the next ‘Miss Jean Paul Gaultier 2015.’ Amidst an explosion of glitter, the grande finale was as opulent as it was excessive, and seemed to summarise the spectacularity and extravagance that Gaultier has been come to be known for with his prêt-à-porter collections.

While we are disheartened that Gaultier has discontinued his exciting ready-to-wear shows, we very much look forward to what he will conjure up for his haute couture collections.