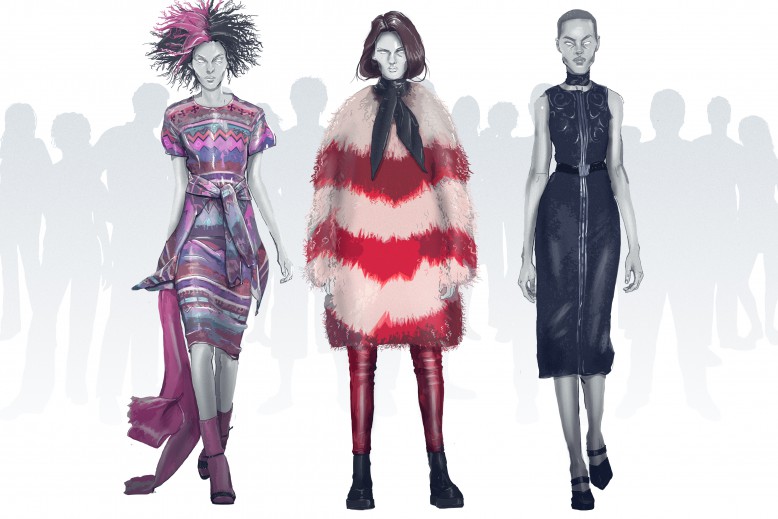 London’s weekend of shows had plenty of substance to keep an eager crowd of spectators entertained. Not only experimenting with surfaces, but also focusing on textural combinations, with anything from latex at Sibling and Phoebe English, to Mongolian furs at House of Holland, the shows fused visual narratives with the very construction of the garments. Schön! reports from the weekend of shows.

A tribute to 1980s era of punk ran throughout the Sibling collection, aptly titled Call Me. Hints of sex shop shine were introduced with latex pieces, while mismatched layers added depth and complexity to the intricate knit pieces. With a colour palette inspired by Francis Bacon and Verner Panton, the Sibling woman was a sophisticated vision: as arresting as she was alluring.

Julien McDonald conjured up a storm with a front row of pop culture’s favourites for his autumn/winter 2015 show. Opening on opulent black looks, that combined leather pieces with intricate embroidered details, the collection then moved onto signature lace looks, with tassels and appliqués a-plenty.

An expedition to an idyllic scene was orchestrated at the Markus Lupfer presentation, where floating florals were set against uncompromisingly saccharine silhouettes. Bold jacquards, ethereal metallics and pared-down pleats had us enchanted, while animal prints added a charmingly pastoral touch to the pieces.

Henry Holland set the catwalk in motion for his House of Holland show: with models taking to the road on a conveyor-belt-cum-runway, street urchins clad in beautifully chaotic tartans and textural Mongolian furs appeared from a forest of scaffolding. A whimsical take on contemporary urban lines, the collection was fast-paced, textural and pop-infused.

True to his core aesthetic, David Koma’s architectural style was alive and kicking at his autumn/winter 2015. Koma expanded his habitual aesthetic, however, with flared pieces, figure-hugging dresses and flowing forms. Meshed looks and sequins added a distinctly baroque feel to the collection, making Koma’s collection as ornate as it was opulent.

palmer // harding took inspiration from the series In Between by artist Julia Fullerton-Batten, exploring the chaotic possibilities of adolescence through whimsical silhouettes. Striking a balance between the severe lines of womanhood and the more frivolous graphic embroidery, the palmer // harding duo presented a particularly elegant collection, that displayed a reserved sense of maturity.

This was the first season that Issa presented under the creative direction of Jamie O’Hare, and was as bold a start as it was graphically daring. Fluid fabrics played with hints of bare skin, while contrasting prints with sultry fringing: fashioned for an evening of elegance, the gowns were sleek visions.

An aesthetic reminiscent of Tadao Ando’s designs was seen at Amanda Wakeley, with textural contrasts beautifully orchestrated through the use of cashmeres, mohair pieces and quilted satin twill. Cocoon volumes added warmth to the collection, making the pieces as regal as they were beautifully constructed. Other than the stately warrior-like dress, combinations of wide-legged trousers and woollen jackets were particularly delectable.

Bikers took to the skies at the Belstaff presentation, where the expansive cloths of parachutes filled the space. Alongside signature leather jackets, woollen overcoats were layered on round-shouldered silhouettes. The outerwear pieces played with the voluminous effects of bomber-jackets, whilst beautifully staging textural interplay.

A rollercoaster ride in terms of the aesthetically eclectic collections, London Fashion Week offered a weekend of inventiveness and textural experimentation.