The fourth day of Paris Haute couture Fashion Week focused on narrative storytelling in the most unexpected ways. From Franck Sorbier and Jean Paul Gaultier’s haunted vision of couture, to Viktor & Rolf’s transformation of the red carpet, this day truly stood out as one of the most imaginative moments in this week of shows. We also entered the universes of VASKOLG, Coppélia Pique, Elie Saab, Rad Hourani, Georges Chakra, Adeline André, Bowie Wong, Antonio Ortega, and Defined Moment.

Franck Sorbier created a poetic vision of romantic sorrow and passionate longing in the atmosphere of Salle Wagram. In an opulent set, French singer Émilie Simon opened the show with a haunting piece that further carried us to an otherworldly set. Spectators, separated into four categories (Delacroix, Mahler, Klimt, and Rimbaud), applauded generously throughout the show as one by one, models emulating nineteenth-century women wandered throughout the intimate boudoir. Sorbier’s woman wore passionate reds and midnight black, in the form of lace and cloaks. Full of enchantment and fantasy, Sorbier’s Poems collection spoke of romanticism of centuries gone by. The final dress, in a captivating ivory tone, floated ever so gracefully, like a phantom in the night.

Haute Couture jewellery line VASKOLG showed an experimental collection, driven by the designer’s internal ecological curiosity, through a passionate rendering of the inexplicable. The designer did not hold anything back, crafting statuesque necklaces out of contrasting materials such as onyx, roses, feathers, pure ceramic and modern technologies…even a USB key. A strikingly controversial piece was a transparent breast pump in the shape of a fish bowl, with a live fish swimming inside.

Axelle Migé, a young graduate student of Paris’ École Nationale Supérieure des Arts Décoratifs, and the designer of Coppélia Pique imagined a holy realm of billowing forms marked with magnificent mosaic details for their first Parisian Haute Couture presentation. Fusing creed with couture, Migé blessed the catwalk with cassock-like garments. Geometrical bodices were crafted with mirrors to evoke a celestial, unearthly quality similar to the sculptural works of the collection’s muse, Niki de Saint Phalle. The poetic collection was awakened in an intimate corridor of the Saint-Eustache church; an apt setting for a biblically-inspired presentation, that boasted decadent gowns painted with gold and silver foil, voluminous feathers, resin, shells and pearls.

The first model appeared through a series of glowing chandelier lights. Swimming underneath an iridescent surface of pearls, the Elie Saab woman appeared as a vision both elegant and lighter than air. A series of lush fur wraps and scooped, cut-out backs on dresses emerged on the catwalk. As always, Saab managed to remain true to his aesthetic of sophisticated femininity while drawing inspiration from Paris, the city of lights, where all shines in majesty and prismatic reflections. 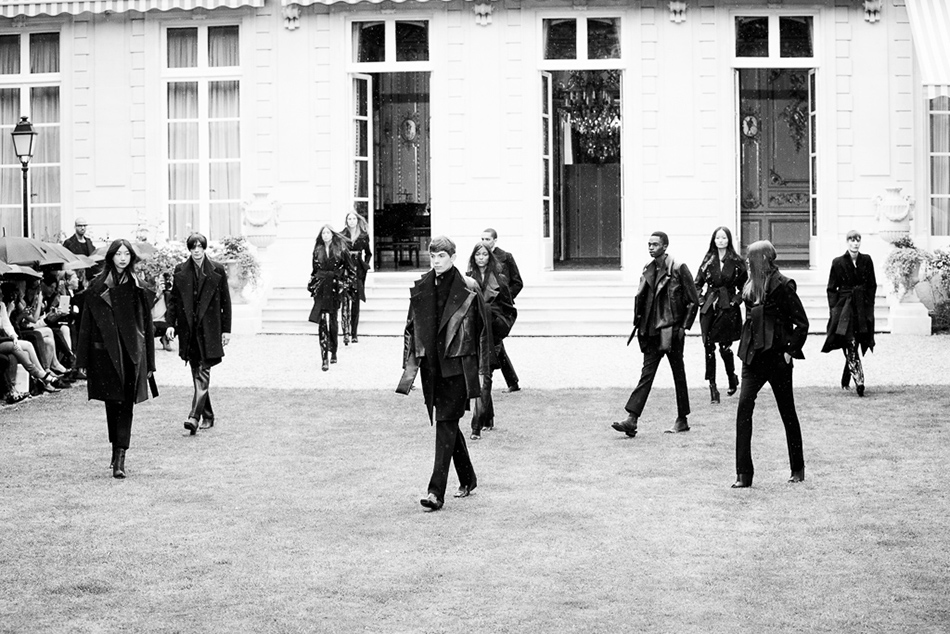 This season, Rad Hourani’s complex layers included kimono-wrap formations in tweed and jackets with multiple collars. The skilled layering created a dynamic effect, reminiscent the act of turning the pages of a book. Hourani somewhat shied away from the black and white he is known for, by adding touches of olive to large coats. Shimmering black sequins and silver threads were embraced this season as Hourani placed shorts over trousers, and oversized belts around sleek coats.

The curtains were drawn and candles were lit. Dahlia Noir entered the scene in black organza, and a pair of trousers in delicious crêpe. Hair boxed high with swipes of ruby shadow on the eyelids and crimson on the lips, the Jean Paul Gaultier woman was a vamp beauty. She wore black leather pencil skirts and sported volume in shoulders. The French couturier envisioned the darkest femme fatales, from Batgirl in mousseline blouses, to the Blair Witch in black and white tweed. Devilish sophistication oozed out of hooded figures and fur skirts, while a casual undertone was present in jogging trousers. Dracula met rock ’n’ roll in the most dangerously luxurious way, and you won’t be able to resist sinking your teeth into Gaultier’s collection.

Iridescent forms glistened down the Georges Chakra runway in hues of aubergine, gold and monochrome. Asymmetrical skirts flooded down the concrete catwalk while effulgent, caped gowns tangoed with lace underpinnings. A dramatically charged show, Chakra demonstrated an impeccable gift for draping and sensationalizing. His pièce de résistance, however, was a lace bridal gown inspired by 1950s fashion photography, imprinted with traces of wispy lace flowers and a matching headpiece and veil stemming from the model’s tousled braid. Romantic, nostalgic, and profoundly… Chakra.

When one thinks of couture, images of complex forms, hard worked material, and theatrics come to mind. Not in the case of French designer Adeline André. Her collection was the epitome of classic modernism and took the form of sleek, simple silhouettes of cream, moss, and deep blue. The ethereal nature of silk sleeves and evident stitching of a coat highlighted the scientifically precise method through which these garments came to be. It was as if André’s collection rolled off her sketchbook and onto the runway with fluidity and ease.

A trained stage and costume designer, and the son of a Chinese opera singer, Bowie Wong has theatrics running through his veins and his dexterous seams. His couture show, staged at the Australian Embassy in Paris, was a perfect testament to his roots as the show’s backdrop symbolised the Australian Aboriginal and Asian 18th century trepang trade. Fish hooks and loafs of bread hung behind Bowie’s designs, but did not detract from his electrifying métier: torsos and rounded capes were stamped with over-sized golden orbs and inky dresses were winged with birdlike feathers. Bulky silhouettes were softened with organza, and milky creations slowly revealed themselves to be ethereal gifts wrapped with a subtle thespian touch.

Designer Antonio Ortega believes in heritage, he believes in imbuing the universe of couture with his own vibrant, mythical and Mexican background. Presenting his first collection in Paris after a decade of shows in New York, Montreal and Toronto, Ortega unveiled 36 silhouettes propelled by a cross-cultural identity where fabrics mix and furrow to evoke a threaded narrative of metamorphosis told through overlapping translucencies, tattooed leather, fiber tinsel fashioned from eucalyptus pulp and infinite clusters of feathers. Ortega utilised iridescent fabrics of different hues, in a quilted pattern, to create a creature half bird, half snake, and altogether mythical.

Ageless beauty is a constant battle for society, but for Defined Moment designer Tran Thi Thanh Nga, it is a metaphysical quest that motivates her to uncover, through innovative textiles and metal threads, the complex grandeur of nature in its purest form. Nga’s three-dimensional designs were a whimsical homage to the makeup of our genetic code, like DNA, her collection was interwoven and intricate, fastened but gauzy, layered yet un-stratified. Fabricated out of a visionary knitting technique known as “Chaos Control” the thread is directed freely from its regular path toward a new direction. The visionary designer’s detailing made us dream of unexplored galaxies where beauty is forever and untouched by time.

It began with applause. Set to the steady beat of Steve Reich’s Clapping Music, Viktor Horsting and Rolf Snoeren’s collection unravelled on a plush red carpet at La Gaité Lyrique. It was precisely that tapis rouge which was intertwined throughout the line, with models strolling out in red sculptures, wrapped in various ways. Viktor & Rolf secured their signature, oversized bows in asymmetrical skirts and plush tops. Animal skin motifs – leopard, zebra, and giraffe – were completed in shaved and laboriously hand-appliquéd carpet, which took up to 300 hours per look to complete. The designers humourously answered the famous question, “Who are you wearing?” because really, you are wearing that star-studded red carpet.