This November, photography collective Heist is hosting its second exhibition of fine art photography. Appropriately titled The Road to Elysium, the show will feature artists from around the world, with pieces that encompass the idea of utopia and tackle social and political issues. Among these you will also find AES+F, a Russian based photo-conceptualist group who play with visual aesthetics so heavily that people have coined the term “animated sculptures” in relation to their work. Through photography, video art, animation and other theatrical mediums, their films take up themes based on a post-apocalyptic word, set in a distant future. The group took time to catch up with Schön! in this exclusive online interview, where they expand more on their part within the exhibition held at Heist, on their creative process and on upcoming projects.

Your group was initially formed in 1987, and afterwards Vladimir Fridkes joined in 1995. How did you find each other?

A and E are married, but have worked as separate artists and began working together only when S joined in 1987. F participated in our works as a photographer in 1995, which is when we decided to become AES+F.

How did you decide to form an art collective? What drove you towards working as a group rather than remaining individual artists?

The situation rapidly changed in the early ‘90s (during the fall of USSR and union of Europe). It became more interesting and productive for us to be together, developing a new strategy for a new situation.

Could you talk us through the way you work as a group? What is your production process?

We come up with ideas for projects together. We make a lot of clarifying drawings and sketches. At the stage of realization the project is curated and produced based on individual talents and skills. In the process of working on a project we can turn to various professionals – from IT to formatters and casters.

You are all educated and based in Moscow. Does this cultural sphere influence your work?

In general we work on the international stage. Yet the cultural sphere of Moscow with its characteristic excesses and grotesque has a particular influence on our work. 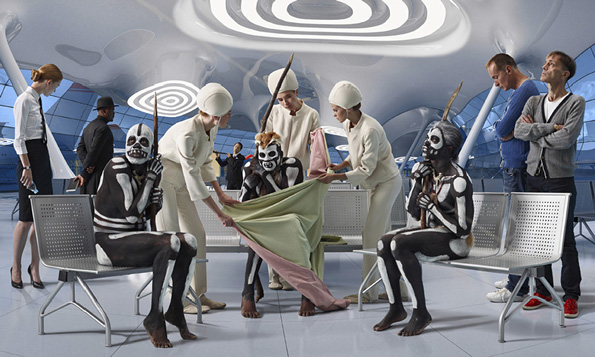 What are the main themes that you usually approach when starting a project?

We like to work with the obvious, the banal. This is men and women, age, savagery and civility, poverty and wealth, servants and masters, etc.

People have coined the term “animated sculptures” in relation to your work. What techniques do you use in order to achieve that effect?

Largely this effect is created using animated photographs, not a video camera.

What would you like to experiment with in the future?

Right now we are thinking about an experiment in traditional technologies – canvas, oil, marble.

Two of you have strong roots in architecture. How did that translate into your group projects?

Besides architecture and animation in AES+F’s background, there is book design, illustration, and photography. All of this influences our projects.

Can you tell us a bit about your group exhibition at Heist? What can we expect to see?

At the show there will be a big work called Jungle Elegy and a one-channel video from the project Allegoria Sacra.

The project is based on the painting by Giovanni Bellini with the same name, which depicts Purgatory. In our version, Purgatory is a contemporary international airport where characters from the most diverse cultures, times, and mythologies intermingle. That, and space stewardesses from Kubrik’s film, 2001: A Space Odyssey, together with various passengers like Chinese workers, cannibals with ritualistic body paint, a centaur, and Apostle Paul in the guise of a policeman with a sword in his hands.

What can we expect next from your group?

We are making a new project called Inverso Mundus – Inverted World. This is our version of a medieval etching with various plots: the poor give charity to the rich, a donkey rides on a human, a student punishes a teacher, and a pig slaughters the butcher.

The Road to Elysium will run until the 12th of January.