Zabludowicz Collection Invites presents solo exhibitions by UK based emerging artists who do not currently have commercial gallery representation. It’s a crucial and respected platform for young artists, often acting as a bridge to more main stream art world prominence. Past invitees have included Hannah Perry and Benedict Drew, two great examples of the career spurring possibilities of this platform and the buzz it can create around a young artist.

The current exhibition comes from Glasgow based artist called Rachel Maclean. Gradually building a name for herself since graduating from Drawing and Painting at Edinburgh College of Art in 2009, Maclean was short listed for the Film Jarman Award last year and now kicks of the Invites 2014 series, also marking her first prominent London solo show. 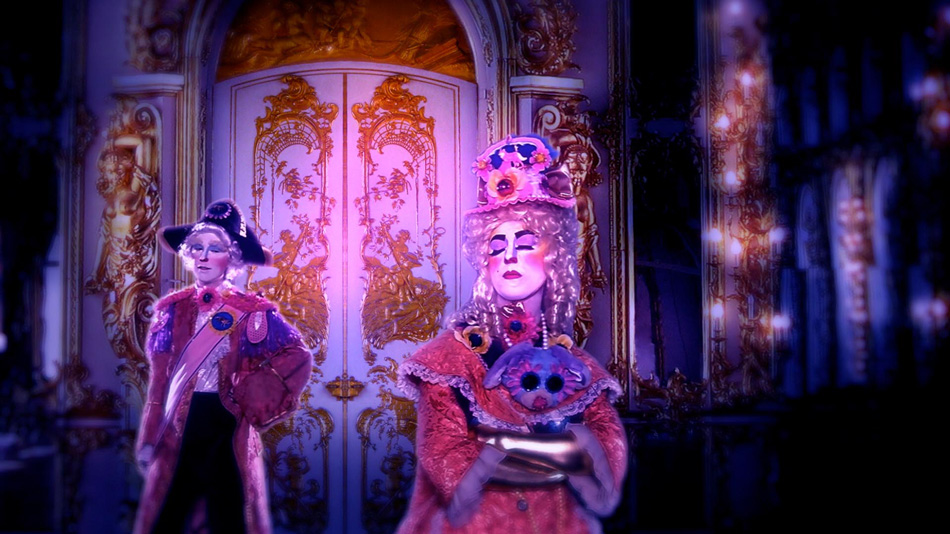 Rachel Maclean, Over The Rainbow, 2013
41.28 min, Digital Video
Commissioned by The Banff Centre, Canada and The Collective Gallery, Edinburgh. Funded by Creative Scotland

Maclean now works with video, yet the fundamentals of painting can still very much be seen in her turn to the medium. Her videos abound with a highly stylised and often brash use of colour, something which seems to fascinate the artist in her unmistakably painterly investigation into its visual possibilities. Because of this Maclean’s films seem to pulse and seethe with explosions of delightful yet also unbearable vividness.

The majority of Maclean’s work is filmed using green screen technology. Characters are superimposed over rudimental digital backdrops, a device that easily constructs Maclean’s garishly hyper aesthetic. In all her films she plays a myriad of characters, dressed one part childhood fantasy to one part surreal nightmare, while expertly lip synching to an array of audio from films and TV, she constructs a suffocating prism of hilarity, wonder, anxiety and even terror.

Maclean presents two videos at the Zabludowicz Collection. The main work, titled ‘Over the Rainbow,’ marks Maclean’s most ambitious project to date. At forty one minutes in length it took two years to complete and is a far more polished offering than past films.

It is the soundtrack that hits you first. It spills out beyond the tiny gallery space and into the grand foyer of this former Methodist chapel, as forceful as the frenzied visuals that will soon set upon you. Once the onslaught of volume has been negotiated and low bench seats have been taken the assault of Maclean’s fantastical imaginings can begin.

Images rush by in a disjointed whirlwind, narrative utterly skewed by the appropriated audio that incorporates snippets of classic horror, Royal photo calls, episodes of Sex and the City and, at one point, a Nicki Manaj style dance routine mimed by the pink haired, ruby shoed protagonist of the piece alongside an enormous menacing bunny.

Hilarious and then suddenly dark and unsettling, it’s the complete suspension of our usual understanding of narrative, the ordered and predictable sequence of events we grow up with in Hollywood Rom Coms and soap operas, that leave you feeling lost, completely unable to predict what will happen next. The film is unequivocally engaging and, it has to be said, very unlike a typical ‘video art’ viewing experience in which tedium and disengagement all too often come into play. Conversely, this feels like discovery, like something refreshingly different.

The second film ‘The Lion and The Unicorn,’ is a relatively more measured affair, the emphasis here being on the word relatively. It’s immediately apparent the work is a departure for Maclean who has abandoned green screen in favour of a real location, a house in the borders of Scotland. The Scottish theme persists as nostalgic emblems of Scotland and the union, in the form of outlandish characters, act out an ambiguous commentary on the independence debate, pointedly mocking the myth and idealism bound up in the position of both sides.

Maclean in this exhibition deals with familiar themes in strikingly fresh ways. The absolute triumph of her work is its outrageous visual allure paired with its appropriated soundtrack. Both serve to construct this freshness, this ability to engage immediately with the viewer just like main stream entertainment, a language we all know so well, while at the same time critiquing and sending up that culture it so effectively mimics.

Rachel Maclean’s presentation for the Invites series is then undoubtedly a fantastic show from a young artist who deserves the success a platform like this series can create. Let’s hope this opportunity presents this remarkable artist with the audience she so deserves.