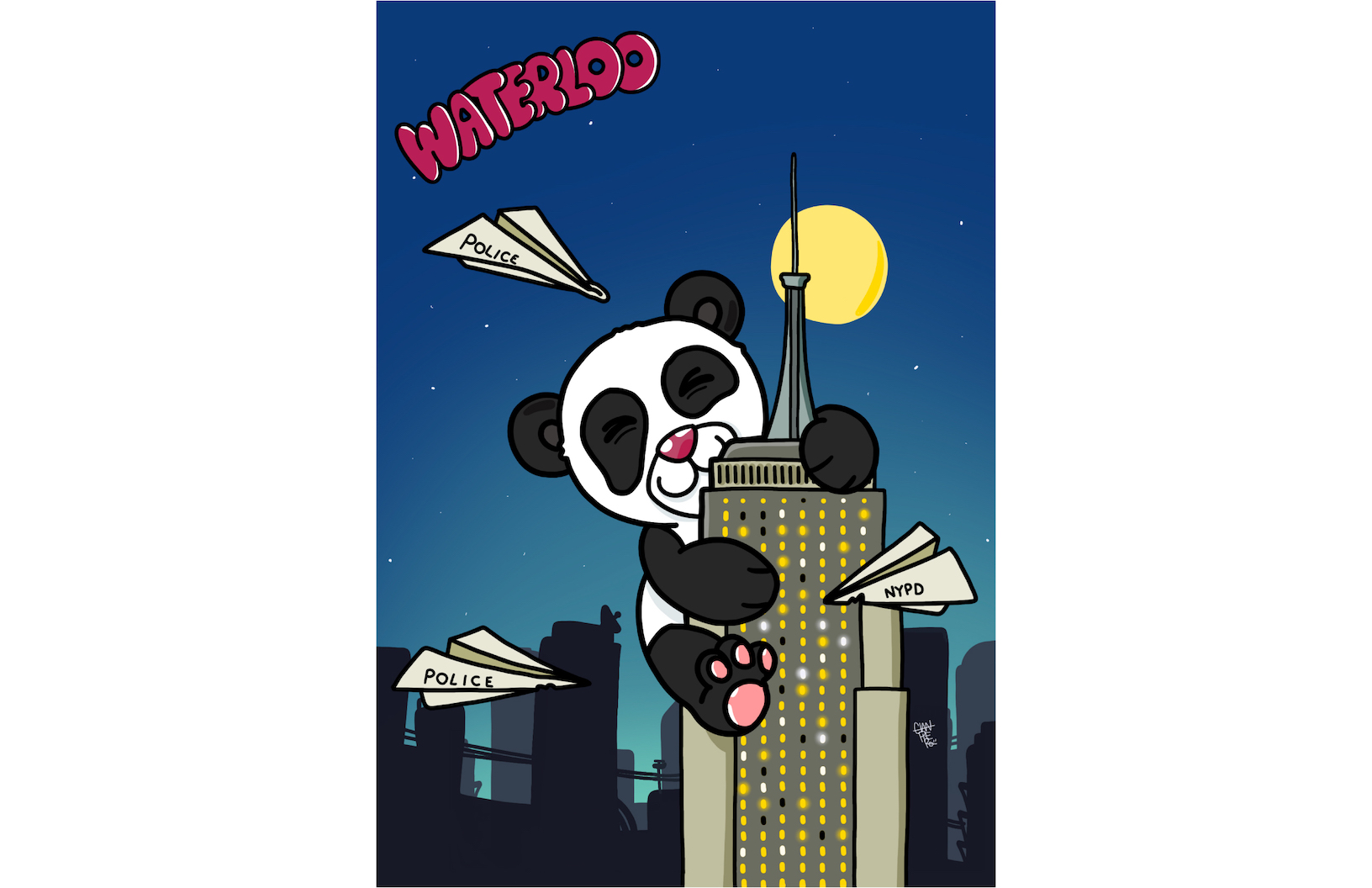 ADV Creative Director Niccolo Lapo Latini lands in Schön! Magazine for the third time after the success of BUIO II in collaboration with Emanuele Ferrari. Waterloo, directed by Niccolo Lapo Latini, gives life to a new character created by the pen of Gianpiero D’Alessandro — Justin Bieber’s Drew House’s cartoon designer. It is a picture symbolic of a dramatic tale — a representation of the current conditions of the creative sector of the fashion system.

A warm welcome back to Niccolo here in Schön! Magazine. This is our third talk, now following the success of BUIO II. How are you doing, and how did your 2021 begin?

Under pressure [smiles]. Seriously, I’m very happy to be back on Schön! and thank you for having me here. The success of BUIO II has certainly brought much appreciated satisfaction and recognition, but at the same time, many more responsibilities and expectations, especially on my part — I am always the most severe judge of my work. My 2021 started with a completely counter-current choice: postponing all live productions until April and thus concentrating on remote virtual productions. Immediately after Christmas, I had a meeting with my team, and we assessed that a variation of this kind to my calendar for the first part of the season could be anticipated, and we could prevent new difficulties of displacement and coordination given by a third wave of COVID-19 in europe. Our plan has worked, and luckily, we predicted well. So, I started January with virtual productions and the respective releases of the projects for the British publications Wonderland and MUDISCH; now, I am ready to face the most demanding part of the season — starting right here on Schön!.

The initial motivation for me is always to get out of my comfort zone and to have fun experimenting and discovering new solutions for representation. After all, creativity is the power of association. I’ve always been intrigued by the simplicity of the world of Justin Bieber’s Drew House. It is a perfect example of how sometimes the aggressive and provocative attitude of a public, on-stage figure — in this case, a singer — does not always identify with his true way of dressing in private life. It is almost a home-grown brand, where comfort is the basis and the beauty or the presence/scenic value of it — and this fact should not be underestimated — is not a priority. What gives the extra spirit to the base of comfort created by Bieber are the fantasy characters of Gianpiero D’Alessandro — real cartoons with a proper name that give uniqueness and personality to the garments and the cozy soul of Drew House. I was asked to represent the current condition of the creative sector of our fashion system, and I didn’t want a model to do it. I needed something ironic and sweet, but at the same time, something that could hold a deeper meaning. Fashion doesn’t have to be represented by a general condition or by a person — I wanted my own cartoon. No one better than Gianpiero could do it. Once I chose the protagonist I wanted for my painting, I contacted him through a photographer friend we have in common. We met, and we developed the idea together. That guy is talented, and it was fascinating to combine our visions. 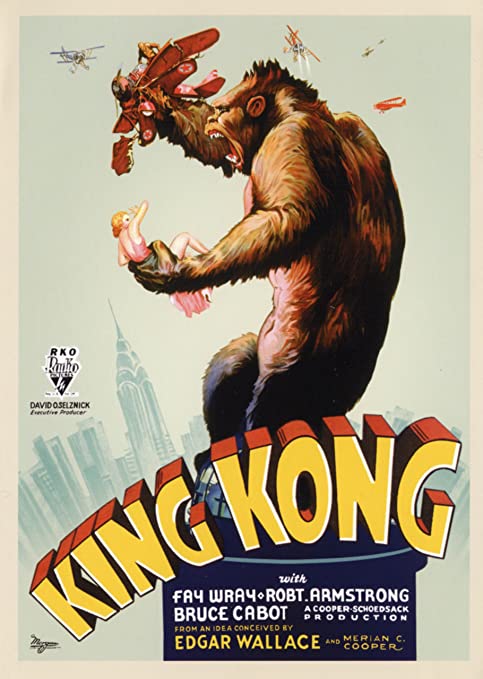 Waterloo is a deceptive project — simple, but full of connections. Starting with the title itself, which is also the name of the panda cub, the protagonist of the picture. What are the main references?

It is true, the levels of reading are varied. Our intent was to achieve a Rubik’s cube effect: many readings and possible paths that all lead to a single final solution. The little panda, Waterloo, is at the same time an alter ego and a reference to the famous scene and manifesto of the 1993 film King Kong by Merian C. Cooper and Ernest B. Schoedsack, showing the attack of the Empire State Building in New York. At the same time, the name itself is an explicit reference to the battle and defeat of Napoleon Bonaparte in 1815 at Waterloo. The panda thus embodies two great myths and legends of the past. Despite their great value at a certain point in their life, these myths and legends, motivated by false choices dictated by lightness, pride and too much confidence, fell into the most famous and mocking trap of life: it’s not over until it’s over.

In less than two years, COVID has not only broken the lives of small and medium sized enterprises but has taken away the security and tranquility of all the historic and powerful companies of the fashion system in an instant. This moment of difficulty has meant many internal creatives are removed instead of being able to do well. Their resource failures and strategic actions have strung together a series of missteps that can sometimes be fatal — they’ve moved from overly-expensive productions and showcases, which have not brought about their desired results, to almost zero productions, all without soul or concentration, thus devaluing their image. They’ve been kidnapped by the fear of taking some risks. Taking courageous choices does not mean pushing on the accelerator when we cannot afford to, nor locking ourselves up in our doubts, losing precious ground hardly won. Unfortunately, the lack of clarity makes you lose the vision of a third option guided by optimisation and foresight.

Does the particular symbolism of the painting forecast a precise, desired future? Why a panda cub?

Actually the panda cub itself is the answer — an animal species to be safeguarded, at risk of extinction. Waterloo acts just like a weak child who plays the adult, trying to imitate his idols, in this case, Napoleon and King Kong, but obviously fails and suddenly finds himself at a point of no return. The internal creative department of many brands today does not work, and COVID-19 has only highlighted a difficulty that has already existed for some time but was well masked (inaccurate management of annual budgets, choice of the wrong representative works, lack of civic commitment, lack of valorisation of the territory, design plans with short-term results without foresight which lead to repetitiveness and self-referentiality). A change is needed; there isn’t much time left. The helicopters are firing, and the panda cub won’t hold its grip for long. 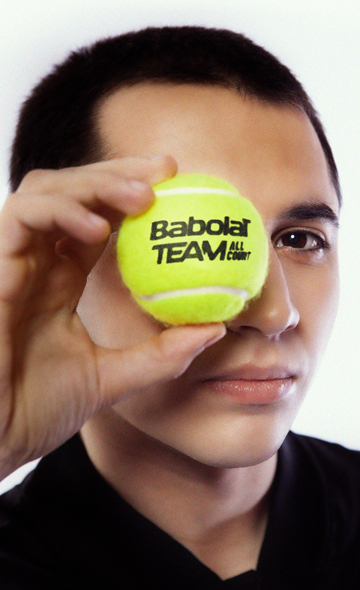 A fundamental episode to highlight in your career to date is your new partnership with the French brand Babolat. They’re betting on your experience in the industry and creativity, and you’re the first and only talented they’ve selected from the fashion world. Your adventure with them begins this month. How was this collaboration born?

Well, it’s definitely a great thing. At the end of the 2020 season, I received different partnership proposals from various brands for the 2021 season to follow my activity as creative director on the set, business trips and daily life, but I had not yet made a decision. In February, I had the first contact with the Babolat team, and I immediately perceived a particular feeling.

Babolat is one of the biggest brands in the international world of tennis. They’ve sponsored figures like Rafael Nadal, who is ranked number 3 in the world with 20 Grand Slam titles. Why choose a sports brand as a sponsor?

This was actually the detail that made the difference. Tennis for me has always been like a best friend, a travelling companion since I was 11. Being able to collaborate with the same sponsor of my tennis idols and have a partner that follows me both in my profession around the world and in my daily sports life is really fantastic.