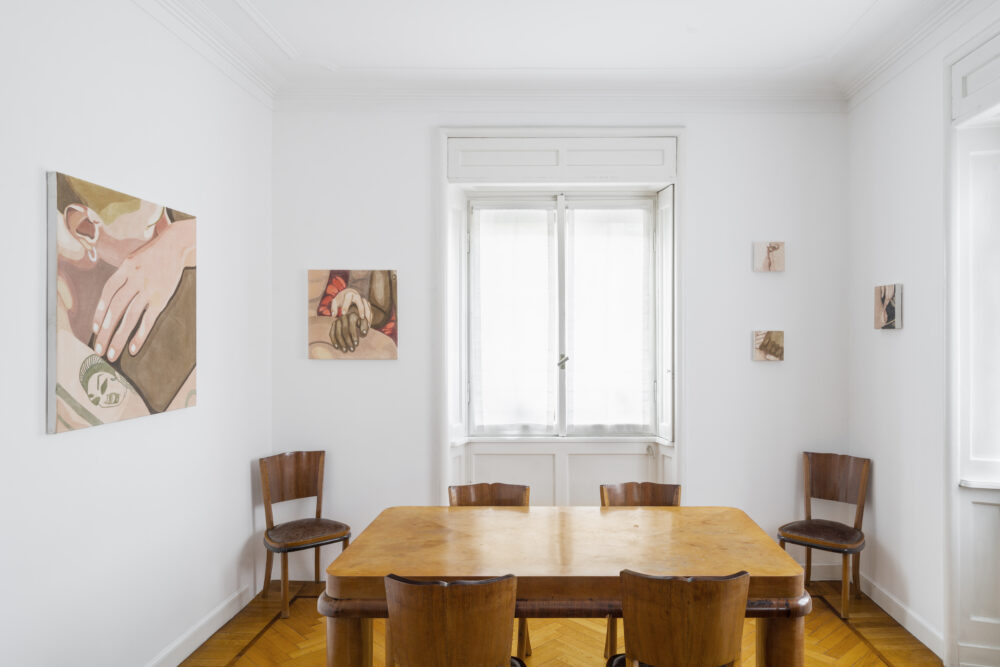 With her unique treatment of oil colours, artist Verde Edrev is re-interpreting both the model and the purpose of portraiture for a generation where proximity and intimacy are closely bound to the digital world. Born in Florence, Italy, Edrev then graduated from City and Guilds of London Art School, where she began honing her practice on questions of representation in affinity with her subjects, reflecting on the social reality of contemporary bodies. Showing for the first time with Salotto Studio, a Milan-based creative studio that hosted the works in a salon-like setting where viewers are invited as if to someone’s home (with paintings beautifully displayed in the kitchen and bedroom), Edrev brought viewers face to face with bodies in embrace and in presence. Curious to understand and explore the fascination of Edrev’s painting, Schön! sat down with Verde to talk about her show, Ricordami Che Ti Devo Dire Una Cosa.

After months of lockdown and distancing, how was the experience of a show?

My concern was that people really felt the paintings, because I really wanted my work to function on an emotional level. Before even being able to understand the concept behind the paintings, I wanted people to feel them.

I think people got them in a very natural way. And, and that makes me want to do more, and explore this intimacy theme more deeply.

Do you think something about the context of Salotto Studio, practically like a home opening up to viewers, helped in that?

When we planned the exhibition, we didn’t think about it in those terms that much. But the fact of presenting it in a private space definitely had an impact. When we first started talking about it, I had another series that I wanted to show, and then obviously the second lockdown happened and during that time, I made a whole new series.

The second series, I made during the second lockdown when I was in Tuscany. When we actually finished putting the pieces on the wall, this intense feeling emerged. The bodies really occupy a space, inside and outside the painting: they absolutely inhabit this space. And I can easily imagine them being present even when I’m not there, when there is no one there at all 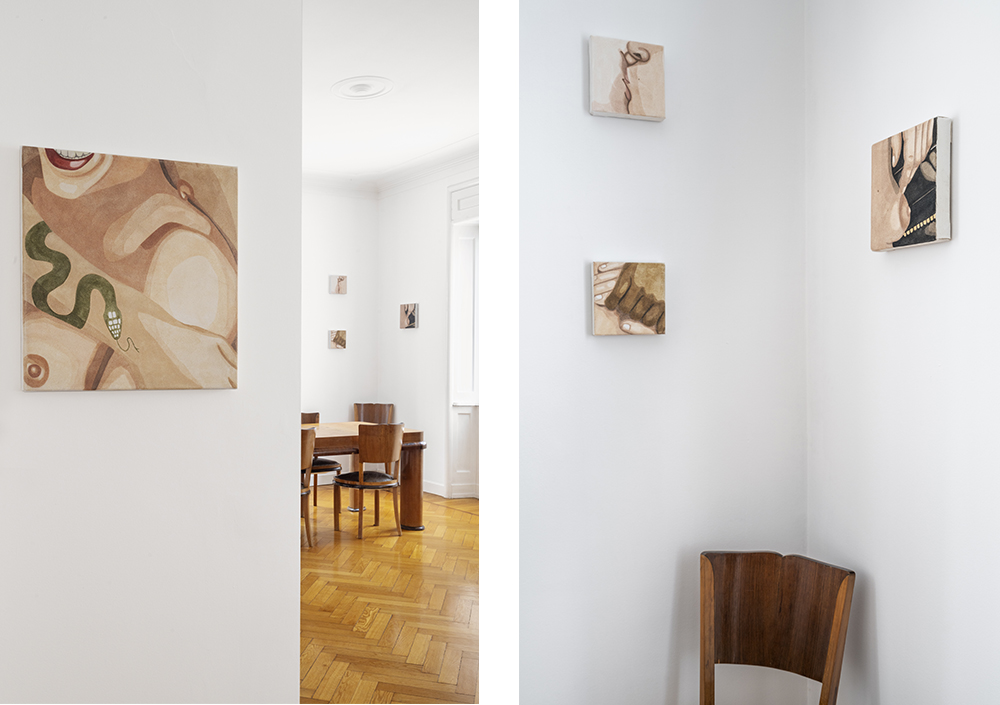 There’s a certain physicality to their presence…

Yeah, exactly. And they’re here naked. And so that’s a lot of fun for me to imagine them here naked.

Do you think that after months of social distancing, the fact of showing works here in this intimate space, with your work on physicality, was particularly moving and touching to viewers?

Definitely, I think that’s another thing that people have felt. I was working with nudes even before lockdown. And now it’s much more present in my work. And after what we have been through, there is an openness to talking about it, which I really, really appreciate. Being without that experience of physicality for a long time, I think now, the conversation about it is more welcome. I think we need it more, because sometimes the idea of intimacy is only in a home, in your private place.

Now we are much more open to admitting that we need intimacy and are maybe more willing to actually look for it.

This idea of intimacy as a way to heal, to overcome this trauma – collectively, through art – is perhaps the best way forwards to elaborate this physically, as if there is a hunger to elaborate things physically that we perhaps haven’t realised intellectually. Would you agree?

I think this is actually an aspect of my work that is timely: it’s easier to relate to people. In both my series, one with bodies, and the other one with the skies, I want to look for those elements that we all share, despite any differences. It’s kind of magical to see how people can relate to them even more now.

So it’s not something that was before and after? It’s been a continuum, where social distancing somehow spotlighted the importance of contact? You said you’ve been doing nudes for a while?

I’ve always been interested in what’s important to us as human beings. The body, sexuality, feeling. Art, for me, has always been my way of understanding. I was trying to understand the world around me. The body was basically an essential part of this understanding.

My current practice of taking pictures of people and then using the pictures to do the paintings, is something I started two years and a half ago. I asked people to pose. And at the beginning it was in my studio, and then they started doing it at their home. That experience became almost as important as the paintings themselves. 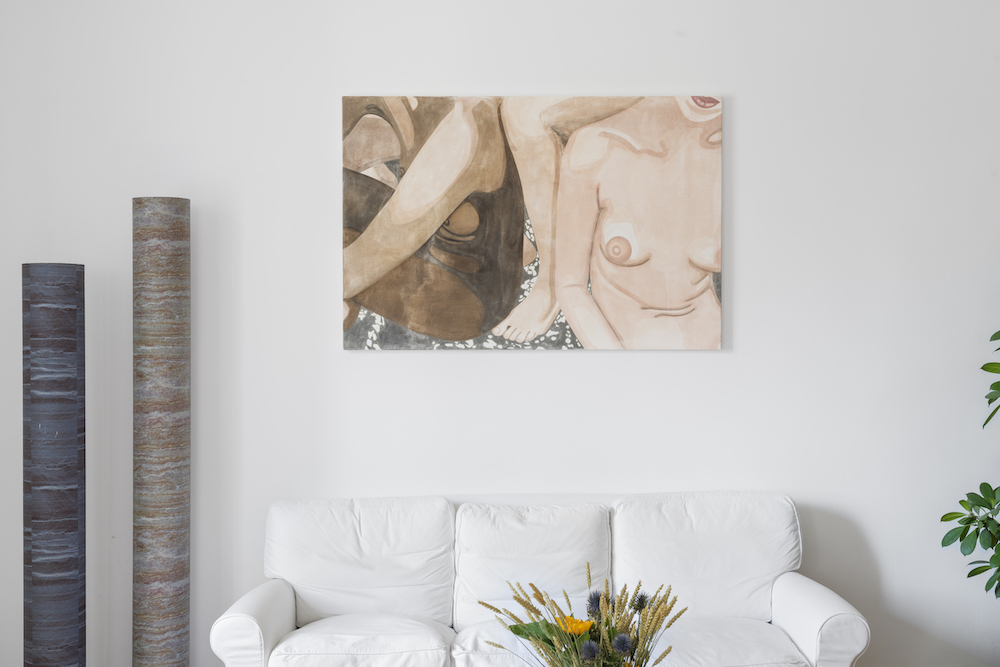 You said actually used the perfect word: “the instant”. I exclude the face most of the time; I use that instant for the singular to become universal.

I look at the history of art, as both an example and a challenge for me to actually re-establish a conversation about canons, and how nudity has always been an important theme in the history of art. I want to redeem that quiet, poetic language, but I want to make it contemporary, without dividing people, categorising people. And I want to talk about reality and intimacy, about societies now.

Your subjects are also young people, queer people, people of colour, which cuts with classic portraiture.

How did you develop your process with oil paints?

There again, there’s similarity with classical painting and a difference. I use completely eco-friendly and organic paints. This is a water mixable oil paint, which makes it super, super thin. I paint adding layers, one on top of the other to create transparency: you can actually still see the primer. I want to make a reference to the historical art of fresco.

With the skies, I use water-based ink, applied with an airbrush. They look like prints, but they’re not, they’re completely handmade and every piece is unique.

I suppose there is a contrast with traditional oils, because it is a medium usually applied in heavy layers.

Exactly. I think that the lightness is a very important part of the work; I don’t want too much of control.

There’s also a feeling of seeing sexuality in your work as a fun, light subject.

Definitely, there’s a personal aspect to the narrative, so, but I want to show how nudity and sexuality and intimacy are actually light, at least most of the time! Sometimes in the arts there is this way of using the body to just make a statement and to use it in a very aggressive way, which was very much the case during the ‘60s and ‘70s. I think now we need to re-establish a canon of corporeality. 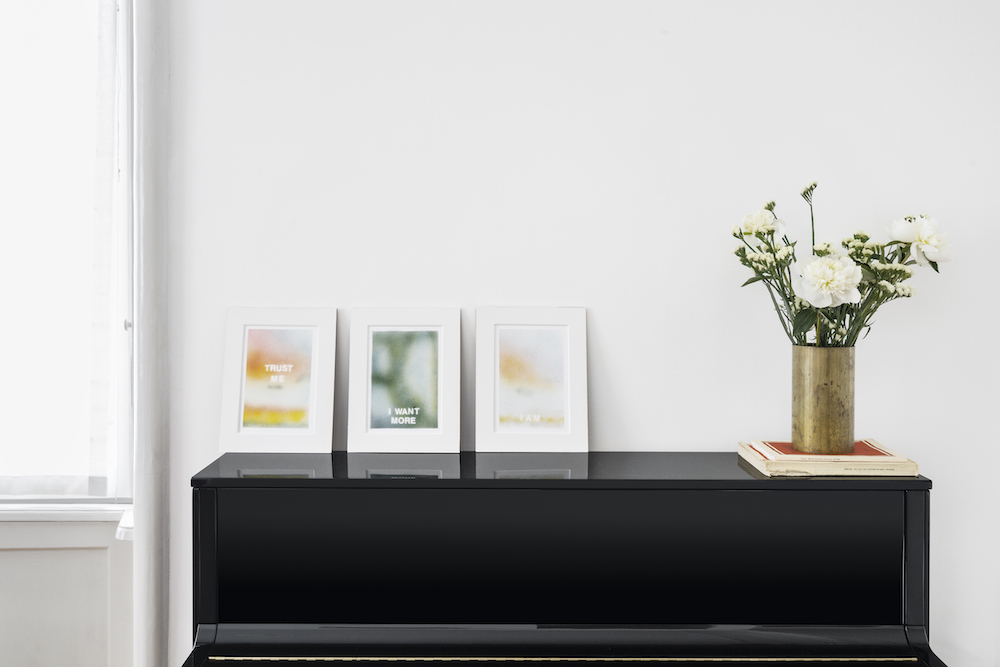 There is definitely an irony and a sense of humour to the way you use language, almost like a contemporary poet.

That’s very true. I write a lot about and around my work, it really helps me understand. Writing functions as a mirror.

You’ve spoken also about acceptance in relation to bodies. Do you think it’s important that art is inclusive about types of bodies?

Yes, absolutely. That’s super important. Acceptance is obviously one of the most important things that I want to express: because, again, we are the body. We need to talk more about it, look at it; we have to love it and to investigate the different areas of the body. It is the irregularities that make the body different and unique.

What are the next steps for you?

I’m working on interesting project at the moment, basically integrating the concepts of the sky series and the body series. I’m making an installation that blends the poetry of portraiture and landscape. I’ll be going to Lisbon for a month’s residency in September, before going back to London in autumn.

Verde Edrev is in residency at Via Farini in Milan until the end of July.