Saul and Josh are a directing duo from London who together, have created an array of thought-provoking original films. Schön! spoke with the talented pair about their beginnings, paying rent and what’s next on their agenda. 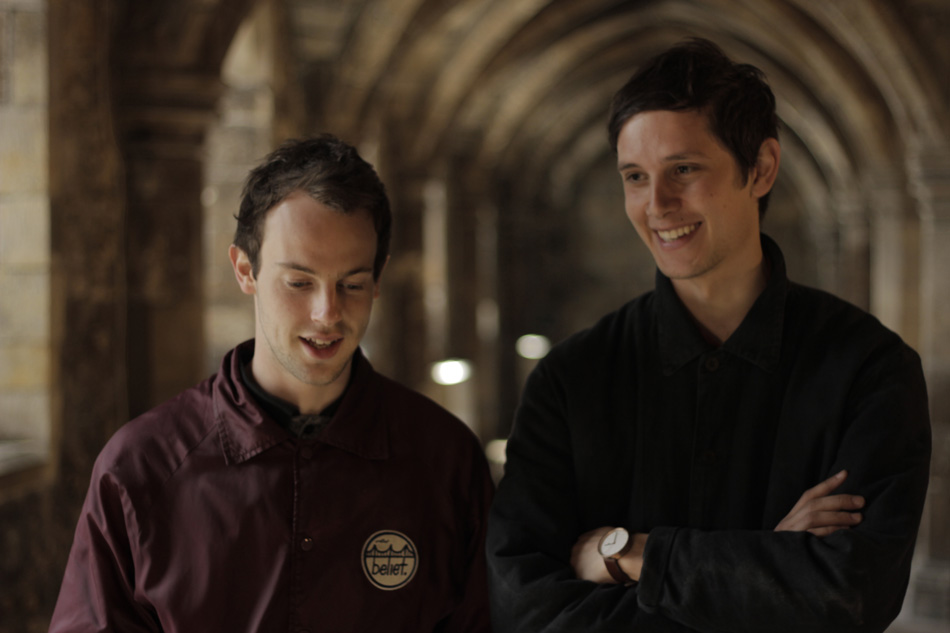 Image courtesy of Saul and Josh

You call yourselves a directing duo. How did you meet?

Saul: We met at university down in Brighton. Although we never worked together whilst we were there, that came at the end of our last year when we made a short together.

Josh: Yeah we knew each other a bit before we started collaborating. When we first met, Saul cast me in a short he was making as an excruciating drug dealer. He asked me to wear all my normal clothes and act naturally which offended me.

Saul: Yeah, I think we got off on the wrong foot, my bad.

How did both of you get into directing and film?

Saul: I was making a short after graduating in Brighton and Josh came on to it to do the sound, as he was just finishing his degree in sound design. Although whilst we were making it, I suppose we realised how similar our ideas and inspirations were and we ended up directing it together.

Josh: Yeah and then from there we just started making anything that was around. Whether it was short documentaries -that we filmed in a couple of hours- or music videos for friends.

How does working as a duo compare to directing alone?

Josh: Being able to develop our ideas as a pair and use each other as a soundboard is a great tool to have. Way before we start to write or explain our ideas to others, we have gone through every detail together in endless conversations, something which we couldn’t [do] by ourselves.

Saul: It definitely benefits that we are so similar, in the stories we want to tell as well. It’s not like we are saying directing duos are better, they could be limiting. But I know that when I have an idea, I take it to Josh, within one conversation it becomes 10 times stronger. I know he gets it and will head in the same direction.

What inspires you to film something?

Saul: You have to have some sort of connection to the material. You have to be able to find something in a story that you care about and characters that you believe in. If you don’t, you will probably mess it up. Well we have, when we’ve tried in the past.

What is your most favourite film that you’ve shot so far?

Saul: Our short film ‘Love Story’, because it was completely us, telling a story we wanted to tell. Although our commercial for Tottenham Hotspur Foundation was pretty fun, I’m a massive Spurs fan.

Josh: I’m an Arsenal fan, so it was a bit painful for me. After ‘Love Story’, I really liked shooting the ‘Factory grooves’ piece we filmed out in Switzerland. We had a lot of fun messing about with the factory workers and always enjoy collaborating with The PSM.

What do you aim for viewers to take away from watching a project of yours?

Josh: In drama, we want to represent reality, if not replicate it. We want the stories we tell to feel real and be filled with complex characters that audiences can understand on a human level, even if they don’t necessarily like them or agree with their actions.

Saul: We always want to challenge the audience. We try to get away from easily digestible plots and characters with simple motives and clichéd personalities. People are not one-dimensional and the lines between good and bad are constantly blurred. Films should be like that too.

What type of challenges do you come across in directing?

You are coming out with a new short film ‘Baby’ soon. Tell us about it.

Saul: Yeah, we’re really excited about it. It tells the story of Anya, a young Welsh farm girl, who is forced to care for somebody that previously tormented her, [who is] now paralysed and helpless.

Josh: It’s based around the dynamics of victim turning to aggressor, and the grey areas that exist between the ideas of good and evil. We have a great production team behind us at Skin Flicks, fresh from their Cannes Gold Lion win, so yeah – can’t wait!

It’s noted that “Baby” will have limited dialogue. Your other films have the same style – is this something of a trademark for you both?

Josh: It is not actually something we go out of our way to do in our work, we just believe in telling stories simply. If there’s unnecessary dialogue, that doesn’t seem natural and key to the story, we cut it out – I think this is especially important in a short film, where there’s so little time.

Saul: Baby is set in rural Wales and most scenes are between a young teenage girl and her paralysed brother – there’s a reason why there’s limited dialogue. Other elements like sound will play a huge role in telling this story, in a way we felt words might not.

What else will we be seeing in the future from S&J?

Josh: We’re really enjoying working with Skin Flicks and are working on some other new projects that we hope to share soon. We also have another couple of short films in development and have just started work writing a feature.

Saul: For now though, all our focus is on ‘BABY’ – look out for it on the festival circuit at the end of summer! Oh yeah, and the one where Josh plays a drug dealer should surface at some point.

Find out more about Saul and Josh here: www.saulandjoshfilms.com and here: vimeo.com/saulandjosh