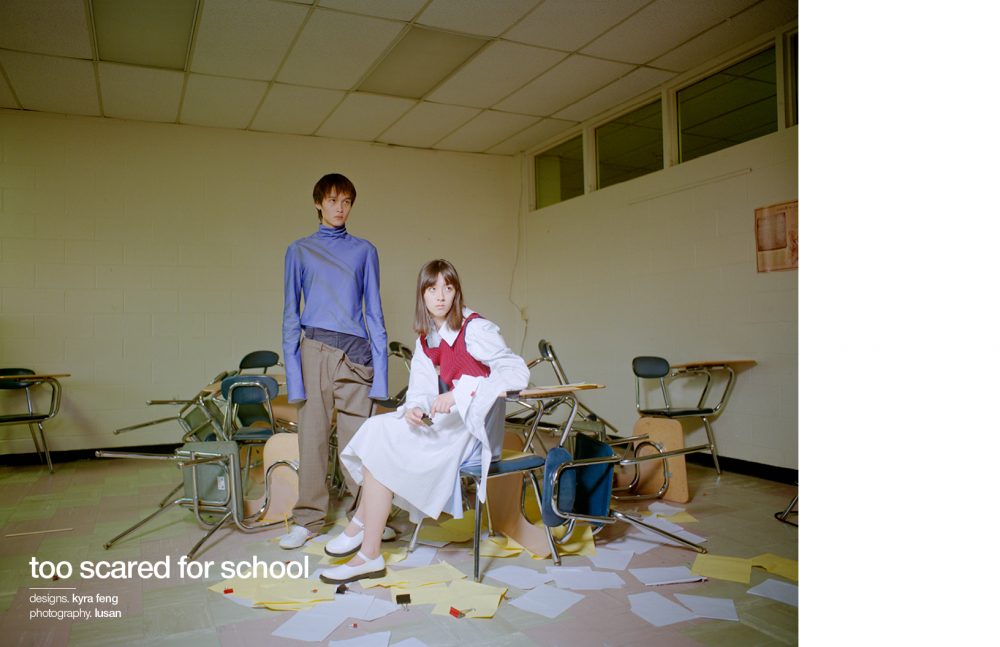 Capturing the loneliness, anger, judgment and envy inherent to bullying, designer Kyra Feng intensely and elegantly explores violence in a school environment with her latest collection and photo series. Working with photographer Lusan, Feng incorporates stories of bullying and social exclusion into her designs, making for an interesting and relatable collection.

Feng is from Beijing, China, later moving to Canada and eventually New York to pursue her education. During this period, she discovered an acute insight into social issues, one that gave her the ability to translate complex cultural problems into prints, patterns and silhouettes. Beginning with last year’s “School Bullying Event,” Feng returns to the topic for this collection, entitled “Too Scared for School.”

The pieces are pushed, pulled, altered – simulating the dishevelment often following a prolonged encounter with a bully. Here, Schön! speaks exclusively to Feng about her collection, inspirations and the accompanying series.

When did your interest in fashion begin?

I guess I’ve always had an interest in fashion, but did not settle on the idea of actually designing garments until high school… Before that, I had always dreamt of becoming an illustrator. Body figures and portraits are my favourite subjects to draw because I like to watch people and translate their figures into drawing. Then I watched footage from Yohji Yamamoto’s late ’90s fashion shows. I realised illustration can only couture a body two-dimensionally… Designing clothes is really about creating a canvas that coutures the body three-dimensionally. That’s when I decided to try. I bought a second-hand dress form, and self-taught myself how to drape through a beginner’s draping book. 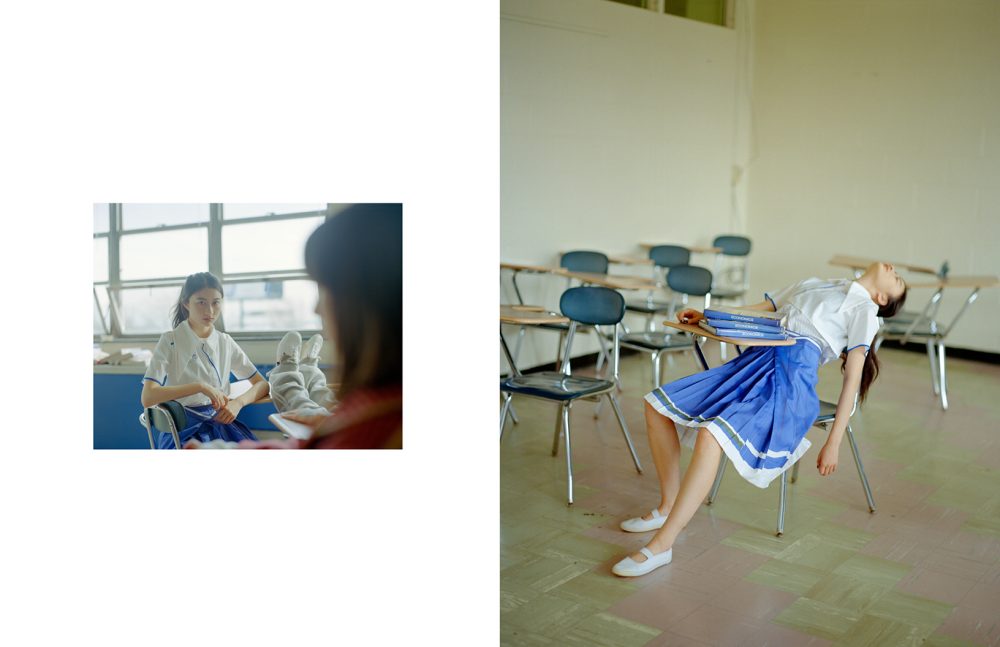 You’ve lived in three different countries. How does this experience contribute to your design today?

All three countries left a mark within me and made me who I am today. By living in both Asian and Western countries, I feel I am more adaptable in taking in new things and viewing things in different perspectives.

My home country, China, contains rich Asian historical elements. It’s the country I was born in and raised in my infanthood. The core of my taste for fashion is strongly influenced by Chinese culture. Canada is more like the land that constructed me. She taught me empathy, which later led me to be inspired by social issues. And last but not least, the U.S. obviously taught me how to make my designs happen. Especially in New York, you are encouraged to be your true self. There’s not much of a hold-back in doing things.

This is your second collection inspired by school bullying. Why did you come to choose this topic as an inspiration for your work?

The first collection inspired by school bullying was done during my junior year of college. At the time I really wanted to dig into the core [of what] really made me who I am today. I was very self-abased in elementary school because I was chubby and very tall for a child of my age. I was bullied in a couple of schools that I enrolled in. The turning point was when the situation levelled up into physical violence – I started to fight back, and wanted to change. I grew up [during] this experience, and I’d like to translate this through clothes and bring courage to people who had the same experience.

For the second collection on this topic, I wanted to focus more on the social issue itself. It’s more like a louder version of the previous one. The reason I redid the same topic again was, last year, a string of shocking school bullying videos were exposed on the internet in China… Chinese netizens called for a stricter punishment to combat school bullying. Though some cities rolled out anti-bullying measures, most institutions still fail to protect kids from being bullied in school due to the current Child Protection Law, in which children under age 16 do not face harsh punishment unless they commit serious crimes. Also, schools and teachers try to dodge responsibilities. School bullying is hardly ever taken seriously. Thus, I chose to redo a collection on this topic in a more “provoking” way. 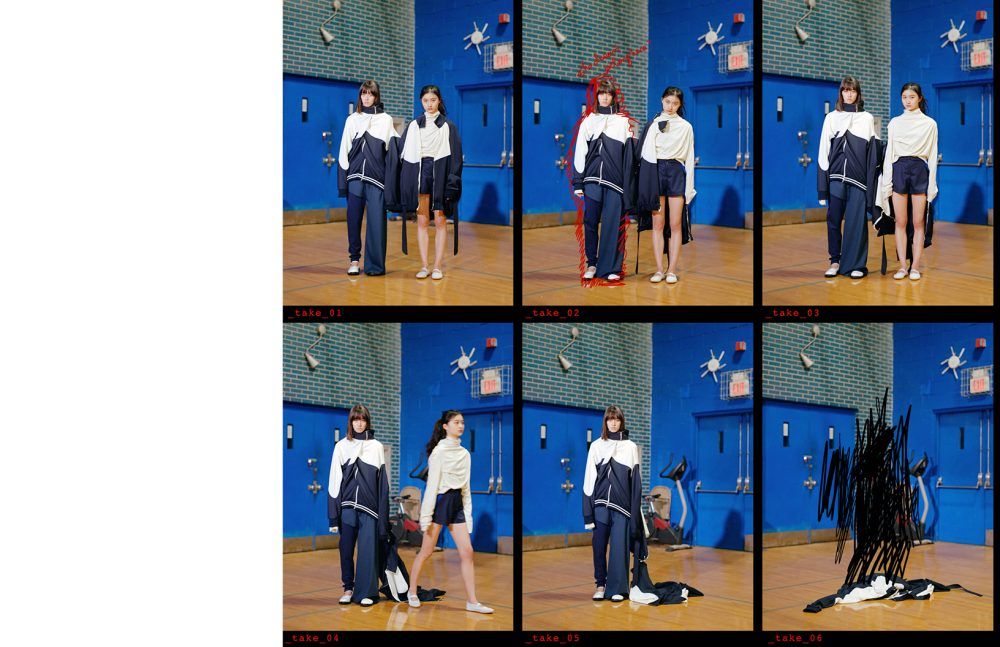 How did you achieve the twisted and pulled look of your designs?

The idea was partially drawn from my own experience of being a victim of school bullying. The bullies would pull on my collar or other parts of my clothes. I also watched a bunch of documentaries about school bullying – I even named this collection after one of them. I paid attention to how children were pushed and shoved around, and how that movement took effect on clothes. Then I had a friend help me make a short film – [they] pretended to play as a bully and pushed me around or pulled my clothes. Later on, I took screenshots and used that as a reference when I draped my designs.

How do you believe design can spark discussions about social issues?

The way I view designers is that we are kind of like “translators”. We translate things we want to express into things we design, and our viewers and customers are the “readers”. They read and interpret the message by obtaining the designs. In fashion’s case, fashion runways are always big events that draw a lot of attention. Every year, there is something to talk about in fashion. Fashion runways do their best on social media. Anything that comes out in a season is spread through the internet, and people comment on it and repost it if they find it interesting. If there are enough people that acknowledge social issues, good discussions about them will be made. Besides, you’d want to wear what you care about and support what you want to support. 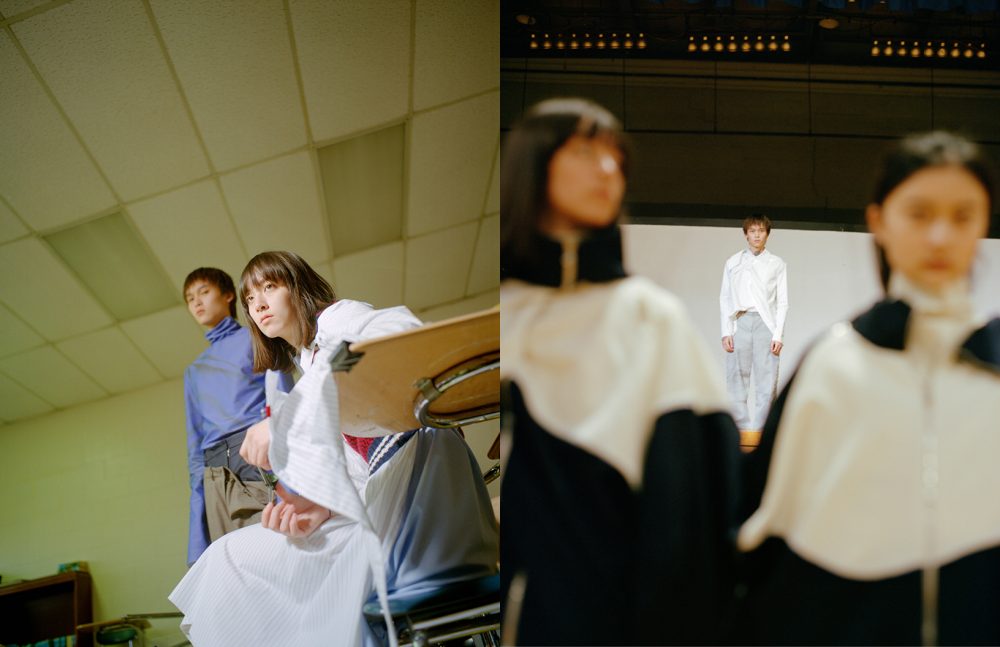 What were some of the visual and aesthetic inspirations for this photo series?

The inspirations for the photo series were basically the same as the collection. The photographer and I both agreed [on] keeping as many school elements as possible would work best for this series. Thus the storyboard we had was mainly pictures of classrooms, class photos, etc.. I didn’t want to have regular photoshoots where models just pose for pictures. I wanted it to be a story. Then we came across films that were about school bullying. We pulled out a lot of ideas from Detachment. We’d like to have the models not as professional models but as students in character, and this way they would fit in the school atmosphere for this series.

Describe the creative process behind this shoot. What direction did you give to your photographer, Lusan?

During the preparation, we both watched movies that involved school bullying a couple of times, such as Confessions [Kokuhaku] (2010), Detachment (2011), etc. Due to the core message of this collection, I really wanted to have the photoshoot tell a story rather than just have models stand and pose for photos. So we wanted to draw some inspiration from films. Lusan and I collaborated for my first school bullying collection, too… For that photo series, it took place in my college. For this one, we felt we really wanted to recreate the high school feeling. Therefore we wanted to photograph in an actual high school location and have the location speak for itself. We rented this high school and borrowed 20 students from the school, and had them participate in the photoshoot to create the school atmosphere of this series. We actually had a set-up in mind where three models would be the three victims that were isolated from the entire class. In the end, I felt the models got really into the student character – it was more like acting for them rather than just modelling. In some backgrounds, we had violently stacked chairs and wildly spread papers on the floor in the classroom to create [a feeling of] chaos. The goal is: not just the clothes express school bullying, but also the surroundings. 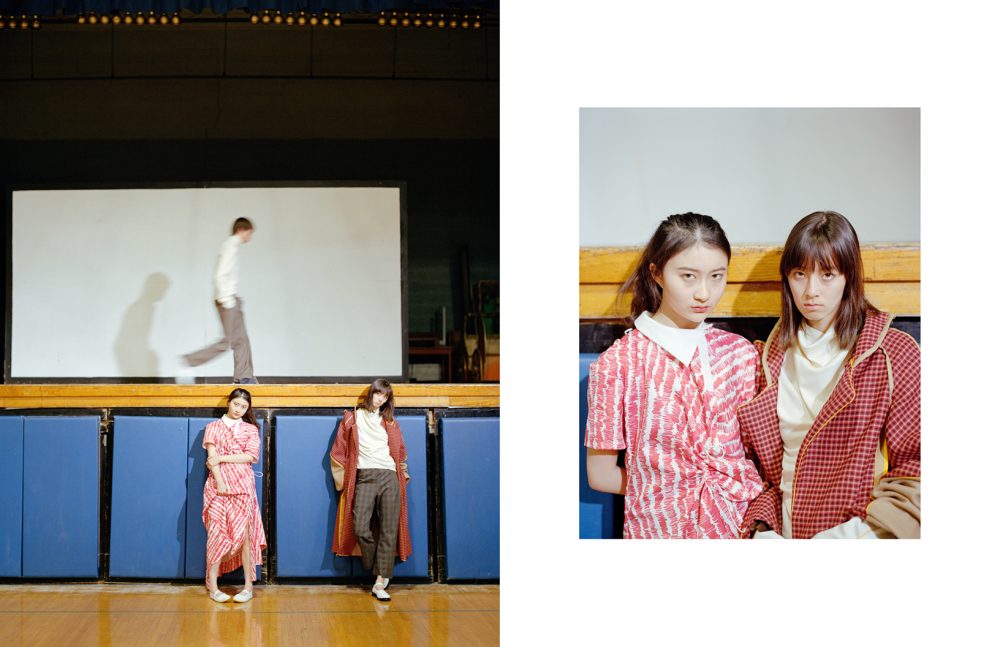 What has been the most informative experience of your design career so far?

I think it would be the experience of going through the entirety of my senior year. It’s a full experience of creating an actual collection – from inspiration board, sketching silhouettes, draping muslins, fitting on models, creating the garments, photographing the collection, to presenting on [the] runway. Each stage involves new things to learn from. And for the first time ever I worked with so many people… which made me really understand that the designer alone cannot make this whole collection happen. 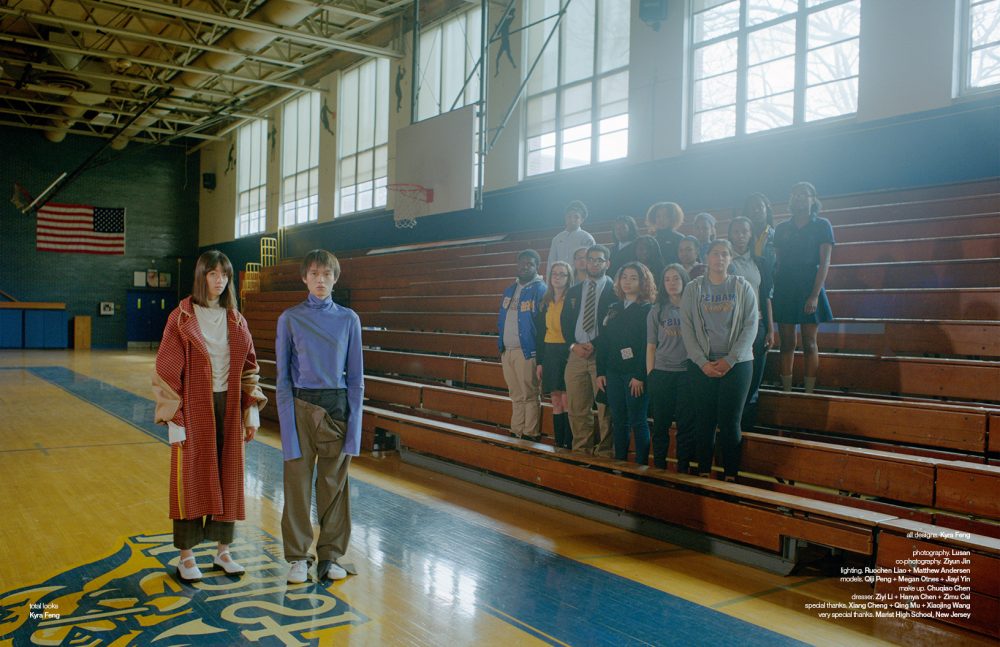