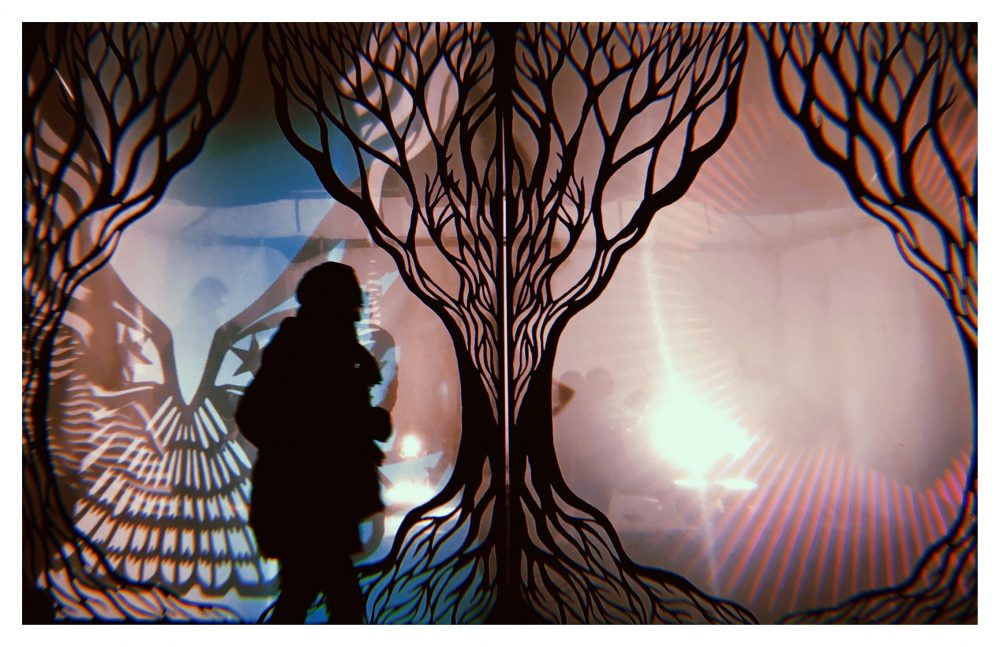 Portland has much to offer in terms of culture, regardless of the time of year you choose to visit. With the moniker of Hipster Capital of the West Coast, there is a great deal of creative buzz around the largest city in Oregon, and it’s no wonder artists and designers have created a great community hub. From musicians and graphic artists to fashion designers and craft beer makers, the city is a melting pot for visionaries — where else could you expect to find a fire breathing dragon?

This February, Portland was home to the fourth annual PDX Winter Lights Festival, and people from all over the state flocked to see the inventive creations. The festival’s footprint is getting bigger every year and 2019 showcased over 100 artists, performers, and installations across the city. With several artists supporting the show for the second time — including Portland-based Jen Fuller, who revealed a formation of luminous paper planes made from glass suspended under the noisy, rusty, Willamette Bridge, choosing to contrast the beauty and delicate sculptures in an industrial surrounding reflects the transparency of the environment and is a comment on how precious things are. While other artists showcased past works from the Burning Man festival, site-specific installations, dynamic live performances, and works from private collectors, with many new artists showcasing ingenious project led designs for the first time. 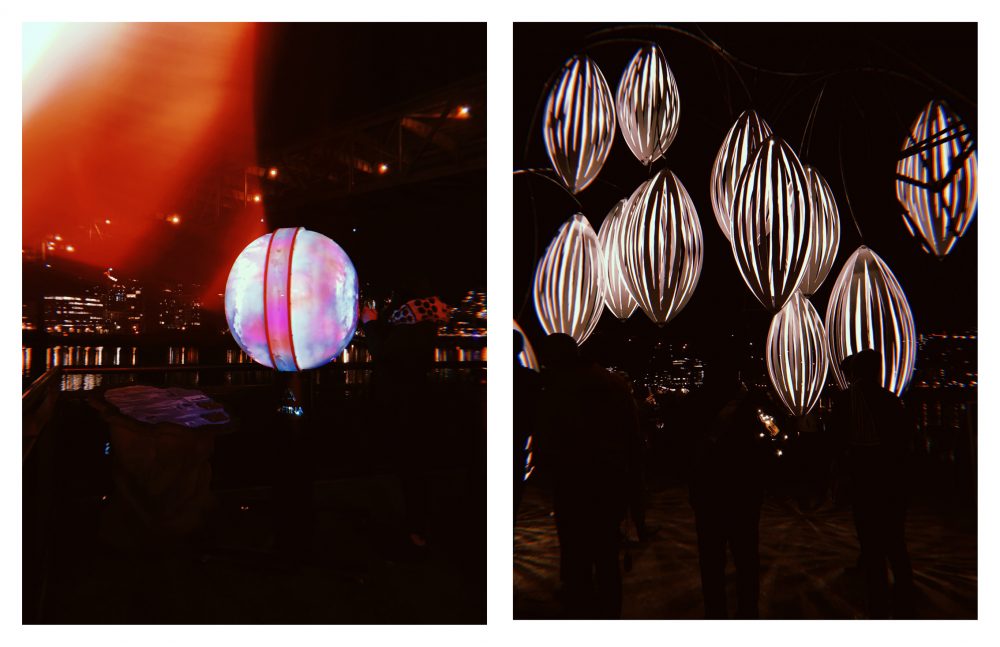 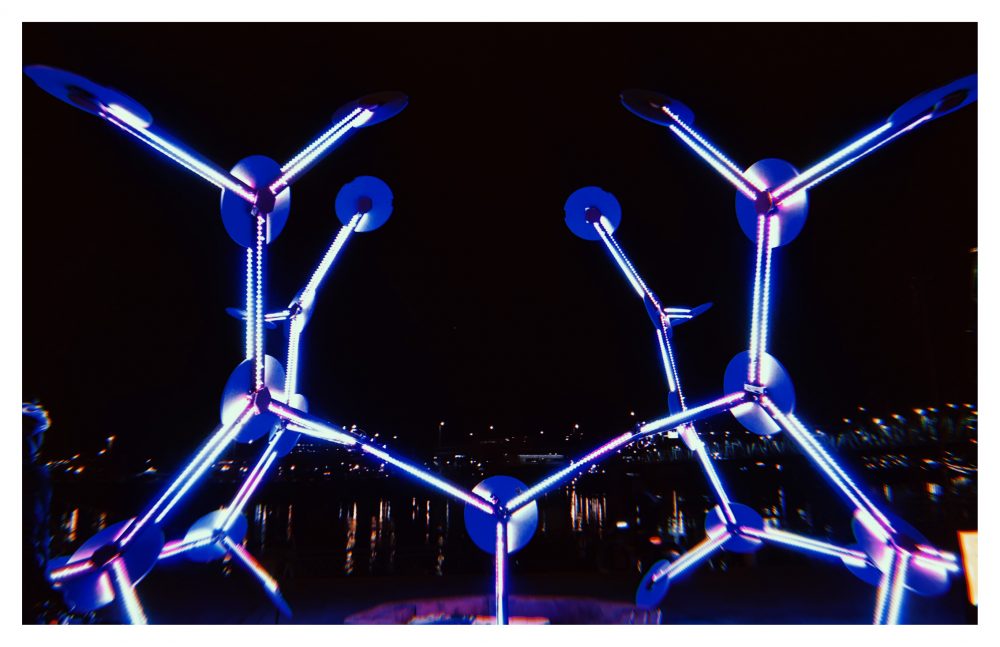 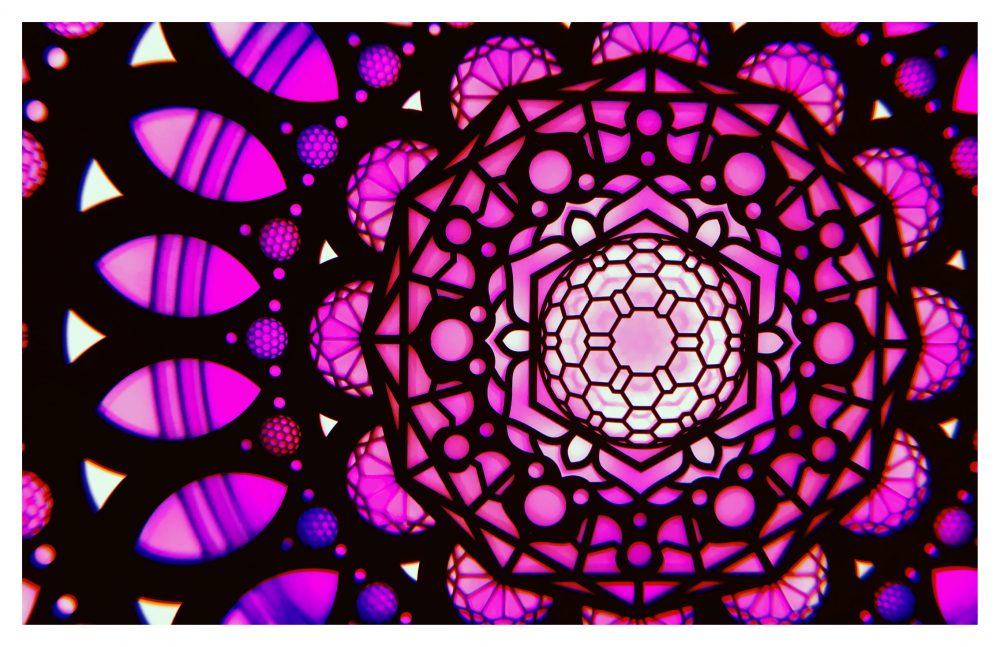 Planning for all weather eventualities, the array of projections on show had to withstand the coldest spell and the freezing temperatures for the four-day, free event. Working with the Willamette Light Brigade, this year’s event was larger than ever, and its footprint spread across the whole city, taking in some of the cool neighbourhoods, which willingly adopted the animated art.

The whole experience was meticulously produced, so as to take visitors on a magical journey through a psychedelic light show. Where, like Alice in Wonderland, they can marvel at the ‘Ice Clock’ where prisms of light dance endlessly — getting mesmerised whilst losing sense of time. Or, get transported to Northern Ireland with the women-only design studio Electric Boogaloo, who created a sculpture which took inspiration from The Giant’s Causeway. Other interpretations were portrayed in the oversized LOVE sign, ’Reflecting on Love’, by Roman Sorensen, which took pride of place on the Green Anchors pier at 23 feet tall and 37 feet wide, which he hoped will “spread a smile amongst spectators.” 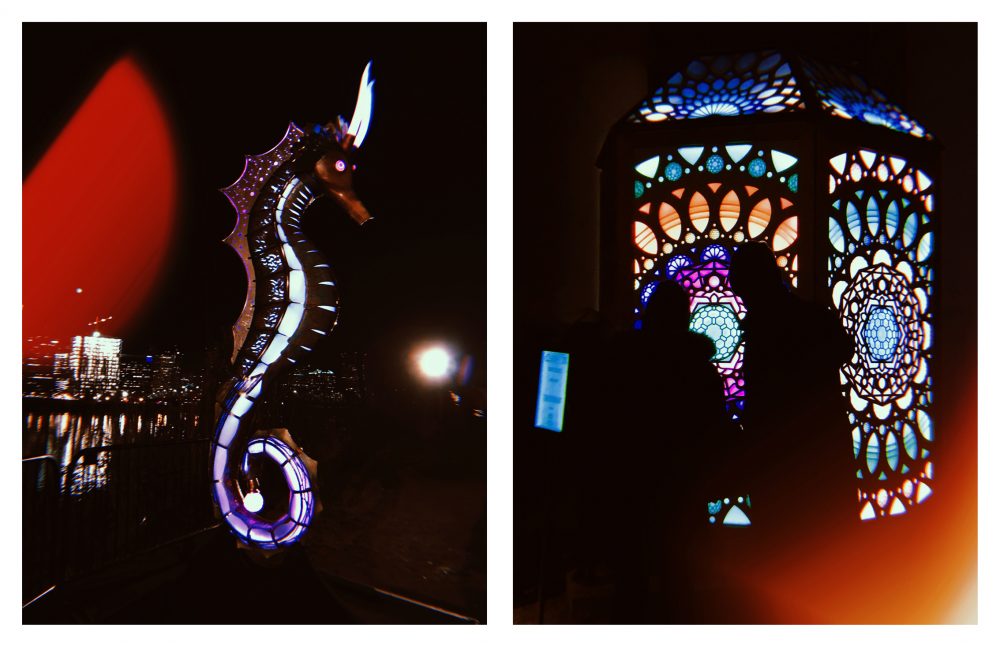 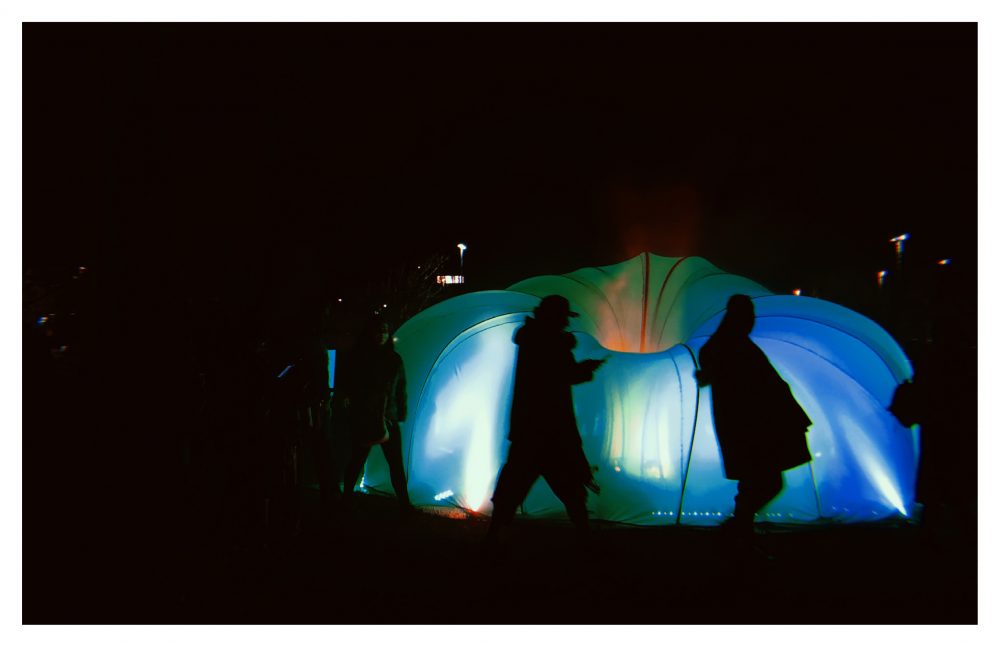 All showing a different perspective on standard light shows, the designs are ingenious and daring visions have come to life to create a collective kaleidoscope of colour across the city skyline. With plenty of activity taking place on the banks of the Willamette River, visitors were able to follow the walkway and soak up fire-breathing dragons, watch emotional film footage and dance underneath the giant, lit up, mirrored disco ball.

Crossing over the Hawthorne Bridge on the Eastbank Esplanade, the crowds could enjoy even more interactive experiments and experiences. And when it got too chilly, you could warm up with indoor experiments at the OMSI (Oregon Museum of Science and Industry), where the bright lights — quite literally — lured you in. Further afield, the Portland State University (PSU) was home to beautiful hanging Japanese inspired inflatable lanterns, by Inflatabill, where the designer used his background in parachuting to make stunning silhouettes in the sky. And ‘Ephemeral Allegory of Structure,’ by Hasmood, took over the Edwardian Simon Benson House, turning it into a magical otherworld with exhilarating and mesmerising projections.

With the theme of this year’s festival, ‘Forward’, each display took a unique and personal approach and every design connected to the issue in a different way — ranging from underwater prisms to voice-activated lights, audiovisual displays. 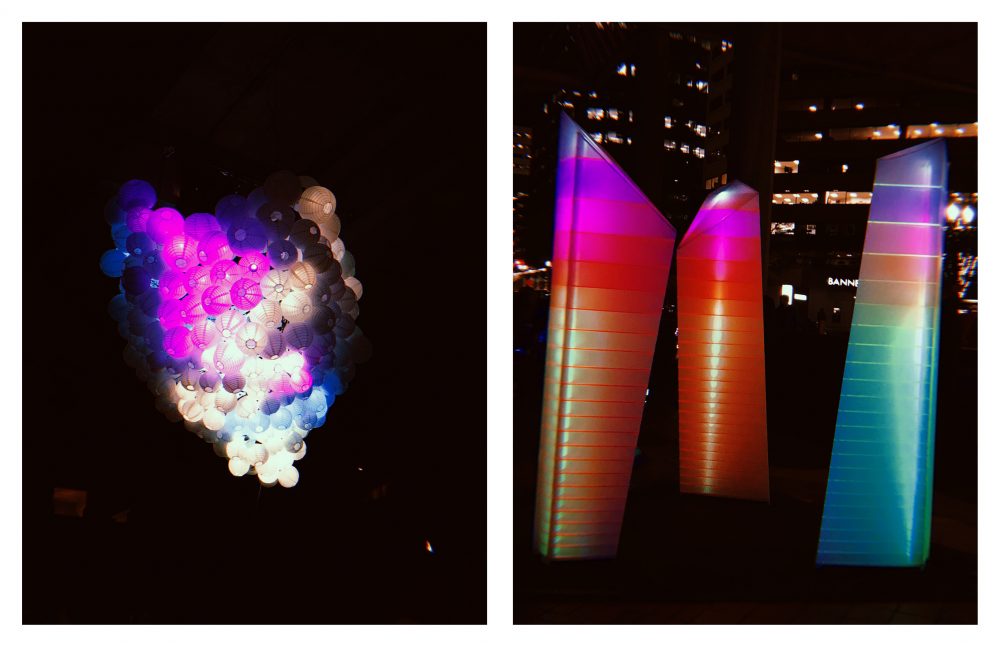 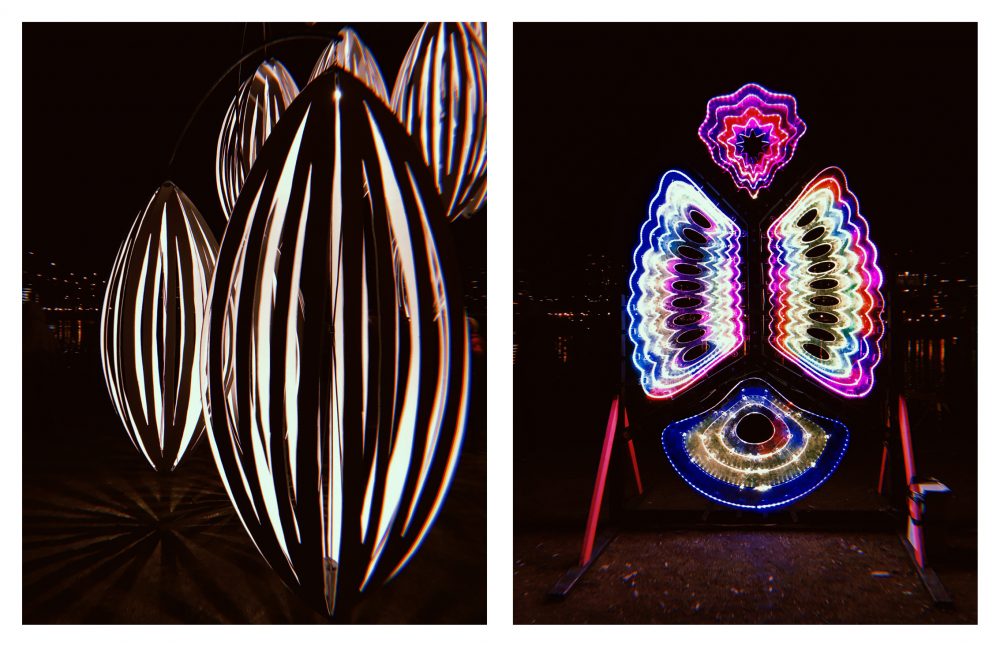 From the larger than life structure, ‘Warm Embrace’, designed by Garth Britzman and Kelsey Loontje — welcoming visitors inside a build based on a traditional American Indian tipi with a futuristic feel and offered respite from the icy wind — to the shadow art at the Shadow Sail Theatre — which used paper lace, costumes, prisms and lenses, so the audience could participate in their own immersive show — and ‘Thirty Circles,’ by Axis Mundi, a kaleidoscope of colours and mirrors which immersed all six senses. Stretching boundaries of visual and mental stability, the result was a seemingly endless combination of colours and patterns, which if you stared at long enough might test your eye coordination! 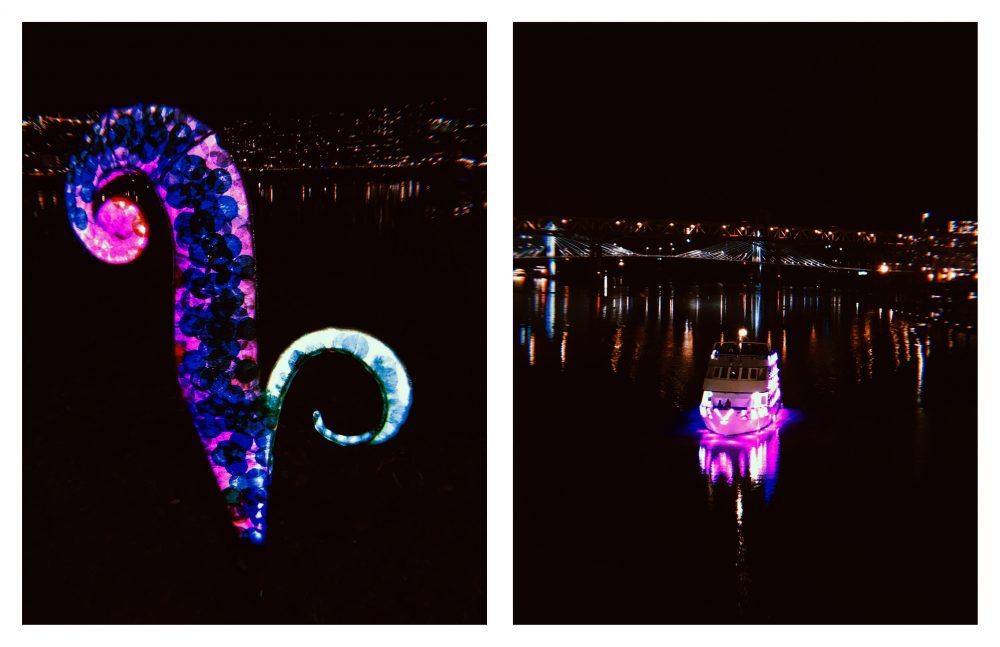 With different free events taking place over the four nights, and the event running completely by volunteers, expect the unexpected and wow at the power of technology. The party vibe went on until late and showcased unexpected visuals, stories around the fire and the hysterical Silent Disco, with glowing headphones and optional fire sticks. Even the children joined in with a children’s lantern parade, which demonstrated this versatile medium in all its forms. 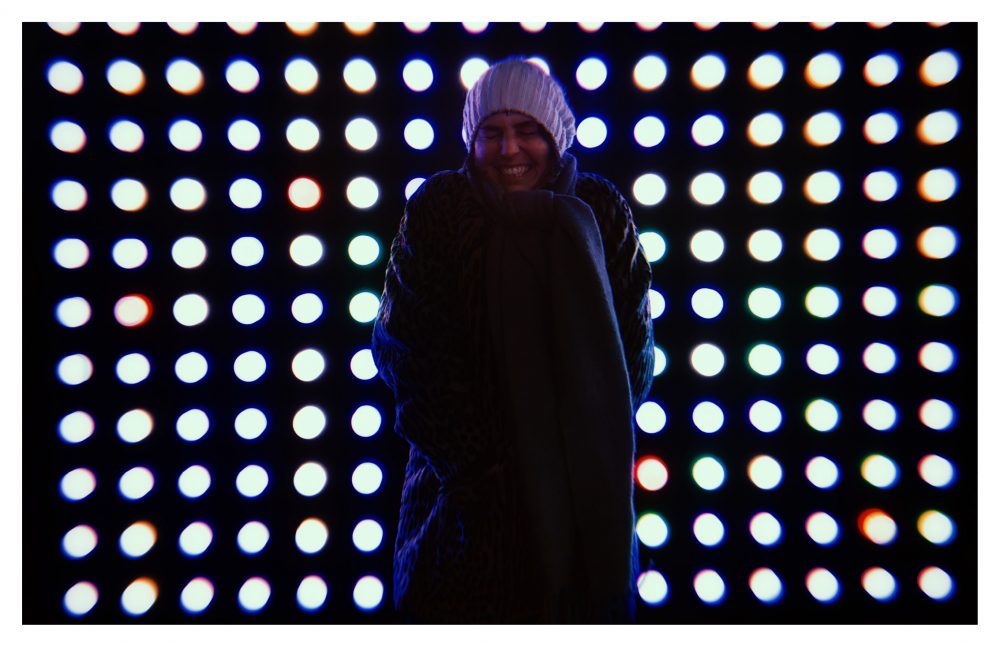 This community event represents Portland and its diverse community.  From the 25’ tall glitter ball covered in mirrors to the free Crystal Dolphin Shuttle ferry between OMSI and back to Salmon Springs, where you could be part of the light art on the boat. Embracing the festival, the ferry had its own spectacular lights on show, so not only were passengers part of the living art on board, they got to see Portland’s impressive skyline from the water, including the lit up Morrison Bridge, the twin glass towers of the Oregon Convention Centre and OSMI.

The Portland Winter Lights Festival transforms any preconceived idea of art and is well worth a visit on the crisp February night to spark your curiosity. I can’t wait for next year.

Check out more on the Portland Winter Light Festival here. For the most up to date information on PDX, check out www.travelportland.com