For those who appreciate the creations of young fashion designers who have graduated from London fashion schools or who show on the runways of the British capital’s fashion weeks, there is little doubt that Matthew Miller is a name that has developed a faithful crowd of followers pleasantly intrigued by his creative development in the sartorial realm. As such, when Miller showed his menswear creations for Spring/Summer 2013 on the runway during London Men’s Fashion Week, it was with great delight for many that his collection was consensually considered to be an absolute triumph and, by far, the most accomplished and professional range of menswear that Miller had ever produced.

A graduate of London’s Royal College of Art and a recipient of the 2010/2011 McArthurGlen Spirit of Fashion Award, Miller was one of the young designers selected by London department store Selfridges for ‘Bright Young Things’ during London Fashion Week Autumn/Winter 2011, one of the store’s initiatives to support young talent by inviting designers to decorate a store window with their collections.

In September 2011, Miller had his runway debut during London Fashion Week as part of the MAN collective show, and the following season he had his first standalone runway presentation on-schedule as part of the official men’s day. Throughout these collections, Miller developed an elegant and unique aesthetic that fused sportswear with traditional tailoring. Deservedly so, his work caught the attention of the international press and featured in magazines such as GQ, Vogue, Wallpaper*, I-D and Attitude. 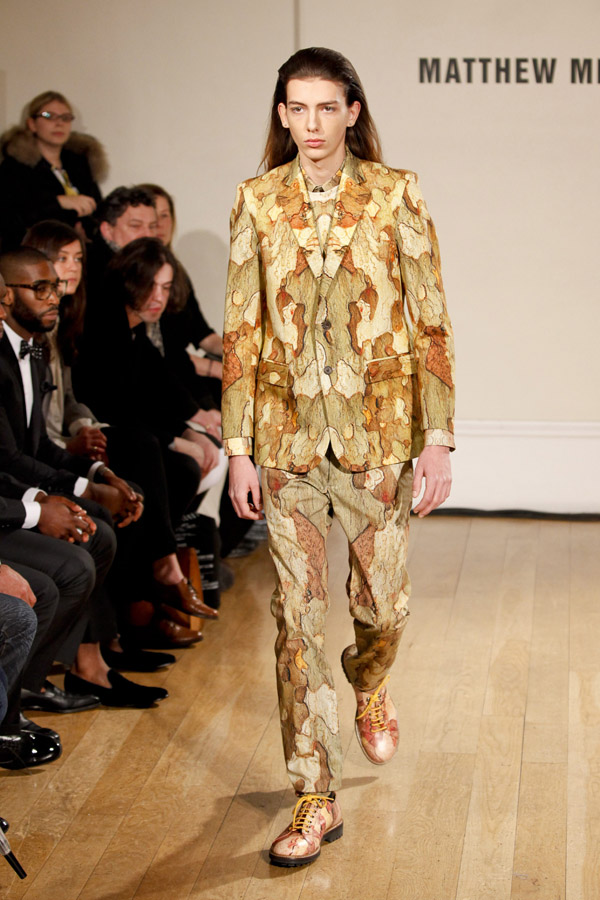 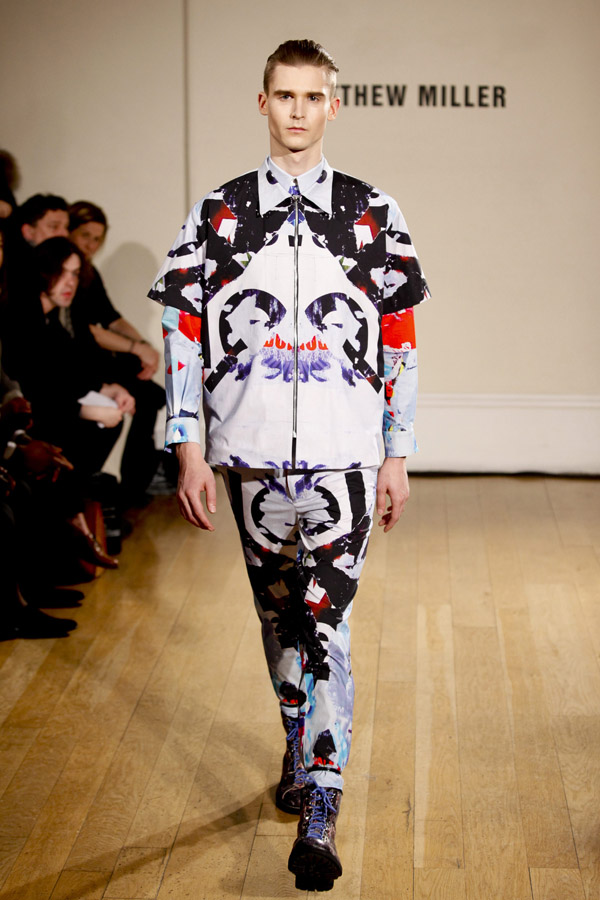 At London Collections: Men in June 2012, Miller introduced his Spring/Summer 2013 collection by stating, with somehow worrying words, that “to create authenticity, beauty has to be destroyed”. He also explained that the prints used throughout the collection came from CCTV imagery of social housing blocks designed during the apogee of Brutalist architecture. However, when the models took to the runway, the audiences sighed with relief at the highly beautiful and elegant manner in which the designer was able to introduce this message.

The subtlety of expressed meanings could be seen in garments with the laser-cut names of designers who took part in MAN and NEWGEN initiatives over the years as a tribute to the British fashion industry (particularly fitting in the year that it welcomed the inaugural London menswear fashion week). In addition, impeccably tailored garments revealed visible extended pleats in the back, suggesting a new vocabulary in the conservative lexicon of men’s sartorial realm. Despite this immense qualitative leap in Miller’s career, it was refreshing to see that the designer did not let go of his trademark features, such as using M33 carabiners in jackets and on the back of trousers. 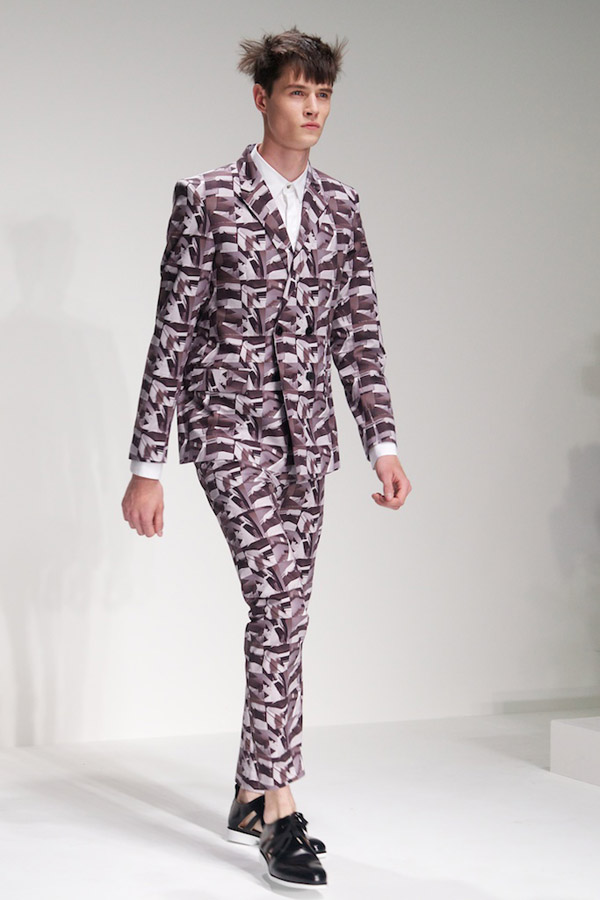 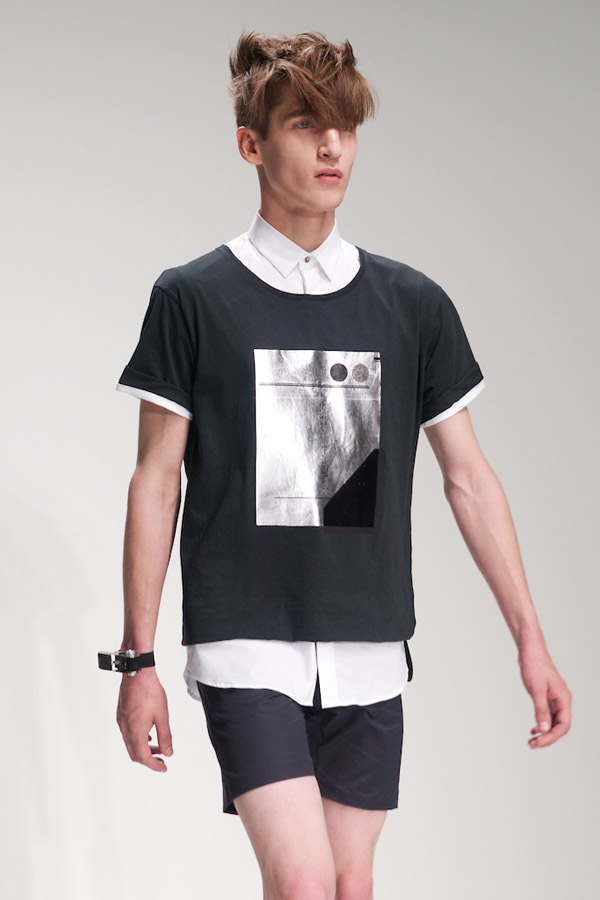 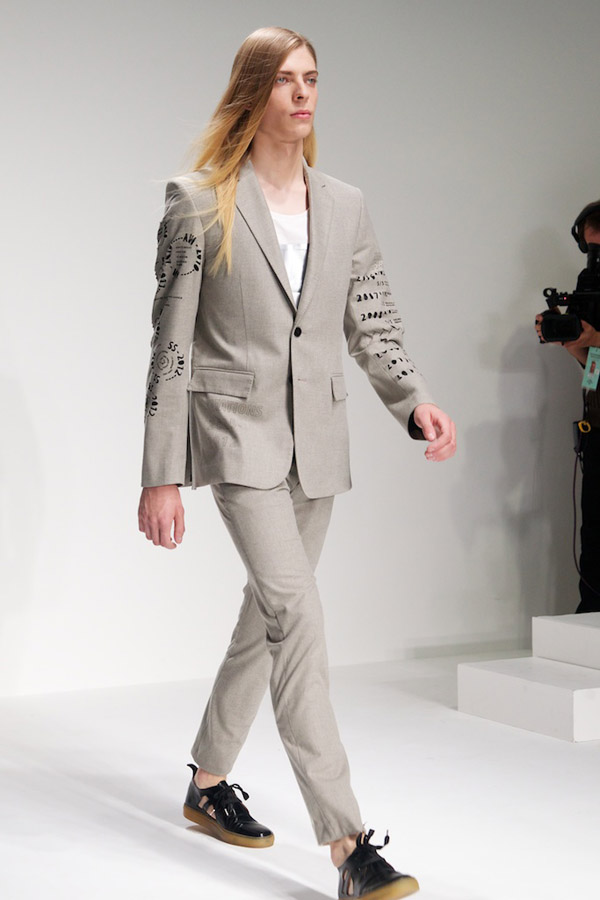 Overall, the collection revealed the influence of a minimalist and monochromatic tradition tinted by functional practicality. Suits were sharply tailored and occasionally deconstructed in the form of sleeveless jackets and fitted shorts, and boxy t-shirts in luxurious fabrics alternated with stylish knitwear and shirting. Adding to this impeccable collection, Miller collaborated with footwear label Oliver Sweeney to develop a range of whole-cut shoes and trainers defined by their unique and unexpected detailing.