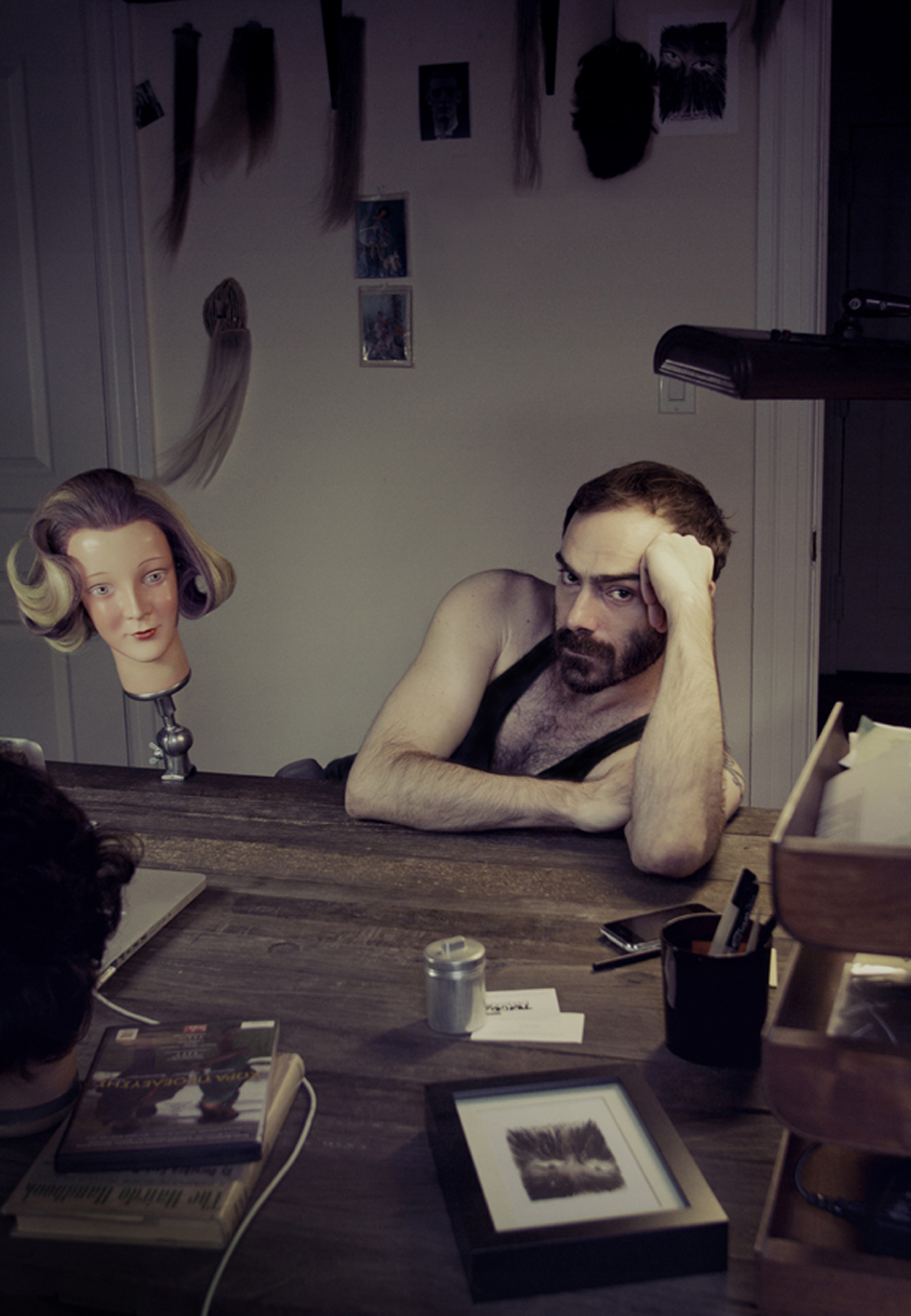 New York City is home of the hyphen, where model-actors mingle with producer-screenwriters over cocktails with heir-philanthropists, but perhaps Thanos Samaras has the most unusual hyphenate of them all: actor-hairstylist.  While working as an accomplished actor in Greece (he was twice nominated for the illustrious Greek Academy Awards), he was invited to style the hair for a cover shoot of Greek Vogue.  Since then, Samaras has moved to New York City, where he continues to act, while designing and styling hair for magazines including Vogue, Vanity Fair, and of course, Schön! – all of it just for fun.  Our Seymour Glass sits down with Samaras to discuss mullets, beauty for beauty’s sake, and stealing hair from his mother.

Is hair styling something you’ve always had an interest in, or is it something that grew on you while working as an actor?

Since I was a boy, I always sought refuge in movies, books, music, make-believe. I was a loner, and I’d create my own worlds in my room. I was very much into puppetry, the Victorian type, with the proscenium and the figures. I wrote the plays, made my actors, sets, costumes, composed the music score on a cassette. I was attracted to my one of sister’s dolls, a “European Standard Barbie”, infamous for their thinning hair. So I started making wigs for her and was struck by how that same blond doll was a completely different person wearing a dark Mireille Mathieu wig. At that point I discovered in a box, my mom’s childhood ponytail that she had saved when she got a Sassoon bob in the 60s, so I started stealing locks of hair from that and experimenting with bleach and oils, anything I could find in the kitchen that would have an effect on hair, obsessing with that material, how I could manipulate it to look majestic, forlorn. I eventually gave up being discreet about it, using up my Mom’s entire ponytail. From then on, I’d steal any human hair I could find, to support my habit – in secret!

What made you decide to go into hair after a successful acting career in Greece?

I had no intention in pursuing it. I was quite in my element making movies and on stage in Athens. I had gone to art school and trained as an actor at the Royal Academy of Dramatic Art in London. Three years ago, because of the economic crisis in Greece, my acting jobs were getting cancelled, postponed, or dragged on without fruition. I had plenty of time in my hands and when Greek Vogue asked me to do a cover shoot with them -after seeing the photographs of dolls I had been taking- it seemed like a fun thing to do. The model was Madisyn Ritland, who had been booked direct from Paris. I remember how before the first click of the camera, she looked up in the lens and something lit up in her. I started noticing how she touched things, handled the fabric, props, how she instinctively incorporated the different wigs I had made for her, to become different characters. That day, she inspired me to see that fashion was more than just selling dresses. I could create silent actresses. Now I live in New York, I have an agent for acting and an agent for fashion. I audition for films and TV shows and I do hair for magazines and campaigns. It’s a bi-polar combination but I make do.

How does your acting influence your hair artistry and vice versa?

Anything I do – from photographing a doll, to making a movie, making a girl, taking a shower, eating a meal, – I need artifice, there needs to be make-believe involved. I can’t stand real life and its vulgar little ways.

Are you more conscious now about how your hair is styled by other people when you act?  Do you ever feel the need to ‘touch up’ your own hair?

I haven’t let anyone touch my hair since I was 13.  An uncomfortable incident with a barber who made fun of me – I’ve been cutting my own hair since. Later on, creating my roles on stage and in films, I always insisted on doing my own costumes, hair, make up, props, always.

What is your personal sense of (hair)style? Classic, edgy, etc.?

My own hairstyle? In day-to-day life? The Average Joe. No style whatsoever. I try to go unnoticed.

Favourite hairstyle you never get tired of?

The mullet; but in vast variants and definitely not “ironically” referencing the hillbilly, or some such peudo-meta nonsense. I find it has a beautiful balance, a golden ideal, the many interpretations of the mullet; to the point where often people can’t even decipher the mullet-ian proportions.

Why the transition to the US? Looking for a fresh start with a new career or change of pace?

None of the above. Someone broke my heart to a million pieces and I just followed the wind.

What is it that you look for when choosing a new project?

With anything I do, I need to work with people I admire and who push me out of my comfort zone.

Do you find it difficult to maintain artistic integrity in a collaborative industry or have you learned ways to deal with this?

I don’t care for beauty for beauty’s sake; that’s my idea of ugly. It’s really about how you mix elements. The thing with hair is that it influences the look so much, and a lot rides on the idea and the execution of it. I am constantly trying to remain playful with the work because it keeps me inspired and not forget it’s not the cure for cancer, all while being very prepared with options and surprises in my armoury. Not for any other reason but to keep myself entertained. Fashion should at least be fun. 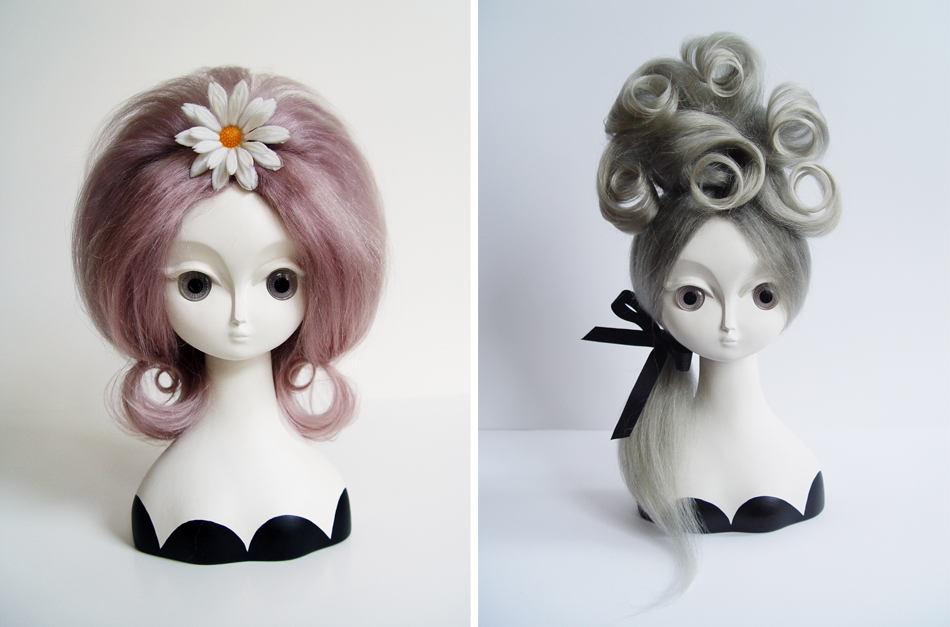 While working a lot in the editorial side of hairstyling, are you interested in celebrities?

Not anyone currently alive.

What are the most important habits for an artist, and what are some things you do to nurture your own creativity?

Constantly practising, researching, experimenting, listening to the universe, to the past, to the future. If you bang your head against the problem long enough, the solution will just materialise like out of ether. I turn to my idols, Serge Lutens, Jean Cocteau, Guy Bourdin, Georges Franju, for clues. And never abide to trends. Fuck trends.

Click the below links to view the newest Schön! Magazine
Schön! in glossy print
Download Schön! the eBook
Schön! on the Apple Newsstand
Schön! on Google Play
Schön! on other Tablet & Mobile device
Read Schön! online